From Israel: They Have Got to be Kidding!

As my readers know, I have been pondering for weeks exactly what is going on with the Trump administration’s peace team of Jared Kushner and Jason Greenblatt.  They have persisted in working on that “plan”: shaping it and refining it so that, we have been told, what is going to be delivered will be different from anything else that has ever been presented.

Why? I have asked.  Why are they going to this trouble when Abbas and company have been making it clear for months that they will have nothing to do with it?  Why has Greenblatt put out statements encouraging them to come aboard?
~~~~~~~~~~
On Friday, on the front page of the Jerusalem Post, above the fold, there was this headline:

Talk about stating the obvious. Are we to understand that this just occurred to them now?

A Trump official who was quoted said:

“Getting the right reaction is critical.  The substance of this is obviously extremely important, but releasing it at a time when the substance can be accepted by the maximum number of players or participants is just as important…. (Emphasis added)

It is difficult to imagine what sort of meaningful change might take place between Monday and Thursday, figuratively speaking, that would affect the plan’s acceptance, with one exception:

I would guess that Kushner and Greenblatt are eager to explore the question of how much longer it is likely to be until the failing and weak Mahmoud Abbas is out of the picture, and whether his absence from the scene would enhance the likelihood of success for their plan.

They would surely be told, then, that possible successors to Abbas are all as radical and hardnosed as he is. There is no moderate Palestinian Arab candidate waiting in the wings, ready to recognize the Jewish State and declare an end to hostilities.
~~~~~~~~~~
The report says that the plan may not be released until fall or later (there was some indication of disagreement among team members as to when to release it – although David Friedman has denied this).

Originally, it had been announced that Kushner and Greenblatt would be flying here this week to meet with officials in Israel, Egypt and Saudi Arabia, to “discuss some ideas” about how to move the plan forward and get the timing right.  Now it has been announced that they will stop in Jordan and Qatar as well.

This team is really working hard and seems deeply invested in the process.

Thus, at this point I relinquish my prior suspicion that this was merely a charade to mollify the Sunni Arabs.  If that were the case, they would release it, and shrug their shoulders when it was rejected.
~~~~~~~~~~
This is my take on what’s going on:

Kushner (shown below with the president) and Greenblatt are not naïve and are clearly not oblivious to the likelihood of the plan’s being rejected by the PLO.

However – and this is a big “however” – their boss, President Donald Trump, is intent on achieving success.  In fact, flush from his unexpected success with Kim, he is likely more determined than ever, and more confident that it can happen in spite of how the situation looks.  No one expected him to succeed with Kim, after all. 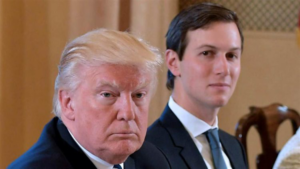 ~~~~~~~~~~
Kushner and Greenblatt are doing the best they can to deliver.  They may smile for the press, but their task is unenviable.  And I would venture to say that they are trying too hard.

Trump succeeded with Kim because he wasn’t wedded to success.  He was prepared to walk away, and, in fact, at one point cancelled a meeting because of how Kim had spoken.  Many analysts have observed that this is one of the key reasons why he was able to move things forward.

With regard to finding the solution to the intractable Israeli-Palestinian Arab conflict, the president is too invested.  His very determination shifts the dynamic: the Arabs, flouting their intransigence, are given control.
~~~~~~~~~~
As usual this past Friday, and thankfully so, we saw that what Hamas had threatened far exceeded what actually happened. But this does not mean the situation is satisfactory.  It is far from.

Hamas said their people would send 5,000 incendiary kites and balloons over the fence.  In the end, 20 fires were started, which is still 20 too many.

The one below was near Kissufim, yesterday. 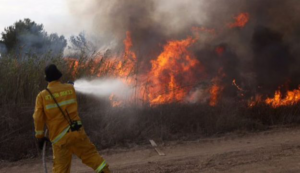 And this, beehives on fire: 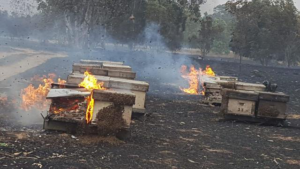 There has been much discussion here in the last several days as to whether those kites and balloons can be considered weapons.  This would mean that those launching them could be taken out like any other terrorists.  To my eye and, I suspect, yours, this is a fairly obvious situation.

But apparently there is concern about legal ramifications, particularly as there have been no Israeli deaths from the fires (thank Heaven).

Beehives on fire, while not causing the death of humans, can also make us weep for the wonton destruction of living creatures. The Israel Nature ‎and Parks Authority ‎says the impact on ‎local flora and fauna has been devastating, with one official referring to it as catastrophic.
~~~~~~~~~~
We are getting tougher (though not yet tough enough):

On Friday, infrastructure used by a cell that was preparing incendiary devices was attacked by plane.

In one instance, warning shots were fired at a cell preparing incendiary devices.  The IDF said there were only warning shots, but from Arab sources there were claims of two injured.

https://www.timesofisrael.com/idf-aircraft-fires-warning-shots-at-gaza-incendiary-balloon-cell/
~~~~~~~~~~
Early this morning the vehicle of a leader of one of the squads that launches the balloons and kites was attacked from the air.  No one was in the vehicle, and this was intended as a warning: we know who you are and can get you if we want to.

“…in recent weeks I have been leading the call that an incendiary balloon or an explosive balloon is like a Qassam rocket, and launching them is like launching a Qassam.

“My position is that one who launches an incendiary balloon or explosive balloon should be fired at as if he had launched a Qassam.”

I applaud him for his tough stand, which is so badly needed.  There has been unease about taking out terrorists when no Israelis have been injured or killed by the incendiary devices.  My prayer is that we should start taking them out before an Israeli IS injured or killed.  That possibility is drawing closer:

Earlier today a suspect explosive, carried by a balloon, was found on the roof of a house in the Negev Regional Council area.

https://www.timesofisrael.com/liveblog_entry/suspected-explosive-carried-by-gazan-balloon-discovered-on-roof-of-israeli-home/
~~~~~~~~~~
The Security Cabinet today demanded of the IDF that terrorists in Gaza who launch incendiary kites and balloons be shot.

IDF Chief of Staff Gadi Eizenkot told the Cabinet that there was a legal problem in defining all the kite launches as life-threatening, which would allow the IDF to use live fire against the perpetrators.

While a senior military source reportedly told the residents of the region adjacent to Gaza that “the alternative to kite terrorism is war, and if we react too forcefully, we can be dragged into escalation.”

This is a very troubling scenario with significant implications.  For this reason have I devoted considerable space to this story today, even as I know other stories are waiting to be told.
~~~~~~~~~~
The Shin Bet today revealed that it had discovered a massive terror cell organized by Hamas and had arrested its members in April, thereby averting a series of planned suicide bombing and other attacks.

The terror cell began operation in October of last year, and included roughly two dozen terrorists, almost all of them members of Hamas.

Perhaps the most important point to be noted here is that the cell was located in the Palestinian Authority-controlled city of Shechem (Nablus), in the Shomron.  Its leaders were both residents of Shechem (Nablus) and long-time members of Hamas.

The terrorists had planned a series of attacks across Israel.

And so, we can conclude that the Palestinian Authority is incapable of monitoring its own territory or does not care about planned attacks by Hamas (or both).
~~~~~~~~~~
Prime Minister Netanyahu this afternoon commented, in response to this news, that this is further evidence of the need for Israel to control all of the land “west of the Jordan.” 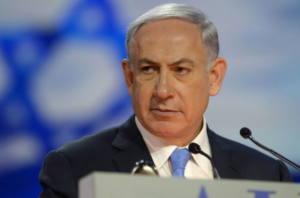 In other words: those who imagine we will relinquish this land for a “peace plan” are fantasizing.
~~~~~~~~~~
Let me complete this posting with a couple of very badly needed good news items.  There is always so much good happening here.  We must never lose sight of this.
~~~~~~~~~~
“Now, a group of researchers from Israel’s Ben-Gurion University of the Negev (BGU) have developed a new molecule that they claim inhibits the growth of cancer cells and reprograms them to act non-cancerous.”

http://nocamels.com/2018/06/reprogram-cancer-cells-bgu/
~~~~~~~~~~
This past summer, the third class of master’s students from a host of developing countries graduated from the University of Haifa’s pioneering international MA program in child development, one of the only fully funded programs of its kind in the world.

Eighteen professionals – including social workers, teachers, pediatric nurses, speech therapists, pediatricians and even one journalist – graduated from the program. They then returned to their homes in Uganda, Myanmar, Nepal, Liberia, Nigeria, Kenya, Ghana, Tanzania and other countries to implement what they learned in Israel.

“Israel is improving the lives of children at risk globally by training local professionals in this yearlong master’s program.” 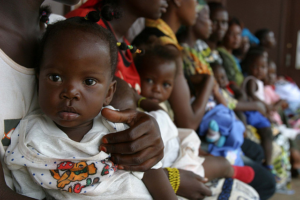