Today alone more than 70 rockets and mortar shells have been fired into southern Israel from Gaza, with the Iron Dome intercepting seven Grad Katyusha rockets headed for populated areas.

Five people have been injured, two — Thai workers — seriously. Others are suffering from shock.  Seven houses have been hit, with one damaged significantly.  Schools in the area are closed. 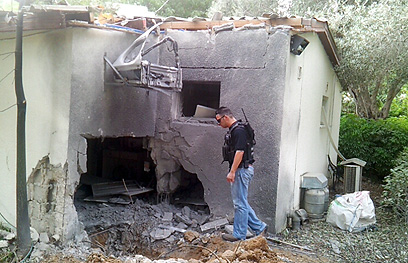 In addition, last night a bomb exploded at the border of Gaza, critically injuring an IDF soldier as he was doing a routine patrol near the fence.

The residents of the area, while determined to stick it out and refusing to leave their homes, feel as if they are living on the edge.  Their lives are disrupted and they have the sense that disaster could strike at any moment.

There are a million people — Israeli citizens — affected by this situation.

Here you see children playing near a shelter.  There is a 15 second period for getting to a shelter after an alarm sounds.

Israel has retaliated with air strikes against rocket-launching “operatives” and has killed four from Hamas.

Along with this retaliatory action, come the statements by heads of our government about how no one who attacks Israelis is safe.

“We did not start this recent escalation, but if it continues, we are prepared to go ahead with much wider and deeper military operations.”

“The IDF is strong and can do anything that the government of Israel decides.

“[it is] important that the government think before it decides. The next step will bring escalation, not containment. There is no way to accept terror coming out of Gaza. We are examining all the options.  If there is no other choice, and the fire continues, they will get hit hard. Nothing is impossible, including a ground operation if necessary.”

“There is no way to accept terror coming out of Gaza.”  But we ARE accepting it.  And I wonder how many other nations would tolerate such a situation.

“The next step will bring escalation, not containment.” A most unfortunate statement and not one that will serve our goals of deterrence.

It is not my place to determine exactly when a ground operation is called for — undoubtedly there are factors to be considered that I am not privy to.  Yet I know that it is only going to get worse in Gaza, as al-Qaeda grows stronger and more sophisticated equipment is brought in.  Already there are shoulder-launched anti-aircraft missiles there.

I also know that many in the south of Israel feel beleaguered, if not abandoned.

And so I came full circle and ask, “How much is too much?”