Late on Thursday night, men who are being presumed likely terrorists broke into the home of Shariya Ofer and his wife, Monique.  Shariya — a retired IDF colonel who had served as a commander of the elite Sayeret Shaked infantry reconnaissance unit — was bludgeoned to death by Arabs wielding iron bars and axes. 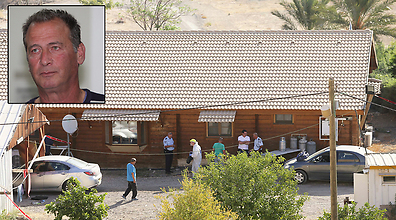 His wife, who ran to seek help, was moderately injured and is in the hospital.

The Ofer home is in the community of Brosh in the Jordan Valley.  The location is thought perhaps to not be a coincidence, as the Palestinian Authority is now claiming that all Israelis must leave this area in any settlement.

I want to point out here that it is not a question “simply” of murder — horrendous as it is — but a certain viciousness that is frequently the mark of Arab terrorists.  (I qualified above, in the interests of honest reporting, because it is being suggested that there is a small possibility that the motive here was criminal and not terror.)

Five Arabs from the PA area have been arrested on suspicion of involvement in this attack.

But the question at this point is broader: We’re seeing a spate of Arab attacks — each one, in and of itself, horrendous and totally unacceptable.  The linkage has been made between these attacks and the persistent, never-ending incitement coming from the PA, with PA officials refusing to explicitly condemn them.  The message is being given that at the highest levels of the PA this is an acceptable part of the “resistance.”

And yet… Israel continues to engage with the PA in these faux-negotiations. Engage with an entity that is most clearly not a partner for peace.  And so, the question is why?  And then, when will this end?

I share here parts of a superb interview of Khaled Abu Toameh that ran in Hadassah Magazine (with thanks to Chana G. for calling it to my attention).

Journalist Abu Toameh, a genuinely moderate Muslim Arab with Israeli citizenship, tells it like it is, with courage and integrity. For which I salute him.  Speaking Arabic, and in touch with Arabs inside the PA areas, he reports with an authenticity that is difficult to achieve from the outside looking in (all emphasis except for the Question lines is mine):

Q. What happened to the moderate Palestinian center?
A. Palestinians have been so radicalized that you will find very few Palestinians who will openly talk about making any significant compromise with Israel. No P.A. leader would dare to sign any agreement with Israel for fear of being condemned as a traitor. Israel has been delegitimized in the eyes of most Palestinians and this is the result of decades of indoctrination and incitement against Israel. This is true throughout the entire Arab world.

Ironically, this incitement intensified after the peace process began. The Palestine Liberation Organization leadership used the media, the mosques and every available podium to delegitimize and discredit Israel in the eyes of the Palestinians. By doing so, the P.L.O. has actually shot itself in the foot. P.A. leaders know that they have radicalized their people to the point where there are people who don’t want to hear about peace with Israel at all. I believe this is why [Mahmoud] Abbas will not sign any agreement with Israel. He simply doesn’t want to go down in history as a traitor.

Q. Is there anything Israel should be doing differently?
A. Israel is facing two camps in the Palestinian community. One is the radical camp that doesn’t believe in Israel’s right to exist and seeks its destruction. With that camp, there’s nothing that can be done. The second, less radical, camp is represented by some P.L.O. leaders in the West Bank who are unable to deliver [change or peace]. This is a camp that lacks grass-roots support. It has further been discredited due to its close relations with the U.S., Europeans and even Israel. So Israel is facing one camp that doesn’t want to deliver and another that cannot practically do so.

Q. United States Secretary of State John Kerry has tried to revive the peace process with multiple visits and public declarations. Can this break the logjam?
A. It’s a waste of time. You might be able to reach some sort of interim agreements with Abbas over certain areas that he’s actually in control of in the West Bank, but I doubt he’ll go even for that. Many in the international community see Abbas as a peace partner and this might be partially true, but so what? The question we need to ask is ‘Can this man deliver?’ What’s a peace agreement worth with Abbas when he can’t even visit his house in Ramallah that has been taken over by Hamas? The international community should go to the Palestinians and ask them to get their act together and start speaking in one voice and stop the indoctrination and glorification of suicide bombers. They must start preparing their people for possible compromise with Israel.

Q. Why is there such a pronounced Palestinian denial of Jewish history—from the Holocaust to the Jewish connection to the Temple Mount and Western Wall?
A. It’s part of the campaign to delegitimize Israel: [The message is that] the Jews have no historical attachment to this land. We are told…even by moderates that there is no such thing as the Western Wall; it is the southern wall of the Al Aqsa mosque. We are told that there is no such thing as Rachel’s Tomb. We are told that there’s no such thing as Joseph’s Tomb; it’s just the tomb of a Muslim sheik. And all the archaeological discoveries are fake. That Jews come at night and plant items at excavation sites and in the morning call a press conference to present these items as something that demonstrates a connection.

Q. What should Israel’s approach to peace be at this time?
A. Israel’s policy should be to talk to anyone who wants to talk and shoot back at anyone who shoots. I don’t see anything that Israel can do under the current circumstances. Some would say, ‘Why doesn’t Israel just get up and leave, unilaterally go to pre-1967 lines?’ I think that would be a recipe for another war. Any land you give to the P.L.O. will undoubtedly end up in the hands of Hamas and other extremists. We’ve been to this movie before and I’m not even sure the P.L.O. wants Israel to pull out of the West Bank, although they demand that in public. The P.L.O. knows that its survival in the West Bank depends on Israel’s security presence.

I sincerely wish I had time to address to other issues, but I do not.  As I indicated in my last posting…other matters have my attention at the moment. Please, curtail your communication with me until I begin posting regularly again.  It was important to me to share the above.  Will return to regular posting as soon as it possible — in particular with regard to Iran.