First, a correction:  When I wrote about the tragedy in Gush Etzion the other day, I accidentally wrote “Gush Katif,” which no longer exists.  Thanks to those readers who caught this.  Truth is, I have never forgotten Gush Katif (nor should any of us) and occasionally I slip and write about this Gush [“block,” as in a block of communities] rather than the one I intended.

As to the situation possibly getting better…

We haven’t had any murders of Jews at the hands of Arab terrorists for about 72 hours now, after several terrorist attacks in a row.  Does this means things are better?

Minimally so, perhaps.  The news reports yesterday were offering hints from military/police personnel about a slowly improving situation.  The improvement, we were told, was because of stringent measures that had been set in place: 2,000 more troops had been moved to problem areas in the field and were more visible, arrests were taking place.

Authorities – including Police Commissioner Inspector General Yochanan Danino – were saying that since 1,000 border police reinforcements had been brought into Jerusalem, the improvement in the security situation could already be seen. The reinforcements will stay in place as long as it is deemed necessary.

With regard to the last 72 hours, the fact that there were no murders does not mean that the Arabs have stopped trying to kill us.  In point of fact, there were two planned attacks that were foiled last night.

In one instance, a young Palestinian Arab from Ramallah, was hitchhiking at a junction outside of Dolev in Samaria, seeking a ride to Jerusalem.  An Israeli stopped and asked him where he was going: the Arab’s accent and halting response made him suspicious.  He drove off, and then contacted authorities.  Police came from Modi’in Ilit, searched his bag and found a large knife and screwdriver.  After questioning, the Arab admitted he had intended to go to Jerusalem to stab a bus driver.  He was hoping the driver would lose control and the bus would turn over, causing other casualties as well.

Please understand that when I refer to a knife, I do not mean a small paring knife for peeling an apple. Below you see the weapons this guy carried; The second Palestinian Arab who intended to attack was caught while walking outside of the Machpela (the Cave of the Patriarchs) in Hevron. Security personnel thought he was walking “suspiciously.”  This is important, as it means there was vigilance.  Security personnel asked him to lift up his shirt while he was still a few feet away, and saw a commando knife at his waist.  When the police cocked their guns at him, he threw the knife down; he was arrested.

Apparently Palestinian Arabs have shifted from driving vehicles into crowds to stabbing with knives as the preferred method of attack. Hey, not everyone has a car, but anyone can get a knife.

Of course, throwing of stones never goes out of favor as a means of attacking.  This particular incident made me quite furious:

Yesterday, a group of 10 and 11 year old girls from Kibbutz Sde Eliyahu (a religious kibbutz in the Beit Shean valley near Lake Kinneret) was taken by teachers on a hike to the Arbel Cliffs, overlooking the lake.  A group of 16 and 17 year old boys from Kfar Manda (an Arab town in the lower Galil) began pelting them with a barrage of rocks, injuring some of the teachers and some of the students.  One teacher required hospitalization.  And all of the girls were traumatized.

Police were summoned, but the information I have about what happened subsequently is insufficient.  I only know that the boys’ “guide” was taken in for questioning, at which point he “apologized.”  And that an investigation has been launched.

Please understand, we are not talking about Arabs in Israel illegally. These boys are Israeli citizens. Why were they not arrested on the spot?  Had the guide tried to stop them (tend to doubt this), or did he simply “apologize” after the fact?  Were there no other adults with the boys?

There must be enormous stringency in dealing with such cases.

That matter of stringency is a point that is being made over and over by commentators looking at the violence.  What has happened is that security forces – police, soldiers – have lost deterrence power: the Arabs who wish to initiate attacks are no longer afraid.

And there is one factor, connected to this, that is particularly worrisome:  There are youthful elements within the Palestinian Arabs community that apparently express “admiration” for ISIS:  Members of ISIS are seen as brave and fearless, and they may feel empowered by them.

I had no sooner encountered an analyst who wrote of this, then I also encountered this report:

An Arab boy in Jerusalem was stopped and searched because he looked suspicious.  A large knife was found on him (again, a knife) and he was arrested.

”During the arrest, the boy threatened the police saying, ‘ISIS and Hamas will take care of you.’” (Emphasis added)

With regard to lack of fear of police, I want to circle back to look at an incident of almost a week ago:  Last Friday night, in the Galil Arab town of Kfar Kanna, a young Israeli Arab  named Kheir al-Din Hamdan had an altercation with police that ended with his death.  There have been conflicting stories involving a stun grenade.  Apparently police came to arrest him, or an associate of his, for throwing such a grenade.  At some point he came after the car where the police sat, with a knife in hand. and banged with it on the car window – after which it seems he opened the rear door of the car.

The police report said they fired a warning shot at him first, and then shot him only when he did not respond to the warning and they felt themselves threatened. A video of the event, however, suggests that there was no warning shot and that the police erred badly.

As might be expected, riots ensued.  The police were accused of shooting Hamdan “in cold blood,” etc.

The first question to be asked, from where I sit, is how it was that a young man felt no compunction about coming at the police with a knife?  No fear. This is the loss of deterrence.

And then, how it is that the local Israeli Arabs saw rioting as an appropriate response to what happened?  Particularly considering the fact that Hamdan was involved with a stun grenade and then came at the police with a knife.

Netanyahu responded firmly to this situation, saying that we are a nation of law, and that the behavior of the mob cannot be permitted.  Some 16 rioters were arrested.

The police will investigate the situation, and, if it is found that there was a lack of professional judgment exhibited by the police, there will be repercussions (as indeed there should be).

But those questions underlying this situation still must be addressed.

I have certainly written about this before, but feel the need to do so again here: The failure of the international community to vehemently criticize the overt incitement by Abbas and his cronies or the behavior of the Palestinian Arabs who have chosen again and again to resort to obscene violence. Either there is total silence, or there is a politically correct attempt to be even-handed that, in fact, is a grave injustice to Israel.

We have, for example, UN Secretary General Ban Ki Moon, who expressed great concern about “the violence” (perpetrators not identified).  Following the tried and true formula for statements of moral equivalence, he called on all sides to show restraint so as to “avoid further exacerbating an already tense environment.”  I will refrain from further comment here.

I really disliked Catherine Ashton, EU foreign affairs chief.  But I have a sneaking suspicion that I may begin to miss her, now that she has been replaced by Federica Mogherini of Italy. 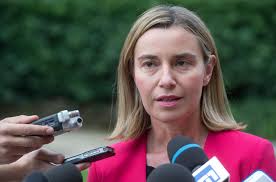 At the end of last week, after visiting Gaza, she pronounced, “We need a Palestinian state – that is the ultimate goal and this is the position of all of the European Union.  It is not only the people of Gaza that can’t afford having a forth war, all the world cannot afford it.“

Unfortunately, she neglected to address a few small matters, such as why she thinks a Palestinian state will prevent another war in Gaza (this is the major delusion), or why the situation in Gaza is so important to the world in the face of what’s happening in Syria, Iraq, etc. etc. It’s the same old over-emphasis on Palestinian Arabs to the neglect of much more serious problems in the world.  And, of course, if the world “needs” a Palestinian state, then surely she expects us to bite the bullet and make the concessions that will make such a state possible.  Watch for what comes next.

On Tuesday night, a mosque in al-Mugayir, an Arab village near Ramallah, was set on fire.  The villagers promptly blamed Jews living in the area, which is in Samaria (the Shomron).  “Only settlers would do this,” said the mayor.

According to one police source, however, this arson had none of the earmarks of attacks by Jewish extremists – no graffiti, for example.  Unfortunately, the police could not complete their investigation because they were not allowed by village residents to come in and do so.

Head of the Shomron Regional Council Gershon Mesika roundly condemned the arson, but said, thus far “no Jew has ever been caught setting fire to a mosque.”

This story is highly instructive on several counts.  I cannot state with any certainty what happened in this instance, but I can tell you that there have been other instances in which Arabs were shown to have damaged their own property and then blamed the Jews. The fact that the police were not allow to conduct a proper investigation does give pause.

Of course, what is most likely to make headlines is the accusation by villagers that Jews set their mosque on fire.

Kerry has come to the area to help calm down matters. Oh joy.  He met with Abbas and King Abdullah, and just now had completed a meeting with Netanyahu and the king.  I will save comment on this for my next posting, after Shabbat – if indeed what transpired is worthy of comment.

I have been asked by a reader to end my posting with something good. I used to do this, and then of late have been overwhelmed by the not-good news.  And so here I present something to make my readers smile:

Yehuda Glick is doing very well. So well, that he was able to pose for his first picture in the hospital, with his wife, Yafi: May he progress to complete recovery.