I must start with the breaking news, all of it obscenely ugly, before I go to what I had intended to write today:

A young woman, as yet unidentified, has been killed near the entrance to Alon Shvut in Gush Etzion – just meters away from where the three students were kidnapped this summer. Two others with her were wounded.

The terrorist – Maher al-Hashlamun, of Hevron, a released prisoner with Hamas associations – tried to get his victims by hitting them with his car first, and when he failed, he got out of the car and came at them with a knife. He was been shot by the guard at the entrance to Alon Shvut.  I believe he died on the way to the hospital.

This attack followed by only hours a terrorist attack on a soldier, also unidentified as yet, near a train station on Levinsky Street in Tel Aviv.  The assailant tried to grab the soldier’s gun and failed.  He then came at him with a knife, stabbing him so many times, according to a medic, that it was impossible to count the wounds.  He is in critical condition and undergoing surgery in Tel Hashomer hospital.

I ask your forgiveness, that I am reproducing a graphic picture here, but I am moved by my anger to do this. The terrorist in this instance, Nur al-Din, is a resident of the Askar refugee camp; reportedly he has Hamas associations, and was in Israel illegally.  He tried to flee the scene but was apprehended by a bystander and is in police custody.

Much more will follow on these two stories, but now I want to try to pick up on the theme I had intended for today’s posting: looking at the Temple Mount issue from a somewhat different angle.  I believe the connections will become apparent.  Please! read through to the end.

I recently wrote about the fact that King Abdullah of Jordan has been threatening to break Jordan’s peace treaty with Israel because of changes on the Temple Mount.  And on the surface this does seem to be what’s going on: the Jordanian ambassador to Israel was recalled for consultations last week, and now this week the king has given word to Jordanian officials that they are not to participate in what had been planned as a joint Jordan-Israel event honoring the 20th anniversary of the treaty.

But…as I previously indicated, there is more here than meets the eye – some solid ties with Jordan exist, ties that Jordan would prefer not be promoted broadly.  See what Robert Satloff wrote about the Israeli-Jordanian peace treaty – which he considers a “remarkable” document compared with the earlier Israeli-Egyptian peace treaty – shortly after it was signed:

“In the Jordan-Israel treaty, the concept of ‘partnership’ replaces the emphasis on ‘respect,’ while ‘cooperation’ replaces the focus on ‘security’…the peace treaty speaks only of an era of peace and joint efforts. Its contents are filled with mature, creative, and principled solutions to common problems; its detailed annexes focus not on security issues but on innovative ways to reconcile ‘Israeli private ownership rights within Jordanian sovereignty’ and to find compromise solutions to the problem of water resources.”

I wouldn’t say that the Israeli-Jordanian relationship has quite fulfilled the optimistic projections of Satloff that we would see a warm peace. But the point that Israel and Jordan have common concerns and a basis for genuine cooperation is very valid.  There are other areas of cooperation, but key is cooperative agreements regarding water. A joint Israeli-Jordanian Water Committee was formed; Israel agreed to supply Jordan with 50 million cubic meters of water per year, and allocate to Jordan 75% of the water from the Yarmouk River.

This is a matter of great significance for Jordan: I have been advised that Jordan “cannot” break the treaty because of its dependence on the water.

And, indeed, Abdullah Ensour, Prime Minister of Jordan, yesterday let it be known that Jordan was committed to the peace treaty and was not currently considering withdrawing from it.

We need, then, to take a closer look at what is going on.  And the first question to be asked is why – as there was cooperation between Israel and Jordan even before the peace treaty was drafted – it was deemed appropriate or necessary to advance the formal treaty in 1994.  (See the picture below, which reflects a warm interaction between Prime Minister Yitzhak Rabin and King Hussein of Jordan, at the signing on October 26, 1994.) 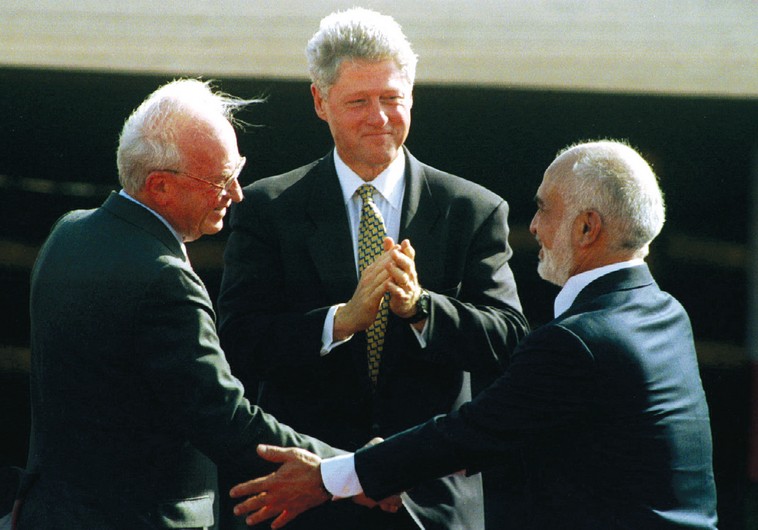 The answer is very enlightening.  Israel had already signed the Oslo Accords with the Palestinian Arabs, and was, in theory, negotiating a final status agreement.  The Wakf (Muslim Trust) on the Temple Mount had been Jordanian, but Jordan was afraid that, were there to be a peace treaty between Israel and the PA, it would be the PA that would be accorded priority on matters involving the Mount.

To preclude this eventuality, Jordan signed a peace treaty that acknowledged Jordan’s special status on the Mount.

Abdullah, king of Jordan, sits on his throne these days with great unease.  The Hashemites have always been a minority in the kingdom: until recently, Palestinian Arabs constituted the majority.  Now this situation has shifted because of huge numbers of refugees from Syria and Iraq. But in Amman, there is still a Palestinian Arab majority that makes Abdullah very uncomfortable indeed.  Thus said, it is clear that he cannot risk the ire of the Palestinian Arabs in his country.  To support Israel, to agree to changes on the Mount, would do precisely that. He must at all points seem to be taking a strong and critical stance with Israel.

This then is how I see the situation.

The prevailing wisdom here says that Netanyahu has agreed to maintain the status quo on the Mount so as to not risk the Israeli-Jordanian peace treaty.  But I would frame it differently.  I would say that he has insisted on maintaining the status quo so to avoid creating a situation that might cause Jordan’s monarch to fall, and allow Palestinian Arabs, Syrians, and Iraqis – many of whom are radical, jihadi – to come to the fore.  To act in a way that foments this would not be in Israel’s best interest.

I fervently believe in the right of Jews to pray on the Temple Mount and I believe the day will come when we will. But I also believe that to push it at this moment in time would be counterproductive.

It is worth considering a couple of very different attitudes between the Jordanians and the Palestinian Arabs with regard to the Mount:

Jordan claims the right to manage the Mount, but is not calling for Jordanian sovereignty there. The Palestinian Arabs indeed do call for sovereignty there: They say Israel must move back behind the ‘67 armistice line, which would leave the Mount totally in their hands.

Jordan says that while Jews cannot pray on the Mount, they can be there.  Abbas has come out saying that Jews have no place there at all.

There must be different policies, then, with regard to how Israel responds to Jordan and to the Palestinian Authority.  The enemy is the PA, and this must be said unequivocally and boldly.  I have written about how we must stand strong for who we are, and I believe it is against the Palestinian Authority – against Abbas and his cohort – that we must focus.

What is needed is a very pointed exposure of the horrendous incitement of the PA – an incitement that has caused Jewish deaths.

Fatah, the party of Mahmoud Abbas, blatantly promotes terrorism on its Facebook page.  This cartoon is from Fatah’s official page: 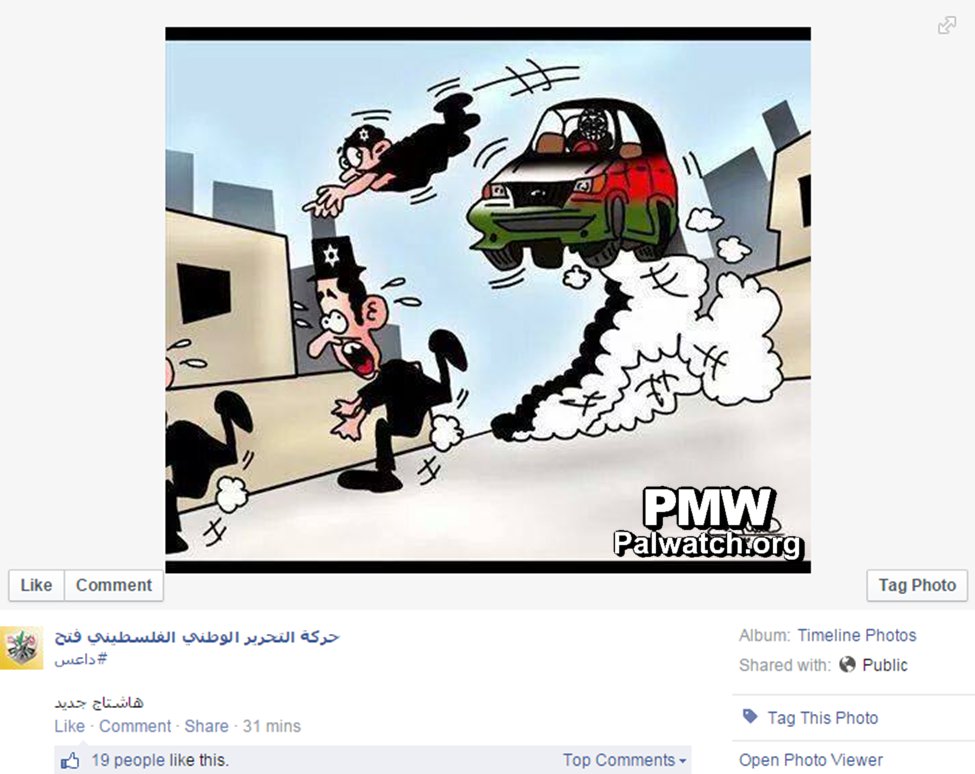 The main Fatah page of FB just days ago had the post: “Run over, friend, run over the foreign settler!”
Another said: “The Jews are defiling Al-Aqsa – will you not rage??”

Abbas himself wrote a condolence letter to the family of the terrorist who attempted to kill Yehuda Glick.  In it he described the terrorist as a “Shahid” – a Martyr who “rose to Heaven while defending our people’s rights and holy places.”

The PA National Security Forces posted a cartoon depicting Israel as about to rape the Al Aksa Mosque, represented by a woman.

You can see all of this and more on the Palestinian Media Watch site:  http://www.palwatch.org/

Perhaps worst is this song, which has become a big hit on Palestinian Arab social media, and is fueled by the charges of Abbas:

‎“Wait for them at the intersection. Let the settler drown in red blood. Terrorize them.”

We have a huge task in front of us, here in Israel, in order to eliminate the murderous scourge that confronts us.  We are very angry, and I believe we will.  I will follow with reports on the situation over time.

“I have instructed that the full severity of the law be enforced, including the demolitions of terrorists’ homes and other measures…”

This is a mere beginning.

But each of you can act on behalf of Israel now, as well.

First, please! publicize the incitement of the PA. The world does not know, or choses not to know.

Put out calls in a variety of venues for the Palestinian delegation to be kicked out of the UN until the incitement to kill Jews ceases. Demand that the US stop providing funds to the PA until the calls to kill Jews stop.  (With thanks to Ruth Lieberman here.)

You know the drill: Write letters to the editors of your papers, submit op-eds, post this information on your Facebook pages.

I have not yet addressed the vile and immoral silence of the world on this, and will come back to it.