First, an update on little Zakkai, for whom the prognosis is excellent, but who is having a very hard time — as are his parents.  At this point he’s cranky and miserable.  And who can blame him? There’s only so much, if anything, that you can explain to a toddler about how it will get better and how the nasty procedures he’s enduring are necessary.

I believe he’s past the very worst of the post-surgical pain, which required a host of medications including morphine. And he no longer has to tolerate multiple IVs.  So, even though he doesn’t realize it, he’s getting there.  The main problem now has to do with the fact that the surgery punctured the barrier protecting the thoracic cavity, which houses the lungs.  This has caused “pneumothorax” — air in the space between the lungs and the chest wall, which creates pressure on the lungs so they cannot expand fully.  The solution is a very uncomfortable suction tube that draws out the air.  Tests so far have indicated it must still be used.  But hopefully not for much longer…

And then, a bit of clarification with regard to possible dates for these elections.  The High Holidays begin in mid-September, not October as I erroneously wrote yesterday, and end mid-October.  The coalition, and Likud in particular, are seeking elections before the holidays.  Other parties would prefer that they be mid-October, after the holidays — which gives them more time to prepare, time Likud would prefer they not have.

It’s easy to see why Likud wants to seize the day, as it were, and take advantage of the enormous lead they currently are showing in the polls: According to a Dahaf Institute poll released yesterday, Likud would garner 31 seats — compared to its current 27, while Kadima — which has 28 seats now — would fall all the way back to 10 seats.

With 17 seats, Labor would become the second largest faction.  Currently the Labor party, headed by Shelly Yachimovich (below), has 8 seats.  Remember that 5 people from Labor, including Barak, broke off to form the Independence (Ha’Atzmaut) party, which, the poll now indicates, would not make the electoral cut-off for getting into the Knesset.

Third largest party would be Avigdor Lieberman’s Yisrael Beitenu, with 13 seats, down from its current 15.  And following this would be Yair Lapid’s new party, Yesh Atid, with 12 seats, and then Shas, which currently has 11 seats, down to 8.

The same poll, however, shows that 67% of the people do not believe an election is really necessary now.

Benny Begin, who is a minister without portfolio, is the first one, and perhaps will be the only one, in the government to concur publicly, saying that early elections are a “mistake” because the coalition has been so stable.

According to the Times of Israel, MK Yitzhak Vaknin of Shas said: “If you held a secret ballot, 118 [of the 120] MKs would vote against early elections.”  Don’t know if the number would be that high.  The point is that not everyone is in favor, by a long shot.  But if people are not speaking up, it becomes moot, as party leaders have given the nod for elections.

One of the questions that comes to mind with all of this is how it will affect Israeli government policy on/and readiness to act against Iran.

Defense Minister Barak says there will be no effect.  Writing on his Facebook page, he declared:

“Elections will not affect deliberations of the professional echelon [on] everything regarding the Iranian issue.” Military force was still among the “options on the table.”

Minister of Security Affairs Moshe Ya’alon reflected the same approach in a statement to Ma’ariv:

“The election will not be a consideration in the Iranian issue. If we need to make decisions we will make them.”

I’d like to believe this — that politics won’t affect security decisions, but it’s a bit of a stretch.  There are so many potential factors to be considered.

One source suggests that Netanyahu would be reluctant right before the election to initiate a strike on Iran that might bring retaliatory rockets from Hezbollah onto the northern population.  Another source says there are precedents for a major military strike prior to an election.

Maybe Netanyahu wants the increased strength and credibility of a large election victory in order to bolster himself — domestically and internationally — before he takes action on Iran.  Maybe he has promised Obama (this would be under duress) that he won’t act until after the US elections, so our elections are irrelevant in this regard.

Another question, and it’s a huge one, is what sort of coalition Netanyahu will put together following elections. A great deal rests on this.

Coalition Chair, Ze’ev Elkins, one of the really good guys, is worried.  He has told Arutz Sheva that:

“…the [Likud] party may have an interest in elections, but for the state elections are not the best thing, and I think that for the right wing they are not good.
“The current coalition is the most right-wing one that I can see on the horizon. I am afraid that the next coalition will be less nationalist, or that the specific weight of the nationalist forces within it will be less than what exists in this coalition.”

Minister of the Environment Gilad Erdan disagrees.  Arutz Sheva quotes him as saying that “the larger and stronger the Likud is, and the less dependent it is on its coalition partners, [the more] it will be able to stand firmly regarding its ideological positions, and not – as we saw in the past, regrettably – do things that do not reflect the Likud ideology.
“The stronger Likud is, the more we will be able to explain our right to this land in a strong and clear fashion…”

But it all depends on who is in the coalition.  Elkins is concerned that Kadima, under Mofaz, will join, as will Yair Lapid’s new party, thus diminishing the relative weight of the Likud faction.

These are the sort of news items — among many others — that make me highly dubious about the success of sanctions against Iran:
[] “The Islamic Republic News Agency, reporting this week from Beijing, says that the Chinese Shipping Association has announced that it guarantees the transportation of Iranian oil tankers.

“China is a big importer of oil especially from Iran, therefore Chinese ministries of finance and transportation, Chinese commission of development and reforms and insurance companies are to insure and guarantee transportation of Iranian oil tankers.”

[] The state-run General Insurance Corp. of India (GIC) has announced that it will provide third-party liability cover of up to $50 million for ships bringing crude from Iran.

“India, which depends on imports for about 80% of its energy needs, buys 14-15 million tons of crude oil a year from Iran…”

[] In spite of a UN arms embargo, Iran managed to import over $560 million in weapons over a three-year period. This is according to The Telegraph (UK), which has secured data from the Stockholm International Peace Research Institute.

“If you are an unscrupulous government, it’s quite easy to find your way around them.”

In light of all of the above, news coming out regarding Iran’s expectations for the next round of negotiations is nothing short of sickening:

“Iran has made no secret of its hopes for the next round of nuclear negotiations with world powers: Pledges by the West to ease sanctions as a step toward deal making by Tehran….

“Iran has been careful about avoiding ultimatums in a possible sign that it sees the meeting scheduled for later this month in Baghdad as a stepping stone, not a showdown.”

So far the US has rejected the idea of reducing sanctions as a confidence building measure, but I’d be less than honest if I said I wasn’t nervous about this possibility.  Hillary Clinton talks about a negotiating process. What I see is Iran conceding some small point, and then the US crowing about this and making that gesture, even though what has been conceding is sorely insufficient.

In the mixed Arab-Jewish neighborhood of Abu Tur, yesterday, a bus carrying children aged 3 – 13 was set upon by local Arabs throwing cinderblocks.  The driver sped away — no one was injured but the bus was damaged.

In cooperation with the New Wave Research institute, Israel Hayom conducted a special poll last week for Independence Day.  The results are heartening:

Amongst the representative sample polled, 93% are proud to be Israeli and 70% are very proud. A full 80% would rather live here than anywhere else.

Gives a perspective that is different from that of most news reports, doesn’t it?

Jerusalemites, those over 55 and the religious are happiest.

An ancient seal, dating back roughly 2,600 years to the time of the First Temple, has been found near the Temple Mount in Jerusalem.

It bears the name Matanyahu in Hebrew. 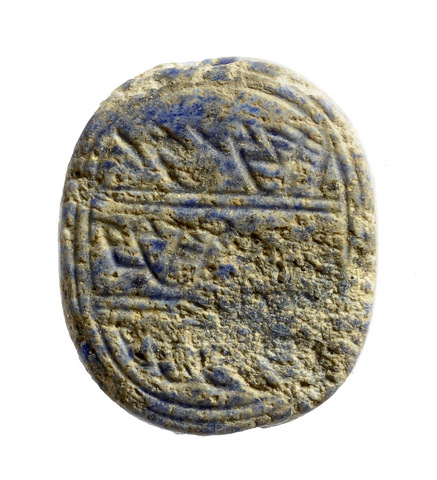