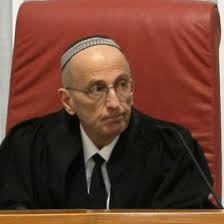 Levy was born in Iraq and came to Israel with his family when he was 10.  Roughly a decade after becoming a lawyer and opening a practice, he was appointed as a military judge.  Subsequently, he moved to the Kfar Saba Magistrate Court, and then to the Tel Aviv District Court.  In 2000, he was appointed to the High Court, where he remained until his 2011 retirement.

Levy had a sterling reputation for integrity and sensitivity to the common man.  He was said to be devoid of the elitist mentality that affects many on the High Court.  As a traditionally observant Jew with a right wing political orientation, he was considered an anomaly within the more leftist and secular High Court culture.  In certain circles he was revered for this orientation.  It should be noted that he was adamantly opposed to the disengagement (sic) from Gaza.

For all of this he has earned our respect and admiration.

When all of this is said, however, what Edmond Levy has been best known for in the last couple of years is the major report that bore his name: this is his legacy.

In January, 2012, Prime Minister Netanyahu appointed a committee to examine the status of Israeli building in Judea and Samaria. Levy headed the committee, and was joined by international lawyer and former ambassador Alan Baker and Tehiya Shapira, retired Tel Aviv District Court Judge.

After two decades of Oslo thinking, which had shifted the mentality of many in the government towards the Palestinian narrative, this was a brave conclusion, long over-due and of huge importance.

We have it on good authority, that when the prime minister first received the Report, he was positive about it. But then he took the measure of the left wing opposition he was going to face, and tabled it. It was never even brought before the Ministerial Committee on Settlements for discussion.

In the late fall of 2013, I began, with co-chair Jeff Daube, a major campaign to promote Israel’s legal grounds in Judea and Samaria (http://wehavelegalgrounds.org/).

The Levy Report has been a key part of the documentation we are using in the campaign.  Thus am I keenly aware of Edmond Levy’s efforts: I feel a special appreciation for his contribution and believe that the nation owes him a debt of gratitude.

There is talk in many quarters now about renewed efforts to promote the adoption of the Levy Report.  I think that would be the very finest way to honor his memory, while serving Israel at the same time.

May Edmond Levy’s family be comforted among the mourners of Zion and Jerusalem, and may his memory be for a blessing.