Last night, I had written my post, which spoke about my unease regarding the possibility of US support for the Fatah-Hamas unity government.  What I said was:

“Kerry, while expressing concern about Hamas, has had communication with Abbas and will be meeting with him.

“He is saying the US will not accept the unity government ‘initially’. Not encouraging. He’s saying, ‘Convince me, guys.’”

Well, it seems that when Kerry said “not initially,” he meant they would wait two or three hours. I sent out that posting, turned back to check the news one last time for the night, and found that the Obama administration had announced a decision to “work with” the new unity government.

There was not even a pretense of assessing the new government before making a decision. That decision was made up front.

And so, no, I am obviously not surprised that this is the way the US administration decided to go.  But I am shocked at the alacrity with which they signed on, without a semblance of serious consideration of the potential problems.

What I felt – this was about 1 AM – was the degree to which we are confronting an enemy in the White House. Also not new, not a surprise.  (Don’t write, please! to ask me, didn’t I know?)  But this was so “in our face.”  This decision to immediately give support to a government that includes Hamas – a terrorist entity dedicated to Israel’s destruction.

Meanwhile, Congress is looking seriously at cutting funds to this new unity government. Members of Congress are none too pleased with the decision of the White House/State Department.  I will have a great deal more to say about this in coming days.

Deputy Minister of Defense Danny Danon yesterday referred to the US decision as a matter of “moral choice.”  And indeed, right he is. There is a question of US law – which actually prohibits support for a terrorist entity – and then the question of what is simply right.

It is, I recognize, foolish to talk about moral decisions and the Obama administration in the same breath.

The government of Israel is quite furious at this decision and has voiced grave “disappointment” in the US.

The Security Cabinet has announced it has “formed a team to consider plans of action given the new reality that has been created, and ahead of diplomatic and security situations that will be created in the future.”

Among the various responses under consider is partial annexation (e.g. of the Gush Etzion area), although this would not happen immediately.  According to a JPost article, it would not happen before the projected unity government elections.

My thought here, then, is Hey! Here we are again with a perfect example of why the Legal Grounds Campaign is so important. It lays the legal groundwork for decisions on annexation that may follow.  It provides strength and an attitude of certainty with regard to our rights.  Right now, in spite of such proposals for annexation, support is insufficient.  Please! will those of you who care, and are willing to help us fight this fight during this window of time, contact me.

Among the things the Israeli government has already decided is to make commuting between Gaza and the PA areas of Judea and Samaria difficult, and to prevent voting for the unity government in eastern Jerusalem (most Arabs living there hold residency and not citizenship cards, and would want to be counted in the PA polity).  With this, there will be efforts to prevent Hamas participation in elections in Judea and Samaria.

There is talk, as well, about holding back money Israel collects in taxes for the PA.  There is always talk about this, is there not?  There seems to be a reluctance because the PA screams that they will collapse without this money, and we are causing people to suffer, etc. etc.  But the PA still owes us a large fortune for electricity.

I will have a great deal to say about Israeli responses in coming days, without question.

Khaled Abu Toameh has written an analysis of what issues are still to be dealt with, with the formation of this new government.  As the article says: Explosive issues are left hanging in the air.  These issues involve not only the elections, but the melding of security forces and more (emphasis added):

“It’s also unrealistic to believe that PA leadership would rush to add tens of thousands of Hamas employees to its payroll, especially in wake of the economic hardships facing the government.

“On the other hand, those who think Hamas would allow Fatah-dominated security forces to return to the Gaza Strip as a result of the April 23 reconciliation pact are living in an illusion.

“For now, both Hamas and Fatah prefer to avoid answering questions that could spoil the euphoria over the ‘historic’ decision to end their differences.”

In line with Abu Toameh’s comments, it is worth noting here that outgoing Hamas prime minister Ismail Haniyeh, on the day when the new government was sworn in, declared:

“I am not concerned about the resistance; it is in good condition. Today there is an army, in the form of the Izz ad-Din al-Qassam Brigades — it is advanced and the resistance is advanced.”

Israeli intelligence estimates that Hamas has some 10-12,000 rockets. Paraphrasing Abu Toameh, anyone who expects Hamas to surrender its position of “resistance, is floating in the stratosphere.

I leave further analysis and deeper sharing of information to another day. For tonight begins the holiday of Shavuot, and it is time to turn my focus to other, more eternal, matters.

Shavuot, a harvest festival, marks our receiving of the Torah at Sinai.  We counted seven weeks from the time of Pesach, to reach this point.  Now it is time for joy and celebration – and the tradition of study through the night.

We must turn to the One who graced us with the extraordinary and eternal gift of Torah, and not count on the good offices of men and women.

To all who will be celebrating, I wish a Chag Shavuot Sameach! 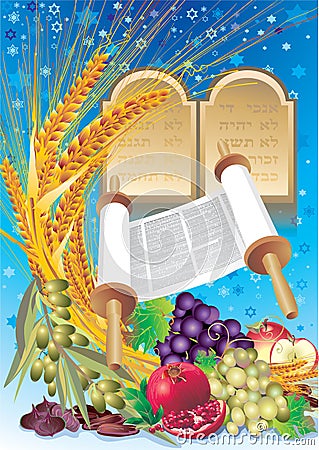