At the beginning of Barack Hussein Obama’s first presidential campaign, I had enormous unease about who he was and where he would take the country. I wrote about this unease in a posting, in terms that were quite mild.  Back shot a furious response from someone I had known in America.  She declared in righteous tones that she had worked for the civil rights movement in the 60s, and no one was going to stop her from voting for a black man for president now.

I told her she was a racist.

She was not assessing Obama’s qualifications for office, but instead opting to vote for him because of the color of his skin.

My unease proved prescient, as Obama has turned out to be an horrendous president – weakening America in multiple ways.  After his first term in office, I was sure the voters would deny him a second go-round in the White House.  With everything else, it was the time of the scandal of Benghazi. But he was voted in again.  My bewilderment was great: how could the American electorate fail to see his presidential failings?

I found my answer in the response of my correspondent of four years earlier: Many simply could not conceive of rejecting a black president – for millions of voters, this seemed a morally reprehensible thing to do.  In a secret part of themselves they would have felt like racial bigots.

Of course, Obama and his supporters nurtured this thinking at every turn, ultimately turning back the clock on race relations in the US.  When Prime Minister Netanyahu accepted an invitation to come to Congress to speak about Iran, President Obama was mighty displeased. The Black Caucus in Congress then boycotted the prime minister’s talk because he was being disrespectful to the black president.  What in Heaven’s name did race have to do with the issues at hand?

DO NOT REPEAT THE MISTAKE!!

This week Hillary Clinton was nominated as the presidential candidate of the Democratic party. 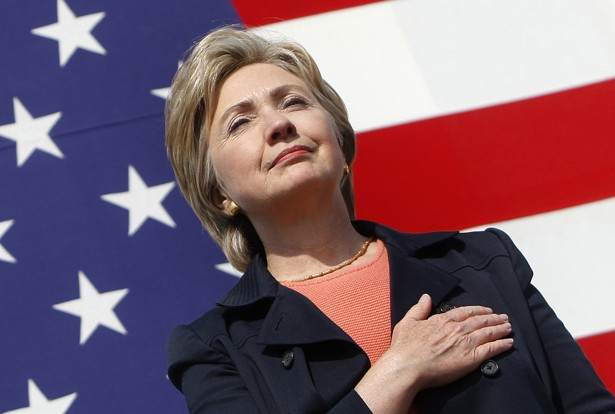 She speaks repeatedly about how she has now cracked the glass ceiling.  That’s the invisible barrier that has prevented women from going all the way to the top.  If she is elected, she will have gone through that ceiling.

That’s the line Michelle Obama delivered: now her girls and all American children know that a woman can be president.  Here again, we see the suggestion that voting for Hillary is a “good” and a “progressive” – a morally elevated – thing to do because it advances equality in the nation.  This time it’s gender equality, and the unspoken but potent accusation is that failing to vote for her would be a backward, a sexist thing to do.

But here’s the rub: Hillary’s female “plumbing” qualifies her for the presidency no more than Obama’s black skin qualified him.  She must be judged on her character, and on her accomplishments to date, and on the positions she espouses.  In all of these respects she fails the test. I will begin today and come back to explore this many times, in many ways in the weeks ahead.

The greatest irony is that Hillary is herself no champion of women, no stalwart defender of their dignity and their rights.

Critics are saying that Bill Clinton’s speech at the convention in great praise of his wife was masterful – the old Bill in true form.  Perhaps it was that, but it was also an exercise in deceit and myth-building. He portrayed a loving marriage.  But the elephant was in that convention hall. In fact, there may have been a whole herd of elephants there. The Clinton marriage is a shell of a relationship, sustained for political expediency.  She opted to remain at his side in spite of the outrage of what has been referred to as his “hound dog ways,” thereby providing him with political cover.  A concern for the vile manner in which her husband demeans and humiliates and uses women was notably absent from her decision.  She was and is, in fact, a classic enabler.

And now – in a hypocritical “do as I say and not as I do” moment – she lists among the goals of her campaign stopping campus sexual assault.

Do you see an honesty and integrity here that makes you want to support her?

There is likely no one reading this who does not know of the scandal of the emails: Hillary’s use of a private server for official governmental email correspondence, failure to protect confidential material, risks to the security of the nation, etc. .  But some of you may have been reassured by statements Hillary and her staff made regarding this situation.  And further reassured by the fact that the decision was made not to indict her for what she has done.

I ask, now, please, that you see this C-Span clip of Rep. Trey Goudy (R-S. Carolina) questioning FBI Director James Comey during a meeting of the House Oversight and Government Reform Committee. Give it three minutes of your time – it’s important:

Now, once you’ve seen it:

Do you believe that Hillary Clinton behaved in this matter with an honesty, integrity and concern for American security that makes you want to support her?

Then there is the matter of corruption inside the Democratic National Committee. As a result of emails that were secured when the DNC was hacked and then provided to Wikileaks – which released tens of thousands of them – it became apparent that there had been a bias demonstrated by member of the Committee, working to advance the candidacy of Hillary Clinton over that of Bernie Sanders.

This is not supposed to happen – although the fact that it did is hardly shocking news. Sanders supporters were enraged.

The first thing I found interesting is that Hillary, when interviewed, said she really couldn’t address this issue because she didn’t have knowledge of what was going on.

And then, two things happened.

As a result of what had been exposed, DNC Chair Debbie Wasserman Schultz, who was responsible at the top and certainly complicit, resigned from her position.

And what did Hillary do almost immediately?  Instead of distancing herself from Wasserman Schultz, she appointed her as honorary chair of her campaign.

What does this tell us?  Does it seem to be a smart move?  A clean one?  Are you comfortable with it?  Is this Hillary honoring Wasserman-Schultz as reward or compensation for her having taken a hit on the leaked emails?

There have been charges, apparently backed by some solid evidence, that the Russians, or someone connected to the Russians, did the hacking.

But the Clinton campaign carried it one step further, saying that the Russians did this at this time specifically because it would help Trump, and this was an outrage, as it represented foreign interference in the election process.

What I found most revealing (and ironic) here is that the Democratic campaign focus was on the inappropriate behavior of the Russians, who allegedly sought to influence an election.  There was no expression by Hillary that I could find of regret that the DNC also apparently tried to influence elections.  Her campaign deflected away from this, speaking about what the Russians did and not what they exposed.  Had there been nothing to expose, the Russian release of emails would have been devoid of import.  Think about that.

Does this entire process sit comfortably with you?

Lastly for today, I want to look at what has gone on inside the convention hall and immediately outside.

Inside, there were Palestinian flags. 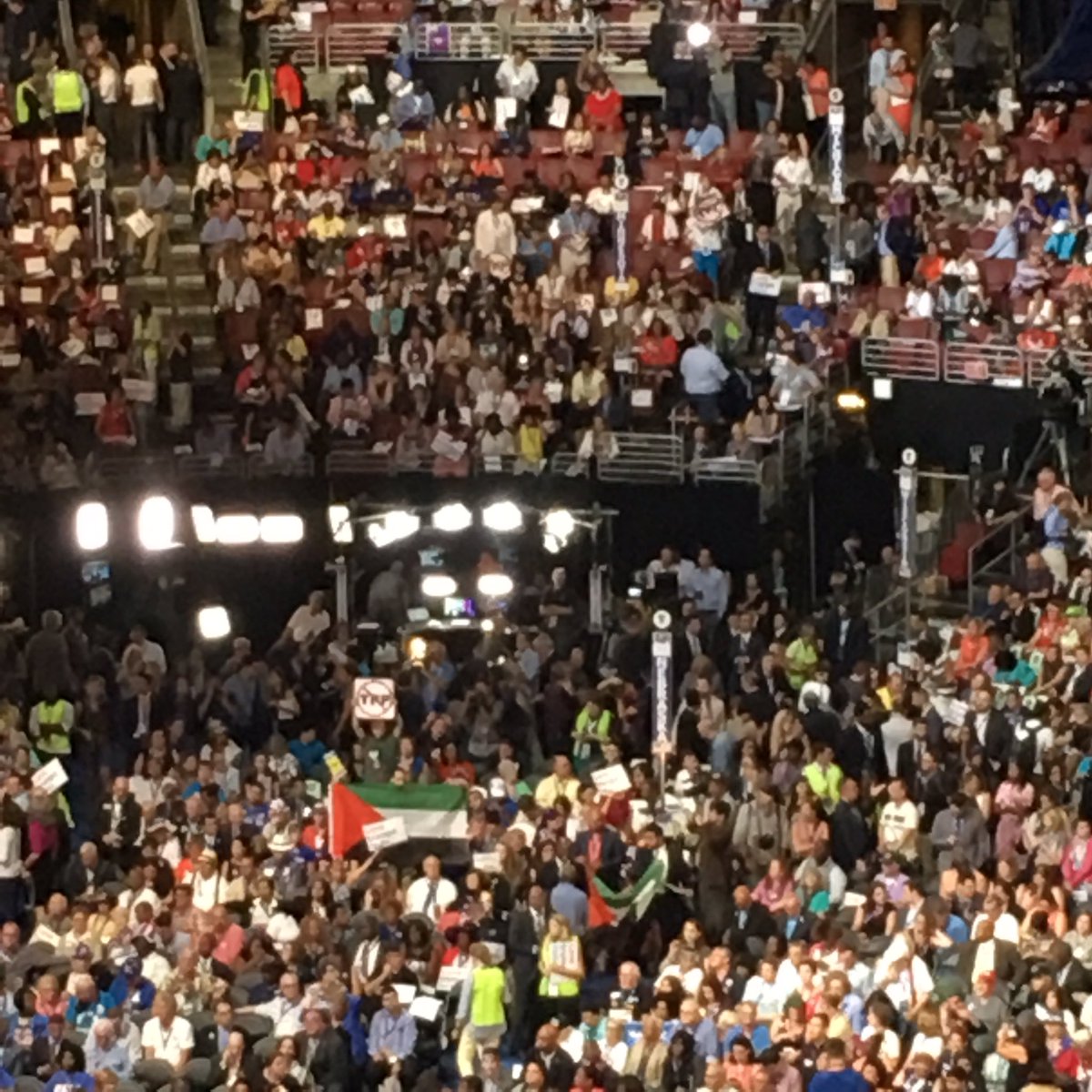 What this tells us is that the Democratic party is moving hard left. The joke here is that these flags are being displayed upside-down: the black portion belongs at the top.

Outside the convention hall was much worse:  Both American and Israeli flags were burned. 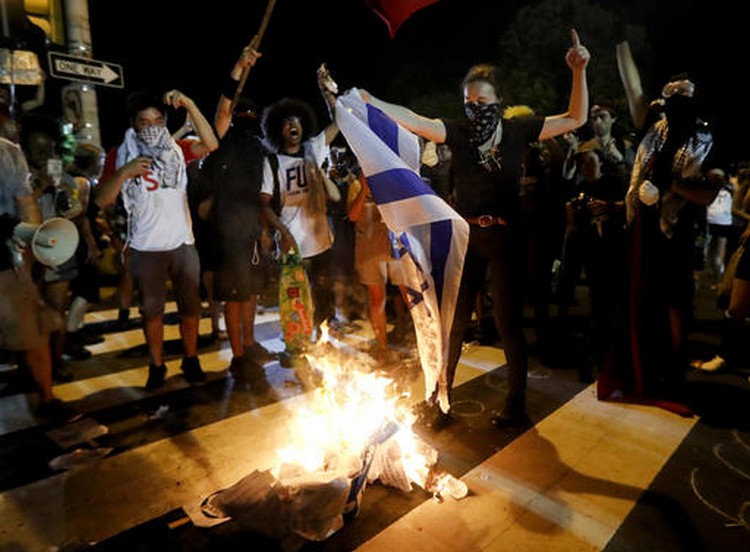 “”the Democrats are attuned to the potent symbolism of flags. Why, then, have the Democratic National Committee and its presidential nominee, Hillary Clinton, failed to condemn the desecration of the American and Israeli flags and the glorification of the Palestinian intifada [which calls for violence against Israelis] mere feet away from their convention hall?’

“’Their silence is deafening,’ he said.” (Emphasis added)

Are you comfortable with Hillary’s silence on this?

And so we begin, my friends.  I want to ask you now, and every time I write about the campaign, to share this very broadly.  Send it out to others, put it on your Facebook pages and ask that people share. Write letters to the editor drawing on some of this material.

If you care about America’s future, please, become an activist on the issues now and remain so until November.

I am giving this focus priority because I believe I must. Perhaps next posting we will look at what’s going on here.