Above we see stones that were thrown down from the Temple by the Romans at the time of the Destruction 2,000 years ago.  They have been left as a reminder – even as plazas and an archeological park have been built up around the supporting walls of the Temple Mount.

There are some who say we should not be mourning any longer, or should fast just half the day, for Jerusalem, which we are mourning, is in our hands again and rebuilt.  We have that archeological park, and the plazas, and an ever-growing and beautiful city.

There is a truth to this, but also a great fallacy.  I believe it was Rabbi Shlomo Riskin who said we should substitute Har Habayit [the Temple Mount] for Jerusalem in our prayers today – and indeed this comes to the heart of the fallacy.

Jerusalem, the city, has been rebuilt magnificently.  But Har Habayit – the Mount on which the Temple stood, the place that is the holiest on earth because of the Jewish connection there with the Almighty – is not truly ours and cries out for our prayers. 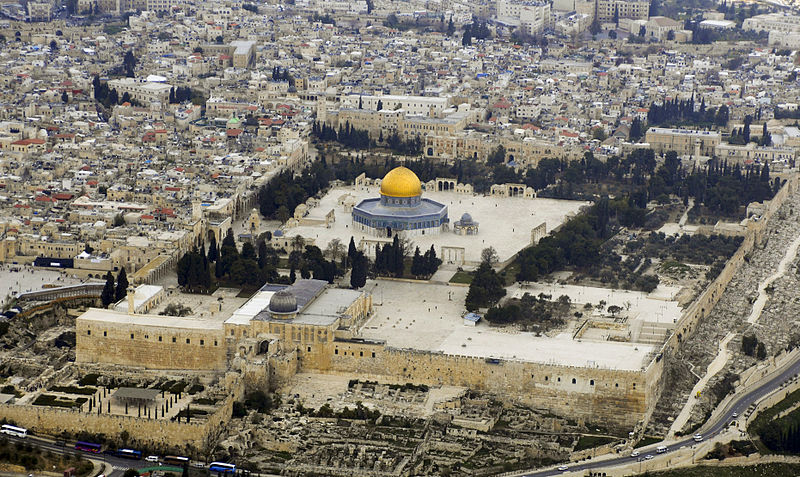 Yes, we have nominal sovereignty over the Mount, and our police can enter there. But the Muslims consider it theirs, and harass Jews who ascend.  (Muslim women, paid by radical Islamists, wait to harass us.)

”Today, on Tisha B’Av, Jews mourn the destruction of the first and second Temples in Jerusalem (586 BCE and 70 CE). However, the Palestinian Authority denies that there ever was a Temple, consistently referring to Solomon’s Temple as ‘the alleged Temple.’ Moreover, the PA also teaches its people that there was never a Jewish history in Jerusalem.”

See documentation of what Palestinian Arab officials are saying, complete with videos, here:

Jews, you must also understand, are not allowed to pray on the Mount.  The Israeli High Court has said they can, but that the police have the discretion to prevent this if there are security issues.  It’s a given that Muslims (who are ever-ready) will riot instantaneously if Jews come to pray… and so the Jews are prohibited from exercising their most essential religious rights in their holiest place, so as to not stir up matters.

I’m not speaking of a third Temple to be built on the Mount (something I believe we do not yet merit, for we have not yet learned to love each other) but essential religious rights.

I went to hear Rabbi Yehuda Glick recently, eager to honor him – for he recovered from the attack of a terrorist that by all logic should have killed him.  He believes that his recovery is a miracle and that his work on behalf of the Mount is not yet done. He warns us not to be satisfied with the Kotel – which is, after all no more than a retaining wall to support the Mount on which the Temple was built. He calls to us to yearn for, to pray for, and to visit Har Habayit.

Rabbi Glick is no radical.  He says we are taught that the Temple should be a House of God for all peoples, and he sees a place there for Muslims too.  He has no desire to banish them – he embraces an enormously idealistic and generous vision.  But he refuses to accept their attempts to banish us.

Today I attended a marvelous shiur (lesson) by Rabbi Ari Kahn.  What he taught is far too complex to repeat here, but his conclusion was enormously powerful.  There are actually two traditions regarding the coming of the Moshiach [Messiah] – Moshiach ben [son of/from the line of] David and Moshiach ben Yosef.  Most of the time, focus is exclusively on Moshiach ben David.  Tracing our history, he finds the spirit of Moshiach ben Yosef – which is focused on physicality – very much with us. This is why the physical city of Jerusalem is built again today  But the spirit of Moshiach ben David – which is focused on spirituality – is not yet with us.

We are lacking, there is reason yet to mourn.  Perhaps we will not achieve Moshiach be David until we love each other.

And so, as this day draws to a close, let us meditate deeply on these lessons, and mourn what we should be mourned, and work to make us – the Jewish people – spiritually whole.

In our spiritual wholeness can we best confront the evils of the world.  Enough to return tomorrow to discussion of those evils, which are ever with us and growing.

“Sinat chinam” is causeless hatred.  “Lashon hara” is gossip, evil talk about others.