Impossible to have predicted that the current world situation would have devolved into something quite as vile as it has.  The more we know about that Iran deal, the greater our understanding of how truly awful it is.

The concessions to Iran have been mind-boggling, but in the end, a demand that the US should have made was not made:

Iran holds four Americans.  Not only did Obama’s negotiating team not tell Iran that there would be no sanctions relief until they were released – Obama has chosen not to speak about them or their plight.  The four are:

Jason Rezaian, a Washington Post correspondent who disappeared a year ago and is accused of “subverting” the Islamic State.

Saeed Abidini, a Christian pastor converted from Islam, he was in Iran to establish an approved orphanage.  Has been held for three years, convicted of being “a threat to Iran’s national security.”  His health has deteriorated.

Amir Heckmati, a former US marine of Iranian heritage, who was in serving as a language and cultural liaison to US military in the Middle East.  He had gone to Iran – for the very first time – to visit family, and was grabbed and ultimately convicted of “treason.”  He has been held for four years.

Robert Levinson, with the FBI for 33 years, and after retirement a private investigator.  Was detained while in Iran eight years ago, charged with being on a CIA mission.  There is some confusion here – as different sources are checked – as to whether this is so, or he was operating as a private investigator when grabbed on Kish Island, an Iranian free-trade zone which is visa-free.

It is no accident that three of the four are Iranian Americans.  The first question to be asked is why every American is not familiar with these names.

When challenged three days ago at a press conference by reporter Major Garrett, as to why the release of the Americans was not demanded by the US, Obama was very coy.  Tying the release of these Americans to the deal would have given the Iranians an advantage, he claimed – they might have demanded even more.

But Obama has it exactly backwards, and the fact that he said what he did is one more indication that the Iranians called the shots in the negotiations.  What if the US had played hardball, and had tied sanctions to the release of the Americans?  Sanctions relief was at the heart of why Iran stayed at the table.

I may have alluded to this before, but I also wanted to mention here the clause in the agreement – in article 10, page 142 – that Western nations signing will offer “cooperation through training and workshops to strengthen Iran’s ability to protect against, and respond to, nuclear security threats, including sabotage, as well as to enable effective and sustainable nuclear security and physical protection systems.”

Israel has relied to some extent on sabotage to slow down Iranian nuclear development.  The US will now be party to making this more difficult.  But what is more, reference to physical protection systems” might mean that a military attack on Iran will now also be more difficult.

“Sources privy to the negotiations said Article 10 did not appear in the interim deal inked between world powers and Iran in April, but was added to the final agreement at the last minute.”

Israeli officials call this “inconceivable.”  In a sane world, indeed.  But that’s not where we are.

The clock is now ticking on the 60 days Congress has to review the terms of the accord with Iran and indicate acceptance or rejection of its terms. This is in accordance with the Iran Nuclear Agreement Review Act of 2015 – frequently referred to as the “Corker Bill,” for Senator Bob Corker (R-TN) Chair of the Senate Foreign Relations Committee, who co-sponsored the bill with Senator Robert Menendez (D-NJ).

This bill provided a major concession to the president – we might say a caving to the president – because of how it is structured.  The Iran deal is not being regarded as a treaty, which would – according to Article II of the US Constitution – require 2/3 of the Senate for approval.  Rather, the White House is treating the accord as matter of “executive prerogative.”

Thus, a simple majority of the Congress can reject the accord, but then a 2/3 vote is required to over-ride that veto.  This is the reversal of what would be the case were the agreement being treated as a treaty.

In an act of blatant disregard for the will of the American people and disrespect for the people’s elected representatives, Obama brought the agreement to the Security Council of the UN, where it passed unanimously.  My information is that the American government proceeded here under pressure from Iran and other nations involved in the negotiations, but it has acted in the face of multiple calls from key members of Congress that he not proceed with this. 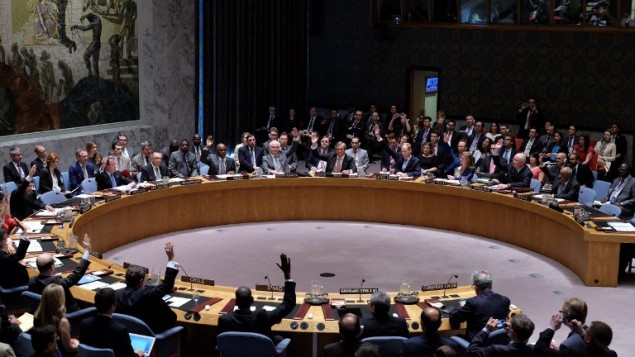 The resolution formally endorses the Iran deal and paves the way for lifting UN (not US) sanctions against Iran.

The big question now is whether this resolution is binding on the Congress in the short term, and whether it will be binding on future US presidents.  This is what Iran claims; Kerry has made similar claims, although this is not the official position of the Obama administration.

The answer is not so simple. One international lawyer with whom I consult calls the situation “complicated,” and right now there is no consensus on this.

I point out here that the UN resolution reads so that the “adoption date” comes 90 days after the Security Council endorsement vote — presumably so that Congress has time to complete its review before the resolution kicks in.

But this fact, offered in multiple articles I’ve now read, does not seem to me to address the core question.  OK, the UN resolution gives Congress time to review the agreement.  But if Congress rejects it, and the resolution kicks in, then what?

“Some international legal experts say that…the UN resolution doesn’t make adhering to the entire nuclear pact obligatory for all parties.  [That is, the US could sustain its sanctions on Iran if Congress so decides.] At the same time, they said the resolution would require all signatories to the deal — including United States and Iran — to comply with key provisions like the lifting of the UN arms embargo and ballistic missile ban in five and eight years, respectively.”

Consider this:  The deal with Iran was supposed to be unanimous – that is, it was not supposed to kick in unless all parties (P5 + 1) agreed.  The US agreement at this point, however, is only tentative, because the administration has signed off on a Congressional review of the deal.  In theory, if Congress rejected the accord – and was able to override a veto by Obama – then the deal should have been considered failed, because then the US would then not be on board.

But Obama – who was not about to sit still for this possibility – has done an end-run around it.  Now that the deal has been endorsed by the Security Council, it exists in international law.  It may well be that Congress will still have options regarding whether to lift US sanctions on Iran, but its clout has now been considerably reduced.

What I know with certainty is that many members of Congress are infuriated, enraged, by what is going on.  From a key Senatorial aide, with whom I remain in touch, I received this today: “We are brainstorming right now as to what creative things we can do. We are NOT just rolling over and giving up. We will fight!”

Walter Russell Mead, writing before the Security Council vote, had this to say (emphasis added):

“…Dissing Congress is a risky move for American presidents. There have been widespread reports that many Democrats on Capitol Hill would like to support the President’s Iran policy, but are worried about the political fallout among voters back home. In the end, many of these waverers would probably support the President on the Iran deal in a straight up Congressional vote, but if the President does an end run to the Security Council, the waverers could—and many will—oppose him on procedural grounds. Both the Senate and the House are jealous of their Constitutional prerogatives, and voting to uphold the powers of Congress is a much easier vote for Democrats than voting against the President on an important foreign policy issue…

“This is not likely to end well. President Obama was stretching both his Constitutional powers and his political mandate when he decided to short circuit the treaty process for one of the most important decisions that American foreign policy has taken in many years. There is precious little doubt that the Founders would have considered this a threat to the system of checks and balances they wrote into the Constitution…”

Andrew McCarthy, in a speech reproduced by Frontpage Magazine, says:

“So the two checks that the Framers essentially gave to Congress to reign the president in were the power of the purse [blocking funding] and impeachment.”

Is Congress sufficiently furious, at long last, to consider impeachment?

The US Secretary of Defense is in Israel now, but I will close here and write about this next time.