On Thursday, I attended the Second Annual Conference on the Application of Israeli Sovereignty over Judea and Samaria, held in Hevron, at the visitors’ center near the Machpela and sponsored by the Women in Green (with organization done by Yehudit Katsover and Nadia Matar).  Several hundred people were in attendance; with perhaps miniscule exceptions of which I was unaware, they were all firm believers in the need for, and the rightness of, that sovereignty from the river the sea.

What seems to me the single most important impact of a conference such as this one is that it brings together those who passionately care about this issue, providing not only information, but a huge morale boost and an opportunity to network.  It’s really great to be at a conference at which no one says, “Wait, what about the Palestinians’ right to their state?”  Because everyone gets it.

Rather than go speaker by speaker (there were many speakers), I would like to summarize the main thrust of the speakers and touch briefly upon some points made.

Rabbi Professor Daniel Hershkowitz, who heads the HaBayit Hayehudi party, and is Minister of Science and Technology, was the keynote speaker. 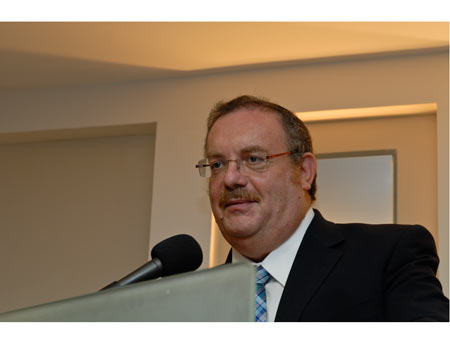 First, he said, we have to believe.  And with this he delivered a message that was heard again and again.  The beginning is with us, the Jews of Israel.  We cannot claim to the world our right to the land — although indeed we must do this! — until we believe in that right.

Rabbi Hershkowitz called upon the prime minister to adopt the Levy Report as binding, for it puts in legal terms what is written in our texts.  The Jewish People connects to the Divine Presence in the Land. And what we need now is action, not words.  We must live in every part of Eretz Yisrael (the Land of Israel).

His call for action was most important. Because it struck me during the conference that as uplifting and important as the statements about our land are, what is needed are plans of actions and guidelines for moving forward to make it all happen.

Attorney Gershon Mesika, the head of the Shomron (Samaria) Regional Council, echoed Rabbi Hershkowitz’s theme: Sovereignty, he said, must first be in our heads.  Do we see ourselves as grasshoppers, as the Jewish spies going into the land of Canaan did? 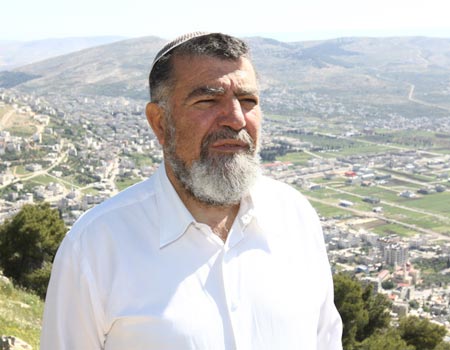 In the Bible we have a deed to the land of a sort that no one else has.  It spells out our rights and yet we are always apologizing. We need to be on the offensive on all fronts and come out against Oslo.

Mesika told the story of having gone to Brussels in May to speak to the EU parliament.  He related that to his surprise, some applauded him when he was done.  Never before, he was told, had an Israeli come to address the parliament in such clear terms.  The Palestinians always come to say what they demand, but the Israelis speak in terms of deals and give and take.

“…this area [Samaria], which for many in the world is nothing but ‘disputed land,’ is a homeland for us, the place that characterizes and determines our national and religious identity, the scene of the great events described in the Book of Books, the Bible.”

On a more pragmatic level, Mesika pointed out that 90% of Arabs would prefer Israeli sovereignty, as their lives would be better, but are too afraid of the PA to take this position.  In this regard, he cited Sheikh Mohammad Jabril, who said that any Arab who signs a peace treaty with Israel [between the Palestinian Arabs and Israel] will not live to see another day, because he will have ceded land that belongs to the Arabs.

Attorney Daphne Netanyahu, editor of the Hebrew “Maraah” [mirror] Internet magazine, expanded upon one of the major themes of the conference:  There is an absence of willingness to accept sovereignty, she told us.  It is not enough for others to give us our rights, we have to be prepared to accept them.

We need the national courage to apply sovereignty of the land, and the leaders are the obstacle. 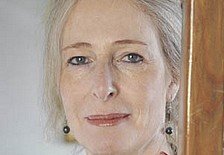 A running difference of opinion among speakers at the conference had to do with whether it’s better to wait until all of Judea and Samaria can placed under Israeli sovereignty or to begin with Area C (as defined by Oslo) and follow with the rest later.

Rabbi Hershkowitz is adamant about the need to annex everything at once, even if it means waiting until the time is right.  Otherwise, he said, we would be de facto relinquishing the right to the areas we didn’t annex — we’d be making a distinction between one part of our claim and another.

MK Uri Ariel (National Union) spoke about a political program for achieving full sovereignty, from the river to the sea, one step at a time.

First, via the mind, with acceptance of the Levy Report and an understanding of the situation that is absorbed by the populace.

Then, facts on the ground, with the goal of 500,000 Jews living in Judea and Samaria — a goal we are approaching.

After this, establishment of sovereignty one step at time, beginning with Area C.  This should be done as soon as possible.  If it were done today, there would be roughly 379,000 Jews in this Area, and some 60,000 Arabs, all of whom should be accorded full civil rights.  He spoke about what would be necessary as this unfolded, with half the Knesset elected by regions.  He pointed out in passing that Arabs in Jerusalem, who have the right to secure citizenship, behave as residents — with only 10% voting in municipal elections; he anticipates that this might be the pattern in Judea and Samaria.

Emanuel Shilo, editor of Be’Sheva, had yet another approach:  Start with annexation of the Jordan Valley.  This signal Israel’s intent in terms of how far sovereignty will ultimately extend, and the case can be made on a security basis.  Then follow with Area C.

While Carolyn Glick, columnist and JPost senior editor, who addressed the gathering by video, observed that we’re likely to take the same heat whether we annex just Area C or all of Judea and Samaria.  She anticipates that the worst reaction will come from the Europeans and not the Arabs; in the PA itself, she sees the “Security Forces,” armed and trained by the US, as presenting the worst problem.

Attorney Itzik Bam of the Legal Forum for the Land of Israel gave a fact-filled and enlightening presentation about the current legal situation in Judea and Samaria.

Very briefly:  In 1948, when the Arab League attacked Israel and the Jewish state acquired territory beyond what had been defined by the partition plan, the Ministry of Defense took over temporarily and then it was decided that sovereignty would be applied to whatever land Israel acquired.

But today there is a reluctance to apply these principles to Judea and Samaria.  The stumbling block is essentially political, not legal.

In 1956, Israel took the Sinai.  It was understood that this would be a temporary situation and so a military structure was put in place and it was considered a belligerent occupation before Israeli withdrawal.

Before the Six Day War in 1967, the Military Advocate General anticipated that a war was coming and so he laid out a military plan, using the Sinai situation as his model.  It was the only plan that was prepared when we acquired Judea and Samaria, and so the area was treated as an occupation with military rule — even though the example of the Sinai was not applicable.  It was determined that Jordanian law would continue to apply except as the Israeli Military changed it.

This, then is how we got into the fix we are currently in.

Until there is negotiation, as called for under Oslo, military law continues to apply.  But Judea and Samaria are not occupied territory according to international law.  It is undetermined in its status — a unique situation, as there is no sovereignty to which the land might be returned.  Israeli sovereignty can be introduced, just as we applied Israeli law to eastern Jerusalem.

Howard Grief, attorney and author of the book, The Legal Foundation and Borders of Israel Under International Law, offered a strong presentation based on his exceedingly extensive research of 25 years duration, into the legal rights of the Jewish state.  He addresses the historical situation going back almost 100 years in terms of allocation of the Ottoman Empire, San Remo Conference and a great deal more.

He concurred with Bam that the Military Advocate General was responsible for an exceedingly bad decision in 1967, but he disagrees with regard to the notion that Judea and Samaria currently have questionable or undetermined status.  Absolutely and unequivocally, he says, the land is ours.

You can see a two-part interview by Grief that outlines his position, here:

Lastly, here, I will mention MK Tzipi Hotovely (Likud), who announced her intention to introduce the Levy Committee findings into the record as law.  If it doesn’t pass, she says, she will continue to do so as often as the law permits, until it does pass.

I am greatly encouraged by this. Tzipi who is a lawyer, is as sweet as she looks, when you meet her. But she’s tough and very determined.  For me, this represents the hope for Israel’s future.  We’re going in the right direction, at long last, and slowly we will get where we need to go.

It is hoped that in not many years the right wing nationalists will represent the majority opinion of Israel.

In my last posting I alluded to an article written by Tzipi Hotovely, “Time to apply Israeli law over Judea and Samaria,” but apparently got the URL wrong,  (With thanks to Bennett) here it, correct:

In this piece she calls for a land registry. And she speaks of a long term process that will lead to full sovereignty over Judea and Samaria.

“For those that value international opinion, we would remind them that not a single embassy graces Jerusalem. Yes, not even the western part of the city. Does this mean we should be prepared to relinquish sovereignty over our capital city? David Ben-Gurion already decided this matter in 1949 when he chose to move the Knesset to Jerusalem. Begin decided when he passed the law annexing the Golan Heights.

“Now it is our turn to decide.”

For the record, the persons I alluded to above do not constitute the full list of those who presented at the Conference.

And before closing, a couple of corrections from my last posting:

The Philadelphi Corridor.  I know that this is what it is. But my fingers keep working on their own, so that sometimes I inadvertently write, “Philadelphia.”  Ignore this, please.  (Thanks to those who caught this.)

And when I spoke about Plesner’s reference to draft evaders, I inadvertently called them “invaders.”  Oops.  (And thanks to an eagle-eyed Robert.)