I begin by returning to the issue of Jewish/Israeli rights on the Temple Mount, which I wrote about extensively in my July 9 posting:
http://arlenefromisrael.squarespace.com/current-postings/2012/7/9/july-9-2012-a-matter-of-great-import.html

In my effort to better understand the situation, I had a conversation with MK Arieh Eldad (National Union), who co-chairs the Knesset Lobby for Judea, Samaria, and Gaza.

He told me, first, that there is no simple way to secure lifting of the gag order (for “security reasons”) that had been placed by the Knesset State Control Committee on a Temple Mount report done by the Comptroller’s office in 2008.  There would need to be, he speculated, a court ruling or a complete change in circumstances.

The reason for the gag order, I have been advised, involves understandings between Jordan, which controls the Wakf (Islamic Trust, which administers the holy sites on the Mount), and Israel.  Those understandings pertain at least in part to hours during which the Mount will be open to Jews.

I had alluded in my June 9th posting to the words of Moshe Dayan, who had made arrangements with the Wakf regarding freedom of Jewish access to the compound without limitation: “it would be inconceivable for Jews not to be able freely to visit this holy place now that Jerusalem was under our rule.”

I indicated in that post that Jews do not have free access to the Mount, and here it is, a forged agreement: So many hours this day, some hours on that day.

Then, I asked MK Eldad, this was kept secret so as to not embarrass our government for forging an agreement that restricts Jewish access to the Mount?

Not at all, replied MK Eldad, “this government is beyond embarrassment.”  Netanyahu, he said, is proud of maintaining a good relationship with Jordan: It was kept secret so as to not embarrass the king of Jordan, who had agreed to permit Jews on the Mount when many Arabs would prefer that no Jews go there at all.

The specifics and the details of that agreement are hidden from us.

I alluded then to the difficult time Jordan gave us with regard to the Mughrabi Gate, withdrawing cooperation after Netanyahu had attempted to involve the Jordanians at every level.  “The Jordanians have not been cooperative for ten years,” replied MK Eldad.

He told me that he registered a complaint about the work being done in the Dome of the Rock, and was advised that the Arabs were doing it “with permission and supervision.”  “Much worse,” he observed, “than if they were doing it behind our backs.”

There you have it, my friends. This must not be the end of the story.

Several additional points, for the record.  After the Oslo Accords of 1993, a struggle ensued between Jordan and the PA regarding the Wakf and control of Mount holy sites.  My sense of it is that there was a period when there were actually two Wakfs, with Arafat seeking rather successfully to dominate the situation with “his” mufti (Islamic legal authority).

But the Jordanian-Israeli peace treaty of 1994 included a clause, insisted upon by Jordan, that Amman would be accorded a preferred status in future Israeli-Arab talks about the Temple Mount.  This raised the hackles of those who felt that Israel had sovereignty over the Mount.

Then, in 2008, according to a report by the Jerusalem Center for Public Affairs, the Jordanian-controlled Wakf took over administration of the Mount and the PLO was pushed back.

The date 2008 dovetails with the time of the Comptroller’s Report — alluded to above — that was declared to contain “security” issues that prevented it from being made public.

So there was a new mufti that Israel was working with, and who knows what else it contains beside the allocation of hours for Jews to go up on the Mount?

Who knows what matters were addressed that might be an embarrassment to the Israeli government with regard to relinquishing of control of the Mount?

Might it even be that Netanyahu acceded to Jordan on issues of the Mughrabi bridge (ultimately not replacing it) because of some formal agreement in terms of authority and not just out of a desire to give Jordan a role informally to keep matters smooth?

How much, precisely, don’t we know?

I can only ask the questions.

One other point:  I am very much in favor of Jews going up on the Mount to demonstrate concern and interest — I encourage this.  However, the Mount is holy ground and Jews should not walk on the area where the Temple had been located.  It is important to go with a guide who understands these matters, and, if in doubt, to consult your rabbi.

It is insufficient to describe what is going on in the world as “crazy.”  Consider:

The United Nations Conference on the Arms Trade Treaty convened a meeting in New York last week and which will continue until June 27.  It is supposed to deliver a new agreement to regulate the trade of arms.

One of those elected was Iran.  That’s the same Iran that was recently charged by the Security Council with illegally transferring arms to Syria.

And speaking of Syria:  This country is now slated to win a seat on the 47-nation UN Human Rights Council.

The election is to be held next year for a term that begins in 2014.  And unless there is intervention in the system, Syria will be in.  As Hillel Neuer, executive director of UN Watch explains, this is because of the “prevalent system of fixed slates, whereby regional groups orchestrate uncontested elections, naming only as many candidates as allotted seats. That’s how non-democracies like China, Cuba, Russia and Saudi Arabia won their current seats, and how Pakistan and Venezuela are about to do the same.”

This means, of course, that it’s not just a matter of Syria vying unilaterally for a seat — rather, a group of nations (the 53 members of the Asian group) has determined it’s fine and dandy to include Syria on its slate.

Alarmed by this, the EU and the US are advancing a resolution that states, Syria “fails to meet the standards” for Human Rights Council membership.  But if this comes before the membership of the Council for a vote??

He hopes for a democratic Palestinian state next to Israel.  Democratic.  Does he believe this stuff?

Catherine Ashton, EU foreign policy chief, of course agrees with Barroso.  In Strasbourg yesterday, she
said that, “Ending the conflict remains a top priority.”  Helpfully, she pointed out that the settlements are a “key and most serious concern” with regard to a peace settlement. In fact, the settlements “put current peace efforts at risk.”

I suspect her mind is made up. There’s little point in telling her about PA incitement and school maps that don’t include Israel and a PLO covenant that calls for Israel’s destruction even today, and Abbas’s insistence on “right of return.”

So how can I describe all of this? Crazy, yes. But perverted, hallucinatory, maliced, and obscene are a few of the other words that come readily to mind.

Such is the world we live in.

The point I would make here — and will continue to make — is that we, as Jews and as Israelis, will also be crazy if we seek to accommodate this world.  We must march to our own drummer, firm in the knowledge of our rights.

Of course, if we also factor in news about Iran, then we would have to additionally say the world is suicidal.

Portions of a Pentagon report that were declassified today say that:

Iran’s military has “boosted the lethality and effectiveness of existing” ballistic missile systems with “accuracy improvements and new sub-munition payloads,”  The Iranians are also acquiring “new ships and submarines.”

All this while Iran continues to develop its nuclear capacity, undeterred by economic sanctions:

“A position paper obtained by The Times of Israel, understood to have been used by Iran’s negotiators at last week’s technical-level talks with the P5+1 powers in Istanbul, makes plain the Tehran regime’s unyielding rejection of international efforts to negotiate safeguards and restrictions that would prevent Iran attaining a nuclear weapons capability.
“Far from indicating Iranian readiness for a suspension or scaling back of its nuclear program, indeed, the document, made available by an informed source on condition of anonymity, includes references to Iran’s expansion plans.”

I can say with a reasonable degree of confidence that here, at least, Israel will march to her own drummer:  We do not intend to adopt a suicidal policy vis-a-vis Iran.

With all of this, I will end on an upbeat note:

Yesterday I attended a press conference for bloggers hosted by iVoteIsrael, and done under the auspices of the Republican Jewish Coalition.

iVoteIsrael is a fine organization — non-profit, non-partisan — that is promoting the registration of Israelis who are American citizens, so that they can vote in the upcoming presidential election.  This is  particularly important this time around because that election is so critical.  Evidence is that American Israeli votes that are cast — and all absentee ballots ARE counted — can make a difference.

If you are an American in Israel and have not registered, or have a relative who is an American Israeli, see http://www.ivoteisrael.com/ for additional information and a simple registration process.

Note: even if you are a registered voter, the new rules require that you register each time for an absentee ballot.

The program yesterday featured Matt Brooks — the Executive Director of the Republican Jewish Coalition and the Jewish Policy Center, a think-tank, and Ari Fleisher — White House press secretary for George Bush from 2001 – 2003, consultant on press communication, and author of a best selling book, Taking Heat.   Brooks is on the left, below. 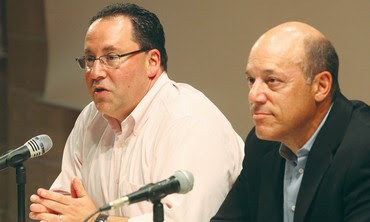 These gentlemen had just flown in from the States and will be here in Israel for some days promoting voter registration.

Most American Jews are not going to vote Republican. This is acknowledged as fact: Jews historically are Democrats.

Matt, for his part, indicated he’s encountering a good deal of “buyer’s remorse”: Jews who voted Obama last time and now regret it.

With Romney, he said, we will get a president who is pro-Israel all of the time, from the heart.  It is when Israel’s enemies see light between Israel and the US that Israel is most at risk. This should never be.

There are 163,395 eligible US voters in Israel.  Their voting pattern is different from that of Jews in the US. They — we! — vote two to one Republican, according to a poll commissioned by iVoteIsrael. And of those who did vote for Obama last time, 37% do not intend to do so this time.