I have made no secret of it: the current election campaign has not exactly been an enlightening period for Israel.  For many of us, this has been a source of great sadness.  Our nation is capable of better – of a more elevated campaign.  There has been too much back-biting, too much in the way of personal attacks, and too little serious contemplation of the major issues.

But I did promise that I would address the political situation prior to elections, which take place next Tuesday, September 17.  The bottom line is that the resolution of this campaign will have a tremendous impact on our nation because we are living through such tough times. 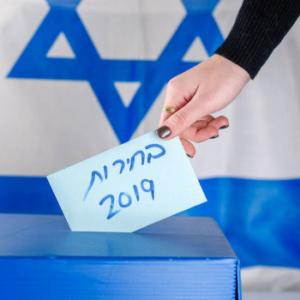 But, while we are just days away from the election, there is no clear winner indicated in the polls.  That feels scary, even though polls are notoriously inaccurate.

What is more, certain pertinent international situations are shifting in a troubling way.  We’ll get to all of this.

Our nation urgently needs a right-wing government that will vigorously advance a vision of a strong Israel.

Obviously, the center-left Blue and White does not fit the bill. What is more, this merged faction – consisting of Benny Gantz’s Israel Resilience Party, Yair Lapid’s Yesh Atid, and Moshe Ya’alon’s Telem – lacks the combined expertise that would equip it to lead the country.  We are looking at two generals and a journalist. While Gantz has failed to demonstrate solid leadership capacity, Lapid is eminently unqualified; his anti-haredi jibes have been disgusting.

But it is not simply a question of acquiescing to his leadership by default. Whatever his failings, there is no one in the running who offers the expertise and qualifications of Binyamin Netanyahu. A good part of the nation (some 40%) agrees with this assessment: they express a conviction that we must have Bibi at the helm. 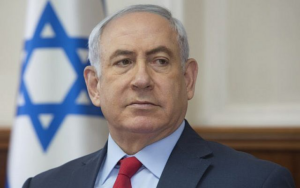 Tough and politically savvy, he has been in his office longer than any other prime minister (which some say is sufficient reason for him to bow out) and demonstrates some notable strengths.

His readiness to stand up to Iran, and actively call it out in the international community is laudable. The world – whether it acknowledges this or not – owes him a great deal because of his persistence in exposing the dangers of Iran.

On Monday, he made a two-pronged announcement with regard to Iran’s nuclear development:

First, he spoke about Israel’s exposure last year of Iran’s secret nuclear warehouse in Turquzabad, used for storing materials and equipment for its secret nuclear program.  The Iranians tried to hide the site once it was exposed, but “the IAEA found traces of uranium that Iran hid in these sites.”

And then he announced that another secret nuclear site near the city of Abadeh had been exposed in the archives that Israel brought from Tehran. In this site, Iran conducted experiments to develop nuclear weapons. When Iran realized this site had also been uncovered, they wiped it out.

There were those who charged that the timing of this was purely political, and the announcement over-dramatized for campaign purposes.  But I was willing to cut the prime minister some slack, because his positions vis-à-vis Iran are solid and important.

I was very pleased, as well, with the news that “unidentified planes” struck targets in eastern Syria belonging to pro-Iranian militias. This was in the area where Iran is building its biggest military base in the country to date.

Subsequently, the IDF spokesperson for Arabic warned that Syrian President Bashar al-Assad will “pay a heavy price” for his continued assistance to Iran on his country’s soil: “This thing is not hidden from us. You have been warned.”

So we are conducting ourselves resolutely, as we must.  In this regard Netanyahu does very well.

Then, too, there is the prime minister’s special strength within the international community.  Abroad, he has cultivated some extraordinary relationships: with Trump, Putin, Modi of India, and others.  These connections serve Israel well – although the relationship with Trump may no longer be as tight as it had been – and a globe-trotting Netanyahu makes the most of them. He just came back from the UK and a meeting with Prime Minister Johnson, although that yielded little.

On Thursday he is scheduled to go to Russia.  His relationship with Putin has been critical, as we attack Iranian installations in Syria, where Russia has a presence.  This visit will also have a strong political dimension because of Likud attempts to draw Russian-Israeli voters. 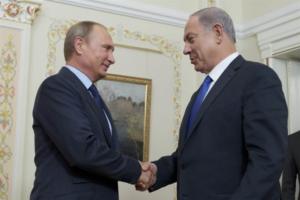 Those who have an inherent mistrust of Netanyahu tend to see him as unidimensional: acting only in his own political self-interest.  My perception is that he is a complex man, who deeply cares about our nation and is capable of acting on her behalf, but is prepared to pull out the stops in order to achieve electoral victory.

On Tuesday evening, Netanyahu delivered a strongly hyped message to the nation.  It is my opinion that this was a questionable move in several regards. He began by declaring (emphasis added):

“We are on the eve of the elections. President Trump said he will present his Deal of the Century few days after the election and it is just around the corner. This presents us with a great challenge and a great opportunity to apply Israeli sovereignty to Judea and Samaria and other areas.

“This will be our defensive belt to the east. It ensures that we will never be a country a few miles wide.”

He would do this, however, only if he was re-elected: “This is a democracy. I won’t do anything without a clear mandate. So I’m asking for a mandate…”

For the record: The Jordan Valley is part of the Great Rift that extends from Syria to the Red Sea; the valley runs along both sides of the Jordan River and the prime minister was speaking of the area to the west of the river, between the Kinneret and the Dead Sea (he excluded Jericho, which is controlled by the PA). The Jordan Valley is the only truly defensible eastern border for Israel. 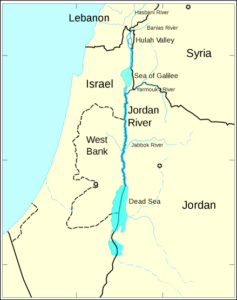 Now this is not a bad move – it is an extremely good move.  The problem was with the timing. Netanyahu might have taken this action at any time but waited until a week before the election to make the announcement, and then he predicated it on his re-election. His political motivation seemed transparent.  Opponents were referring to it as no more than “spin” with no guarantee that he would follow through.

Today, Wednesday, Netanyahu advanced a position that might help redeem him with regard to charges that his pledge was only “spin.”  He said that on Sunday, when the Cabinet is in session, he would move to “normalize” the status of the Israeli-controlled town of Mevo’ot Yericho, near Jericho.

Keep reading below for more that vindicates Netanyahu’s promise regarding the Jordan Valley.

But Netanyahu committed to more than sovereignty in the Jordan Valley on Tuesday night: He said that sometime after the election, if he had received the mandate of the people, he would apply sovereignty to all of the Jewish communities (aka “settlements”) in Judea and Samaria.

This is very definitely NOT a good move:

These communities, all located in Area C, constitute about 5% of Judea and Samaria.  We have been seeing a very disconcerting move by the PA, backed by the EU, to put up large numbers of illegal buildings in Area C, which is nominally under full Israeli control.  In addition, the PA has been illegally seizing tens of thousands of dunams of agricultural land in Area C.  Regavim has reported extensively on this:

Were Netanyahu to proceed with his plan, Jewish communities in Judea and Samaria, recognized as fully part of Israel, would find themselves surrounded by hostile Arabs.  This is not a tenable situation.

At a minimum, sovereignty must be applied to all of Area C, and soon.

And there is still more:  Netanyahu indicated, or implied, that his moves would be taken in coordination with President Trump – with regard to the soon-to-be-unveiled “peace plan.”  The prime minister said this was a “unique and once-in-a-lifetime opportunity to do something with broad consensus.”

In point of fact, we don’t need Trump’s permission or that of anyone else to act on our own behalf.  But even if Trump did sign on to this, it would not constitute a “broad consensus.”  The EU – whose position is worthless – has already objected, and others will as well.

What Netanyahu was doing was emphasizing his unique and close relationship with the American president, which presumably engendered this support.

A campaign billboard in Tel Aviv 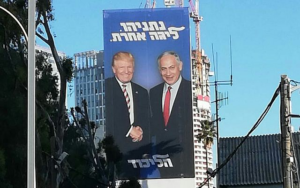 But was Trump truly on board with what Netanyahu had proposed?

This is the question Times of Israel Editor David Horovitz posed very quickly after the prime minister spoke:

“So now we wait to see whether Netanyahu’s appearance on Tuesday was a genuine harbinger of genuine US-backed diplomatic drama to come. Or whether the prime minister was putting the best face on a failure to extract a specific US commitment to back his move now.”

We did not have to wait long for an answer: The US promptly put out a statement indicating that there had been no change in their policy.

According to Globes, Netanyahu – who had shared his intentions with Trump officials on Tuesday afternoon – had planned to announce application of sovereignty to the Jordan Valley on Tuesday night, but the White House strongly objected to this prior to release of the “Deal of the Century.” Netanyahu finally relented and agreed to a much weaker announcement.

This put him in a difficult spot, as he had declared that a truly dramatic event was going to be announced, and made it appear that he was simply doing “spin.”

I doubt that there is a single commentator who has failed to observe that Trump’s reluctance to endorse Netanyahu’s plans coincided with Trump’s firing of National Security Advisor John Bolton. News of the firing came as a shock, and was greatly unsettling. 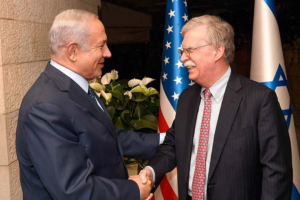 I respect Bolton enormously and have felt confident knowing he was advising the president.  Whatever else is involved in this parting of the ways, it certainly seems that the issue of Iran is at its core.  Bolton is a hawk, committed to a tough stance on Iran.  But suddenly Trump has some half-baked notion of doing dialogue with the Iranians.  Maybe they can share tea and cookies. (The Iranians expressed delight with Bolton being fired, which tells us all we need to know.)

Binyamin Netanyahu is the very prototype of Iran hawk.  We can see a cooling of the Netanyahu-Trump relationship as the president shifts his perspective. All of this is exceedingly disturbing.

As to Netanyahu’s commitment to applying sovereignty to the Jordan Valley right after elections, we will wait to see how quickly he fulfills this, in light of the fact that this could not be used to bolster his right wing support prior to the elections.

I hope to do one more posting before election day, and would like to consider some serious issues with regard to how Netanyahu relates to other factions on the right. This is something that merits serious attention; the question now is how to best promote right-wing support.

Several rockets were launched from Gaza Tuesday night, and Israel retaliated.  I might also want to take a closer look at this situation.