From Israel: WOW and WOW AGAIN!

The head spins: things are happening so quickly.  But it’s a good spin. A great spin. 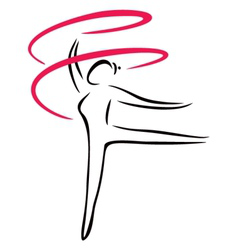 Let me back-track just a bit.

Two days ago, when last I wrote, intelligence indicated the likelihood that there would soon be an attack by Iran launched from Syria; it was expected that local militia and associated Shiite groups would be utilized to give Iran deniability.

No sooner had I hit the “send” button, then there was word of unusual activity spotted in Syria; orders went out for the air raid shelters on the Golan Heights to be opened.

The very next report, very shortly thereafter, was of an explosion in Syria, in the Al-Kiswah region south of Damascus, where there was a base that housed Iranian forces; missile silos and rocket launchers were hit and some eight Iranians were killed.

Here we have a picture of the fire outside Damascus as a result of that hit:

~~~~~~~~~~
Until now, it has not been Israeli practice to acknowledge these hits directly, but the game has changed.

That was pretty neat.  This preemptive strike once again sent a message to the Iranians that we’re watching every step.

In connection with this, various individuals cited the Talmudic dictum regarding self-defense: “If someone comes to kill you, rise up early in the morning and kill him first.”
~~~~~~~~~~
That was Tuesday night, and on Wednesday morning, Intelligence Minister Yisrael Katz (Likud) made a statement (emphasis added):

Iran, he explained, “threatened—both in public and through messengers—to hurt Israel…We both defend soldiers and civilians and act through intelligence and all of our capabilities to locate and prevent (attacks) in advance…

“…”only strikes now, today, could prevent violence and wars tomorrow. The Iranians don’t understand any other language.” 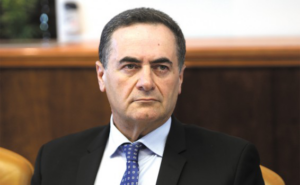 ~~~~~~~~~~
What also happened yesterday is that Prime Minister Netanyahu made one of his not infrequent trips to Russia to consult with President Putin. Before going, Netanyahu had indicated that all of these visits were important, but this was especially the case this time.

Yesterday was Victory Day in Russia, celebrating the Russian military victory over the Nazis, and Netanyahu participated in the Victory Parade.  It was a bit strange to see this in video casts, especially as the parade showcased the military equipment used to protect Syrian President Assad. But Hatikvah was one of the anthems played at the event and Netanyahu was treated with full respect.

Here you see Netanyahu with Putin to his left.  To his right is Ze’ev Elkin, Minister of Jerusalem Affairs; Russian-speaking because he was born in the Ukraine, he travels with the prime minister to Russia.  To Netanyahu’s his far right is Serbian President Aleksandar Vucic, the other head of state who was present at the celebrations. 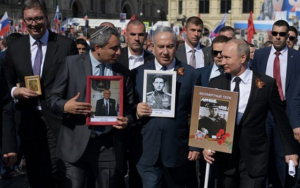 Netanyahu did have time alone with Putin in the Kremlin after this event, and I think the look on his face here tells it all. 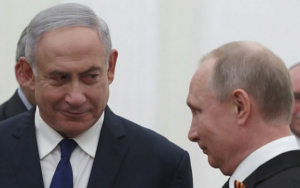 Drawing on the theme of Russian victory over the Nazis, our prime minister told Putin that: “It is hard to believe, but 73 years after the Holocaust there is a country in the Middle East, Iran, which is calling for the destruction of six million Jews.”

In a press briefing after the meeting, he said, “I wanted to clarify to the Russians what our considerations were in the various operations in Syria.”

He indicated that there was no reason to believe that Moscow would limit Israel’s freedom of action in Syria.
~~~~~~~~~~
By last night, the situation had escalated in our north.  Once again warnings were directed to the Golan. As an alarm went off in the region, there were admonitions to use the bomb shelters.

This time, as 30 Iranian rockets were launched towards Israel we did not have a chance to do a pre-emptive action.  All prior expectations aside, the launching was by Iranian Al-Quds forces and not by proxies.

However, not a single one of those rockets hit in Israel:  Four were headed towards the Golan and were repelled by Iron Dome.  The rest fell short and landed in Syria.

There were no casualties on Israel’s side; no damage was caused; and no hits were identified in Israeli territory.

In one of its biggest operations in decades, the IDF launched a four-hour attack on dozens of Iranian and Al-Quds Force military targets in Syria.

All Israeli planes returned safely to base.

“We have hit almost all the Iranian infrastructure in Syria.”

How’s that for a WOW? 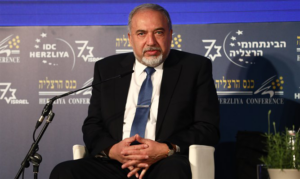 “We will not allow Iran to turn Syria into a frontline base for activity against Israel. This is our clear policy, and we follow it.”

“If we have [missiles] rain[ing], they will have a flood…

“First of all, it needs to be clear: Unlike the Iranians, we aren’t attempting to expand, and we’re not trying to create a new border. The one who is constantly trying to expand and create new conditions for itself is Iran. And not just when it comes to Israel – we see them working in Yemen, in Lebanon, and in Africa.

“We are now facing a new reality, one in which Iran, as Iran, is trying to attack Israel, to harm our territory. And it won’t happen.”

The last statement above is of considerable significance.  We have reached a new stage in Israel’s interaction with Iran.

I will note here that Russia, which had been informed prior to this military action, did not interfere.  The timing of the events described immediately above is obviously not a coincidence.
~~~~~~~~~~
In addition to WOW, I believe it’s important to say BARUCH HASHEM: THANK GOD. The Almighty is with us.

We have some tough days ahead, but we are going to be OK.  ~~~~~~~~~~~
I had hoped to discuss Trump’s actions regarding the Iran deal in this post. There was, in any event, much yet to say. And even more so is this the case now, with regard to our military confrontation with Iran.  We’ll get to it.

Trump’s intention is to fatally weaken the malevolent Iranian regime via very stringent economic sanctions.   This, obviously, will be a factor in what we have to deal with here.

See this piece in the NYPost:

“By withdrawing from the agreement, Trump unshackled America’s most powerful economic weapons and restored US leverage to push back on the entire range of Iran’s malign activities.”

https://nypost.com/2018/05/08/trump-now-needs-to-bring-irans-economy-to-its-knees/
~~~~~~~~~~
Tomorrow is Friday, which means it is “Gaza fence day.” There is a shift now in the manner in which the IDF will handle the “protestors” who send kites with incendiary devices into Israel, with intention of starting fires.

On Wednesday, Public Security Minister Gilad Erdan (Likud) said the army now has orders to treat them as terrorists.

Sunday is Jerusalem Day.  A day later the US Embassy will be officially opened in Jerusalem.  These are reasons for great  joy and thanksgiving.

At the same time, it is “Nakba Day” – which the Palestinian Arabs treat as a time of tragedy because of the founding of the Jewish state.  They are planning on making the maximum furor possible.

I will do my best in reporting on all counts.
~~~~~~~~~~
Once again I feel moved to end with a song. This is Tov Lehodot LaShem.  It is good to give thanks to the Almighty, from Psalm 92.

Here a spirited version with Rabbi Lazer Brody (on the left) and Shlomo Katz.