From Israel: Who We Are

With everything that has been going on, I thought it important today to begin by highlighting a couple of the things happening here that shine a very positive light on who we are.

Time and again I have observed the remarkable attitude displayed by survivors of terror attacks.  An attitude that is both devoid of hatred, and breathtakingly strong.  I begin with one more incredible instance of this resilience:

A week ago Friday night, a terrorist massacred three members of the Salomon family, Yosef, the father, and Elad and Haya, two of his children.  The family was gathered for a Shalom Zachar, a Shabbat celebration for the birth of a baby boy.  The baby was the first child of Shmuel and Chen Salomon.

This past Friday, eight days after his birth, was the child’s Brit Milah (ritual circumcision).  Shmuel and Chen invited all of Israel to participate in their joy, “so that the Salomon family will be remembered as happy and joyous and not sad and hurt.”

Shmuel had not yet completed the first week of mourning (shiva) for his father and two siblings, which began with the burials. A tallit covered the clothes he wore in mourning.

This is who we are: We choose life. 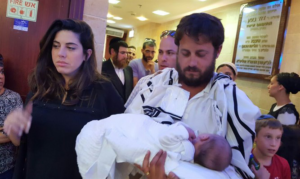 May little Ari Yosef bring much joy to his family, and may they know no more sorrow.

And then, an example of on-going chesed – lovingkindness – exhibited by Israel: medical aid provided by the IDF to wounded Syrian children. In this broader sense, as well, and in the midst of breathtaking inhumanity to our north, do we choose life.

I am very proud that we do this. Please, see the video: 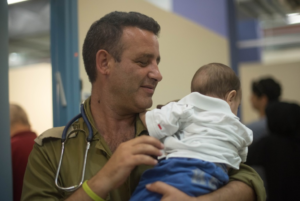 I want to circle back and examine some of the issues regarding the Temple Mount – likely not for the last time.  Here I simply hope to provide a bit of clarification.  The issues are exceedingly complex.

As to that “status quo”:  it is an informal, non-binding arrangement, without legal ramifications, that has shifted considerably over the years.  It is not sacred, although one might think so when listening to various news reports.

In 1967, when Israel liberated eastern Jerusalem, including the Temple Mount, then Defense Minister Moshe Dayan took action that has haunted us since.  He made an arrangement with the Jordanian Waqf that they would be given day-to-day management of the Temple Mount.  Jews would be permitted access to the Mount – without limitation as to hours – but would not pray there.

The High Court of Justice, shortly after the Six Day War, ruled that the laws of the State of Israel applied to the Temple Mount.

In 1980, Israel formally applied Israeli law to all of Jerusalem.  The Israeli position is that Israel has full sovereign control over the Temple Mount, as well as everywhere else in Jerusalem.

There has been some competition between the Palestinian Authority and Jordan over the years as to who would be in charge of those day-to-day affairs on the Mount.

When Jordan occupied eastern Jerusalem, of course, its Waqf was in place.  However, it is my understanding that at one point, briefly, after the establishment, via Oslo, of the Palestinian Authority its Waqf predominated.

By late 1994, when Israel and Jordan signed a peace treaty, it included the phrase, “Israel respects the present special role of the Hashemite Kingdom of Jordan in Muslim Holy shrines in Jerusalem.”  Clearly then, since that time, the Jordanian Waqf has been in charge, and Jordan has been paying the bills.  But a PA Waqf still exists, and I believe the Mufti of Jerusalem is PA-appointed. PA-Jordanian tensions persist.

There have been a number of significant shifts on the Mount over the years.

[] Previously Muslims prayed only at the Al Aqsa Mosque, but they now pray at the Dome of the Rock (which was not originally a mosque), and other areas on the Mount where new mosques have been constructed.

How then is “Muslim Holy shrines” is to be interpreted? Is the Waqf responsible for managing the Al Aqsa mosque, or is the entire Mount under its jurisdiction? Talk about shifting the status quo!  Jordan maintains that even the walls around the Mount, which includes the Western Wall, are under its jurisdiction.

[] While de jure Israeli law applies on the Mount, de facto it has been eroded by Muslim behavior.  Notable in this regard is the damage that has been done to antiquities on the Mount, which have been blithely dug up and destroyed.  The rules of the Israeli Antiquities Authority should apply here, but that has not been the case.  What the Muslims have gotten away with is unacceptable, and I frankly have trouble wrapping my head around this situation.

[] The hours during which Jews can go up on the Mount are severely restricted.  This is not only counter to Dayan’s original agreement with the Waqf, it contravenes Israeli law:

In 1967 a law was passed stating that, “The Holy Places shall be protected from desecration and any other violation and from anything likely to violate the freedom of access of the members of the different religions to the places sacred to them or their feelings with regard to those places.”

In 1980, this was incorporated into Israel’s Basic Law.

And yet the freedom of access of Jews to the Temple Mount, which is sacred to them, is restricted. This is an outrage, and yet it persists.

This is because, where the Mount is concerned, we are not functioning under rule of law, but rather, mob rule.  Where there is concern about Muslim unrest or violence, it’s easier to restrict the Jews’ rights.  In the Jewish State.

This is also the case with regard to Jewish prayer on the Mount. In theory, the High Court gave Jews the right to pray on the Mount, but with a proviso that made such prayer impossible. If there is a threat to public order or security, the police have the right to prevent such prayer.  And so Israeli police, unprepared or unwilling to confront the Muslim mobs, prevent Jews from praying on the Mount, arresting them if they do.

This has got to change. Over the years there has been a shift in the attitude of many observant Jews, who are desirous of praying on the Temple Mount.

Tomorrow night begins Tisha B’Av (the Ninth of Av), the saddest day of the Hebrew calendar. It is when the two Temples were destroyed – Temples that, of course, were on Har Habayit, the Temple Mount.  A number of other calamities befell our people over the generations at this time, as well.

The day is one of mourning and fasting; traditionally, people sit on the floor while reading the Book of Lamentations. 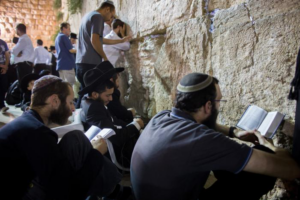 It is also a day for introspection – for we are taught that there is a direct connection between how we behave and the calamities that befall us.  God is watching.

It is because of the approach of Tisha B’Av that I’ve dealt with the particular subjects that are in this posting.

And then, individually and as a people, we must come to grips with the importance of Har Habayit and send messages to our elected officials about standing strong for our rights there.

We dare not surrender our religious inheritance through passivity or ignorance.

My wishes for a meaningful fast.