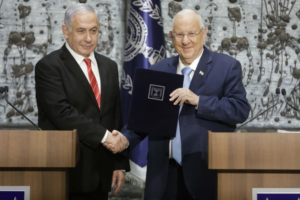 That the president acted so quickly was a surprise: he had indicated that he would likely wait until next Wednesday, the last day that it was legally possible for him to confer this mandate.  He had been hoping for a break-through in the unity talks being held between Netanyahu and Blue and White leader Benny Gantz.

The speed with which Rivlin now acted provided clear, I would say, irrefutable, evidence of his final judgement that it was a lost cause – and he had really been plugging for this.  His decision was made after one final consultation with Gantz.

Only two days earlier, Rivlin had met in his office with Netanyahu and Gantz, along with their negotiating teams, and announced that he was not going to confer the mandate for forming a government on either party.  This was because neither had sufficient mandates to form a coalition.

He declared that formation of a unity government was the only possible solution going forward and charged the parties with beginning negotiations to this end.

He instructed Netanyahu and Gantz to shake (hold?) hands for the camera, which they dutifully did.  Their picture showed up in every Israeli news report. 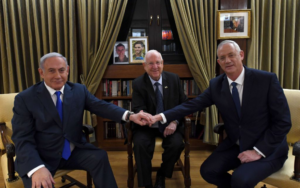 To me it felt as if abba (daddy) had instructed, “Children, play nice.”  This was for the cameras and told us nothing, short of indicating that they didn’t hate each other so much that they wouldn’t touch hands. (Actually, I think it’s Gantz who harbors the hate, but I’ll get to that.)

At any rate, the two parties got down to business; there were reports about long hours of meetings, amid rumors that “progress” was being made.  Until it turned out that there really was no progress.

One big sticking point was the question of exactly whom Gantz was negotiating with.  He insisted that it was with the representatives of Likud, alone.  Netanyahu, on the other hand, honoring his agreement with his right wing bloc, insisted that the negotiations included the haredi parties and Yamina.

Gantz’s position is that the nation had chosen his party to govern and that he could not do justice to this mandate from the people if the right wing bloc were to be folded into a unity government.  He bases his claim on the fact that Blue and White has one more mandate (33) than Likud (32).  But, as I indicated earlier, this doesn’t really wash.  The full left wing bloc has only 44 mandates, compared to 55 for the right wing bloc. If you are truly interested in honoring what the people of Israel want, you would at least attempt to find ways to work with the right wing parties.  But what Gantz and his associates want is a “liberal, secular unity government” that excludes all religious elements.

See my blog posting at Times of Israel for my response to this:

And there was also a second issue for Gantz, or so he alleged:  Within coming months, Netanyahu is likely facing an indictment regarding charges that have been leveled against him.  Gantz declared that his party could not sit with someone under indictment – that is, he could not have a rotating arrangement as prime minister with such a person.  The law, it should be noted, allows a prime minister who has been indicted to continue to serve in his role.  (One of the problems with this current situation is that Netanyahu is not being permitted the courtesy of being considered innocent until such time as a court might find otherwise.)

Rivlin suggested a complex arrangement that would have addressed Gantz’s concerns. When he announced his choice of Netanyahu to form the government, he elaborated on this:

There was more that he proposed, as well.

“This was my suggestion to solve the political and legal complications we face. That was my offer, and I’m laying it out here for the public.”

According to various reports, Netanyahu himself made several other offers, e.g., a rotation that afforded Gantz a larger period of time as prime minister.

Gantz accepted none of this because, it seems clear, he was not negotiating in good faith.  He was going through the motions and wasting the nation’s time.

This leads me to the major problem that permeated the entire campaign: It was based on personal attack, rather than being based on a genuine discussion of issues.  It was “anybody but Bibi.”

Yet Binyamin Netanyahu deserves better than this!!

Yes, he has his weaknesses (as does everyone).  His interpersonal relationships within the context of domestic politics can be problematic. There are those who don’t trust him, and those who are frustrated that he has not groomed a successor.

But this is hardly the sum total of what he represents. He has served our country well and devotedly in a host of different contexts and should be judged on his merits in this regard:

I think about his strong stance against Iran going back to a time when no one was yet paying attention.  Israel, and much of the world, owes him a debt for this.  President Trump gave a strong UN speech warning of the dangers of Iran this week (which I would love to address in greater detail at a later time).  I do not believe he would have come to this place without Bibi Netanyahu.

I think about the determined military stance Netanyahu has taken against Iran, in Syria, in Lebanon, and even in Iraq.  This should not be counted as irrelevant, ever.  What is more, I continue to remain astounded at his ability to sustain a relationship with Putin such that the Russian president looks the other way when we attack in Iran.

Get rid of Bibi now?  We are in the midst of critical times and I shudder to contemplate what would happen if someone weak and inexperienced (Gantz) were to take his place rather than sharing responsibility with him (and taking the time to learn from his experience and expertise).

So the question persists: WHERE ARE WE?

I confess to having felt a visceral gladness, a sense almost of celebration, when Netanyahu was handed the mandate. I was glad that the public knew that Gantz was the stumbling block.  And it seemed as if there was still an iota of hope that things, in Bibi’s hands, might yet come together.

Bibi himself says his chances are not good, they are simply a bit less bad than Gantz’s chances would have been.  He says he will return the mandate to the president if he is not successful in putting together a coalition. He has 28 days to do this, with an extension possible.

In the remarks he delivered after receiving the mandate, the prime minister was still pulling for a unity government and urged Gantz to come on board quickly.

Without the cooperation of Gantz, he needs to draw in six mandates somehow.

The most likely prospect is Labor-Gesher. Its six mandates would just do it. Head of Labor Amir Peretz is signaling a distinct lack of interest.  Could he be persuaded to change his mind for the good of the country, and provided that he received a significant ministry and promise of social welfare legislation?  Is he sufficiently mindful of the fact that Labor might disappear in the next election to                            take a daring chance?

Along with Peretz, Netanyahu would have to bring Gesher’s Orly Levy-Abekasis (who, by the way, is daughter of David Levy, originally of Likud).  She has severely critiqued Gantz for not offering specifics on goals for his party. After unsuccessful merger negotiations with Gantz, she said he had failed the “credibility test” and called his behavior “weird and hallucinatory.”

But she might be a hard sell, as she, too, declared she would not sit with Netanyahu if indicted.

Levy-Abekasis and Peretz on announcing their merger 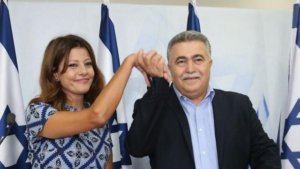 There is always Avigdor Lieberman, who might be lured in spite of all his declarations to the contrary (and all of the issues with regard to his sitting with the haredi parties).  But the prospect of bringing him into a coalition and affording him some power, some measure of success, is most unpalatable. This destructive man deserves to fail. In addition to which, he is a loose cannon who might sabotage the government at any point – after having first made huge demands.

Would Netanyahu consider this?  Could it work, to forestall another election? 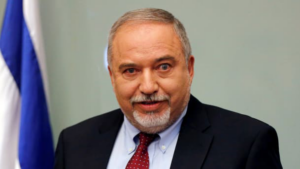 There had been talk of Netanyahu luring away one faction of Blue and White, but this seems a real stretch at the moment.  Moshe Ya’alon, whose Telem party is a constituent part of Blue and White, is very quiet these days.  Is there any possibility of his joining a coalition headed by Netanyahu? Very, very unlikely. But Ya’alon is the most right of the three constituent Blue and White leaders.

If Netanyahu cannot succeed, Gantz will get his opportunity to try, although his possibilities are close to zero.  Time enough to consider this if it becomes necessary (something I fervently hope will not be the case).

After this, forgive me for mentioning the unmentionable: there would be elections once again.  A horrible prospect in terms of the price to the country: the strain and expense. But beyond this, Israel needs a stable government, not an interim caretaker government, in order to cope with all that is facing us.

In the meantime, we are about to enter the High Holiday season, and my postings will be less frequent.

To all who are celebrating, I extend wishes for a year of sweetness and blessings.

May the sound of the shofar reverberate within your very being, and may the Almighty above hear your prayers.