From Israel: What Are They Thinking??

“They” refers collectively to Prime Minister Netanyahu, the Security Cabinet, the IDF, and perhaps other persons in leadership roles making decisions on Gaza right now.  For the life of me, I am unable to wrap my head around these decisions, or to feel remotely easy about them.

~~~~~~~~~~
Of course, I am not the prime minister, or a member of the security cabinet, or the IDF, so I allow that I may be missing something.  But consider:

A “deal” was apparently struck between Israel and Hamas, with Egypt serving as go-between.  In simplest terms, at first Israel was to allow fuel and goods, both commercial and humanitarian, through the crossings, while Hamas would “work towards” quiet at the fence. Parameters on this were leaked as an agreement in process.  Nothing was ever officially announced.  But what we have been able to see is that goods and fuel are going into Gaza.

Has it been quiet at the fence?  No.  Perhaps slightly less violent, with a somewhat smaller turnout, but still violent (and I’ll get to this).  And yet, as many as 800 trucks a day had started going in before the violence had ceased.

Was doing this a good idea?  You sure could not get me to vouch for it.  Hamas is being given a free ride. The argument is that averting a humanitarian crisis would diminish violence.  But I see this as simplistic because it ignores ideological motivation. Any diminution of violence is bound to be temporary.
~~~~~~~~~~
One of the reasons the humanitarian crisis had deepened was because the PA was not doing its part, per its obligations, to pay for electricity in Gaza and to pay salaries of certain categories of civilian workers.  And so, the other part of this unofficial “deal” involved Egyptian communication with Abbas, in order to get him to sign on to what was going on – and to secure agreement from him that the PA would pay some part of those salaries in Gaza, with Qatar paying the rest. 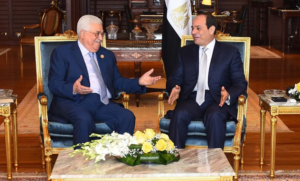 There was some indication in the news that Abbas had agreed, and then a report that he really had not, and now, the latest is that he has agreed.

There was sort of vague promise by Egyptian negotiators to Abbas that this would be the first step towards giving the PA control over Gaza again.  This was obviously to sweeten the deal, but it remains totally unclear to me how Abbas could believe this would be so, if Hamas was being cut slack and thus strengthened.

This is simply one of a multitude of factors that do not make sense to me in this situation.  But hey, who am I to expect to make sense of this?
~~~~~~~~~~
We know that there is some sort of agreement with Abbas because of what happened subsequently:

By the end of last week news had broken that on Friday $15 million in cash, carried in three suitcases, had moved by car from Israel through the Erez Crossing into Gaza.  This could not have happened without Israel’s approval.

This was Qatari money (my best information is that the funds came into Israel via a private Qatari plane) and Mohammed al-Emadi, the chairman of the Qatari Committee for the Reconstruction of the Gaza Strip and Qatari ambassador to Gaza, accompanied the funds as they made their way into Gaza.

This information was not exactly well received by all parties in Israel. Minister Naftali Bennett (Chair Bayit Yehudi), for example, said “The way it was done, it’s protection money.” 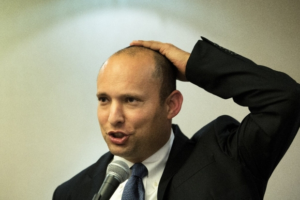 Some have suggested that the image invokes a mafia pay-off.

The funds have been designated to pay salaries of civil servants in Gaza, and there are supposed to be representatives of Qatar supervising payments and maintaining lists of those eligible.

Apparently Abbas had demanded that the PA serve as the conduit for the funds and vet those who would receive the funds, but Qatar moved ahead without PA involvement.

There have been news reports of concern inside of Israel that the money might be used in part by Hamas to strengthen its cache of rockets.  This concern is bolstered by the fact that Qatar has been a strong supporter of the Muslim Brotherhood and Hamas.  And Qatar is going to supervise the payment of salaries.
~~~~~~~~~~
This is what commentator Avi Issacharoff had to say about this situation (emphasis added):

“The images from Gaza on Friday showing hundreds of Hamas administration employees lining up to receive their salaries represent an important victory for the terrorist organization and its leaders, even if only a temporary victory.

“Hamas leader Yahya Sinwar delivers what he promises, the images seemed to show.

“Not only did the salaries of Hamas officials arrive, but the money entered the Strip with the blessing of the Israeli government — which, in the eyes of the Gazan public, has succumbed to the pressure created by thousands of protesters gathering at the border fence on a weekly basis, sending incendiary balloons and laying explosive charges.

“In other words, for the umpteenth time, the Palestinian public has received decisive proof that the Jews only understand force.

“After all, the way they see it, those same salaries could have been allowed into the Strip many months ago, either secretly or not, with the help of Qatar, but Israel chose not to allow this. And when did Israel’s position change? When the fields on its side of the border went up in flames, and fears of war became a reality.”

https://www.timesofisrael.com/israel-and-hamas-cheer-qatari-infusion-but-abbas-could-spoil-the-party/
~~~~~~~~~
So we are back to the question: What are they thinking??  Or should I ask, ARE they thinking?  That is, beyond a small window of time going forward.

When boarding a ~plane for Paris, for a celebration to mark the hundredth anniversary of Armistice Day, Prime Minister Netanyahu defended the decisions that have been made, saying the goal was to avoid a humanitarian crisis and keep the calm.

https://www.timesofisrael.com/en-route-to-paris-netanyahu-defends-qatari-cash-shipments-into-gaza/
~~~~~~~~~~
Of course, there is a good likelihood that there are motives beyond simply “keeping the calm” at work here.  I have alluded to them before:

Israel’s actions might be linked to the US “peace plan.” Jason Greenblatt has been talking it up big-time, and it would not be beyond reason to suspect that he would urge Israel not to go to war now, as this would upset the equation.  We don’t know this, it is speculation: but a reasonable speculation.

Then there is the desire of our government to forge stronger ties with the Gulf States, ties that likely underlie the “peace plan,” I would suggest.  This might be a motivating factor as well.

Lastly, there is the issue of Abbas and the PA.  Israel has no desire to see the PA strengthened immediately prior to the unveiling of the “peace plan.” This too might be a factor.
~~~~~~~~~~
Before turning to other issues, I add just a few additional pieces of information with regard to Gaza:

When, Qatar’s Mohammed al-Emadi, who had accompanied the money into Gaza, went to view what was going on at the fence on Friday, he was pelted with stones.

According to media in Gaza, those participating were from the Popular Front for the Liberation of Palestine, but this gives us a hint as to how volatile the situation remains. That this happened may have been a good thing, as Qatar subsequently told Hamas it’s time to stop the violence at the fence.
~~~~~~~~~~
In terms of that violence, on Friday, a terrorist broke through the fence and went far enough to set fire to a greenhouse owned by Udi Dreilich of Moshav Netiv Ha’asara.

“All the equipment I had, which I collected over the years – everything was burned.” 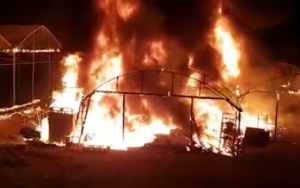 And the latest news regarding Israeli concessions to Hamas is this, according to the Lebanese paper Al Akhbar (not confirmed elsewhere as I write):

Israel and Qatar have agreed in principle to opening a sea route from Cyprus to Gaza. Reportedly it would be under “international” supervision, with Israel monitoring security.  This idea is not new, but details are vague.

https://www.ynetnews.com/articles/0,7340,L-5395425,00.html
~~~~~~
I will return in short order to look at what has transpired in Paris with the Armistice celebrations; Netanyahu met briefly with Putin, which is a matter of considerable importance, and our prime minister had a good deal to say on other issues.

Here I want to update and clarify a bit more with regard to the midterm elections:

I would like to make mention of Rep. Eliot Engel (D- NY 16th District), who has served in Congress for many years and just won his latest election, uncontested.  He is solidly pro-Israel and I have known him over the years as a man of integrity.

He is likely to head the House Foreign Relations Committee (he was the ranking Democrat). 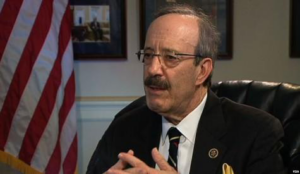 In my last posting I alluded to Ilhan Omar, a refugee from Somalia, and wrote that she would be representing a district in Michigan, but that was a typo; she is from Minnesota.  (The Palestinian-American Rashida Tlaib is from Michigan.)

Since writing, I came across this quote from Omar from 2012: “Israel has hypnotized the world, may Allah awaken the people and help them see the evil doings of Israel.” She subsequently referred to Israel as “apartheid.”  So, it is clear who we are dealing with.

https://unitedwithisrael.org/muslim-democrat-running-for-congress-blames-israel-for-evil-doings-in-gaza/
~~~~~~~~~~
I close today with a personal recollection, something I rarely do.  I write simply to share, and not in expectation of any response from my readers:

My mother, may her memory be blessed, was born on the day WWI ended.  She lived to a ripe old age. But had she lived a bit longer, she would have been celebrating her 100th birthday today, just as the world is marking the 100th anniversary of the end of the war.  I thought about this most of the day today.
~~~~~~~~~~