From Israel: War in the Blink of an Eye!

How many times in the last weeks have I written that war with Hamas in Gaza was inevitable and surely coming?

And how many times did that expectation fizzle, in spite of what was happening at the fence?

On Sunday night, events turned in a blink.

An elite IDF special forces unit had gone into Gaza to gather information – it was not, we are being told quite explicitly, out to do a kidnapping, as some have suggested.  The unit had infiltrated to Khan Yunis in the south of Gaza, when something went wrong: They were spotted by Hamas fighters and attacked.  A battle ensued, with IAF planes coming in to lend support.

In the end, seven Hamas terrorists were killed, including Nur Barakeh, commander of the eastern battalion of Hamas’ Izz Al-Din Al-Qassam Brigades in Khan Yunis.
~~~~~~~~~~
Israelis were first told that everyone in that elite special forces unit had come out of Gaza (this was emphasized because there had been rumors of a kidnapping).  It was only subsequently that we learned that one member of the unit had been wounded and that an officer had been killed: The highest ranking officer to be killed in action since Operation Protective Edge in 2014, he is being referred to as Lieutenant Colonel M.   Full information about him remains classified for security reasons.

Many national figures responded to this news (all emphasis added):

Chief of Staff Lt. Gen. Gadi Eisenkot said that the IDF “owes M. more than can be said.”

“What was made public tonight is the tip of the iceberg of actions aimed at solidifying Israel’s superiority. The extraction of the forces was an act of courage that will be discussed in extent in the future.

“Actions of this sort are considered heavily, and usually remain under the radar.”

“I bow my head on the fall of Lieutenant Colonel M., a glorious fighter who fell tonight in the IDF operation in the Gaza Strip. A day will come and all of his might will be told. The citizens of Israel owe him a huge debt. Our forces acted valiantly tonight.”

http://www.jewishpress.com/news/israel/idf/eisenkot-israel-owes-lt-colonel-m-more-than-can-be-said/2018/11/12/
~~~~~~~~~~
Pictures appeared in the news of President Rivlin kissing the children of Lt. Col. M at his funeral (a closed event that was attended by thousands): 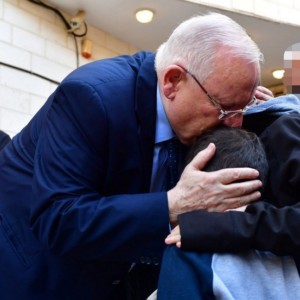 ~~~~~~~~~~
And so we learned that we had lost a very brave officer, but the nation learned something else as well, which is usually under the radar:  Intelligence missions are carried out regularly. We are not in the least passive, but superbly well prepared for war even as our leaders are intent on preventing it, if possible.

Former IDF Chief of Staff Benny Gantz confirmed this on Army Radio: “…operations of this sort have been and will continue to be carried out all the time, as they are necessary for Israel’s safety.”
~~~~~~~~~~
During funerals for the terrorists killed by our forces, thousands screamed for revenge. 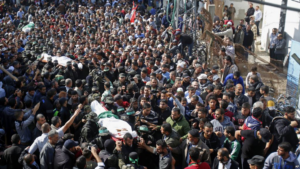 And, indeed, after the funeral, Izz ad-Din al-Qassam Brigades, the armed wing of Hamas, put out a statement:

“In response to yesterday’s crime, the joint command of Palestinian factions announces the beginning of bombardment of the enemy’s settlements with scores of rockets.”

Following an early bombardment that was relatively light, late Monday, Hamas launched some 400 rockets and mortars within one hour. The rockets traveled over a considerable range, so that the alarm was sounded as far as Kiryat Gat, Hevron and the area near the Dead Sea.

Normal life halted in the south, with everyone advised to stay near shelters – actually, with everyone running in and out of shelters. Iron Dome took out many of the rockets.  And yet we had several casualties: a woman in Ashkelon was critically injured when her home was hit. Some 20 others were wounded, and one person was killed.
~~~~~~~~~~
Prime Minister Netanyahu had returned from Paris in a rush at the news of the incident inside Gaza, and met yesterday for an extended period with the Security Cabinet. 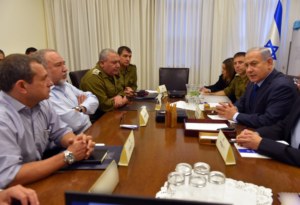 A green light was given for a heavy response to the Hamas hostilities, and Gazans were warned on an Arabic Facebook page that we would be responding with “an iron fist.” In short order the IDF attacked 70 targets.

Among the targets that have been hit are the headquarters of the Hamas-affiliated Al-Aqsa TV, which was used for military activities, including sending messages to terror operatives, and military intelligence headquarters in northern Gaza.

The Security Cabinet is meeting again today to further determine the direction this war should take. My information is that reservists are being called up; this indicates not only intention to keep going, but suggests a ground operation.
~~~~~~~~~~
The mood here is somber.  There is not, there never is at such moments, a sense of jubilation that we are at long last hitting Hamas.  There is rather, a resigned recognition that what is being done must be done:

Ein breira.  There is no choice. We cannot sit still for what has been going on.

But, as I have frequently pointed out, we all have relatives and friends who are serving. And so there is a heaviness of heart.
~~~~~~~~~~
There are those who suggest that once one of their commanders was killed, Hamas had no choice but to attack us. But they might have launched a handful of rockets and called it quits. That they chose to launch 400 rockets in an hour was a clear indication of their intentions to generate a major escalation.  They are out for blood.  And this, after Israel permitted not only supplies through the crossing, but also $15 million.

Were we to pull back too quickly in the face of this, it would be huge mistake, in my opinion.  And that certainly seems to be the opinion of the Security Cabinet.  Hamas must at long last be weakened severely.

I am delighted to note that Israel has rejected the mediation of Egypt and the UN at this point.

This is perhaps a mark of our seriousness, at long last. We are tired of the UN mediator, who now says restraint must be shown by all.

It is for me ironic that immediately before this began, Prime Minister Netanyahu was in Paris, where, in public statements, he spoke about all Israel was doing to “avoid an unnecessary war,” even as he acknowledged that true peace with Hamas is not possible.

This plays to our favor now in the realm of public relations.  I consider it quite likely that Netanyahu knew this day was coming.

The US is solidly with Israel.
~~~~~~~~~~
There are always miracles as we fight our wars, and already we have had our first one:

Hamas launched a Russian-made Kornet anti-tank missile at a soldiers’ bus, but the bus was empty, as the soldiers had disembarked just moments before.

One soldier, standing near the bus, was seriously injured and has already had two surgeries to stabilize him. 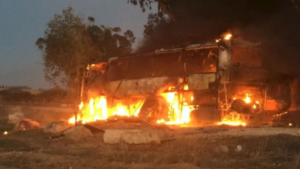 ~~~~~~~~~~
As I prepare to put this out, there is a report on the willingness of Gaza factions to call a halt. Who knows?  This would be too soon to have done them the damage that must be done.  I will put this out.

And I ask you, please, to pray for our soldiers.