I do not doubt that many of you are wondering about the title of this posting, which may seem more than a bit enigmatic.

Uti possidetis juris is a term that refers to a doctrine in customary international law. And in a moment my reference to it will become quite clear.

On Tuesday, Mahmud Abbas went to speak before the UN Security Council in order to vociferously criticize President Trump’s “Deal of the Century.”

Abbas with a map at the Security Council 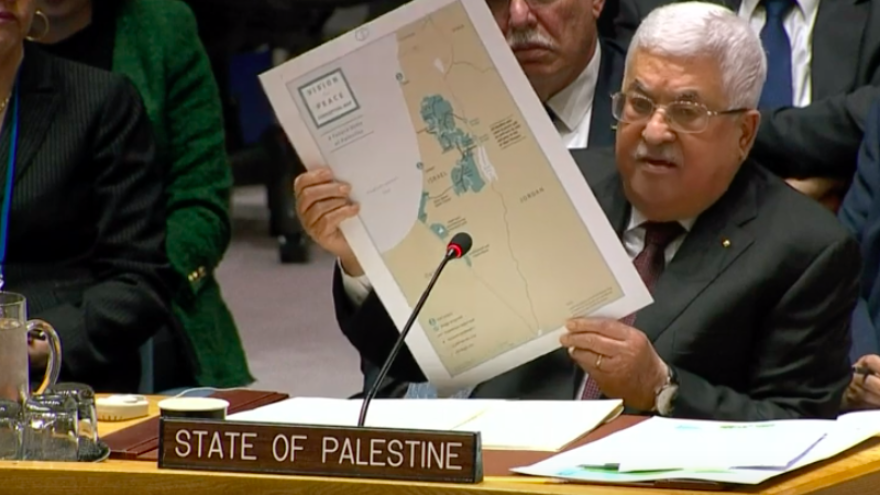 He pulled out all of the stops, making the charges we are already familiar with regard to Palestinian Arab “rights” to the land (emphasis added):

“This plan violates international legitimacy… It annuls the legitimacy of Palestinian rights, our right to self-determination, freedom and independence of our own state…

“It legitimizes what is illegal ‒ settlements and confiscation of land and annexation of Palestinian land.”

The plan is “the entrenchment of occupation and confiscation of occupying force by military regime… strengthening the apartheid regime.”

Anyone who is even remotely familiar with Israel knows that the accusation of “apartheid” is total nonsense. Israeli Arabs have full civil rights in the land, and mix freely and openly with Israeli Jews.  This charge is simply a libel.

If you need to know more, go to the videos on my website: https://www.arlenefromisrael.info/videos/ and scroll down to “Understanding Who We Are” – “Exposes the lies of BDS.”

The major issue here is the claim by Abbas that Israel has “occupied” Palestinian land.  And this is where uti possidetis juris comes in.

This concept was explained in a major report co-authored in 2016 by law professors Avi Bell (pictured) and Eugene Kontorovich. Kontorovich is Director of the International Law Department at the Kohelet Policy Forum here in Jerusalem, and Bell is a Senior Fellow in International Law at Kohelet.

The abstract of that report reads (emphasis added):

“Israel’s borders and territorial scope are a source of seemingly endless debate. Remarkably, despite the intensity of the debates, little attention has been paid to relevance of the doctrine of uti possidetis juris to resolving legal aspects of the border dispute. Uti possidetis juris is widely acknowledged as the doctrine of customary international law that is central to determining territorial sovereignty in the era of decolonization. The doctrine provides that emerging states presumptively inherit their pre-independence administrative boundaries.

“Applied to the case of Israel, uti possidetis juris would dictate that Israel inherit the boundaries of the Mandate of Palestine as they existed in May, 1948. The doctrine would thus support Israeli claims to any or all of the currently hotly disputed areas of Jerusalem (including East Jerusalem), the West Bank, and even potentially the Gaza Strip (though not the Golan Heights).” 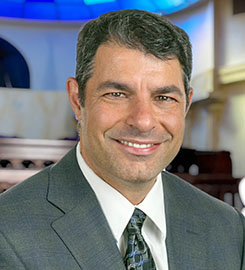 The last legal boundaries of Palestine before the State of Israel was declared were those of the Mandate for Palestine, which was assigned to Britain. Recognizing the area as a Jewish homeland in which Jewish settlement was to be encouraged, it was adopted unanimously in 1922 by the League of Nations; this was an article of international law.

Subsequent to this, Britain cut off part of the Mandate land and awarded it to the Hashemites from Saudi Arabia – this area became Jordan, and how this came about is perhaps a subject for another day.

What remained of the Mandate for the Jewish homeland ran north-south from Lebanon to the Gulf of Aqaba, and east-west from the Jordan River to the Mediterranean Sea, and included Gaza: 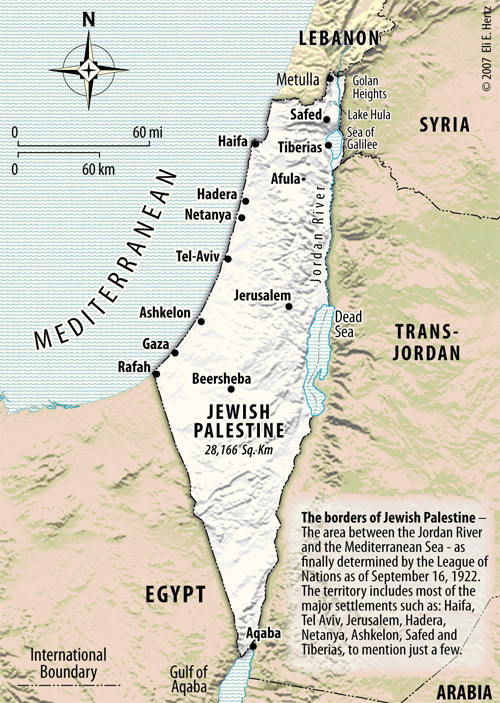 (UN GA Resolution 181, passed in 1947 and commonly referred to as the partition plan, had no effect on this.  This is first, because General Assembly resolutions are only recommendations and not binding, and then, because the Arabs refused it and cannot legally return to make demands based on this – even though they keep trying to do this.)

When Israeli Independence was declared in 1948, the Mandate ended.  And this is where uti possidetis juris applies:  According to customary international law, Israel inherited the borders of the Mandate.

Of course, the Arabs attacked immediately, and by the time the war ended in 1949, Jordan had occupied Judea and Samaria and eastern Jerusalem; this occupation was illegal. Israel’s legal borders had not changed.

The temporary armistice line that separated Israel from Jordan in 1949 is what Abbas and his cronies refer to as “the ’67 border.” This is nonsense, as there was no “border.” In point of fact, when Jordan broke the armistice in 1967, crossing over that line to attack Israel, the line was rendered legally non-existent.

When Israel took Judea & Samaria and eastern Jerusalem in the Six Day War, this meant simply moving into Mandate territory – liberating it from an illegal occupier.  There had been no other legal possessor of the land.

Customary international law refers to the way things are done internationally. Eugene Kontorovich (pictured) frequently points out, with great effectiveness, how one practice prevails routinely across the world, but another standard or practice is applied just to Israel. 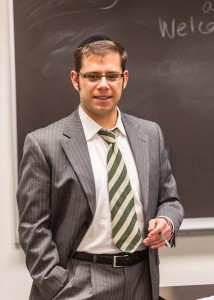 And so, Abbas can jump up and down, and stand on his head: The land is ours.  There has never been a Palestinian state (and please Heaven there won’t be one now).

And consider this, which is part of the illogic of Abbas’s claim: He talks incessantly about the “’67 border.” But that armistice line was between Jordan and Israel.  Palestinian Arabs were not part of the equation. If the argument were to be made that Israel cannot move past that line, it would be Jordan possessing the land on the other side, not a Palestinian state at all.

For those who imagine that a “two state solution” can be negotiated with the Palestinian Arabs, I offer this from Palestinian Media Watch: Fatah Central Committee Member Tawfiq Tirawi arguing that all the land is “wakf,” holy Muslim land, from the river to the sea.

Originally, in conjunction with Abbas’s speech, the PLO had intended to call for a vote in the Security Council on a resolution condemning the “Deal of the Century.” That resolution, which had been watered down several times, was withdrawn.  The Palestinian Arabs deny it was because they knew they had insufficient support. Enormous pressure had been brought to bear on voting members of the Council by Israel and the US.  (The US, of course, is also a member.)

Israel’s Ambassador to the UN Danny Danon provided a strong retort to Abbas’s speech at the Security Council (emphasis added):

“If Abbas was truly interested in peace, he wouldn’t be here, he would be in Jerusalem.”

Abbas should “use this opportunity to start direct negotiations. Complaining, instead of action – that is not leadership. Abbas says he wants sovereignty for the Palestinian people, but he has done everything to avoid it. The call for sovereignty has become a battle call, rather than an actual goal, a way to keep the conflict alive.”

“The only way to promote negotiations starts with them condemning terrorism and stopping incitement…” said Danon. 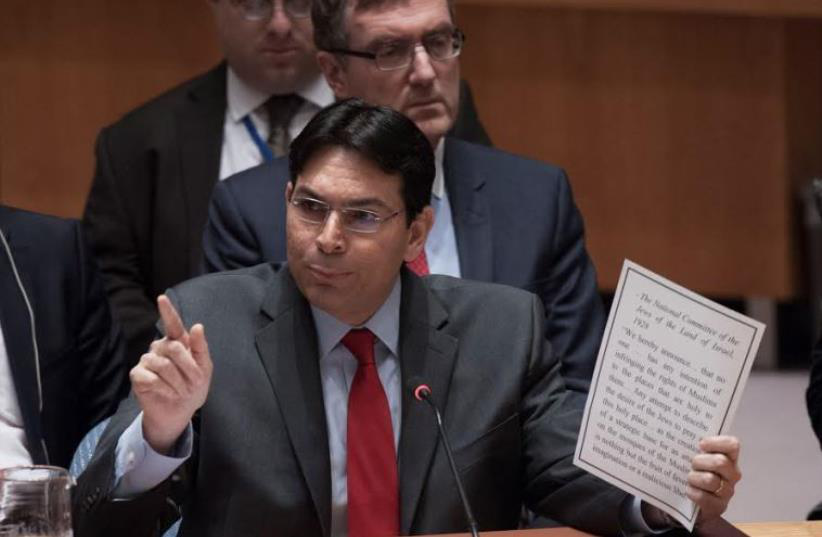 On Wednesday, the UN High Commission on Human Rights, a vile anti-Israel group, put out a “blacklist” of companies that do business over the 1967 line (that line again!).  For three years the US and Israel worked to prevent this from happening.  This action now is in response to Trump’s “Deal,” which recognizes Israeli rights over that line.

The list includes 112 business entities – 94 located in Israel and 18 in six other countries – the United States, Great Britain, France, the Netherlands, Thailand and Luxembourg.

The list was compiled by the Office of the UN High Commissioner for Human Rights (OHCHR) Michelle Bachelet, and will be presented at the next session of the Commission that begins on February 24.  The list included major international food conglomerate General Mills, which produces world-renowned brands such as Cheerio’s cereal and Häagen-Dazs ice cream; American hospitality company Airbnb; communications company Motorola Solutions; and transportation company Egged, along with many others.

The list has no legal import as it stands, but will be utilized politically and in other venues.

Israel which had previously withdrawn from the Commission, as had the US, because of its anti-Israel stance, is now breaking off all contact with Bachelet.

Israel is the only country against which such a list has been complied.

The PA, of course, views this as a victory.

“We will pursue companies listed in the report legally through international legal institutions and in courts in their countries for taking part in human rights violations in Palestine,” PA Prime Minister Mohammed Shtayyeh said. Palestinians will “demand compensation” for the “use of our occupied land illegally.”

While a representative of Human Rights Watch, another vile organization, said:

“The long awaited release of the UN settlement business database should put all companies on notice: to do business with illegal settlements is to aid in the commission of war crimes… The UN’s top rights body should ensure that the database is regularly updated to assist companies in complying with their international legal obligations.” 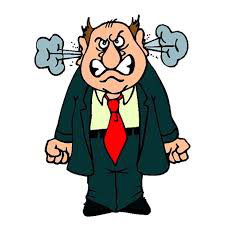 “These companies have done nothing wrong, and many are involved in providing goods and services to Palestinians pursuant to the Oslo Accords.

“This list was made in conjunction with pro-BDS and PFLP-linked NGOs. The maligned companies should begin assessing plans to take legal action against the UN officials who prepared the list and those who will propagate its false claims.”

And everyone should be encouraged to patronize these companies.