From Israel: “Unstable and Scary”

We cannot pretend otherwise: There is a great deal happening that evokes a very deep unease.  This was my theme in my last posting – the sense that matters are not as we might wish them to be.

I will share below a number of issues of concern in this regard. But it’s not all bad.  Sometimes what appears to be “instability” turns out to be flux that leads to something better.  And sometimes (although not nearly often enough) good stuff happens.

We begin with some of that good stuff:

In 2006, an archeological discovery was made at the City of David – an ancient road was uncovered.  With a major dig that took place starting in 2013, it became clear that what had been discovered was the road  pilgrims used three times a year – on Pesach, Shavuot and Sukkot – to approach the Temple.  This was 2,000 years ago. Beginning at the Shiloah Pool (where pilgrims washed), it moved via steps up to Robinson’s Arch, adjacent to the Western Wall, where additional steps led to the Temple itself.

You can see more about this here.  Including a brief video narrated by Doron Spielman, Vice President, City of David.

Says Spielman: “This is the heart of the Jewish people.  This area is not negotiable.”

On Sunday, June 30th, the road ‒ dubbed “Pilgrimage Road” ‒ was officially unveiled with a ceremony attended by many dignitaries and persons of importance.  (It is not yet open to the public but will be.) A final wall had to be broken through to expose the road.  Among those wielding the sledgehammer to break that wall were US Ambassador to Israel David Friedman and US Envoy Jason Greenblatt (right, below). 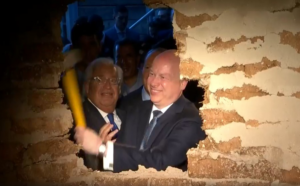 “Whether there was ever any doubt about the accuracy, the wisdom, the propriety of President Trump recognizing Jerusalem as the capital of Israel, I certainly think this lays all doubts to rest…

“It confirms with evidence, with science, with archaeological studies that which many of us already knew, certainly in our heart: the centrality of Jerusalem to the Jewish people…

“The spiritual underpinnings of our society, the bedrock of our principles in which we honor the dignity of every human life came from Jerusalem. This place is as much a heritage of the US as it is a heritage of Israel.” 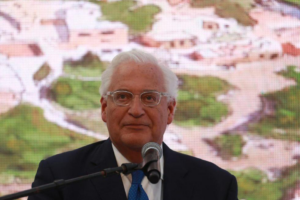 The Pilgrimage Road was excavated under houses in the predominately Arab village known as Silwan (from “Shiloah”), outside the southern end of the Old City of Jerusalem. The Arabs are up in arms – charging that Israel is attempting to “Judaize” Jerusalem and destroy its “Arab” nature.  What they conveniently ignore is the fact that the Arab layer was built on top of a Jewish layer, which predated it.

Jason Greenblatt responded to this in a tweet:  “We can’t ‘Judaize’ what history/archeology show. We can acknowledge it & you can stop pretending it isn’t true! Peace can only be built on truth.”

Greenblatt and Jared Kushner surely are not harboring genuine expectations of a Palestinian Arab embrace of their peace initiative: Following the Bahrain economic workshop, the PA detained Saleh Abu Mayaleh, a Palestinian Arab businessman from Hevron who had attended. PA security forces raided the homes of three other Palestinian businessmen, as well, in an effort to arrest them. Abu Mayaleh was released after a threatening letter was sent from the US Embassy.

Another Palestinian Arab participant said those few Palestinian Arabs who had attended felt “great danger.”  A Palestinian security official, who spoke anonymously, said the businessmen’s participation in the conference was “tantamount to betrayal.” And “betrayal,” of course, is punishable by PA law.

There is a theory floating that suggests the goal of the Bahrain conference was never to entice the PA to cooperate, but rather, to expose the PA as the source of the problem.

“Yes, the West and now the Arab world want peace, but instead of seeing this as Israel not giving enough, the Palestinian attempt to get the world to boycott a conference meant to help them showed that they are the obstacles to peace, not Israel, which was publicly eager to participate.

“Israel and the Gulf states are looking at what a peaceful future might look like – and the only way to get there is to bypass or replace the obstacles.”

Could be.  My problem with this thinking is that it means Kushner and Greenblatt expended enormous time and effort on something they knew upfront would not work.

My take (for whatever it is worth) is a bit different: I suspect that the team began with great sincerity and great naiveté, believing that they could achieve the impossible. Along the way, however, the behavior of the PA disabused them of their hopeful expectations: They wised-up when it became obvious that Abbas and company would not even discuss economic assistance.

And here is where this team is different from all the others that preceded it: They are not pondering how they can be more conciliatory and offer even more. They know how much they have already offered. Very quickly then, they began assuming a “take it or leave it” approach, which will ultimately diminish PA’s political power.

I cited Greenblatt recently, who said that it would not be productive if Israel were to take unilateral steps “at least until the peace plan is announced.”  Were Israel to have taken such steps, it would have provided the PA with an excuse to not cooperate.  But when the PA refuses to cooperate anyway?  I said then, and still suspect, that when the time is right Greenblatt will tell our government, “Go for it!”

Then there is the statement of President Trump of just days ago, indicating that there will never be an Israeli-Palestinian peace agreement if one is not negotiated during his presidency. 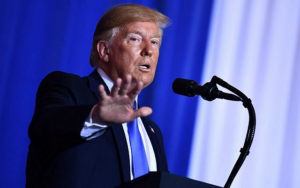 He says he thinks there is still a good chance there will be a deal, and one must wonder if he can possibly mean this.  What I am reading is a declaration that the US is at the end of the line: No more trying after this, no further concessions.

Just days ago, Bahrain Foreign Minister Khalid bin Ahmed al Khalifa said the conference could be a “gamechanger”:  “Israel is a country in the region… and it’s there to stay, of course… we want better relations with it, and we want peace with it…” 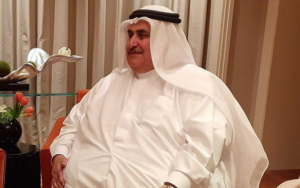 “You must send the correct message to the person you want to address and solve a problem with. That is the Israeli people.”

I believe pressure was applied to Al Khalifa to modify his statement.  And what this means is that, for all the talk, we are watching a process but we are not there yet with regard to the PA having rendered itself irrelevant to the Gulf States with its obstructionist behavior. Expect complications ahead.

Last week, I wrote about the horrendous increase in incendiary balloons being launched from Gaza. In total in the course of just days, some 100 fires were ignited inside of Israel by these balloons. 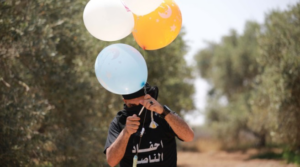 Israel had been attempting to control the situation by limiting the fishing zone for Gazan fishermen.  When that did not work, Israel cut off the Qatari-funded fuel being pumped into Gaza, resulting in a cut off of electricity provided by generators.

Thursday night an announcement came from the Gazan news agency Sawa that Hamas and Israel had reached an unofficial agreement—mediated by Egypt and the UN—to restore calm to the Gaza border. There was no comment from Israel on this, but there never is.

It was said that Israel would resume the flow of fuel to Gazan generators and expand the fishing zone, and that Hamas was committed to halting the incendiary devices and reining in the weekly border “protests.”  According to one report, the Hamas commitment was to take effect as of Friday morning; elsewhere a report indicated that Hamas had 48 hours.

On Friday, according to an unnamed Israeli official, Israel permitted entry of fuel into Gaza again, and expanded the fishing zone.  Also on Friday, 7,000 Gazans “protested” at the fence, with rocks thrown at IDF soldiers.  There was at least one attempt to breach the fence and an IDF jeep was set ablaze by protesters throwing an explosive device. And 14 fires in southern Israel were sparked by balloons.

During the Cabinet meeting on Sunday, the prime minister, describing actions that have been taken against Gazan violence, said:  “If we need to, we will employ much harsher measures.”

We shall see.  As I write, the violence has abated, for how long I cannot say.  For all the tough talk, we have drifted into “conciliation” mode once again (which signals a lack of resolve to Hamas leaders):

There are reports in the Hebrew media about Netanyahu having approved the first step of a project to build a 40-dunam international field hospital campus near the Erez Crossing to treat Gaza patients.  It would be funded by a private (unnamed) American organization, and managed by an international medical team.

Apparently, the unofficial agreement calls for “significant projects” to begin in the coming days.” (Read: stop being violent and we’ll do nice things for you.)  I do not know what else may be in the offing.

It’s a bewilderment, a source of frustration and anger – the reluctance of our government to take on Hamas in serious terms. Netanyahu insists that he has his reasons and knows what he is doing.  There is reason to wonder: is it pressure from the US government that holds him back, or reluctance to start a war when another election is coming down the road?

Or is it a conviction that what’s going on in the north must take precedence?

According to Syrian media (Israel does not confirm such reports), on Sunday night “Israeli warplanes fired missiles at Iranian and Hezbollah military targets in the town of Kiswah southwest of Damascus, in Sahnaya, a neighborhood of the capital, in Homs and in Tartous…

“According to the Syrian defense ministry, the attack was launched from Lebanese air space… At least six cruise missiles were fired from the direction of the Mediterranean Sea towards Homs and Damascus…”

It is believed that the target was advanced weaponry; our prime minister does not hesitate when it comes to this sort of action.

“This is the first attack after the tripartite meeting of national security advisers last week [Israel, the US and Russia, in Jerusalem], and from here one can understand that the Russians are silently accepting the continued attacks.”

Lastly, with regard to the north, Avi Issacaroff writes:

Hezbollah “is threatening to conquer the Galilee even after its greatest asset [the tunnels] was destroyed, and likely still has a plan to take border towns, army posts…”

“The United Nations International Atomic Energy Agency has confirmed a claim by Iran that it has, in fact, amassed a stockpile of more than 300 kilograms of uranium enriched to 3.67 percent, in violation of the JCPOA (Joint Comprehensive Plan of Action) nuclear deal it signed with world powers in 2015.”

As is his practice, Netanyahu spoke out about this, calling on European nations to apply sanctions and pledging that Israel would not allow Iran to go nuclear.

My friends, stability for Israelis begins with our domestic situation, and formation of a strong, responsive government.  We are not there now, which is troublesome.  When next I write, I hope to look at some of the major political issues.