On Saturday night, the IDF destroyed yet another tunnel running from Gaza into Israel. This one originated at Rafah, at Gaza’s border with Egypt, and ran some 600 meters into Israel. It was constructed by Hamas, not Islamic Jihad; reports identified it as different in construction from most of the other tunnels we have dealt with. 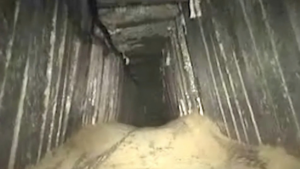 The tunnel was “unreal” for a couple of reasons.

The first is because it ran under the Kerem Shalom crossing between Israel and Gaza.  This is the crossing utilized by as many as 800 trucks per day (this is not a typo) bringing supplies into Gaza for the people there – food, fuel, medical equipment, textile products, etc., all civilian goods except those that are dual use  It is, quite literally, their lifeline to the outside.

Now, by jeopardizing that lifeline, Hamas has once again demonstrated its total indifference to the welfare of the people.  There is speculation that Hamas thought Israel would never anticipate a tunnel in this location.  Israel identified it via a combination of advanced technology and intelligence.

Not only did this tunnel run under the crossing, it also ran under diesel and gas pipelines feeding into Gaza.

https://www.timesofisrael.com/idf-says-it-destroyed-a-hamas-attack-tunnel-in-southern-gaza/
~~~~~~~~~~
Saturday night, Israel closed Kerem Shalom, indicating that a security assessment was necessary, but not offering specifics beyond this.  Israeli jets then entered Gaza airspace and took out the tunnel shaft, destroying it in a precision bombing near Rafah. (The Egyptians had been notified.)  At the same time, there was an operation to take out the portion of the tunnel that was in Israel.

The crossing remained closed on Sunday.
~~~~~~~~~~
The other reason this was “unreal” was because this tunnel circled back into the Sinai.

The other tunnels into Israel we took out recently originated from Khan Yunis and moved directly into Israel.  But because this tunnel came from Rafah under the Kerem Shalom crossing, it entered Israel right at the edge of the Egyptian Sinai.

The tunnel was able to enter Israeli territory and then move into the adjacent Sinai. 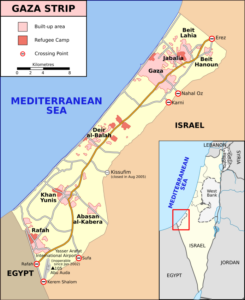 There probably was some intention of utilizing this tunnel for terrorism inside of Israel.  But it is believed that its main purpose was smuggling of strategic weaponry – primarily missiles – into Gaza for a future war with Israel.  The weapons were to be sent from Iran, by way of the Red Sea, across the Sinai. 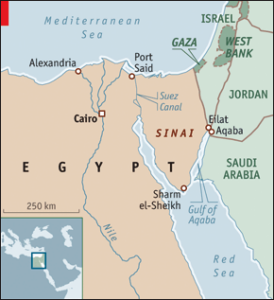 (Yes, I know this map says “West Bank,” not Judea and Samaria, but it illustrates my posting well.)
~~~~~~~~~~
It goes without saying that the Egyptians are considerably less than pleased by this turn of events, which represents a major deception by Hamas.

Eager to cut off interaction between Hamas in Gaza and ISIS in the Sinai – and thus prevent Hamas assistance from being transmitted to ISIS – Egypt flooded tunnels leading between Gaza and Sinai in the Rafah area.

The Egyptians have an orientation that is essentially hostile to Hamas, an off-shoot of the Muslim Brotherhood.  However, the Egyptians had of late been looking the other way on this, because a commitment of cooperation regarding ISIS had been secured from Hamas.

The Egyptians were even involved in reconciliation negotiations between Hamas and Fatah. The deal was signed in Cairo last October. 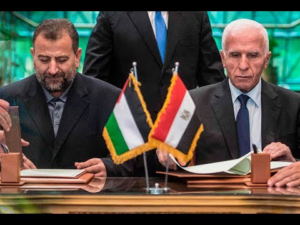 It is obvious to the Egyptians that the Hamas tunnel into the Sinai had to have been constructed with the knowledge and presumably tacit agreement of ISIS.

It’s a good guess, then, that the Egyptian stance towards Hamas is about to change significantly.

https://www.i24news.tv/en/news/israel/diplomacy-defense/165160-180114-analysis-destruction-of-smuggling-tunnel-shows-hamas-tried-to-deceive-egypt
~~~~~~~~~~
At the same time, it is eminently clear to Hamas that their premier weapon, the terror tunnel, is being systematically shut down by Israel.  With the destruction of this last tunnel, they have lost a significant asset.

Coordinator of the Government’s Activities in the Territories (COGAT) Maj. Gen. Yoav Mordechai declared in Arabic to an Arabic satellite TV station yesterday that it is “Israeli genius” that came up with the solution to the tunnels. 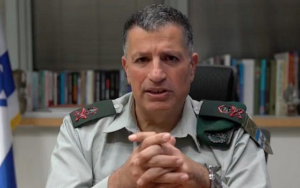 Yet, there continues to be a mixed opinion by analysts as to what the next Hamas move will be. Some project a Hamas attack soon, in order to utilize whatever tunnels still remain, before they are all discovered and dismantled by Israel.  Others say Hamas is simply not eager for an escalation of hostilities at this time.
~~~~~~~~~~
Before leaving the subject of Hamas, I share this:

I recently wrote about signs that the moribund Hamas-Fatah reconciliation could yet be revived by a new Hamas position: reports had surfaced indicating that Hamas had reversed itself and would be ready to surrender its considerable weapons cache to the control of the PA, in exchange for a leadership role in the PLO.

But now this appears less likely.  The PLO has called of meeting of the heads of all its factions, to discuss the best response to Trump’s recognition of Jerusalem as Israel’s capital.  Hamas, though not a member, was invited, but declined to come.

The statement put out by Hamas, declaring continuing “commitment to unity,” said that:

“The conditions under which the committee will be held will not enable it to carry out a comprehensive and responsible political review, and will prevent decisions that reach the level of our aspirations.”

A partial explanation: Hamas wanted the meeting outside of PA territory because of unease about Israel intervention. The meeting began Sunday night in Ramallah.

https://www.timesofisrael.com/hamas-says-it-will-not-attend-palestinian-meeting-on-jerusalem-recognition/
~~~~~~~~~~
Mahmoud Abbas addressed the opening session of that emergency meeting of the Central Committee of the PLO factions, and his words were vintage Abbas from beginning to end:  filled with vindictiveness, invented history, and false accusations. 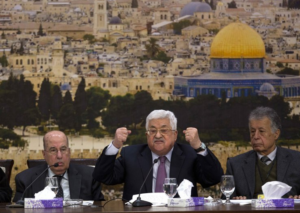 “[Europeans] wanted to bring the Jews here [to the Land of Israel] from Europe in order to protect European interests in the region. They asked The Netherlands, which then had the largest navy in the world, to relocate the Jews…

“We won’t take orders from anyone. We told Trump we will never accept his [peace] plan. His ‘deal of the century’ is the slap in the face of the century, and we will not accept it.”

To Trump: “May God demolish your house.”  (My understanding is that in Arabic this was a curse, though it is not being widely reported this way.)

The only matter of real interest here is how the US will respond.

For public consumption Abbas is saying that, “…there is no Oslo.  Israel ended Oslo.

“We will not accept… [US] mediation after its Jerusalem crime, but we will accept only international mediation in the peace process with a goal to end the occupation…”  (Emphasis added here and above)

Yet credible reports indicate that the PA is keeping quiet channels of communication with the US open.
~~~~~~~~~~
Commented Defense Minister Lieberman on Army Radio this morning:

“This is a speech of the destruction of the house of Abbas, and it signifies a loss of composure, a loss of support from the moderate Arab world and, of course, a renunciation of negotiations.”
~~~~~~~~~~
The Israel-Indian meeting seemed to get off to a sterling beginning yesterday:  Prime Minister Modi surprised Prime Minister Netanyahu by breaking with protocol and going to the airport to greet him personally, which he did most enthusiastically.  See a video of the greeting from Israellycool:

It has happened time and again, and again, that building was begun, or had been done, by Jews on land in Judea and Samaria that was considered cleared, legally clean:  Building done in good faith.

And then, one or more Arabs—supervised or “encouraged” by one of the very left Israeli NGOs, most often Yesh Din—would petition the High Court, claiming that they had some obscure title to the land or part of the land.  And the court would find for the Arabs, if there was even a question.  It has been very painful to watch, and has seemed consistently unjust to many of us.
~~~~~~~~~~
Now we have a court finding of a different order, which brings hope for the future, and which is very important in and of itself.

When the community of Amona was demolished (in a court finding that was itself troublesome), the government promised the residents that a new community would be established for them.  And the very beginning of work was begun on that new community, which the residents named Amichai. 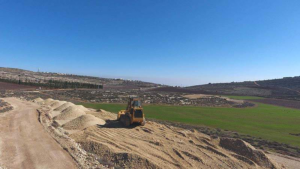 It would be reasonable to assume that after all of the grief over Amona, the government selected an area for this building that was legally clear without a doubt.

But the building had barely begun six months ago before it was stopped:

Yesh Din and the head of the council of the Arab village of Jalud petitioned the High Court, claiming that the residents of Jalud had not been given the opportunity to declare their rights to this land.

In filing this petition however, the former residents of Amona were not given an opportunity to respond.  The Amona residents petitioned the High Court and were promptly added to the petition as respondents.

At the end of last week, the High Court threw out the petition: it had become clear that most of the area designated for Amichai had been declared state land as early as 1981, and was allocated to the Binyamin Regional Council, which attached all of it to the jurisdiction of the community of Shilo.

“There is no concrete claim to land rights at all here. The nearest Palestinian village, Jalud, is two kilometers away as the crow flies.”  He questioned Yesh Din’s status as a petitioner for the villagers. 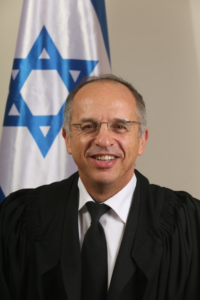 ~~~~~~~~~~
All right!! We have hopes that we will see more rulings like this.  Justice Solberg is one of four justices appointed to the High Court via a revised selection process that hopefully will provide more balance.

Much credit is due Justice Minister Ayelet Shaked (Habayit Hayehudi), both for her work on the revised selection process and her efforts regarding Amichai. 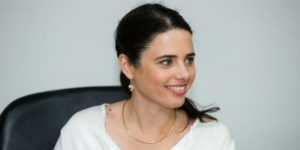