From Israel: Tracking Those Winds

Issam Akel is an American citizen; he has residency papers and lives in eastern Jerusalem.

Two months ago, he was taken into custody by the Palestinian Authority and has been tortured.  It is feared that his life is in danger.  His crime?  Selling – or planning to sell — land in eastern Jerusalem to Jews.

The International Legal Forum, located in Jerusalem, is calling for voices to be raised on Akel’s behalf.

He must be released immediately:  in order to make this happen, it is important to shine a light on his situation. Please put out the word on your Facebook pages, Twitter, letters to the editor, talkbacks and more.

The Forum charges that “the PA’s policy violates the fundamental principles of international law.”

US Ambassador to Israel David Friedman tweeted that:

“Akel’s incarceration is antithetical to the values of the US & to all who advocate the cause of peaceful coexistence. We demand his immediate release.”

The response of Fatah official Osam Al-Qawasme – who calls Friedman “an ambassador of the settlers” is instructive:

“We deplore his statement that Akel’s arrest violated American values. Does building of settlements adhere to American values? We in Fatah will confront all attempts to harm the city of Jerusalem or its sacred places.”

Palestinian Authority law requires that all land sales in eastern Jerusalem be approved.  The PA continues to envision that this portion of united Jerusalem will yet become the capital of a Palestinian state.
~~~~~~~~~~
And then to the rapidly evolving story of Hezbollah in our north (and beyond):  It is an open-ended situation; more is revealed almost daily.

As I proceed with my tracking of the news, I am finding some reporting inconsistencies. I would be surprised if this were not the case: What is reported depends, first, on who is providing information, and then, on how that information is received and interpreted.

What is holding across the board is the fact that the IDF has been aware of the tunnels for some time – precisely how long is unclear. Certainly there was knowledge of them before recent decisions were made regarding whether to move on Hamas.

Apparently the determination to start exposing those tunnels was factored into the decision by the Security Cabinet not to escalate an attack on Hamas at this point – although, while it was a major factor, I do not believe it was the sole factor that played into the decision. (I will return to this in a coming post.)
~~~~~~~~~~
There have been multiple statements – from Chief of Staff Eisenkot and others – regarding the fact that we have the Hezbollah plan for their tunnels. This is not a case of having happened on a couple of them: we know where they all are and will be able to expose them all.

According to information I have to date, there are now three cross-border tunnels that have been exposed.  I wrote last week about the first, which ran into the eastern Galilee.

A second one was uncovered on Thursday; it originated under homes in the southern Lebanese village of Ramyeh, and moved into the western Galilee near the small village of Zarit.

“A senior Israeli official on Thursday said the tunnels discovered inside Israel were large enough to be used by ‘entire battalions’ to enter Israeli territory in order to ‘carry out killing sprees and kidnappings and to capture Israeli towns and villages.’

“Prime Minister Benjamin Netanyahu elaborated, briefing foreign envoys at the northern border: ‘If you look at the Hamas tunnels, they’re very narrow, basically for one person. The Hezbollah tunnels are broad. They enable several people to come at one and also to put motorcycles, I’m pretty sure tractors and so on.’” (Emphasis added)

A third tunnel – alluded to in the above article – was uncovered in the western Galilee on Friday, but, for reasons of security, its precise location has not been revealed.

This tunnel and the first are being systematically destroyed.
~~~~~~~~~~
After the uncovering of the first tunnel, the IDF provided information about it to the Lebanese Army and UNIFIL.  The response was that there has been no solid information provided by Israel – no proof that there really were tunnels. This was not surprising.  For this is how UNIFIL operates: 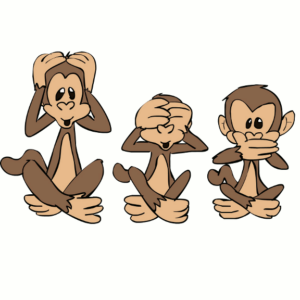 ~~~~~~~~~~
The IDF was not about to invite a repeat of this situation with the second tunnel, and so this time Maj. Gen. Stefano Del Col, commander of UNIFIL, and his delegation were brought to see the tunnel. 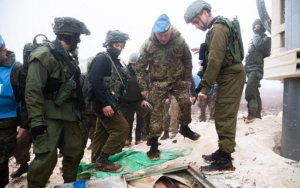 The General could not very well deny the existence of what he was seeing with his own eyes.  UNIFIL, which did not acknowledge involvement of Hezbollah, subsequently put out a statement:

“Based on the site inspection, UNIFIL can confirm the existence of a tunnel at the location.

“UNIFIL is now engaged with the parties to pursue urgent follow-up action. It is very important to determine the full picture of this serious occurrence.”

https://www.timesofisrael.com/un-peacekeepers-confirm-existence-of-tunnel-from-lebanon-into-israel/
~~~~~~~~~~
The IDF then demanded that UNIFIL and the Lebanese army dismantle this tunnel.

My immediate response was one of incredulity: why are they bothering when there is not a snowball’s chance in hell that UNIFIL will comply here?

But that was a response from my gut: it did not take much additional reflection for me to realize that this was a public relations move – a way of publicly holding UNIFIL’s feet to the fire, and setting up a situation in which other demands will be made.  It must be clear, to start with, that UNIFIL, through failure to honor its mandate, has allowed the current situation to evolve.
~~~~~~~~~~
In 2006, at the end of the Second Lebanon War, the UN Security Council unanimously adopted Resolution 1701, which called for an end to all hostilities. Between the Israeli-Lebanese Blue Line border and the Litani River in Lebanon, 12 miles north, there were to be no armed forces other than the Lebanese army.  Hezbollah, which had been decimated during the war, had to withdraw north of the Litani River; Israel had to withdraw behind the Blue Line. That area between the Blue Line and the Litani was to be “free of any armed personnel, assets and weapons other than those of the Government of Lebanon and of UNIFIL [United Nations Interim Forces in Lebanon].” UNIFIL’s mandate was extended; it was to assist the Lebanese army.

We all know how well this worked out.  Hezbollah is fully deployed in southern Lebanon now and has 130,000 rockets stockpiled in that area.  Stories of deliberate failure by UNIFIL to act to fulfill its mandate have been numerous over the years.

None stands out for me more tellingly than the report some years ago by a commander of UNIFIL that patrols were only done during daylight hours in order to secure the safety of the UN troops. 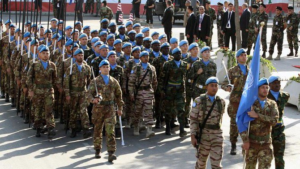 You get one guess as to when rockets were transported over the border from Syria.  While this was going on, UNIFIL was able to report honestly that in their patrols they found no evidence of rocket smuggling.
~~~~~~~~~~
A major part of UNIFIL’s problem has been that it is not empowered to act unilaterally, but only to provide assistance to the Lebanese army.

And herein lies a major weakness in the situation, as described by INSS, the Institute for National Security Studies (emphasis added):

“In practice, Lebanon is a weak state whose government, to the extent that it functioned at all during this period, was being held hostage by Hezbollah, which is part of that same government. The Lebanese army too is Hezbollah’s hostage and sometime partner: Hezbollah is militarily stronger, and politically paralyzes the state’s military. Thus, regarding the military dimension, Resolution 1701 was emptied of any real content even when it was formulated, and dynamics on the ground continued to deny it substance….

“Over the years, many UNIFIL patrols have been attacked by so-called ‘angry citizens’ – usually young men, sometimes armed, many equipped with tactical radio communications. UN soldiers have been bruised and brutalized and have had much equipment ‘confiscated,’ including cameras, navigation, electronic and communication devices. Hezbollah personnel have routinely been identified on regular patrols along the Blue Line barrier, while Hezbollah’s military areas have been practically declared off-limits on the pretext of being ‘private.’

“Under the increased pressure, UNIFIL forces gradually scaled back their determination and desire for effective monitoring…”

http://www.inss.org.il/publication/unifil-ii-ten-years-on-strong-force-weak-mandate/
~~~~~~~~~~
Israel is not going to repair this situation by leveling charges, no matter how appropriately. UNIFIL and the Lebanese army are not about to assume responsibility for Hezbollah’s actions.

But the Israeli effort is laudable insofar as it attempts to call attention to the situation.  A shift in the diplomatic stance of the UN and relevant nations is the only hope, however slight, of avoiding open conflict. For the tunnels constitute one aspect of a critical situation, with the rockets and missiles being the other.
~~~~~~~~~~
Yesterday, under cover of stormy weather, three suspected terrorists approached the border of Israel from Lebanon.  The IDF Spokesperson’s Office reported that IDF soldiers “shot toward the figures according to orders to open fire. The three escaped…”

Additionally, a report surfaced indicating that Israel issued a warning to Lebanon that Israel would attack Hezbollah on Lebanese territory if the group does not halt its building of precision-guided missiles, which are being altered with Iranian support. The US and France were called upon to issue the message.

“Hezbollah’s role in Syria has ended. The organization is now re-engaging in its regular role: preparing for a war against Israel…

If there are still any doubts left regarding Hezbollah’s tunnel excavation ability, an October 2018 report from the Orient revealed that weapons brought on civilian flights from Tehran to Beirut and Damascus are being stored in underground tunnels between Syria and Lebanon (in Al-Qusayr, which is in the Bekaa Valley)—tunnels that were dug by Hezbollah during the civil war in Syria.”

https://www.ynetnews.com/articles/0,7340,L-5421172,00.html
~~~~~~~~~~
I was about to complete this posting on an upbeat note, when news came in of a terror attack outside of Ofra, in the Binyamin area north of Jerusalem. Six people were wounded in a drive-by shooting at a bus stop on Route 60.

A pregnant woman was critically injured. I have no name.

Two are in moderate condition and three, including two 16-year old girls, are in light condition.

And now an update:

Doctors successfully delivered the baby being carried by the woman who was critically injured.

“The baby, who was delivered in the 30th week of the pregnancy, was immediately transferred to the ward for premature babies at Jerusalem’s Shaare Zedek Medical Center… and was said to be in ’good’ condition.

“The woman was undergoing surgery late Sunday and was ‘fighting for her life,’ the hospital said.”

Pray, pray for her.

Each time I report an attack, I pray it will be the last.  Someday, this will be so.
~~~~~~~~~~
Tonight we light the last candle of Chanukah.  The eighth day should bring brachot.  Especially when there is news such as I have just reported, we look for the brachot, the blessings.

Here I do something I’ve not done before:  The picture below is my very own Chanukiah, as I lit it this evening. 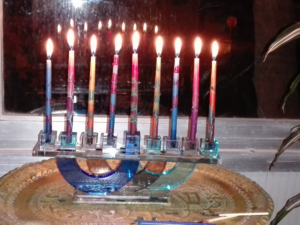 Recited after the candles are lit:

“These lights we light, for the miracles and the wonders…”