Pesach—which was a delight for me, as I hope for all—is over.  I’m back at my computer, and back to business.

Just as I did a week ago, I turn again to report on what happened at our border with Gaza on Friday, a day that Hamas called “Friday of the Tires.”  They had warned that they would bring massive quantities of tires close to the border and set them on fire.  The idea was that the billowing black smoke would block the vision of the Israeli sharpshooters and other IDF personnel, so that the Palestinian Arabs would be able to damage or break through the fence – without getting shot.

They also said that, building on last week’s efforts, they were going to bring out 100,000 people this time, compared to the 30,000 of the week before.
~~~~~~~~~~
Sure enough, right after Friday prayers, they brought out the tires, and set them on fire.  And, indeed, there was billowing black smoke. 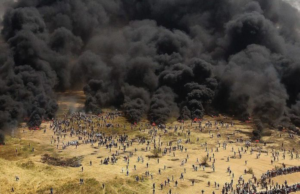 But it was a colossally stupid move.  Dr. Ahmad Khilas, an environmental expert from Gaza, posted a warning last week regarding the dangers of what was planned (emphasis added):

“Burning tires produce smoke and chemical toxins.  Direct inhalation of the fumes or contact with the eyes or skin will immediately impact health, in addition to its disastrous effects on other organisms, agricultural land, the air and groundwater.

“The hot air will rapidly rise, with currents lifting all of the toxins high into the sky. When the air temperature drops, however, the toxins will rain down on agricultural crops.

“By the amount of tires I have seen, I believe an enormous cloud of noxious vapors will be created, and if winds carry that cloud towards cities—it will lead to disaster.”

This is so typical.  Instead of taking care of themselves, they dangerously undercut themselves in their effort to damage us.  And their children, damaged by this smoke? Less than no concern for them.
~~~~~~~~~~
As it turned out, these tactics did not allow them to achieve their goals.

The IDF brought out water cannons to put out fires and giant fans to disperse the smoke. 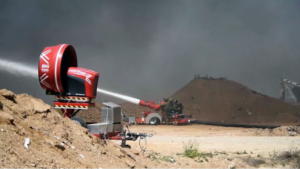 Additionally, as I understand it, the wind was blowing westward for a major part of the day, moving the smoke into Gaza and away from the fence.
~~~~~~~~~~
There were attempts to damage or break through the fence, but the smoke did not screen them and in all instances they were stopped by the IDF. There were unsuccessful efforts, as well, to toss Molotov cocktails and other explosive devices at the IDF.   Catapults were even prepared to launch large concrete blocks over the fence, but they did no damage.

At the end of the day, IDF spokesman Ronen Manelis said:

“If yesterday I said it was a gimmick, then today it turned out to be an antic.  The tires did not create the effect that Hamas sought…They mainly harmed those breathing the smoke on the other side [of the fence].”

Manelis had described the antics this way:

A Gazan official, cited by Ynet, said, “The number of protesters is extremely low compared to expectations and to the protester turnout last week. There’s no flood of people coming in from the strip.” (Emphasis added)

The IDF estimated the presence of 20,000 people.  Considering that 30,000 had come out last week, and 100,000 were predicted for this time, it was a meager response. Future weeks, which are planned, are likely to see an increasingly diminished response.

Think about the millions of dollars Hams spent in preparing camp sites for all of the people who were expected to come.
~~~~~~~~~~
It seems that the Hamas policy of paying people to come to the border was not a substantial motivator either:

If they were killed during the protests, the family was to receive $3000.

Hamas spokesman Hazim Qassim provided confirmation on Thursday, on an official Hamas website. He said that this was part of Hamas’s “social and national responsibility to strengthen the steadfastness of our people in its struggle for return, freedom and breaking the siege.”

“All the demonstrators near the security fence in the Gaza Strip receive salaries from Hamas.”
~~~~~~~~~~
This past Friday, nine Palestinian Arabs were killed and some 150 or more wounded (Gaza Health Ministry figures are not reliable) as the IDF responded to violence and attempts to infiltrate the fence.

One of the dead was Palestinian Arab photo-journalist Yasser Murtaja.  Much was made of the fact that Israel targets “innocent” journalists.

Lieberman subsequently charged that Murtaja had been operating a drone.

“I don’t know who he was, cameraman or no camera man – anyone operating drones above the IDF soldiers must know he is putting himself at risk.”

Israel Radio, cited by the JPost, reported that an unnamed source in Gaza had confirmed that Murtaja had been operating a camera drone.

Murtaja had been wearing a vest identifying him as “Press” [which does not mean he really was press]. But, in any event, as Lieberman noted, “Hamas has used both journalists and ambulances to carry out terror attacks dozens of times.”

Use of journalists and ambulances provides benefits for the terrorists in two ways: They use these methods as a screen, hoping it will make their efforts less obvious.  But if they are caught, then they scream that the IDF has committed an offense: How dare they target a journalist?  How dare the IDF interfere with the humanitarian work of an ambulance!
~~~~~~~~~~
In spite of the massive evidence to the contrary, Hamas continues to insist that their people are innocents who are protesting peacefully. And there are those who are willing to believe it.

Col. Richard Kemp, former commander of British forces in Afghanistan, came to the Gaza border on Friday to see the situation himself.  He reported that viewing the clashes close up reveals the reality:

“This is a deliberate and specific intent to terrorist organizations to penetrate the State of Israel and kill civilians, and the IDF has no option except to use lethal force to stop such a dangerous threat.” 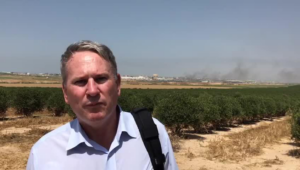 ~~~~~~~~~~
There is also incontrovertible visual evidence of what the Palestinian Arabs in Gaza are about.  No evidence more stark than the flying of a Palestinian flag with a swastika.

Scroll down here for the even more effective Youtube video of this flag waving in the breeze:

https://unitedwithisrael.org/watch-gaza-human-rights-protesters-fly-palestinian-flags-with-swastikas
~~~~~~~~~~
The IDF has warned at this point that we will not contend week after week with this sort of situation at the border of Gaza.  If it persists, as Hamas says it will, then we will be taking stronger action.
~~~~~~~~~~
The PLO, represented in the UN by Riyad Mansour, is attempting to seek international condemnation of Israel in one forum or another.  For the second week in a row, the US has vetoed a call in the Security Council for an independent inquiry into the death of Palestinian Arabs at the Gaza border.

Mansour called the veto “very irresponsible,” because it gave Israel “the green light to continue with their onslaught against the civilian population” in Gaza.

“We will not give up,” Mansour said. “We will continue knocking on doors.”

This is simply something we must contend with, in spite of the outrageous hypocrisy.
~~~~~~~~~~
In this context, the statement last Thursday of US envoy Jason Greenblatt regarding this situation was a breath of fresh air:

Protesters, he cautioned, “should remain outside the 500-meter buffer zone [set by the IDF]; and should not approach the border fence in any way or any location.

“We condemn leaders and protesters who call for violence or who send protesters — including children — to the fence, knowing that they may be injured or killed.” (Emphasis added)
~~~~~~~~~~
I will likely have more to say about the international reaction to this situation in my next posting.

But here I want to switch gears a bit and call attention to the fact that Assad has bombed the city of Douma, east of Damascus.  Rebels report that poison gas was used.  Some 150 people are reported dead and a thousand civilians are suffering from suffocation due to the inhalation of the poisons. 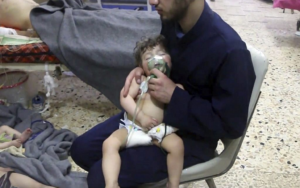 I speak of outrageous hypocrisy, but that hardly begins to describe the indifference of the international community, or, at least, some significant segments of that community. Much more important to be concerned with – and profess horror about – the killing at the Gaza border of nine terrorists.

It is thus with pride that I report on the comments of Chief Rabbi Yitzhak Yosef, with regard to the situation in Gaza:

“I have said before and I repeat, in Syria there is a brutal genocide of both women and children with weapons of mass destruction.

“There is a moral obligation not to remain silent and to try to stop the massacre.

“As Jews, who have experienced national extermination, whose Torah is a light unto the nations, our moral duty is to try to prevent the massacre…” 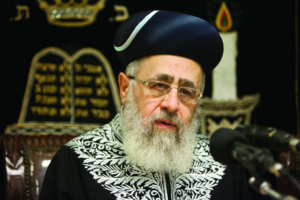 I do not know what we will do, but I do know that a call to save others as a moral responsibility is a tremendous rarity in this world.
~~~~~~~~~~
Much happening that I want to write about. But once again, I believe it is important that this information go out without delay.