From Israel: Through the Prism of Victory

“Through the Prism of Victory”

It is not sufficient that I wrote in my last posting about the Knesset Israel Victory Caucus.  What the Israel Victory Project does, in speaking of the need for Israel to win, is promote a mindset.  It’s important to draw upon it whenever possible.

In that last posting, I wrote about interactions with the Palestinian Arabs that fail to deliver the message that they have lost.  I cited as one example the return of Trump envoy Jason Greenblatt to this area to further “peace.’

Undoubtedly, I observed, Greenblatt would be visiting Ramallah, and speaking with Abbas, in spite of the fact that Abbas had refused to stop paying salaries to imprisoned terrorists when Trump had emphasized the need for him to do so.

Well, matters did not turn out precisely as I had predicted.  But this was not Greenblatt’s doing.

The last time Jason Greenblatt was here, in June, Trump had wanted US Ambassador to Israel David Friedman to join the meeting with Abbas.  But, as Abbas objected, the Americans let it pass.

Not this time. Now Trump insisted that Friedman participate in talks Greenblatt was going to have with Abbas. 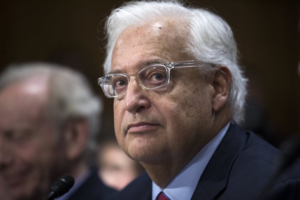 Under any circumstances, David Friedman – staunchly opposed to “two-states” and a supporter of the Shomron community of Beit El – is someone who would not be viewed benevolently by the leaders of the PA.

But as it is, he also represents the US in Israel, and it is apparently not the norm – not “protocol” – for the person who holds this position to participate in meetings between US envoys and PA leaders.

The fact that Trump insisted on Friedman’s participation gave me a brief rush of hope.  My immediate thought was that Trump has Abbas’s number.

Now I can only say, maybe…  While Trump’s insistence indeed does seem to take Abbas down a notch, and shift the dynamic a bit, it’s difficult to know what his real motivation was.

According to a White House official:

“The administration believes that in order to give everyone the best chance to reach an ultimate deal, it is critical to have negotiators who are close with the president.”

Sounds like a bunch of double-talk to me.  Jason Greenblatt (his long-time lawyer) and Jared Kushner (his son-in-law) are not “close with the president”? What does the presence of Friedman (another long time lawyer) add to this equation?

At any rate, Abbas refused to meet the US negotiators in Ramallah and instead came to western Jerusalem (specifically, the King David Hotel).  Western Jerusalem, because that is where “the purview” of Friedman’s work is.  They did not want even a hint of a suggestion that the scope of official authority of the ambassador to Israel extended to Ramallah (i.e., that Ramallah was in Israel). They spoke about not wanting to “compromise their diplomatic independence.”

Others who attended the meeting included Saeb Erekat, secretary-general of the PLO, and US Consul-General in Jerusalem Donald Blome.

The latter requires a bit of explanation.  The consulate in Jerusalem to which Blome is attached serves the Palestinian Authority as a de facto embassy.  It answers to the State Department, and not to the US Embassy in Tel Aviv, which would be the norm for a consulate.  Those who work in that consulate are solidly oriented towards the Palestinian Arabs. In the picture below, released by the consulate, Blome was visiting a PA village. 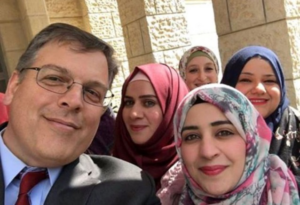 His presence at the meeting presumably added balance to the presence of Friedman.

After the meeting, a White House official reported that: “The two sides ‘had an open, cordial, and frank discussion on many topics related to peace negotiations.’”

According to Erekat, speaking to the Voice of Palestine, “We discussed the issue [settlements] for a long time and…they [the Americans] said they told Netanyahu that restricting settlement construction is necessary.”

Arab sources – notably Al Hayat in London – are saying Trump is about to announce the resumption of “peace talks,” and that the Israelis agreed to slow down building during their duration.

Just two months ago, David Friedman, newly arrived on the job, said that the US was not asking Israel to freeze settlement construction.

And now Netanyahu is denying that there has been any agreement to slow down.

My take: It seems very likely indeed that a request for a building slowdown was conveyed to Netanyahu.  (I’m noting that “slow down” and “freeze” are being used interchangeably in the news, but they are not the same.)   I don’t know that there was any formal “agreement,” however, which gives our prime minister deniability.

We know that Netanyahu has a great desire to work with the president, whom he views as a friend.

Here is an instance of needing to assess if what is happening is what is best for Israel.

Those of us who are watching this situation observe building stops and starts, and announcements that are encouraging but that don’t always lead to fulfillment on the ground.  That’s what matters in the end: not words, but what happens on the ground.

Is there a total freeze? Absolutely not.  But are matters where we would like to see them?  No, again.

Apparently, the Trump administration has not yet firmed up its policy on “settlements.”

On Wednesday, Greenblatt and Friedman met with Prime Minister Netanyahu. 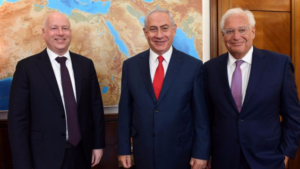 For this meeting, Israel’s Ambassador to the US Ron Dermer was also present.

Very little is being released about that meeting, which I am certain was quite cordial.

Still the word from the White House is that an agreement is high priority for Trump.  That he will fail is a given, but it bears watching to see how this process will affect us in the meantime.

Today a press conference was held at the King David Hotel to announce a deal between Israel and the PA that Greenblatt facilitated.

This had to do with finalizing implementation of the Red Sea-Dead Sea Canal plan.  This is meant to address the alarming rate of shrinkage of the Dead Sea, which is in crisis because insufficient water is flowing into it.  The canal would bring water from the Red Sea. (There are critics of this plan who are concerned that the different chemical composition of the two seas would end up being destructive to the unique nature of the Dead Sea.) 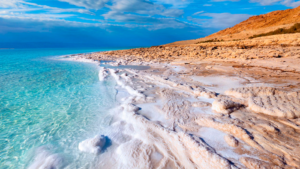 Included in the deal was agreement that 33 million cubic meters of water annually would be sold to the Palestinian Authority to relieve the water situation there.  That sale would begin before completion of the canal.

I started to write this up, reporting it as it appeared in various sources. But even as I wrote, I was bewildered: I felt sure that this plan, which has been under discussion for some time, included the active involvement of Jordan.  But Jordan was not mentioned. The press conference featured Greenblatt, Israel’s Regional Cooperation Minister Tzachi Hanegbi, and Mazen Ghoneim, head of the Palestinian Water Authority.

Greenblatt’s message was that he hoped this was a “harbinger of good things to come” with representatives of Israel and the Palestinian Authority sitting down together with good will, encouraged by a facilitator such as himself. (See, peace is possible, wink wink.)

Then I found reference to this in The Jewish Press, where I learned, indeed, that Jordan was involved – in fact the canal is supposed to run from the Jordanian city of Aqaba across Jordanian territory to the Dead Sea.

Way before Greenblatt was involved, it had been “designed to provide drinking water to Jordan, Israel and the PA, as well as provide sea water to raise the Dead Sea’s receding water level, and generate hydroelectricity to support the energy needs of the project itself.

“Greenblatt told a press conference in Jerusalem that the ‘US-mediated deal’ will give the ‘parched Palestinian territories’ a whopping 32 million cubic meters of water per year, which Israel would provide at a reduced rate…

“But the fact is that well before Donald Trump even descended the Trump Tower escalator to announce his run for the presidency, Israel was already working on those plans, thank you very much.” (Emphasis added)

You can draw your own conclusions.

Today, as well, Greenblatt joined representatives from the EU, the UN and Russia at a meeting of the Mideast Quartet.  What joy, to have these meddlers come together to provide input into what goes on here.

I will say, however, that the observation of UN envoy Nickolay Mladenov was sensible: “It is not helpful right now to jump into final-status issues and arrangements.”  Indeed.

It was good news that the Security Cabinet voted to temporarily freeze a decision on expanding the Palestinian Arab city of Kalkilya into Area C.  I’ll come back to this when the issue is re-visited.

Education Minister Naftali Bennett says this would be a reward for terrorism, while Defense Minister, applying his “carrot and stick” policy, argues that this would prevent terrorism by providing the residents of that city with better conditions.  I am not convinced.

Closing on an upbeat note:

According to Travel and Leisure, Ben Gurion Airport is the 8th best airport in the world.

And the airport is busier than ever:

“Israel has experienced its best half-year ever in the history of the country’s tourism industry, breaking incoming traveler records month after month thus far in 2017.

“During the first six months of the year, 1.74 million tourists entered the country, up 26% from the first half of last year…”