From Israel: “The World Has Gone Bonkers!!”

My head is spinning, my friends, and it is likely that yours is as well. There is so much to address — yet we need to do triage, focusing on what is most important.

In my last posting I wrote about the deplorable and frightening situation in the US and anticipated I would focus on Israel next.  But, as crazy as things are here, they are far less worrisome and distressful than what’s happening in America. And so, I feel compelled to return to matters there first.

Massachusetts Attorney General Maura Healey – an official charged with upholding the law! – gave a speech June 2nd, during which she said (emphasis added):

“Yes, America is burning, but that’s how forests grow.” She later tweeted that “we must seize the opportunity we have right now to build anew in ways that rid us of the institutionalized racism that’s led to America burning today.” 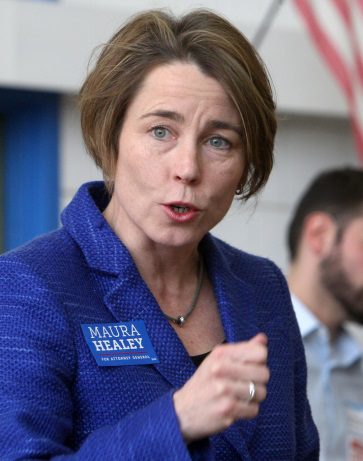 This is how frightening the situation has become.  Not only because she justified wanton and illegal destruction of property, but also because she believes that racism is institutionalized in America and is the “cause” of the arson.  I assume she chose to ignore documentation of carefully planned radical incitement of mobs because it didn’t fit her worldview.

Clearly, not all elected officials see it this way: she belongs to a group, including those who advocate defunding police, who are far-left progressives and (even if white themselves) point a finger at white America.

This has become their theme: white Americans – the recipients of “white privilege” – are racist; black Americans have been victims of this repressive social system for too long and demand redress.

Don’t take my word for it: there are many black Americans who agree.

Star Parker is the founder and president of CURE, the Center for Urban Renewal and Education, a Washington D.C. based Public Policy Institute that fights poverty and restores dignity through messages of faith, freedom and personal responsibility.  (My emphasis) 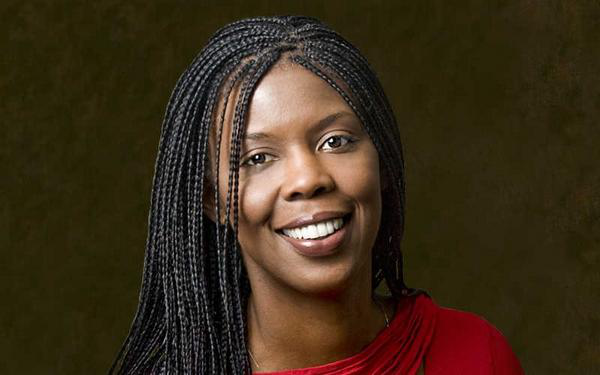 Parker, who is unabashedly conservative in her perspective, embraces traditional values. She believes welfare switches the mindset of recipients from “How do I take care of myself,” to “What do I have to do to stay on the [government] plantation.”

She has just begun a new video series for CURE, and the very first one touches on “The Killing of George Floyd.”  https://cureamerica.news/

The entire video is close to an hour long, and includes a panel discussion.  I urge you to listen, at least, to the first four minutes for some wise words and an important perspective.

“I don’t agree,” she asserts, “I don’t agree that our nation is racist.  That mantra is the poison that entrenches resentment and division among us…The left has systematically reduced the fundamentals of citizenship to race.” (Emphasis added)

One of the things that mantra of racism does is foster a sense of victimhood in black Americans. It’s all about what has been “done” to them by a white America that does not allow them equal opportunity.  Star Parker’s emphasis on personal responsibility is all important in shifting black self-perception and providing a sense of empowerment.

“If black Americans are victims of anything,” Parker observes, “it is that they live in a country that has become a wasteland of moral relativism.”

Political activist and conservative commentator Candace Owens testified at a recent House Judiciary hearing, where she declared that: “I will not pretend to be a victim in this country. I know this makes many people on the left uncomfortable.” 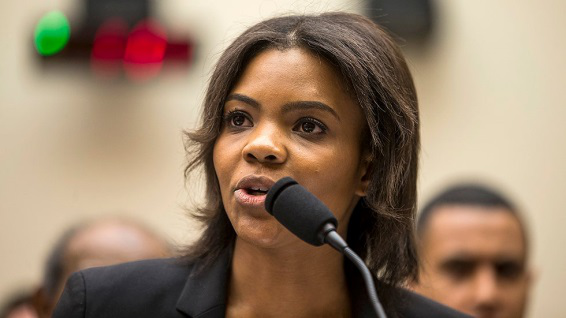 Owens is concerned that the Democratic focus on racism – which she calls a hoax – distracts from the real issues that impact black America, such as the fact that 75% of black boys in California cannot read, and that there is enormous black-on-black violence with 90.1% of homicides of blacks in America committed by other blacks.

Yet progressive white Americans see it as their responsibility to beat their chests and apologize to black people, indeed to kneel before black people on the street or even to kiss their shoes.  I alluded to this last time: It’s a pathetic and unsettling spectacle.

Sadly, this spectacle made its way to the House of Representatives earlier this week, when Speaker Nancy Pelosi and a cohort of progressive Democratic Congresspersons went down on one knee for a period of eight minutes and 46 seconds – the length of time that police officer Derek Chauvin had his knee on George Floyd’s neck before he died. 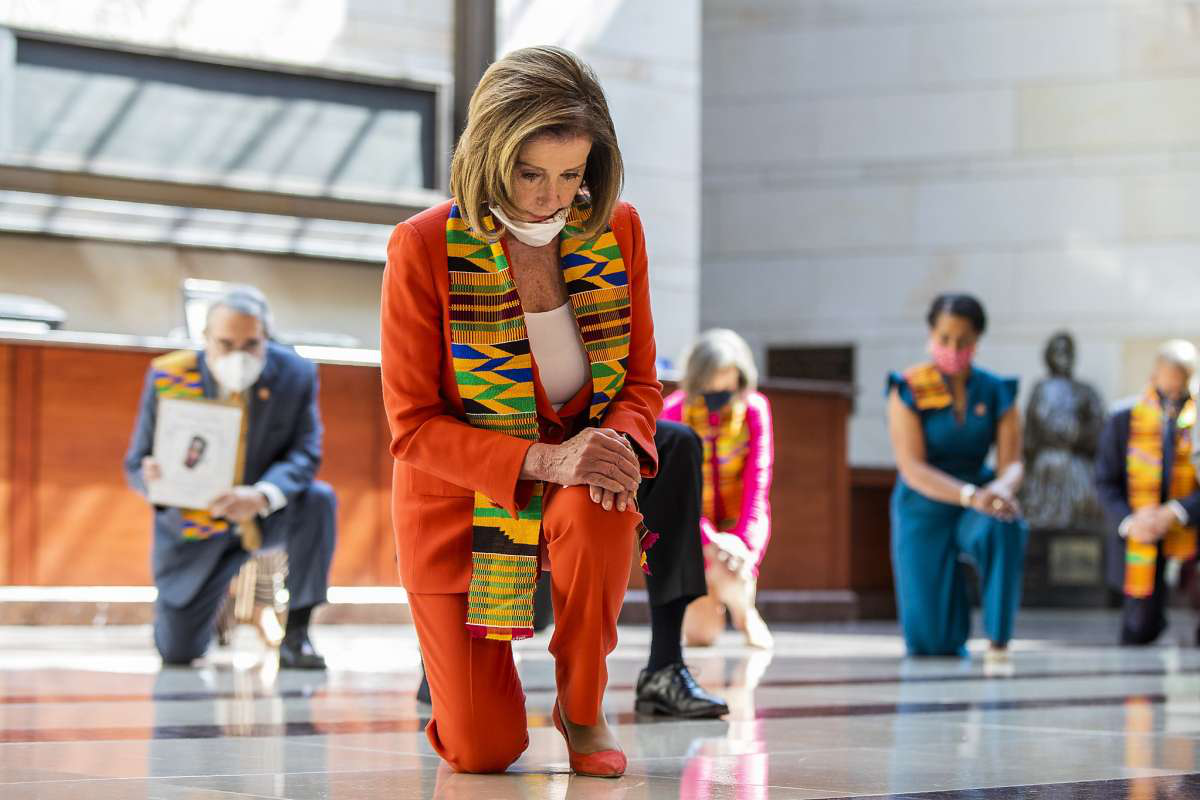 But Pelosi and her associates did not content themselves merely with kneeling: they wore Kente cloth draped across their shoulders.  Kente cloth is an indigenous textile of Ghana, in the area that had been the Ashante Kingdom. It is intricately woven of bright colored threads of silk and cotton and the various patterns have deep meaning for the people of that region.

The Congresspersons’ donning of these cloths was not well received: they have been accused of pandering, cultural appropriation, shameless virtue signaling, ridiculous tokenism, and more.

And I daresay that these various accusations are on the mark. This is what members of the House have come to, in an effort to achieve political correctness.

If Pelosi and company were serious persons feeling genuine concern for the frustrations and anger of black people in America, they might have stood at a press conference with dignity, expressed horror at what was done to George Floyd, decried all violence, and called for fair and respectful treatment for all Americans.

They might then have pledged themselves to work to improve the situation for black Americans. There is sooo much to be done with regard to welfare regulations, inner city education and a good deal more. But that would be a real stretch as it would have meant hard work and dedication. They are not remotely up to it.

It’s much easier to adopt the mantra of racism.  A loss not just for black Americans, but all America.

I mention the need for fair treatment for all Americans above for a specific reason:  The riots have unleashed a spate of anti-Semitic attacks on synagogues, and anti-Semitic accusations against Jews and Israel as the perpetrator of violence against blacks.

In an article written less than a week ago that I cited previously, Caroline Glick speaks about this (emphasis added):

“On the burning streets of America today, leftist Jew-hatred is on clear display.

“…synagogues have been vandalized in New York and Los Angeles. According to Yeshiva World News, 75% of Jewish-owned stores in an Orthodox enclave of Beverly Hills were looted last weekend. Graffiti in Los Angeles made clear that the businesses and neighborhoods were targeted deliberately because they are Jewish. 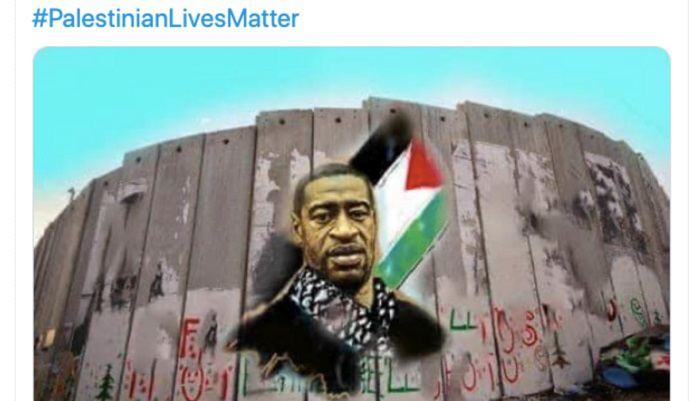 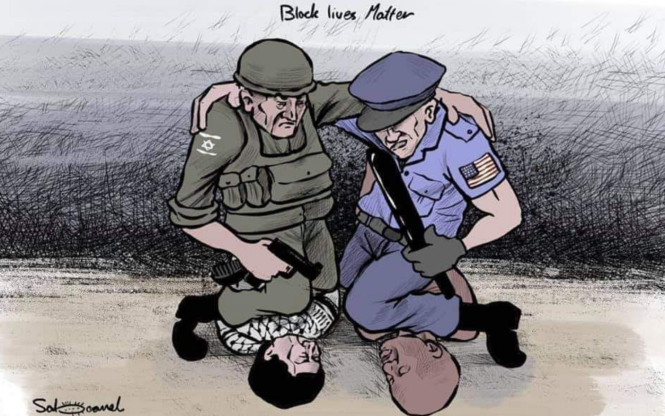 In fact, there have been charges that the IDF trained Derek Chauvin and other US police officers in the technique for placing a knee on the neck of a suspect. In point of fact, there are US police groups that have received training in Israel in such matters as anti-terrorism.  Now it became necessary for a representative of the IDF to make a statement regarding the fact that the IDF utilizes no such technique.

What we see then is that the demonstrations against “racism” are distorted in their message: racism is only to be combatted when it involves actions by white people on blacks.

Certainly representatives of the US government should speak out against anti-Semitic and anti-Israel PR and violence associated with the current social unrest.  But doing so means criticizing some of the blacks involved in demonstrations – and it is not politically correct to do so.

Even worse, many American Jews are progressive and also hesitate to speak out.  Said Glick:

I was going to cite one more point that Candace Owens made recently.  But what she did, in making her point, was to refer to Shelby Steele. An author and Senior Fellow at the Hoover Institute, he specializes in race relations and was praised by President George W. Bush for his “learned examinations of race relations and cultural issues,” when he was presented with the National Humanities Medal. 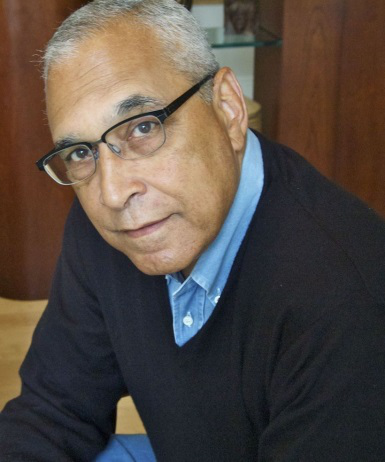 And when I searched his opinions, I decided Steele’s voice was an important one that should be heard (emphasis added):

The protests, says Steele, are about victimhood and power.

“And in order to have — to pursue power as they do, you have to have victims. And my God, George Floyd is the archetypal victim and the whole incident, his murder is sort of a metaphor for the Civil Rights agenda and the grievance industry agenda.

“Here is somebody — utter complete, innocent — tortured to death. Well, wow. The excitement that that triggers on the left in America. It validates their claims that America is a wretched country that they must get recourse for what for what goes on and so forth.

“So it feeds this old model of operation that we’ve developed that America is guilty of racism, guilty of the sin and has been for four centuries, and minorities are victims who are entitled.

“And so when people start to talk about systemic racism built into the system, what they’re really doing is expanding the territory of entitlement.

“Well, that’s a corruption. And I know it’s a corruption because the truth of the matter is, blacks have never been less oppressed than they are to date. Opportunity is around every corner, and in all of this, no one ever stops to say, well, you’re unhappy about where minorities are at in American life and blacks continue to be at the bottom of most socioeconomic measures. You’re unhappy about that.

“You are going to go have a fit in a tantrum and demonstrate and so forth, and yet you’re not — you’re not doing — are you teaching your child to read? Are you making sure that the school down the street actually educates your child? Are you becoming educated and following a dream in life and making things happen for yourself?

“Or are you saying I’m a victim and I’m old and the entitlement is inadequate and I need to be given more; and after all, you know, you whites that racism has been here for four centuries and slavery and so forth, and so it’s time for you to give to me.

Owens point, in a nutshell:  George Floyd was a criminal with a long history of crime, including violent crime.  He absolutely did not deserve to die as he did and his murderer must be punished.  But there is something amiss when he is turned into a hero.  Black culture is broken when it makes martyrs of black criminals, catering to the lowest common denominator.

She didn’t say this, but I will add that the message this sends to black youth is destructive. This is not going to encourage them to strive for the best.

Coming after Shabbat: focus on the craziness here in Israel, with prospects for application of sovereignty, etc.