From Israel: “The Ultimate Balancing Act”

The world of politics: It would be wrong to say that there is never clarity of purpose inspired by high ideals. But it is rare.

Much of the time there are shifting scenarios, and complex, conflicting motivating factors at play. Rivalries, certainly.  We find pretense (allegedly, for good reason). And sometimes – this will surprise no one – out-and-out duplicity. 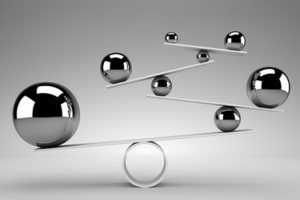 All of this occurs to me as I begin to write about matters that took place last week, and others – of considerable import – facing us later this week.  So many players, so many concerns. So much that exists beneath the surface.

There is an old saying, that “You can’t ride two horses with one behind.” But that is precisely what some politicians/leaders in the public eye attempt to do.

When Britain’s Prince Charles spoke at Yad Vashem, I indicated that his talk was surprisingly good. He referred to his paternal grandmother Princess Alice of Greece, who is designated as a “Righteous Gentile” because she hid a Jewish family during WWII.  This was a source of immense pride for him, he said.  After he spoke, he went to visit her grave, in the Russian Orthodox Church on the Mount of Olives, in eastern Jerusalem.

And then, then Charles went to Bethlehem, where he met with Mahmud Abbas. “It breaks my heart,” he said, “to see so much suffering…No one arriving in Bethlehem today could miss the signs of continued hardship, and the situation you face.” 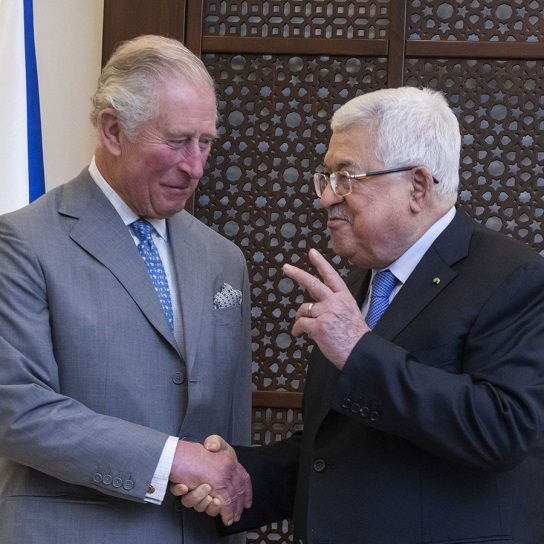 Britain’s Sky News TV, reporting on this, said Charles’s statement constituted “the biggest show of support that a member of the Royal family ever has [expressed] for the Palestinians.”

Words, we are reminded again, are cheap. Until we see concrete action, we will not be able to determine if there will be lasting value to those words delivered at Yad Vashem.

Putin—as sly, and poker-faced, a politician as you will find anywhere—also went to visit Abbas in Bethlehem after the Forum. 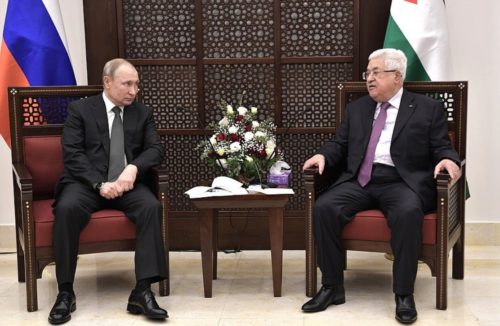 But his motivation was different: he was promoting Russia.

At the heart of Putin’s actions was a desire to make Russia central to events in the Middle East. This is in part a matter of competing with the US; a main topic of conversation was the upcoming “Deal of the Century.”  It was Abbas who did the gushing.

A great deal that Putin did during his visit to Israel for the Forum was motivated by that eagerness to burnish the image of Russia. Where WWII is concerned, there is a heated historical disagreement between Russia and Poland as to who ignited the war and who was critical to bringing it to a halt.

Melanie Phillips has done an excellent job of describing this complex situation:

Israel – which has not had positive relations with Poland for some time now – opted to take Russia’s side.

The request of Polish President Andrzej Duda that he be allowed to speak during at the ceremonies at Yad Vashem was rejected, as only those countries that participated in defeating the Nazis, including Russia, were going to speak (with the addition of Germany). This incensed Duda, who then declined to attend at all.

Of great significance to Putin was a major ceremony held a day before the Forum event, dedicating a memorial in Jerusalem’s Sacher Park to the hundreds of thousands who died in the 900 day siege of Leningrad (now St. Petersburg).

Prime Minister Binyamin Netanyahu, President Ruby Rivlin, and Jerusalem Mayor Moshe Lion all attended; Netanyahu said, “We must not even for a moment blur the sacrifice and contribution of the former Soviet Union in overcoming the Nazi monster and saving the world from tragedy.”

Okay. Whatever else we say about Russia, the fact remains that the Nazis were defeated in some significant part because of Hitler’s turn eastward to Russia, with Russians suffering greatly in the ensuing battles.

There are essentially two reasons why Israel stood with Russia in this debate, and, indeed, courted Putin.

The first is of considerable strategic importance: Putin must continue to look the other way as Israel attacks Iranian installations in Syria.  More than passively looking away, he must continue to work with Israel on communication that is designed to avoid accidental attack by Israel of Russian personnel or equipment.

The importance of this pragmatic consideration trumps a great deal.

But there is another reason, as well: Her name is Na’ama Issachar.

An American-Israeli back-packer, she was travelling from India back to Israel, with a stopover in Moscow.  There, she was arrested when authorities claim they had found marijuana in her suitcase.  She said she had no marijuana. She was subsequently tried and sentenced to 7.5 years in prison, a highly excessive sentence considering she was not planning on entering Russia, and that the amount found (if indeed she was carrying it) was a modest 9.5 grams.

The Russians were after something and there has been much attention given to this situation here in Israel.  Netanyahu said he would do all he could to secure her release; her mother, Yaffa, who has exhibited fierce determination and dignity, travelled to Russia to see her daughter; an appeal was rejected.

What Putin promised, finally, was that when he came here he would be open to discussing the issue.  And he did: on Thursday he met first with Netanyahu, and then with Yaffa Issachar, as well, at the Prime Minister’s Residence. He made a very positive impression upon Yaffa, who found him to be warm and charming. “It’s clear that Na’ama comes from a good family,” he said, reportedly promising Yaffa, “I will bring your girl home.” 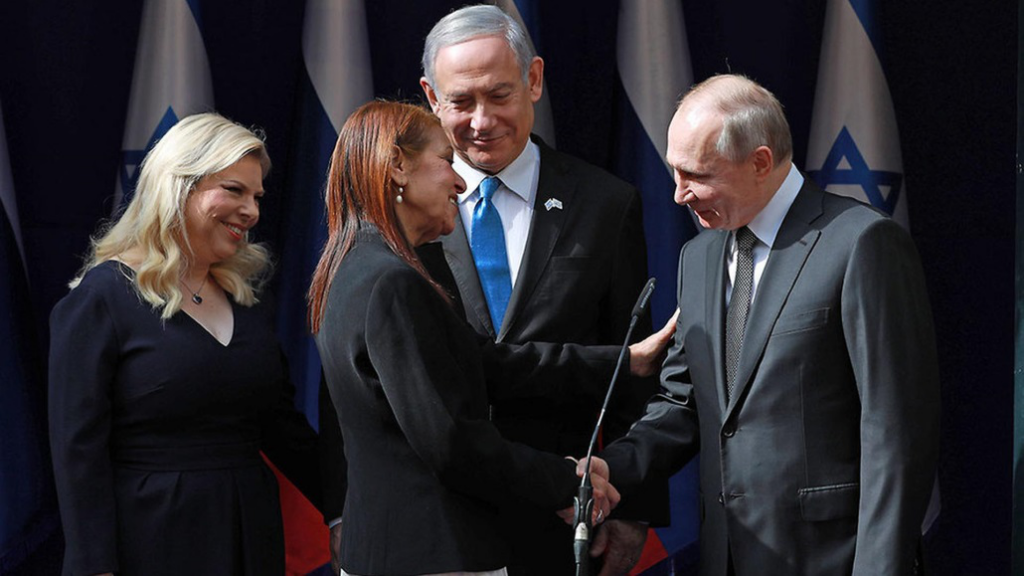 Na’ama at this point has formally submit her request for pardon, but this story is not yet over: the Russians have a price for releasing Na’ama – it includes turning over of some property in the Old City. Details on this will follow as issues are resolved.

I would note here that, while I do not for a moment question the prime minister’s genuine desire, out of humanitarian concerns, to secure the release of Na’ama, we must remember that we are just weeks away from an election: It is imperative, from his perspective, that he demonstrate strength and a solid relationship with Putin that can make a difference in a crisis. We do not know yet precisely what went on during the meeting Netanyahu had with Putin before Yaffa joined them.

There is at least one other person who had more than one motive in coming to Israel to attend the Forum event, and that is Vice President Mike Pence.

Not for a moment do I doubt the sincerity of his words in his speech, which I have already highly praised.  But he was also charged with inviting Netanyahu to Washington, to discuss the “Deal of the Century” with President Trump.  The president has said that he will be releasing his “peace plan” before Tuesday, although the precise timing—before or after his meeting with Netanyahu—is not clear.

Netanyahu requested that Benny Gantz also be invited.  Gantz accepted, hedged that acceptance, and then said he would go, but will have a meeting with Trump separate from the president’s meeting with Netanyahu.

I had expected to examine some of the recent exchanges between Netanyahu and Gantz with regard to applying sovereignty over the Jordan Valley and more.  There has been a great deal of confusion with regard to positions taken, as each jockeyed for the most effective stance, and Trump then asked Netanyahu to hold off.

Gantz is in a bind, because his Blue & White party has left-leaning factions but he hopes to draw right wing voters away from Likud and Yisrael Beitenu, as well.  This is likely an impossible task, but certainly one that makes it difficult for him to project a clear position.

Gantz had been opposed to release of the “peace plan” before the election as he felt it would represent political interference. But once Trump announced he would be releasing it, Gantz was obliged to reverse his position and assume a positive posture.

Netanyahu, as we might expect, is making the most of this announcement, which is a gift to him that may shift the political dynamics in his favor.  Let us pray so.

There is no question that this will be by far the most favorable plan for Israel that has ever been advanced by a US administration.

This does not mean, however, that all right wing elements in Israel are enthusiastic about it.  While it is likely that it will be recommended that Jerusalem not be divided, and no Jewish communities in Judea and Samaria be dismantled, there is still deep concern about the possibility of a Palestinian state being proposed on part of Judea and Samaria.

A fully sovereign Palestinian state is unacceptable on any part of the Land, both because of ideology and security concerns.

As I write, Netanyahu is on his way to the US. If Gantz has not left yet, he will soon.  Meetings with the president are scheduled for tomorrow.

I will table all further discussion on the issues for now, and watch how matters unfold in the next day or two.