From Israel: The Sun Still Shines

It may be behind the clouds part of the time, and the clouds can get very dark.  But it’s there.  And we need to remember that even when it’s raining.
~~~~~~~~~~
As I had mentioned in my last posting, on Sunday night at the AIPAC Conference, CEO Howard Kohr whole-heartedly endorsed “the two state solution,” saying (emphasis added):

“We must all work toward that future: two states for two peoples. One Jewish with secure and defensible borders, and one Palestinian with its own flag and its own future…

“The absence of a constructive peace process is nothing to celebrate. Israel’s security cannot be fully assured and her promise cannot be fully realized until she is at peace with all her neighbors.”

And this, my friends, was definitely not a sunshine moment.

But it should not have been a huge surprise.  Many of us have been watching AIPAC’s shift leftward for some time now.

Perhaps even more significantly, we’ve also been watching a good part of American Jewry shift left.  It is no secret that AIPAC has been eager to keep young progressive Jews within the fold.  And so, I would not say that Kohr was endorsing anything he and the AIPAC leadership did not embrace.  But I believe that the sense of imperative to speak out on “two-states” was likely driven at least in part by the concern about membership and support.
~~~~~~~~~~
What is most distressing about what Kohr did is that he presented an erroneous picture of Israel’s position.  AIPAC presumably advocates for Israel in Washington.  We’re working hard to educate Washington leadership about viable alternatives to “two-states,” and convey the message that Israel’s relationship with Arab states—states that today seek our assistance in standing against Iran—no longer depends upon on our relationship with the PLO.

We do not need to be undercut here.  And that is the message that was quickly conveyed to AIPAC by a number of prominent people on Israel’s right.

MKs Yoav Kisch (Likud, on left below) and Bezalel Smotrich (Habayit Hayehudi), who co-chair the Knesset Lobby for Eretz-Israel, sent a letter to AIPAC’s leadership and executive board in which they referred to the AIPAC policy as “obsolete.”

While Yossi Dagan, Head of the Samaria Regional Council, in his letter said that AIPAC presented the position of Israel inaccurately and suggested it was time for the organization to “update its talking points.”

http://www.jewishpress.com/news/israel/the-peace-process/settlers-leader-astounded-at-aipac-ceos-call-for-palestinian-state/2018/03/05/
~~~~~~~~~~
Others spoke out on this as well:

Deputy Foreign Minister Tzipi Hotovely (Likud) called on AIPAC to “change the record with respect to many basic understandings about the Israeli-Palestinian conflict.”

And MK Yehuda Glick (Likud) argued that if AIPAC “pretends to represent the official position of the State of Israel to elected officials in the United States, it must do so faithfully.”

It is, in fact, less than three months ago that the Likud Central Committee voted unanimously for a resolution calling for application of sovereignty to portions of Judea and Samaria. This does not constitute an “official position” but sure serves as an indication of where our people are headed.
~~~~~~~~~~
Thus it was with attention to this issue that I listened to Netanyahu’s speech on the last day of the Conference.

His delivery was vintage Bibi and he was quite clearly enjoying himself. 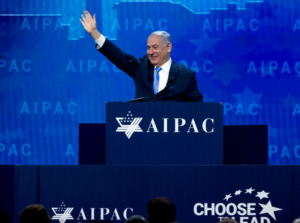 He thanked President Trump enthusiastically for recognizing Jerusalem as Israel’s capital.  And then he shared information about a variety of Israel’s stunning successes with regard to strategic military capability, superb intelligence, cybersecurity, hi tech, agricultural development, water management, and more – with a look at what we bring to the world by sharing relevant innovations and know-how.

The video of his talk is here:

Within the first 18 minutes you will find his description of Israel’s accomplishments. They are quite amazing:  A light unto the nations, we are having an impact far, far out of proportion to our size. We should all know about these things, and permit ourselves a justifiable pride.
~~~~~~~~~~
As to Iran, the prime minister was brief but quite forceful.

Earlier in the Conference, Ambassador Dermer had established a good deal of the ground work in terms of specifics – the Iranian’s ability under the agreement to continue research and development on advanced centrifuges, for example.

“Darkness is descending on our region. Iran is building an aggressive empire: Iran, Iraq, Syria, Lebanon, Gaza, Yemen, more to come. Now Iran is seeking to build permanent military bases in Syria, seeking to create a land bridge from…Tehran to Tartus on the Mediterranean. And in addition to moving its army, its air force, its navy to Syria to be able to attack Israel from closer hand, it’s also seeking to develop, to build precision guided missile factories in Syria and Lebanon against Israel.

“President Trump has made it clear that his administration will not accept Iran’s aggression in the region. He has made clear that he too will never accept a nuclear-armed Iran. That is the right policy. I salute President Trump on this. And the President has also made it clear that if the fatal flaws of the nuclear deal are not fixed, he will walk away from the deal and restore sanctions. Israel will be right there by America’s side. And let me tell you, so will other countries in the region.”

Here I cut him slack.  Standing where he was – and truly feeling great gratitude for American recognition of Jerusalem as our capital, as well as for Trump’s tough stand on Iran – he could hardly have said anything else.
~~~~~~~~~~
But then he came to the heart of the matter: Mahmoud Abbas and the PA/PLO.  And I felt that our prime minister resorted to game-playing, dancing around the ugly truth.

“…to get peace,” he declared, “President Abbas has to embrace peace and to stop supporting terror.”

Then, after describing how much the PA spends in supporting terrorists, he offered a rhetorical flourish that made headlines:

“I have a message for President Abbas: Stop paying terrorists.”

But look at the implications here: Mr. Abbas (I won’t call him “president”), we are eager for peace, and we are still waiting for you.  We believe that you have the potential to reform.  We hope that you will do it, and stop supporting terror, so that we can advance peace.
~~~~~~~~~~
Yes, he put the onus on Abbas.  But there is a deep and inherent dishonesty in those broader implications.

There are those who suggest that Netanyahu could not have gone further in that situation: There he was, facing 18,000 supporters of Israel, some portion of which is young and progressive.  Did he want to alienate them and drive them to JStreet?
~~~~~~~~~~
But he wasn’t talking to JStreet people, who would not have heard him in any case.  He was speaking to people who had chosen to attend a pro-Israel conference.  I would suggest that they deserved to hear the truth, and that nothing less will serve Israel’s best interests.  We have skirted around this all too long.

Actually, I would suggest that in light of Kohr’s earlier statement, the Conference attendees should have been offered another perspective.
~~~~~~~~~~
In my opinion, Prime Minister Netanyahu should have said something like this:

For a long time we were convinced that if we reached out enough, we might find a way to a peace agreement with the Palestinian Authority.  Today we know that their leadership, beginning at the top with Mahmoud Abbas, has no intention of backing away from support of terror.  This is very clear: not only does Abbas not have the intention, his own people would not permit it.  Asking him again, begging him for the hundredth time, would not achieve it. Even when President Trump asked, Abbas would not do it.

And so we will implore him no longer.  We refuse to posit that our having peace depends upon moderation in the Palestinian Authority. That would leave us in a terrible place. Instead, please know that we are working on other ways to bring peace to our region.  We are considering approaches that would be respectful of all decent people, with care for the legitimate concerns of the Israeli people.
~~~~~~~~~~
Let me here recommend an article – “Those who seek peace are seen as losers” – in which Mid-East academic Dr. Mordecai Kedar explains the Arab mindset.

“Whoever seeks peace is seen as a person who has already lost the battle. He’s weak and he’s asking for mercy, begging that they should leave his head attached to his shoulders. After he loses the battle, he asks for mercy and calls it peace….the moment we seek peace, peace runs away from us.” (Emphasis added) 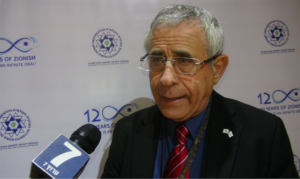 ~~~~~~~~~~
Outside of the venue of the Conference, in the Blair House (official guest house for American presidents), Prime Minister was a bit more forthcoming.

He never speaks about our rights to the land, but he did say, when asked about a “two-state solution,” that it is necessary for Israel to retain security control over the Land.  Without stating it explicitly, he was saying “two-states” will not work.

http://www.israelnationalnews.com/News/News.aspx/242804
~~~~~~~~~~
It was also outside of the venue of the Conference that “more than 300 conference attendees gathered at the prestigious Sixth & I Historic Synagogue on Monday to express support for the nearly 500,000 residents of Judea and Samaria…

“AIPAC leaders did not permit the session…to be included within the conference’s vast schedule. Yet the high-profile event was co-sponsored by Israel’s Ministry of Strategic Affairs.”

There are some here who are suggesting that it is time to re-evaluate our relationship with AIPAC. And that seems to me a very good idea.
~~~~~~~~~~~~
I close with an embarrassing correction: When writing about Farrakhan in my last posting, I said he was founder of the Nation of Israel, when I meant Islam.  Obviously an inadvertent error that I suspect most of you passed right by, reading what I intended.  But I still think I deserve about 30 lashes with a wet noodle for this.

Speaking of Farrakhan, there is a hullabaloo about the fact that it has been revealed that some seven Democratic Congresspersons have a relationship with this virulently anti-Semitic man.  It just may be time for progressive US Jews to ask themselves a whole lot of questions with regard to their political allegiance and perceptions to date.  For another day…
~~~~~~~~~~