From Israel: The Critical Response

In the early hours of Saturday morning, for the very first time the Iranian military launched a direct military operation against Israel, when a drone (UAV) commanded from the Tiyas Military Airbase in the Homs desert region in central Syria was dispatched into Israeli air space.

According to a statement from the IDF spokesperson’s unit, “Iran and the Quds Force of the Revolutionary Guards have been operating there for a long time, backed by Syrian army forces and with the approval of the Syrian regime.”

Until now attacks against Israel prompted by Iran were done via its proxy, Hezbollalh.  This was the first time Iranian soldiers used Iranian weapons to attack Israel. Ostensibly, the Iranians have been using the base deep inside Syria for operations against Islamic jihad forces, but clearly more is intended by Iran.
~~~~~~~~~~
The on-coming drone was identified and tracked when it was still in Syrian air space; about a minute and a half after it crossed the border from Jordan into Israel (near Beit She’an, see map), it was brought down by an Apache combat helicopter.

Its presence in Israeli air space represented a “severe violation of Israeli sovereignty” that required an immediate and strong response. 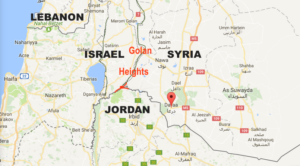 ~~~~~~~~~~
The drone was allowed to enter Israeli airspace before being brought down so that we might retrieve and examine it.

Said IAF Chief of Staff Brig. Gen. Tomer Bar, it was important “to get our hands on it…We’ll study this UAV. This is the first time an Iranian drone has crossed into Israel.”

Preliminary reports are that it heavily resembles a US stealth drone that was downed in Iran in 2011—the Lockheed Martin RQ-170 Sentinel aerial reconnaissance UAV.

Two years ago the Revolutionary Guards presented a model, pictured below, based on the Lockheed UAV, that had advanced intelligence gathering systems, communications systems and radar systems. General Amir Ali Hajizadeh, of the Revolutionary Guards’ Air Force and Aerospace Division, said at the time that the Iranian model “is easier, faster and consumes less fuel than its source.” 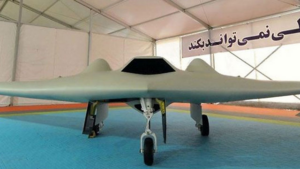 This model has a low magnetic signature, and there are rumors, currently unsubstantiated, that it may have been armed.
~~~~~~~~~~
The IDF released several pictures of the drone and its interception, in part to put the lie to Iranian claims that Israel invented the entire story. 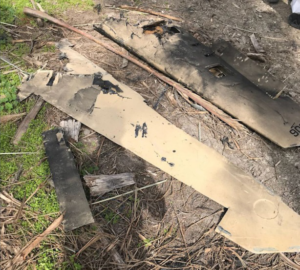 ~~~~~~~~~~
I have encountered several theories regarding why Iran launched this drone: To be used as part of an orchestrated attack on Israeli civilians, or for surveillance and intelligence gathering.

It was also very likely done to “test the waters,” i.e. to measure the way in which Israel would respond and discover how vulnerable Israel is to such incursions.

And lastly, it would have been an attempt to tarnish Israel’s image of invincibility and garner propaganda leverage.

Whatever the difficulties encountered by the Israeli air force (see below), there is something of a consensus here that Iran garnered no propaganda points with this operation, but the contrary, and learned some tough lessons regarding Israeli response.
~~~~~~~~~~
After the drone was taken down, Israeli dispatched F-16 jets into Syria to hit the Iranian command center at the Tiyas Airbase that had sent the drone. This was a “complicated and surgical strike,” executed in the midst of heavy Syrian anti-aircraft missile fire.

According to IDF Spokesman Brig.-Gen. Ronen Manelis, the decision of forces in Syria allied with Assad to fire air defenses against Israeli jets was evidence of their readiness to interfere in Israel’s fight against Iran’s activity in the country.

“Iran’s mask has been removed.  It is clear that they are using Syria as a launch-pad for activity against Israel.  Iran is dragging the region into an adventure and will pay the price.”

Among the dozens of anti-aircraft missiles that were fired, some came into Israeli airspace, generating sirens in the area and a rush to shelters.

All Israeli jets returned back.  However, one F-16 was damaged (precisely how is still being investigated) and crashed in the Beit Netofa Valley in the lower Galil.  The two crew members of this jet ejected; one was several wounded and the other only slightly injured. They were evacuated to Rambam Medical Center in Haifa.
~~~~~~~~~~
Following the downing of the jet, Israel then sent eight jets back into Syria to strike 12 different Syrian and Iranian targets, including three Syrian SA-5 and SA-17 defense batteries and four other Iranian sites.  One of the targets hit was the Abu Al-Thaaleb Sir Base, home of Syria’s First Armored Division and part of Iran’s buildup in Syria.

Said IDF spokesman Manelis (emphasis added), “Iran and Syria are playing with fire.  The results of our strikes are not yet fully known to them [Iran] and they may be surprised when they discovered what we targeted.”

These strikes constituted the most intense IAF bombing in Syria since the First Lebanon War in 1982.

The Syrians again responded by firing anti-aircraft missiles, some of which once more triggered air raid sirens on the Golan and Upper Galil. Several missiles hit open area in northern Israel, but there was no damage done.

https://www.timesofisrael.com/idf-f-16-appears-to-have-been-downed-by-shrapnel/
~~~~~~~~~~
Maj. Gen. (res.) Amos Yadlin—who previously headed Military Intelligence and was once himself a fighter pilot—rejected claims that the downing of the F-16 showed that Israel had lost its air superiority.

“True, sometimes there are loses, or mistakes on our side, but the balance is unequivocal,” he tweeted.

“Israel demonstrated its abilities to defend its skies; it struck for the first time directly Iranian forces in Syria and exacted a price from Iran; it destroyed many Syrian SAM [surface to air] sites and left Damascus exposed to future attacks.” (Emphasis added) 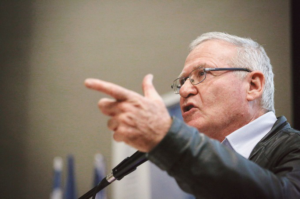 ~~~~~~~~~~
Part of the message coming from the IDF today was this: “In the Iranian action, all the Israeli warnings against Iranian consolidation in Syria were realized.”  And indeed this is so.

Saturday night, after the events of a very stressful and significant day, Prime Minister Netanyahu came together with Defense Minister Lieberman and ID Chief of Staff Lt.-Gen Eisenkot in the Kiriya, military headquarters in Tel Aviv, for meetings and a public statement.  The prime minister said that he had been warning about the dangers of Iranian entrenchment in Syria for months.

“Iran seeks to use the Syrian territory to attack Israel for its professed goal of destroying Israel.  Israel’s warnings were 100% correct.

“Our policy is absolutely clear: Israel will defend itself against any attack and any attempt to harm our sovereignty.

“This [defending against violations of our sovereignty] is both our right and our duty and we will continue to do so as much as necessary.  Let no one make a mistake about this.” (Emphasis added) 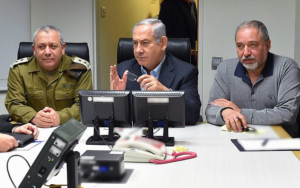 ~~~~~~~~~~
Prime Minister Netanyahu let it be known last night that he called Russian Prime Minister Putin, with whom he has maintained a good relationship, and addressed Israel’s right and obligation to defend itself from attacks emanating from Syrian soil.

Russia is a major player in Syria and has significant responsibility for the fact that Assad has not departed from the scene.  Unless I am very much mistaken, the very anti-aircraft missiles used against Israel were supplied, at least in part, by Russia.

And yet, there have been some very significant understandings reached between Putin and Netanyahu.  During the aerial operations in Syria on Saturday, great care was taken to avoid hitting any Russian installations or equipment in the area.

Russia seeks stability in Syria, and, while certainly not an Israeli ally, is not likely to be pleased with what Iran is doing.  There is speculation that Russia may have some capacity to damp down Iran’s aggression.
~~~~~~~~~~
Where we DO have an ally is in the US, and I thank Heaven that Donald Trump is in the White House.  A White House release stated that:

“Israel is our closest security partner in the region and we fully support Israel’s right to defend itself against threats to its territory and its people.”

A State Department statement indicated that the administration is “deeply concerned” by escalation of action at Israel’s northern border and “strongly supports Israel’s sovereign right to defend itself.”
~~~~~~~~~~
That a significant line has been crossed is obvious.  Yaakov Katz, editor of the JPost, says the open war with Iran has begun (emphasis added):

“For the most part, until now, this war has been fought behind the scenes.  Who needs to know, knows, and while some details occasionally make their way to the public domain, most do not.

“The question will be whether Israel succeeded in boosting its deterrence.”