From Israel: Storm Clouds and Sun

I’m going to start with the good news.  It’s such a pleasure to have news to share.

It is hardly a secret that Prime Minister Netanyahu’s greatest strength is in the diplomatic sphere. He has an exceptional capacity for forging relationships with foreign leaders, thus bolstering our position in the world.  This week we had visits of significance from two of those foreign leaders.

Czech President Milos Zeman arrived here on Sunday for a four day visit.  On Monday, he addressed the Knesset, the first time a Czech leader has done so. 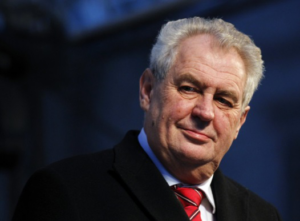 Then on Tuesday he formally opened the “Czech House” in Jerusalem, an office space where Czech diplomats will conduct meetings without diplomatic status. He calls this the second step towards relocating his country’s embassy to Jerusalem. He initiated the first step in April with the appointment of an honorary consul in Jerusalem.

Zeman is staunchly pro-Israel, but his powers are limited. Czech Prime Minister Andrej Babis is opposed to moving the embassy because this would be to defy EU policy.  Zeman had a thing or two to say about this when he spoke to the Knesset (emphasis added):

We Europeans… I speak about the EU, in fact, are sometimes hesitating…We sometimes are cowards… And that’s why it is necessary all the time the solidarity with Israel. Because [if we] betray Israel, we betray ourselves.”

https://www.algemeiner.com/2018/11/26/israels-best-friend-czech-president-milos-zeman-calls-for-european-solidarity-with-jewish-state-in-knesset-address/
~~~~~~~~~~
Visiting at the same time was Chad’s President Idriss Déby, who arrived Sunday evening and stayed through Tuesday. 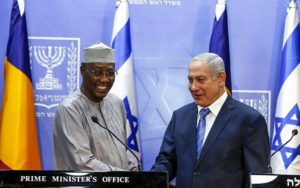 Chad, a central African majority-Muslim nation of some influence in its region, has had no diplomatic relationship with Israel since breaking ties in 1972.  Déby, who acknowledged that times are changing, said, “We came here this time with a precise plan…the goal was to renew this connection…

“…this will happen in the coming days or weeks.”

The president indicated a willingness to help Israel in establishing a diplomatic relationship with Sudan, its neighbor to the east, as well – something he suggested might be coming soon.  The situation in Sudan has been undergoing considerable changes: previously Sudan served as a conduit for Iranian weapons on their way to Hamas in Gaza, but its ties to Iran were broken last year.  Even earlier, Sudanese Foreign Minister Ibrahim Ghandour suggested that Sudan might be open to the idea of normalizing ties with Israel.

Last year a Foreign Ministry envoy, Bruce Kashdan, held secret meetings in Istanbul with Sudanese officials at which the warming relationship between the two countries was discussed.

http://www.israelnationalnews.com/News/News.aspx/255355
~~~~~~~~~~
There will be Israeli-Chad bi-lateral cooperation on a number of matters, such as agriculture and water.  But the key focus of cooperation between the two countries will be security.  Observed Déby, “Your country, like Chad, fights against terrorism.”  Chad is involved in operations combating Boko Haram and Islamic State.

The fact that Israel is so knowledgeable about anti-terrorism, said Déby, “paves the way for additional countries to recognize the State of Israel, and I think you will be hearing about them very soon.”

It should be noted here that he also made it clear that Chad had a stable relationship with the PA.
~~~~~~~~~~
Israel has an interest in securing permission to fly in the airspace of certain African countries in order to facilitate shorter flights between Israel and Latin America. Déby was positively disposed to this, and it is hoped that ultimately Sudan will be as well.

The Gulf state of Oman, where Netanyahu visited in October, has already agreed that Israeli flights – including El Al – can cross its airspace.
~~~~~~~~~~
Shortly after the end of Déby’s visit, the prime minister’s office announced that Netanyahu would be going to Chad “soon” to finalize the resumption of ties.
~~~~~~~~~~
It was reported on Wednesday that Roi Sheindorf, Israel’s deputy attorney general for international law, had held consultations with officials of the International Criminal Court (ICC) in The Hague with regard to Israel’s intention to dismantle the village of Khan Al-Ahmar.

According to this report, ICC officials indicated that the evacuation was “possible.”

This, too, is good news.

The outpost is illegal, having been built in Area C with the assistance of the PA and the EU without Israeli permission. It should have been taken down long ago, as it is in the strategically critical E1 area; our High Court has sanctioned its dismantlement.

However, if developing solid relationships with foreign leaders is his strong point, handling situations such as this one with strength and determination is Netanyahu’s weak point. He cancelled the scheduled dismantling of the outpost, saying he wanted to work with the residents first.

The EU and the UN have been making noise about destruction of the outpost being a “war crime.”  That this argument has been demolished makes it ever more important that he act with all possible speed. And now he is minister of defense, so that the Civil Administration falls under his direct jurisdiction.
~~~~~~~~~~
Meanwhile, Attorney General Avichai Mandleblit is drafting an opinion stating that the ICC has no jurisdiction to discuss matters concerning the Israeli-Palestinian Arab conflict because “there is no Palestinian state”: The Court has no jurisdiction over Israel, which is not a member of the ICC, and no jurisdiction over Judea and Samaria, as this area is not a Palestinian state. 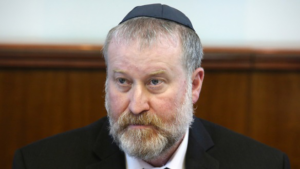 In 2015 the Palestinian Authority signed the Rome Statute (the treaty that established the ICC) and formally accepted the Court’s jurisdiction over its area.  There is however, a challenge to the legal validity of this position. The PA seeks to secure ICC action to charge Israeli officials with “war crimes” over the establishment of “settlements.” But ICC prosecutor Fatou Bensouda has yet to rule on whether there is a basis for investigating these Palestinian Arab charges.

https://www.timesofisrael.com/attorney-general-icc-cant-rule-on-conflict-as-there-is-no-palestinian-state/
~~~~~~~~~~
All in all, Mahmoud Abbas is not doing very well.  He is seeking an emergency meeting of the Arab League to discuss the fact that Arab/Muslim states were supposed to shun Israel until a Palestinian state had been established.  The reality has shifted and these states are no longer finding the Palestinian Arab issue to be their priority.

Earlier this week, Saudi Crown Prince Mohammed bin Salman stopped in Cairo to consult with Egypt’s President Abdel Fattah El-Sisi in the course of a multi-nation tour he has been doing. 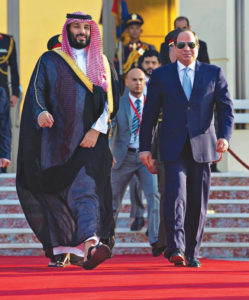 According to Al-Arabi Al-Jadid, Egyptian diplomatic sources are saying that the two discussed the importance of as many Arab states as possible working within the framework of the American “peace deal,” and the steps necessary to encourage those states to establish warm relations with Israel.  (Emphasis added)

http://www.israelnationalnews.com/News/Flash.aspx/439211
~~~~~~~~~~
Three days ago, US Ambassador to Israel David Friedman held a press conference regarding the launch of that US “peace deal,” which he refers to as Trump’s “vision for comprehensive peace between Israel and the Palestinians.” He says reports concerning this have been “widely inaccurate”: “Those anonymous ‘experts’ who purport to speak for the administration on this issue are ill-informed and mistaken.”

The plan will be released, he said, “when the administration concludes that we have maximized its potential for acceptance, execution and implementation,” whenever that will be.

https://www.jpost.com/Israel-News/Friedman-US-peace-plan-to-be-released-when-time-is-ripe-572844
~~~~~~~~~~
It would be very hard to believe, in light of everything that has been discussed, that the plan does not include involvement of Sunni Arab states and a large economic component to soften the deal for the Palestinian Arabs (Hamas and PA alike).

I continue to believe that Jason Greenblatt and Jared Kushner are sincere in their intentions but naïve with regard to the expectation that radical ideology can be defeated, or diminished, by way of financial largesse.

The recent barrage of rockets from Gaza came one day after Israel had permitted Qatar to bring $15 million into Gaza, a time when it would not have been unreasonable to expect Hamas to pull back.  Some analysts see a definite link between the two events – with the rockets launched to demonstrate that Hamas cannot be controlled.  Indeed, there were Hamas leaders who made statements to this effect overtly: Don’t think you can buy us.

The bottom line is that Hamas is not going away and is not going to be pacified.  Already they are making threats about increasing the “demonstrations” at the fence.
~~~~~~~~~~
There are reports that Hamas has offered to turn over control of Gaza to the Palestinian Authority, on condition that a unity government be formed within 45 days and that elections be held within six months.

There is no way that Hamas intends to turn over everything, including its considerable arms cache, to the PA.  They remain dedicated to their ultimate goal of destroying Israel, whatever ruses they rely upon in the short term. Hamas expects to maneuver itself into a position in which its control is recognized as legitimate, I.e., via agreements and elections.

http://www.israelnationalnews.com/News/News.aspx/255463
~~~~~~~~~~
And with this we have an inkling of the storm clouds that hover over Israel:

News media sources here have been heavily focused in recent days on our military capabilities, and what we should brace ourselves for, looking ahead.  To my way of thinking, there is too much being discussed publicly that would be better spoken about behind the appropriate closed doors.  These matters should be discussed in appropriate forums, but there is no reason to share the discussion with our enemies.

Residents of Tel Aviv will not be able to enjoy sitting in cafés during the next war, the IDF Home Front Command head Tamir Yadai said on Wednesday…

“In 2019, there will be a more complex and challenging threat to Israel. Along with the capabilities that we are familiar with, there is another geostrategic reality which presents us with new challenges and threats.”

Yadia spoke about multi-front wars, attempts to infiltrate into Israel, and the possible need to evacuate border communities.  Some 250,000 people living in 22 communities bordering Lebanon in the north would be evacuated in the event of a war with Hezbollah. 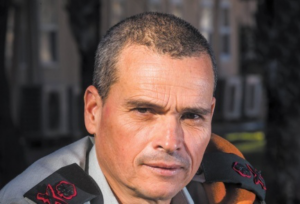 As I wrote last week, Gideon Sa’ar is pushing for a pre-emptive attack on Hezbollah.
~~~~~~~~~~
There are reports of various drills being done by the IDF. In these instances, public exposure may be all to the good, so that our enemies are aware of our intense preparations.

And there continues to be talk without end about deterrence and whether Israel did the right thing in stopping the bombing in Gaza so quickly.  And I am tired without end of reading that so many hundreds of our soldiers would have died had Israel launched a ground war with the intent of toppling Hamas. These arguments feel like a self-serving rationale, for, it was not an all-or-nothing situation, and further action, such as targeted assassinations, might have been undertaken without the use of ground troops.

“To urge a fourth round of warfare against Hamas is no easy matter, least of all at a moment when Israeli decision makers were surprised to learn of an unanticipated fiscal gap of 3.6 percent between state revenue and expenditures. And wars are costly not only in treasure but in lives.

“However, questions about the timing of a fourth round with Hamas must not blind us to the need for it.”  (Emphasis added)

https://www.algemeiner.com/2018/11/27/another-round-not-more-extortion-is-needed-in-gaza/
~~~~~~~~~~
There is never, ever a question about the fact that Israel will prevail, and grow stronger in the process.