From Israel: Sparks inside the Darkness

The darkness, we all know about:  We certainly have not yet learned how to escape it, as humankind persists in embracing acts that are, at very best, foolish, when not deeply malevolent.

But those all-important sparks—emanating from within the darkness—remind us of what is possible. They provide strength and inspiration,A and sometimes awe, if we take the time to notice them.
~~~~~~~~~~
Last week, there was one particular event that deeply moved me –- as I am certain many of you – with its message of remarkable resilience in the face of consummate evil.

I am speaking of 11-year old Moshe Holtzberg.

Nine years ago, his parents, Rabbi Gavriel and Rivka Holtzberg, were massacred in the horrendous terror attack perpetrated by Pakistanis at the (Nariman) Chabad House in Mumbai. Barely more than a toddler, Moshe sat on the floor next to his dead mother, in a pool of her blood, crying, “Ima, Ima!” when his Indian nanny, Sandra Samuel, ran in, grabbed him and hid with him in a closet, saving his life. 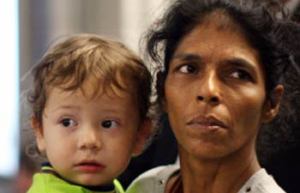 ~~~~~~~~~~
Sandra, who was granted Israeli citizenship and lives with Moshe and his maternal grandparents here in Israel, is herself a spark of light. No question.

And Moshe?  Extraordinary: He was given an opportunity here in Israel last summer to meet Indian Prime Minister Modi, who extended an invitation to him to come visit.  And so, last week he traveled with Prime Minister Netanyahu, and his grandparents, and Sandra, to India.

Not just to India, but to Mumbai, and to the Chabad House where his parents were slaughtered. The entire floor where it happened has been retained just as it was, without renovation.

There, at the very spot where he was rescued, he dedicated a memorial to his parents, and said a prayer of thanksgiving, that his life had been spared.

He then invited Prime Minister Netanyahu to come back to Mumbai in two years, to attend his bar mitzvah, which will be held at this Chabad House. 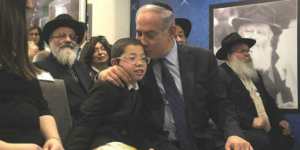 ~~~~~~~~~~
There is a great deal going on, and much to write about.  But I decided that this story merited special attention.  Not only because of the courage of Moshe, but because I believe he epitomizes the best of the Jewish people.

He clearly understood the loss and the horror.  Yet he didn’t approach the event with anger, bitterness or self-pity, but rather with gratitude and an ability to look forward to a good future.

He embraced life, as undoubtedly, he is being taught to do.

This is precisely what our people have done, again, and again, and again.  This attitude, with gratitude to the Almighty, has enabled us to come to this day, to see a thriving Jewish state.
~~~~~~~~~~
Vice President Mike Pence—a deeply religious evangelical Christian who reads the Bible daily—is the exceedingly rare political figure who truly understands this.

The vice president arrived here in Israel Sunday evening, for a two-day visit. In his press conference with Prime Minister Netanyahu yesterday, he related the fact that every time he and his wife travel to the Holy Land, they leave with “a reinvigorated faith in God…and the Jewish people.”

On Monday, Pence became the first US vice president ever to address the Knesset.  His words were most welcome, starting with the fact that he said he was so glad to be in “Jerusalem, the capital of Israel.”

With regard to this, he announced that the US embassy would be located in Jerusalem before the end of 2019.
~~~~~~~~~~
This is very welcome news.  The timing makes it clear that he is referring to plans to refurbish an existing facility and not build a new one from the ground up – at least as an interim step, if not permanently.

The tension inherent in deciding between building a new facility – which could take up to 10 years – and refitting an existing one has been evident for some days.  While in India, Netanyahu said he had information that the US would have an embassy in Jerusalem in about a year, to which Trump responded, no, it was going to take much longer than that.  Turns out that Netanyahu’s information was correct.

Serious speculation has it that the Diplomat Hotel in Talpiot, not far from the US Consulate, will be refitted as embassy. 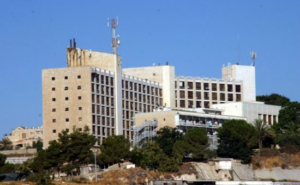 The building is already owned by the US government.  It has been serving as a long-term residence for some 500 aging Russian immigrants, who require relocation.

An alternate rumor is still out there, regarding use of the Consulate in Talpiot as the Embassy. This would require relocating consular staff, and my best understanding is that this facility would not be nearly big enough.
~~~~~~~~~~
But far more important than this was what Pence had to say about Iran:  The US will never allow Iran to acquire a nuclear weapon.

The Iran deal, he declared, is a disaster.  The president has waived sanctions for the last time:  Unless the deal is fixed, the US will withdraw.

The US, explained Pence, is concerned about Iran’s development of ballistic missiles and its massive involvement in promoting terrorism, as well its clandestine nuclear development.

Sounds as if the Trump administration has got it right!

You can see the vice president’s full remarks at the Knesset here:

https://www.youtube.com/watch?v=eHqKpCvCMlI
~~~~~~~~~~
As Pence was about to begin speaking, Arab MKs from the Joint List, who had originally said they would boycott the speech, rudely and inappropriately began a loud protest.  They were immediately hustled from the plenum by security personnel, to much applause.

Pence handled the situation with enormous aplomb, coolly commenting that it was humbling to speak before such a “vibrant democracy.”

http://www.israellycool.com/2018/01/22/must-watch-us-vice-president-mike-pences-epic-response-to-disruption-by-arab-mks/
~~~~~~~~~~
What we need to note is that last night Pence said he had come to Israel “simply to celebrate and affirm the bond between our two peoples.”  With President Trump in the White House, he predicted, “…the best days for our most cherished ally, Israel, are yet to come.”  Let it be! 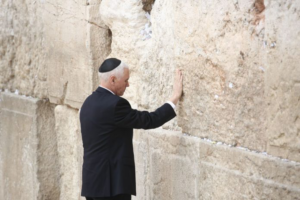 ~~~~~~~~~~
Before coming to Israel, Pence met first with Egyptian President Abdel Fattah al-Sisi, in Cairo, and then with Jordanian King Abdullah II, in Amman.  This was important for wider diplomatic reasons, particularly with regard to cooperation on issues such as terrorism and Iran.

Each leader, in turn, emphasized the importance of a “two-state solution” with eastern Jerusalem as the capital of a Palestinian state.  Pence’s unapologetic position was that this was a disagreement among friends.

What he did say to them, however and reiterated here in Israel, is that the Trump administration has not ruled out “two states” if both parties agree, has not defined the final borders of Jerusalem, and has called for maintenance of the status quo.

There remains, and I think perhaps there must be at this point, a certain diplomatic political correctness exhibited by the US that is difficult for us – in particular with regard to Jordanian Wakf control of the Temple Mount and insistence that Jews not pray there. But how far we have come.
~~~~~~~~~~
The Palestinian Authority, as Abbas had predicted, refused to have any contact with the vice president.

Pence made an appeal to them, saying he hoped they would change their minds because peace can only come via dialogue.

Again, it is obvious that he must say this, and I have to think that he doesn’t really believe they will respond to his appeal. But always, I wonder about unrealistic expectations.  That he says this to show Al-Sisi and Abdullah that he’s trying is one thing, that he imagines Abbas might moderate is quite another.
~~~~~~~~~~
What Abbas did instead was attempt a diplomatic end-run around the US. This is his MO, anything but sincere negotiations:

On the day that Pence addressed the Knesset, he went to Brussels to meet with European High Representative for Foreign Affairs Federica Mogherini.  His request was that the EU recognize a Palestinian state within ’67 borders (sic).

Is there anyone—anyone!—who takes this breath-taking liar at his word? Do the ministers of the EU states simply grit their teeth and nod?
~~~~~~~~~~
“You’re the main partner in building a Palestinian state,” Abbas told Mogherini.  What he was seeking, of course, was a replacement for the US as negotiator.

But Mogherini, for all her supportive words, wasn’t having it.  At a joint press conference, she spoke to Abbas of the EU’s commitment to the Palestinian state-building process.

And she reassured him of the EU’s “continued support, including financial.”  That is, via UNRWA, which, she said does work that is “invaluable,” ensuring Palestinians’ “access to basic services such as education, health and jobs, pending resolution of their situation.” (Emphasis added)

While I am quite certain that Abbas was not amused, I find this quite funny.  She was addressing Trump’s cut back in funds to UNRWA, and assuring Abbas that the EU would help make up the deficit.

However, supporting UNRWA has nothing to do with a Palestinian state-building process. Quite the contrary:  UNRWA is dedicated to sustaining pseudo-refugees in a state of limbo until they “return” to villages in Israel that no longer exist. In fact, it was years ago that the PA declared the “refugees” would not be citizens of a Palestinian entity, because their “place” was back in Israel.
~~~~~~~~~~
As to recognition of a Palestinian state, Mogherini made no offer on behalf of the EU. Rather, she said that she saw a “central role” for the EU, alongside the US, within a multilateral framework to mediate between the PA and Israel.

Just days ago, Netanyahu said that if Abbas “doesn’t want the US as a mediator, he doesn’t want peace…There is no substitute for the US.” (Emphasis added)

http://www.jpost.com/Israel-News/Netanyahu-If-Abbas-rejects-the-US-as-mediator-he-doesnt-want-peace-538207
~~~~~~~~~~
Here we have Mogherini greeting Abbas.  I would like to ask her, How could she? But never mind. 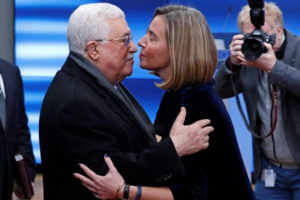