From Israel: Slip-Sliding Away

It has been two weeks since I’ve posted – an inordinate amount of time for me.
But I have been hard at work on my new, upgraded website, which I hope to
unveil within days.

Today is November 29, kaf tet b’november – an auspicious time to pick up on my posting:

In 1947, on this date, the UN General Assembly passed Resolution 181.  This is popularly known as “The Partition Plan,” even though this is something of a misnomer.

The popular misconception is that the UN proposed two states – one Jewish and one Arab – within Mandate Palestine (that is, within land area that was recognized under international law to be Jewish Homeland).

The reality was far more complex, as what was proposed was a federation of two states that would involve a complex set of conditions – shared currency, postal service, transportation and more.

To this day, Palestinian Arabs and their supporters point to this resolution as evidence of their “right” to a state.  They could not be more wrong:

This is so first because General Assembly resolutions are only recommendations, and are not binding under international law.

And then, because, while Israel accepted, the Arabs refused.  Once they refused, according to international law, they have no right to benefit from what they rejected.

The federation that was recommended by Resolution 181 required the active involvement of the UN to put it in place, with all of the various parameters necessary. To that end, a commission was appointed, but it never met and was ultimately disbanded.

The Jews accepted the plan as it was spelled out with regard to the union of two federated states with all of the defined parameters.

But as arrangements for that union were never set in place, it was all null and void. Certainly Israel has no obligations with regard to this resolution today.

One other important point to be made: Israel was not established by virtue of this resolution.

Jews rejoiced at the vote. 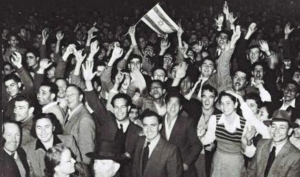 But this was because it acknowledged the right of Jews to establish a state.

The right existed: the land was ancient Jewish homeland dating back millennia, and the Mandate for Palestine had already established this fact within international law.  But the acknowledgement by the international community at that particular point in time was important, paving the way for it to more readily become reality.

There was no way for the international community to deny Jewish rights to a state, primarily because of the Mandate, but also because of Jewish readiness to cooperate in 1947.

The following May 14, 1948 (the 5th of Iyar 5708), David Ben Gurion proclaimed independence, thus establishing the modern State of Israel.

It is just slightly over a year since the presidential election.  I do not regret that it was Donald Trump who was victorious.  Matters would have to be a whole lot worse (Heaven forbid!) for me to feel that way — for the alternative, Hillary Clinton, would, in my opinion, have been a (Palestinian Arab friendly) horror.

Yet it is Donald Trump’s no-nonsense position, which I welcomed in many respects, that I now see “slip sliding away.”  This is more than simply disappointing, it is distressing and worrisome.

For a short while, Trump appeared to be tough, most notably, with the PA’s Mahmoud Abbas.  Back last spring, he demanded that the PA stop salaries for terrorists in Israeli prisons, which Abbas adamantly refuses to do.

When Trump met Abbas in Bethlehem in May, reports were that he was angry and yelled at Abbas for having “tricked him,” by leading him to believe that he supported peace when in fact he was inciting.

Photos from that meeting showed a disgruntled Trump. 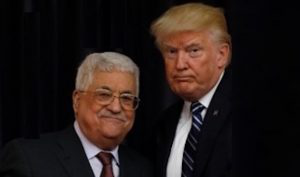 And so it was possible to think that finally someone had Abbas’s number.

Yet that did not last long.

Before we knew it, members of a Trump team – Jared Kushner; Jason Greenblatt; Ambassador David Friedman; and Dina H. Powell, an Egyptian American from the Bush administration and a rising star in the Trump administration – had started their “fact-finding” visits to the region to explore the possibility of “peace negotiations.”  There were, we learned, also consultations with the consul in Jerusalem (whose consulate serves as an unofficial embassy to the PA).

Anyone thinking straight had to wonder what Trump could have in mind: He KNEW Abbas was a lying bum who wasn’t promoting “peace.” He knew it, and yet he sent members of his team to Ramallah to talk things over.

By early November we were told that the team had completed their “fact-gathering,” and were going to put together a concrete plan that would address all of the issues.  To be announced in a few months.

That there will be no final peace agreement is a given, because the Palestinian Arabs do not want one. They want to weaken and delegitimize Israel.  Any Palestinian Arab leader who signed on for cessation of hostilities and recognition of a Jewish state would likely be signing his own death warrant.  There will always be an excuse, a reason to walk away.

But before that happens, a great deal that is troubling can transpire.  We are dragged down a fruitless dead end.

In recent weeks we have been seeing signs of pressure from the White House, however subtle, that brought Netanyahu to backtrack on building plans.  He didn’t want to cross an “Israel-friendly” administration, he said.  And so there were reports that he wanted plans to be checked first with the White House – which is not how matters ought to be in a sovereign state.

What the parameters of the “new peace plan” will be are as yet unknown.  The Trump administration has said this will be different, and that it may require years of work.  A NY Times report, which the White House disavowed, described a plan much like others we have known.

There has been a great deal of speculation as to why Trump would go this route, attempting, with consider hubris, to resolve a conflict that demonstrably cannot be resolved.

There is speculation that he is the ultimate deal maker who is determined to take on the challenge precisely because it is a challenge.  Perhaps. But I see something else, with regard to Trump’s courting of the Sunni Arab world, most notably the Saudis, in a move against Iran. 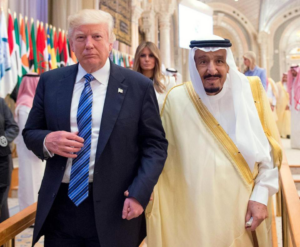 Whatever his motivation, in recent days there has been more slip-sliding of a serious nature by the Trump administration.

On November 18, reports surfaced with regard to the PLO office in Washington DC (which is a “mission” – similar to, but less than an embassy, as the US does not recognize a Palestinian state). 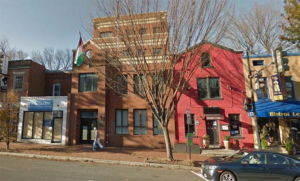 Secretary of State Tillerson indicated that he was not able to provide certification because in September at the UN General Assembly Abbas urged the ICC to “open an investigation and to prosecute Israeli officials for their involvement in settlement activities and aggressions against our people.” 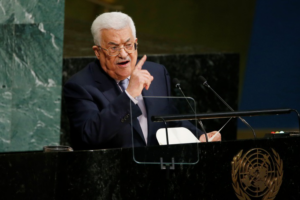 The State Department let it be known that this was a “technical move,” one over which they had no control.  (Read: we really don’t want to do this.) Hope was expressed that the office would not have to be closed long:  The president is empowered to open it again in 90 days if there is a demonstration of good will towards working on peace.

A State Department official made further attempts to soften this action, explaining that:

“We are not cutting off relations with the PLO, nor do we intend to stop working with the Palestinian Authority.”  He reiterated that American intention to work for peace remains strong.

What the administration was looking for was a gesture by PA officials to show that they wanted to work for “peace.”

What they got from the PA, however, was just the opposite. Figuratively, the PA spit in the face of the Americans:

PA foreign minister Riyad al-Malki said that the PA would not give in to “extortion” from the Americans, and declared that “The ball is now in the American court.”

A couple of days later, Abbas put out an order “regarding closing down all communication lines with the Americans.”

“In practice by closing the office they are freezing all meetings and we are making that official,” declared Malki.

That certainly was not true, and later there was a slight backtracking on this.  It was not, however, a positive message that was being delivered.

So how did the Trump administration respond? They responded by reversing themselves and announcing that the office would not be closed.

Along with the announcement there was a face-saving proviso. A State Department official explained that the U.S. had “advised the PLO Office to limit its activities to those related to achieving a lasting, comprehensive peace between the Israelis and Palestinians.” 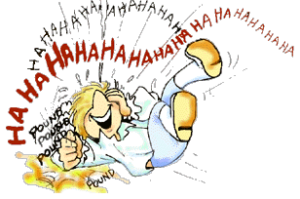 Of course, it’s not really a laughing matter at all, because now the Americans have the clout of a wet noodle.

A watching world will be inclined to brush off the Americans from this point on.  Terribly unfortunate, in this troubled time when a serious US stance of deterrence against radicalism is so badly needed.

All of this, to appease the PA leaders so they will keep talking to the Americans about the “peace process.”

The State Department expressed a hope that within 90 days there would be serious negotiations going on.  This leads me to ponder whether – in spite of all Trump’s claims about having no deadlines – 90 days is now a goal they’ve set for themselves for getting the parties to the table.

Yesterday, at an event to mark the 70th anniversary of Resolution 181, Vice President Mike Pence spoke. The US, he announced, was “actively considering moving the US Embassy to Jerusalem.” 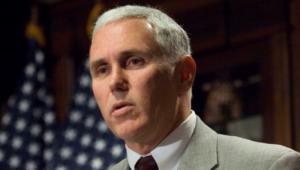 Been there, done that.

Is this a move to help the administration appear balanced?  Trump came into office insisting that he would move the embassy. Then he hedged, and hedged some more.  The stumbling block was the objection of the PA, at a time when the president had decided to “make peace.”

He will still do it, he said, but not yet. Peace first.

I never have been able to figure out why a US embassy in western Jerusalem should interfere with “peace” plans, when the Palestinian Arabs ostensibly claim only eastern Jerusalem. Or more accurately, why the US should respond as if it did interfere, instead of calling the Arabs on this.

And so, my response now is, Sir, please do not tell us. Show us.

For those of you who once enjoyed Simon and Garfunkel: