This post title is apt, first of all, from the perspective of the weather.  This week we have had extraordinary weather for Israel at this time of year.  Torrential, unexpected downpour, and with it, rumbling thunder; on Wednesday, there was even hail.

This has generated flash floods in the Negev, where, horrifically, 10 young lives have been lost. Even here in Jerusalem, streets looked more like rivers.
~~~~~~~~~~
This rumbling weather also serves as metaphor for certain major situations today.  Much is in flux, but before Shabbat, I want to touch upon some of the key issues:

On April 16, NYTimes columnist Tom Friedman (not among Israel’s staunchest friends) made waves when he quoted an “unnamed senior military source” in Israel who said that Israel was responsible for the April 9th attack on the T-4 air base near Homs in Syria.  This is the base from which Iran had launched a drone into Israeli airspace; seven Iranian military personnel were killed in that attack.

This was surprising, because it is Israeli practice to avoid taking direct responsibility for such attacks. To publicly take credit is to push the target into seeking retaliation. The IDF spokesperson denied that a military source had made such a statement and subsequently Friedman walked back his original report.

Nonetheless, Friedman’s original report was repeated broadly in the media – which served to increase tensions between Israel and Iran, and generate projections of an imminent war.
~~~~~~~~~~
Yigal Carmon, President of MEMRI, and A. Savyon, Director of the MEMRI Iran Media Project, have written an analysis of the current situation (emphasis added):

The strategic question for Iran, they say, is whether to respond to attacks by Israel against their targets in Syria, when doing so might lead to an all-out war.

Iran’s goal is to expand militarily inside of Syria, in order to enable it to act decisively against Israel in due course.  From the Iran perspective, it might then be wiser to wait until it had secured this stronger position because launching attack.

On the other hand, Israel has made it clear, both in words and action, that it will not permit Iranian military expansion in Syria.

At present, Iran’s response has been very restrained:

“Tehran’s thunderous silence in light of Israel’s repeated attacks on strategic Iranian and Syrian targets strengthens assessment that Tehran prefers, as of now, to overlook the Israeli attacks…

“Israel has, with its operations, made it clear to Iran and Russia that it is ready for war now…

“Past experience shows that Iran has always refrained from direct confrontation with the Gulf States, with Israel, and with the U.S., despite its far-reaching threats to wipe Israel, the U.S. military, and Saudi Arabia off the face of the earth.

https://www.memri.org/reports/iran-faces-strategic-decision-%E2%80%93-whether-respond-israels-operations-against-its-military
~~~~~~~~~~
In the meantime, Russia’s Ambassador to Israel, Alexander Shein, is playing down tensions between his country and Israel. He emphasized that recent tensions were between Russia and Western countries that attacked Syria, and that this had nothing to do with Israel:

“We are mutually coordinating and updating about Syria … So far, there have been no incidents between us, nor even hints at incidents, and I hope there will not be.”

True enough, but tensions between Israel and Russia have grown in recent days because of talk of Russia supplying Syria with the S-300 missile defense system.

Shein says Russia has not decided yet, but I’ve seen a host of different reports with varying versions of what may yet happen in this regard.

It was the attack on Syria by the US coalition that prompted the possibility of providing Syria with this defense system – not anything Israel had done.  However, once it was in Syria’s possession it might be used to inhibit Israel’s actions against Iran in Syria – actions Israel is absolutely determined to take. (It has been suggested that Russia might provide those missiles, but maintain operational control of them inside of Syria.)

“If anyone shoots at our planes, we will destroy them,” Israeli Defense Minister Avigdor Lieberman said earlier this week.
~~~~~~~~~~
Just yesterday Lieberman gave an interview to the Saudi-owned, London-based Elaf newsite (emphasis added):

“I want to clarify: Every military outpost in Syria in which Iran seems to be trying to dig in militarily, we will destroy. We won’t allow it, whatever the cost. We hear many threats. If they attack Tel Aviv, we will attack Tehran.

“…I don’t advise anyone to try us. We are ready for every possibility. The Russians know that we will not allow Iran to build bases in Syria and to transfer advanced weapons in order to attack us. There are talks and there won’t be any clashes with them.”

https://www.ynetnews.com/articles/0,7340,L-5241923,00.html
~~~~~~~~~~
Lieberman was in Washington when he gave this interview.  He has gone to meet senior American officials, including Defense Secretary James Mattis, to discuss the Syrian situation.

Yesterday he had the opportunity to meet with John Bolton, US National Security Advisor.  Bolton, declared Lieberman, “is a dear friend of Israel and an expert on the Iranian threat….I’m happy that we and the US see eye-to-eye on the situation…” (Emphasis added) 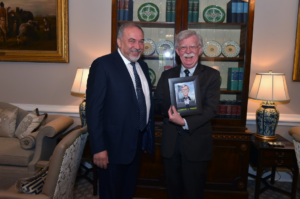 ~~~~~~~~~~
Fadi al-Batsh, a Hamas-affiliated Palestinian Arab engineer and drone expert from Gaza, was assassinated in Kuala Lumpur, Malaysia, on April 21.  His two assailants shot him multiple times when he walked out of his home, killing him instantly, and then rode away on bikes.

They have not yet been positively identified or apprehended.  But police have released computer-generated pictures of them based on witness descriptions. According to the deputy prime minister of Malaysia, they were believed to be “Europeans with links to a foreign intelligence agency.”
~~~~~~~~~~
There are, unsurprisingly, charges from multiple sources that the Mossad is responsible for this attack. In this instance Israel is denying it, not just remaining quiet (as is frequently the case).

“We heard about it in the news. The terrorist organizations blame every assassination on Israel – we’re used to that,” Lieberman told Israel Radio.

“The man was no saint…he was involved in improving rockets’ accuracy … We constantly see a settling of accounts between various factions in the terrorist organizations and I suppose that is what happened in this case.”

There are no sources directly connected with Israel speaking about this.  Nonetheless, Hamas is vowing revenge.

Yesterday, a report surfaced in the NYTimes indicating that al-Batsh was negotiating a deal with North Korea for arms to be brought into Gaza.

https://www.haaretz.com/israel-news/.premium-hamas-engineer-killed-in-malaysia-negotiated-arms-deals-with-koreans-1.6030971
~~~~~~~~~~
Israel refused to allow al-Batsh’s body to be brought back to Gaza for burial via Israel.  The goal was to secure release of the bodies of our soldiers, held by Hamas, in return for allowing al-Batsh in.

Regrettably, in spite of Israel’s requests to the contrary, yesterday Egypt did allow his body to return to Gaza via the Sinai and through the Rafah crossing.  His remains were greeted with celebration.

https://www.jpost.com/Breaking-News/Remains-of-Hamas-engineer-slain-in-Malaysia-arrive-in-Gaza-552813
~~~~~~~~~~
A very strange incident took place in Germany last week.  Adam Armoush (pictured), from a Christian Arab family in Haifa, is studying veterinary medicine in Berlin. Told by a friend that it was dangerous for Jews in the city, he wanted to see “how bad it is to walk Berlin’s streets as a Jew today.”  And so he put on a kippah and went out – and was attacked physically by a Palestinian from Syria. 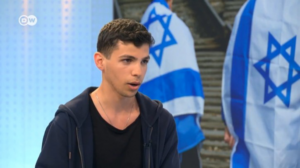 His attacker, who struck him with his belt, repeatedly calling “Yehudi,” was caught on video camera.  After the video went viral, he turned himself in to police.

http://www.israelnationalnews.com/News/News.aspx/244791
~~~~~~~~~~
Responding to this incident, the President of the Central Council of Jews in Germany subsequently recommended that Jews not wear kippahs on the streets of Germany, but wear baseball caps instead.  (Observant male Jews keep their heads covered.)

Many responded with vehemence that indeed Jews should continue to wear their kippahs. Here, Chief Rabbi David Lau said that the answer was for Jews to come to Israel, but even if Jews remained elsewhere they should “Keep wearing it proudly, as the kippah is a Jewish symbol.” 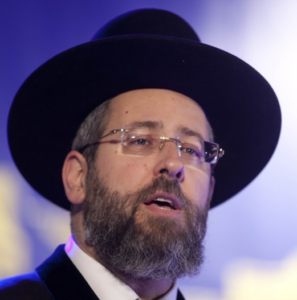 Rabbi of the Berlin Jewish community Yehuda Teichtal lent his support to Rabbi Lau, saying, “Hiding and disavowing one’s Jewish identity is not the solution.

“We should keep walking as proud Jews while simultaneously doing everything to fight anti-Semitism.”
~~~~~~~~~~
And that, of course, is what makes this a big story:  the growth of anti-Semitism in Europe – and the need to combat it vigorously.

On Wednesday, a “kippah” rally was held in Berlin, attended by some 2,000 people, many (most?) not Jewish, wearing kippahs in solidarity with the Jewish community. 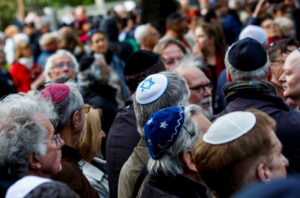 Heartening.  But this does not begin to address the deeper problem.

Germany now has its first anti-Semitism commissioner.  Recently he said: “There has always been anti-Semitism in Germany, but it is more blatant now, more aggressive.”  It is widely acknowledged that, while the rise of far right wing parties contributes to this, the problem has been exacerbated by the presence of Muslim migrants from countries with deep-rooted hatred of Jews. 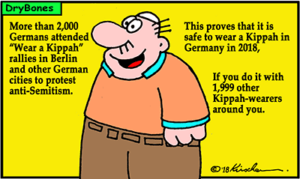 Mike Pompeo, former CIA director, has now been confirmed as US Secretary of State.

He will be stopping in Israel during his first trip abroad as secretary, and I anticipate good things.
~~~~~~~~~~
There is other very good news emanating from the US State Department, as well.  In previous “Country Reports on Human Rights Practices,” issued annually by State, one section was referred to as “Israel and the Occupied Territories.”  In the report just released, which covers 2017, this has been changed to “Israel, Golan Heights, West Bank, and Gaza.”

We attribute this change to US Ambassador to Israel, David Friedman, who urged the State Department to end its use of the term “occupied” with regard to Judea, Samaria, and Jerusalem. 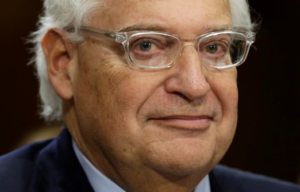