From Israel: Rejoice in the Miracle

The Land of Israel is the sacred inheritance of the Jewish People.  That we have been able to return after 2,000 years of exile is a modern day miracle.

I see with clarity the protection of Heaven hovering over us.  I see it in the way we thrive as a nation: In a mere 70 years, we have blossomed far beyond all expectations, making the land green and developing in a dozen spheres.  We stand strong – an island of stability in a part of the world that is filled with chaos.

Israel is the only Jewish state in the world.  We function on Jewish time, and with a Jewish ethos.

That ethos is marked by a dedication to reaching out to others in times of trouble, and an eagerness to share our innovations.  The breadth of the ways in which we provide assistance is enormous, ranging from instruction in drip irrigation in order to enhance agricultural yields in poverty-stricken third world villages; to teaching circumcision in African countries to counter AIDs; providing medical assistance to wounded Syrian children; and setting up field hospitals when natural disasters strike.

We are, truly, a light unto the nations.

Our people have returned to Israel from over 70 nations, and so our population is exceptionally diverse and our culture vibrant.  Interactions can be fractious, as we learn to become one once again, but they are filled with energy, and, in the end, a sense of family bonding.  “Only in Israel” stories of people reaching out with kindness are common.

Our social relationships are marked by informality and a democratic spirit – it is acceptable to challenge authority and the status quo.  In addition, our culture encourages asking of questions: the traditional mode by which Jewish texts have always been studied has honed skills that now make us uniquely adept at problem solving. Taken together, these cultural inclinations are at the heart of our singular ability to innovate.

The resilience of Israelis, their determination to choose life, even in the face of great hardship – to not only continue but to live with purpose – is awe-inspiring.

Israel has been ranked as the 11th happiest nation in the world.  This is so in spite of our having to contend with such matters as genocidal calls for our destruction.

It is nothing short of amazing.

I believe our happiness derives from a deep sense of meaning, and of connectedness – the feeling of being part of something larger than oneself.

Israelis have the highest birthrate in the Western world, and a significantly higher birthrate than those countries that are ranked in the top 10 for happiness. Our birthrate is 3.11 children per woman, compared with the OECD average of 1.7.

What is more, Israel has a lower suicide rate than those top 10 countries (except: in Denmark statistics are lacking).

Wow!  What an expression of hope and faith in the future.

Not incidentally, Israelis know how to say, “Thanks to God.” 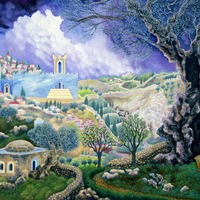 I have gone out to a main street to wait for the siren to sound.  At 8:00 PM the shrill cry comes and I stop with everyone else – pedestrians and drivers – and for two minutes stand still.

It is Tuesday evening, and Yom Hazikaron, Israeli Memorial Day, has begun — set aside to honor those who have died over the years fighting to protect Israel, and those who have been murdered by terrorists: we have lost 23,646 fighting and 3,134 to terror.

It is a day of national mourning.  Flags are at half-mast.  All restaurants and recreational places are shut at night.  We are a small country, a family, and everyone is touched.
~~~~~~~~~~
The main ceremony is at the Kotel. 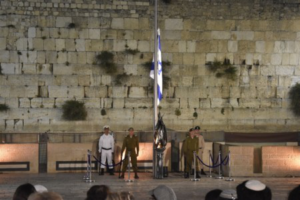 But other ceremonies are held at various locations around the country.

The one in Gush Etzion marks the special history of that area. On my website, under videos – https://www.arlenefromisrael.info/videos/ – there is a section on historic videos, with one about the heroes of Kfar Etzion that tells the story of their sacrifice.

A ceremony at Ammunition Hill in Jerusalem is held for lone soldiers who have lost their lives in battle.  In the main, these are young people who came to Israel from abroad, by themselves, eager to serve Israel.  Some made the ultimate sacrifice.
~~~~~~~~~~
The intensity of this day, the poignancy, is born of a single painful recognition:  If these brave and dear young soldiers had not been willing to risk their lives in service, there would be no Israel.

In the most real and immediate way, we owe what we are to their sacrifice. 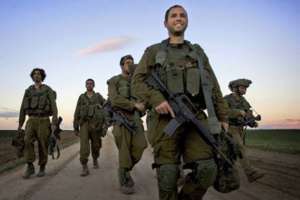 ~~~~~~~~~~
During the ceremonies at the Kotel, President Ruby Rivlin spoke emotionally about our nation’s debt to those who gave their lives (emphasis added):

“…I want to say how sorry I am to convey the sadness of an entire nation. That the decree of life of this nation requires losing the best – losing your loved ones.

“…We wish to ease your broken hearts.

“We owe a lifetime’s debt to all the houses on whose door knocked bereavement — who granted us the right to blossom here as a free people in this land.” 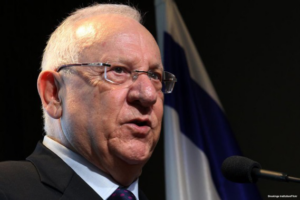 ~~~~~~~~~~
In the morning, another siren goes off:  The main thrust of the day is visitation at the graves of loved ones.

All of the nation’s cemeteries — starting with the National Military Cemetery at Har Herzl in Jerusalem — are crowded with visitors. 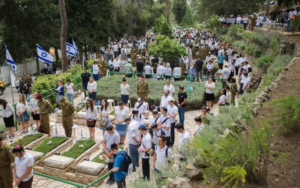 A couple of amazing things happen: The IDF sends out soldiers to be present amongst the families. 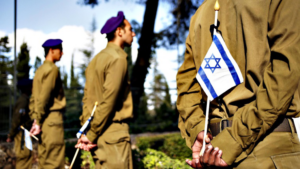 And deceased soldiers who have no families are provided with visitors, because their memories should also be honored.  There is an organization that furnishes volunteers with names and biographical information about the deceased, along with the location of their graves.

Particularly moving is the situation of survivors of the Shoah, who, having lost everyone, came here by themselves eager to fight for the nascent Jewish State.  If they fell in battle, they had no family to mourn them.  But even now, 70 years later, there are young Israelis who will learn about who they are and visit their graves. 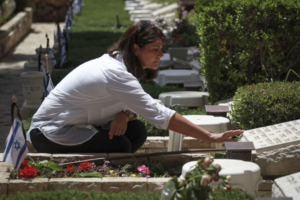 ~~~~~~~~~~
There are also ceremonies and events to remember those who died in terror attacks. I share here a short video of the young girl Reut Solomon, reading a letter to her father, Elad Solomon, who was murdered in the terrorist attack in Neve Tzuf last July.  This was part of an event at the Knesset.  She speaks in Hebrew, and the English is provided below.  In any event, you don’t need words to comprehend the emotions. 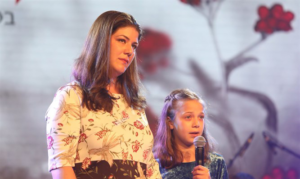 ~~~~~~~~~~
Twenty-four hours after that first siren, there is a third, and – POOF! – just like that, the mourning is over and a day of joyous celebration has begun – Yom Ha’Atzmaut, Independence Day.

This year is our 70th year of independence.

Several commentators have noted that 70 is a number of great significance.  See:

http://www.jpost.com/Opinion/UNTO-THE-NATIONS-Who-knows-70-I-know-70-550111
~~~~~~~~~~
I used to be very bewildered by this transition within a moment’s time from mourning to joyous celebration.  It seemed too sudden.

It is very Jewish: accepting moments of joy and sorrow side-by-side.  This is how life is. Except here it is intensified.

And now, the logic of it has come home to me:  We would do the memories of those who gave their lives for the State a terrible dishonor, if we did not first recognize them before celebrating the founding of the State.  But after mourning them, we must rush to rejoice in the State’s founding – otherwise we would be slighting the essential meaning of their sacrifices.  It is of one piece: When we celebrate, we recognize how much followed from what they gave.
~~~~~~~~~~ 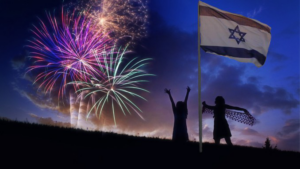 Officially, the transition is marked by ceremonies at Har Herzl.  Twelve torches are lit, for the twelve tribes of the Children of Israel, and there is a program of celebration.

Many of us begin with Ma’ariv, evening prayers, including the singing of Hallel: a collection of psalms of praise traditionally done for the festivals and other special days.  It includes the words, “This is the day that God has made”: for me, a recognition of the miracle.

There are town squares where dancing is done into the night, and locations where there are fireworks.  Because it is Israel’s 70th, there are more events than usual.
~~~~~~~~~~
Here I will simply mention that an attempted bombing of significant proportions was foiled when an Arab truck carrying supplies intended for Jewish communities in the Shomron near the Green Line was found to be carry explosives.  This was discovered just before the beginning of Yom Ha’atzmaut.

There will be more to write about this issue after the chag.
~~~~~~~~~~
As we celebrate, we are mindful of the hard times that may yet be coming, and the need to be forever vigilant.

But we are strong, and we will face the challenges, with the help of God.

On Yom HaShoah I provided a video of 6,000 people singing, done by Koolulam.  Here is another wonderful Koolulam video for Yom Ha’Atzmaut.

This time 12,000 people sing Nomi Shemer’s magnificent “Al Kol Eleh: Al haDevash v’al haOketz” – On all these – on the bitter and the sweet.

The song is a prayer:

“Over all of these, dear Lord, grant a blessing…

“Please do not uproot what has been planted,

“Do not forget our hopes and dreams,

“Lead me home and I shall return,

“To this wonderful land.”