From Israel: Outrage, Once Again!

I was planning to focus on a matter of concessions our government is apparently planning to make.  But that has been relegated now to a position below.  For a terror attack that takes Jewish life must be the first focus of attention.

On Friday, there was a multi-prong terrorist attack in Jerusalem.

At one site, near the Damascus Gate, Border Police Office Hadas Malka, 23, was stabbed. After having attempted to fight the terrorist, she succumbed to her wounds at the hospital. 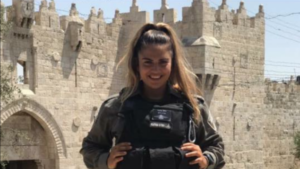 She was buried Saturday night; grieving friends described her as very special.  She is survived by her parents and five siblings.

Not far away, at Zedekiah’s Cave, two other terrorists, armed with a knife and a gun, attacked.  Two victims were moderately wounded and two lightly.

All three terrorists were killed.

Murder of innocent Jews evokes one sort of outrage, riddled with pain and sadness, but there is another sort as well.  A kind of fury that is part of this larger picture:

Mahmoud Abbas’s Fatah party on Friday night referred to the killing of the terrorists as an “execution” and a “war crime.” “Israel continues its policy of escalation.”

What is more, Abbas ordered a full military funeral for the three terrorists.

Blows the mind.  Even his pretense of being a “partner for peace” is gone here.

Those bodies should not have been returned. There was a Security Cabinet decision on this some while ago.

A statement from Netanyahu’s office on Saturday said:

The Prime Minister demands that the Palestinian Authority condemn the attack and expects the international community to do so too.”

It is possible that in a couple of days Abbas will release a mealy-mouthed half condemnation.

If you are an American citizen, I urge you to write to President Trump.

Speak respectfully and keep it short.

Briefly share the information above about the behavior of Fatah and Abbas, along with the related URLs.

Let him know that it is no more than a delusion: the notion that Abbas is moderating and can play a constructive role in advancing peace.  Say that whatever his good intentions – his desire for a peace accord, a disservice is done to Israel when Mahmoud Abbas is treated as a party to be trusted.

Now, about concern regarding concessions… I will share what I have, what I had intended to write. But I speculate (perhaps hope) that there may be changes in Netanyahu’s readiness to make concessions in light of what has happened in the last couple of days.  That would be most appropriate.

I’ve been writing about the rumors that some of Area C in Judea and Samaria, which is under full Israeli control, was going to be turned into Area B, under PA civilian control, for Arab building.  But I found myself unable to secure any confirmation of these rumors. Until the middle of last week.

That’s when news broke that indeed did confirm what had been suggested in those rumors:

Permits were going to be granted for 14,000 new housing units, which would house up to 50,000 people, to be built in the Arab city of Qalqilya, doubling the size of the city. 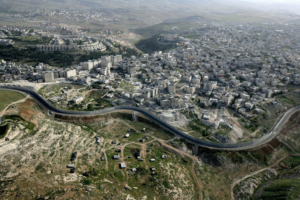 Qalqilya is in Area B, but the expansion would bring it into Area C.

There are multiple reasons to object to this plan, including that:

[] Land that was intended for Israeli growth should not be turned over to the PA for Arab growth.

[] Allowing the PA a foothold in Area C enhances their plans for a de facto state.

[] The plan of 14,000 units for Arabs represents many times the number of units planned for Jews. This inequity enrages the leaders of Judea and Samaria.

See this article about anger that the prime minister reneged on a pledge to build in Beit El:

[] Qalqilya has a reputation as a terrorist stronghold and there have been numerous incidents at the Qalqilya checkpoint.

Thus there is particular concern that the proposed construction would bring Qalqilya very close to the Jewish community of Tzofim.

Is this construction so “important,” for some totally enigmatic reason, that it is valid to dispense with the regulation?

[] There is a deep concern that this plan was pushed through without adequate serious discussion on its ramifications by the full cabinet.

Yossi Dagan, head of the Samaria Regional Council, in responding to this information, asked (emphasis added):

“Have we gone completely mad?” 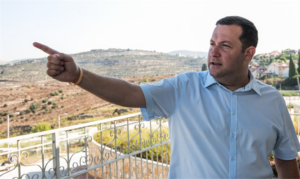 So, we must ask the question: What is going on here?

What is fueling this? And precisely what does our prime minister think we owe a terror-supporting, duplicitous PA?

Other questions: how much is Netanyahu advancing this on his own initiative, because in the end it sits well with him, and how much because he is subject to intense pressure that he does not have the backbone to resist?

When Obama was president, it was said that Netanyahu was afraid to cross him because there was no telling what he would do to damage Israel if angered.

But now the president of the US is seen as a friend. There is some reason to question whether he is a true friend, although he is most certainly not an enemy, Obama-style. Is Netanyahu now afraid to cross him because he values that perceived friendship?

There has much talk about the fact that Trump is, above all else, a “deal-maker,” and that his prime concern is making that “deal.”  If this is so, it means he would not have a problem putting Israel in a tough position, for the sake of “winning.”

Jason Greenblatt is Trump’s envoy for promoting negotiations.  As he studied at the yeshiva at Har Etzion some years ago, assumptions were made about his perspective on Israel. 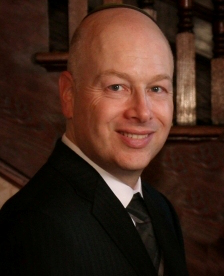 We have already been learning that our initial perceptions were off, regarding this traditionally religious man who is working towards “two states.”

But I want to thank Susie Dym, who shared a link to an article about Greenblatt, which ran in the Forward before the election.  It included this direct quote (emphasis added):

“If you take out the emotional part of it and the historical part of it, it is a business transaction.  Land is going to be negotiated…”

Boy, does he not get it.  More colloquially: Oi Vey. But this is said by some to be Trump’s attitude.

There seems no question but that the Trump administration is pressuring our prime minister big time for the sake of that “business transaction.”

It is possible that the timing of the announcement of the Qalqilya expansion is connected to Greenblatt’s imminent arrival. This is how things tend to work.

Trump is not anti-Israel.  He’s trying to be “even handed.”  To his credit, he is leaning on Abbas as well.

The problem is that Netanyahu bends, whereas Abbas merely pretends to bend (sometimes) – and until now at least seems to have convinced Trump’s naïve people that he has done so.

If Netanyahu imagines that he is compelled to make “gestures,” he should at least make only ones that are revocable.  Giving land for Arab housing is irrevocable, once the building is done.  And when there is regret later, because the gesture will have been for nothing, there is no way to undo the situation.

There are a number of government ministers who are decidedly unhappy with what is going on – Ze’ev Elkin, Naftali Bennett, Yariv Levin, Tzipi Hotovely, etc.

In light of the current political situation, I will not comment further on this now.  Rather let us wait and see how this evolves.

It is even possible – perhaps reasonable to expect – that if Greenblatt does come soon, he will have been somewhat soured on Abbas.  Or perhaps his trip, aimed at bringing “peace,” will be delayed.

There will be other good news to share next posting…