Which is to say: it hurts!

In my last post I focused on news of two terror attacks in recent days, and I had hoped to move on from there to other matters.  But it is not to be.

When I wrote yesterday, I reported on a terror attack in the Old City, near the Kotel:  An Israeli man, 32 years old, had been stabbed in the chest with a huge knife and was taken to the hospital in critical condition.

Not long after I put out my posting I learned that this man had died. 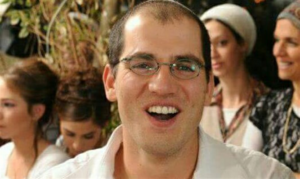 His name was Adiel Kolman, may his memory be for a blessing. He was a resident of Kochav Hashahar in the Binyamin region of the Shomron, and he is survived by a wife and four children.

Another young widow. Four more young orphans, the oldest of whom is only nine.
~~~~~~~~~~
Adiel, who aspired to be a teacher, devoted himself for years to the archeological excavations of Ir David (City of David). His deeply Zionistic convictions kept him attached to this work. “He was always smiling and full of joy, said his staff manager.”

http://www.israelnationalnews.com/News/News.aspx/243342
~~~~~~~~~~
Many hundreds attended his funeral in Kochav Hashahar today.

“’We would like more. Everything good we want more. To enjoy your pleasantness — more. But no. God gives and God takes away. This was your time,’ said Adiel’s mother, Yael.

“’But the children will miss you,’ she said.

“’The children!’ his bereaved mother screamed a second time, breaking down into tears along with many in the crowd.” (Emphasis added) 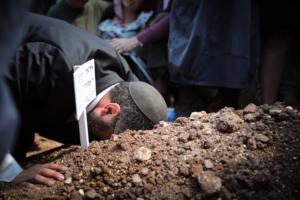 Amen, amen.
~~~~~~~~~~
Kolman’s murderer, 28, was a Palestinian Arab from Shechem (Nablus) in the Shomron. He was married and had two children; he was in Israel legally, as he had a work permit.

One has to ask, what sort of hatred, what sort of distorted perspective, lead him to cut his life short when he had a family and a means of earning money. Was it just the promise of the funds to support his family that would be achieved with his “martyrdom”?  Or was it also ideological – the promise of achieving the ultimate glory of being a martyr?

Whatever, it is sick and obscenely ugly.
~~~~~~~~~~
How very different we Jews are.  You see above how Adiel’s mother spoke at his funeral.  And see here what the parents of Netanel Kahalani, who was killed in the car-ramming attack last week, had to say (emphasis added).

From his father, Danny, at the funeral: “I loved you so much, and I lost you in a second. Twenty years is nothing, but I am thankful for them.”

And from his mother, Naomi, who spoke to reporters before the funeral: “Netanel was a gift. I thank God for giving me this child. He had a heart of gold, a pure soul. He was an incredible child.”

At his funeral, no words of bitterness or thoughts of revenge. Rather, gratitude, that he had been their son.

My friends, I have seen this again and again, and I am always in awe.
~~~~~~~~~~
This then leads me back to something I had wanted to write about before news of the terror attacks intervened.

The time comes now for the Israel Prizes in various subjects to be awarded by the government.  I may return to speak about some of the other recipients later, but I especially want to mention Miriam Peretz who is going to be receiving the Israel Prize for Lifetime Achievement for strengthening the Jewish-Israeli spirit.

The award was announced by Education Minister Naftali Bennett, who went to Miriam’s house to tell her of the award.  She wept when he told her. Wrote Bennett (emphasis added):

“Miriam Peretz, ‘the mother of the sons’, who lost Uriel and Eliraz, has dedicated her life to educational activities.

“Miriam did not choose the harsh circumstances of her life, but chose to live and revive an entire people. She is the mother of us all. Mazal tov.” 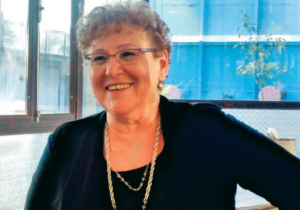 ~~~~~~~~~~
I have felt for a long time that Miriam is an astounding person who epitomizes the very best of Israel.  When we have such people among us, we know we will win.

Please take the time to see this video of a speech she gave a while ago and you will understand.

https://www.youtube.com/watch?v=3WWdqhg_t_I
~~~~~~~~~~
Such is the faith and the optimism of the Jewish people that we are assessed as the 11th happiest nation in the world.  In spite of wars, and terror and the dangers at our border. We live with gratitude and hope.

I think it is that same faith and optimism and hope that leads us to have the highest birthrate in the Western world. Israelis have 3.11 children per woman, while in other (OECD) countries, total fertility rates in recent years have averaged less than 2.1.

“An IDF parole board ruled Monday that former IDF soldier Elor Azariya will be freed after serving two-thirds of his 14-month prison sentence, enabling him to leave the army’s Prison 4 facility on the 10th of May.”

I wish he had been released, as he requested, after half his term, which would have brought him home before Pesach.  Especially do I feel this as I don’t believe he should have been in prison at all. But this is good.  Soon it will be behind him. 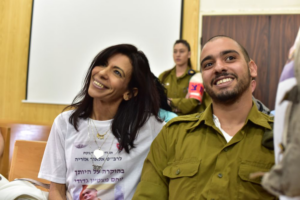