From Israel: On Several Fronts

These are hardly quiet times, and there is much to attend to.  The trick is to focus on those issues that have genuine import, and to pass over the shtuyote (the nonsense) that masquerades as news.  Otherwise we drown in a barrage of “events,” and run the risk of paying insufficient attention to what really matters.

The issue with the greatest import, in my opinion, is the threat posed to Israel by Iran, as it seeks to increase its presence in Lebanon and Syria via its proxy Hezbollah and a mix of other forces, including Shiite militia, troops loyal to Assad and Revolutionary Guard.

There are two things happening.  The first is the attempt to establish a land route:

“Thousands of Iranian-backed fighters in Syria’s central desert region are advancing east, bringing Tehran closer to its goal of securing a corridor from its border, through Iraq and all the way to the Mediterranean and providing it unhindered land access to its allies in Syria and Lebanon for the first time. (Emphasis added)

“The land-route…would facilitate movement of Iranian-backed fighters between Iran, Iraq, Syria and Lebanon as well as the flow of weapons to Damascus and Lebanon’s Hezbollah, Iran’s main proxy group.” 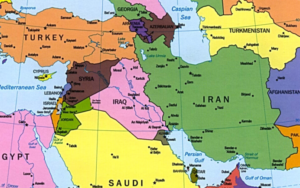 And then there is the attempt by Syria to establish itself solidly in Syria.

The weakening of ISIS is a factor in what is happening: as ISIS has been driven back an opportunity has risen for Iran to move in.  Ceasefire arrangements in the Syrian civil war, and the growing strength of Assad, have provided Iran with opportunities to advance, as well.  When various forces were constantly at each other’s throats, there was little time and energy for focusing on Israel, but that is now changing.

Israeli intelligence has information on Iran’s attempts to establish bases in Syria and Lebanon near Israel’s border.  They would serve as launching pads for attacks on Israel and as sites for the construction and consolidation of weaponry.

Make no mistake about it: However vile ISIS is with regard to its obscene tactics, Iran is by far the bigger threat.  Allying with Iran in an effort to eradicate ISIS is a major mistake.

With regard to this situation, Prime Minister Netanyahu has raised his voice in various contexts recently.

On August 23, Netanyahu traveled to the Russian Black Sea resort of Sochi to meet with President Vladimir Putin.  He brought with him Mossad chief Yossi Cohen, who reportedly provided Putin with detailed secret intelligence on Iran’s involvement in Syria. 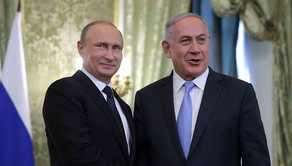 Herb Keinon of the JPost had this to say about the meeting (emphasis added):

“Russian President Vladimir Putin knows full well that Israel is adamantly opposed to any post-civil war arrangement in Syria that would leave Iranian military forces in place.  He doesn’t need Prime Minister Binyamin Netanyahu to hop on a plane and disturb his summer holiday…to tell him.

“So why did Netanyahu go?  The objective is less to convince Putin of Israel’s position, and more to look him in the eyes and tell him squarely what Israel will do if Iran begins to entrench itself militarily in Syria.

“Israel’s message to Putin…is that Israel will act militarily.

“Netanyahu wants this to be a factor in Putin’s decision-making process.

“Because if Israel does act militarily, the question will be how does Russia respond.”

In the event that Iran attempts to build air bases, a naval port, or permanent army bases in Syria, Israel would take military action as precisely as possible, so as not to endanger Russian forces.

A similar high intelligence briefing and report on Israeli intentions had been delivered by Yossi Cohen to the Americans a week earlier. 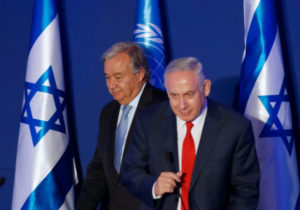 And once again, Netanyahu was forceful in laying out his concerns:

“Iran is busy turning Syria into a base of military entrenchment and it wants to use Syria and Lebanon as war fronts [in] its declared goal to eradicate Israel,” he told the UN chief.

“It is our right not to allow this noose to tighten around Israel.”

What Netanyahu wanted to do here is put forth the Israeli case before it was necessary to take action in Syria or Lebanon, for it is a reasonably certain bet that such action would be followed by condemnation in the Security Council of the UN.

This move on Netanyahu’s part was appropriate: Declaring Israel’s intentions and absolute right to self-defense is important.  However, while Putin is a key player in Syria, Gutteres’s ability to affect the UN response is limited.

And, it should be noted, while he is considered more favorably inclined towards Israel than his predecessors, he has made it clear that he intends to maintain “impartiality.” In fact, he went to Ramallah the day after meeting with Netanyahu and declared his unswerving support for two states.  There are no alternative solutions, he declared.

Key among these was UN Security Resolution 1701, which established terms for the end of the Second Lebanon War in 2006. At that time, UNIFIL (United Nations Interim Force in Lebanon) was established and charged with preventing Hezbollah from re-establishing and re-arming in the south of Lebanon (south of the Litani River). But UNIFIL made a mockery of its mandate.  Netanyahu pointed out that UNIFIL has never reported even one of the “tens of thousands of weapons smuggling into Lebanon for Hezbollah, contrary to 1701.” (Emphasis added)

Gutteres’s response was that he “will do everything in his capacity to make sure UNIFIL fulfills its mandate.”

But UNFIL’s mandate is pathetically weak: It was given little unilateral authority, but instead has been required to operate under the umbrella of the Lebanese Army, which is thoroughly allied with (if, at this point, not totally synonymous with) Hezbollah.

Yet, even within the constraints of its limited capacity to operate, UNIFIL has demonstrated a reluctance to do its job.

If you came as part of an international force into Lebanon, would you be eager to report Hezbollah activity in the area, knowing that Hezbollah operatives were all about? 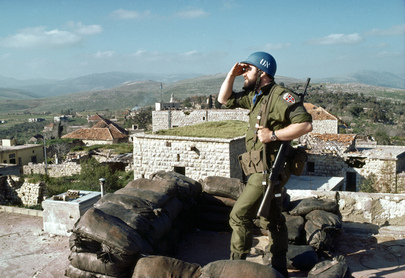 Now the mandate for UNIFIL is up for renewal, and both Israel and the US are pushing for it to be strengthened.

It is best not to have any expectations here (see following), but appropriate none-the-less that the issue was raised.

After US Ambassador to the UN Nicki Haley (bless her!) condemned Maj. Gen. Michael Beary, commander of UNIFL, for “turning a blind eye” to the smuggling of weapons to Hezbollah, Beary countered that his force had no evidence of illegal activity in the region, and “if there was a large cache of weapons, we would know about it.” (Emphasis added)

Israeli intelligence has identified some 100,000 to 150,000 rockets amassed by Hezbollah in Lebanon since the 2006 war, including some Iranian missiles – these weapons were smuggled in.

Almost all of the rockets are hidden in residential areas, which our intelligence has identified.

Israel has an extensive defensive shield in place against rockets.  What is more, we have made it clear that our response, if attacked, would be immediate and overwhelming.

While Netanyahu was meeting with Gutteres, Yahya Sinwar – a military leader in the Izz ad-Din al-Qassam Brigades in Gaza and Hamas prime minister since February – had his own announcement: Hamas relations with Iran, which had undergone a rift because of the refusal of Hamas to support Assad in Syria’s civil war, has been restored.

“Relations with Iran are excellent and Iran is the largest supporter…with money and arms.

“The relationship today is…returning to what it was in the old days.”

On the “peace negotiations” front, I have precious little to offer, in part because most of the news has come from Palestinian Arab sources, and is unconfirmed by either Israel or the US.

What appears to be the case is that the US negotiating team asked Abbas to refrain from challenging Israel in international forums for a period of some months, in order to give the US time – reportedly three to four months – to develop a proposal for advancing peace.

I can hardly wait.

Lest you think there is no good news, let me assure that there is:

The Kurds of Iraq are heading towards independence: A binding independence referendum for Iraqi Kurdistan has been scheduled to be held on 25 September 2017, and it is almost a certainty that a vote for independence will carry the day.

The Kurds are pro-West and pro-Israel. They are a true people, with a distinct culture, have prepared diligently, and deserve their independence.

Masoud Barzani (pictured), the president of the Iraqi Kurdistan Regional Government (KRG), says he hopes for peaceful negotiations with Iraq, in order to achieve that independence, following the referendum. The Kurds, in the north of Iraq, already constitute an autonomous region with Erbil as its capital. 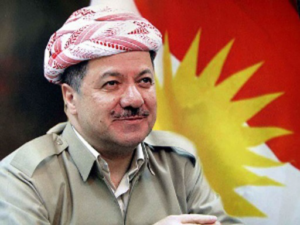 “At a rally in the German city of Cologne on Saturday, attended by some 20,000 Kurds from different parts of the world expressing support for an independent Kurdistan in northern Iraq, the Israeli flag was raised in solidarity with the Jewish state.

“One of the flags read ‘Thank you for your support’ referring to Prime Minister Benjamin Netanyahu’s comment earlier this month when…the Prime Minister told a delegation of US Congressmen that the Kurds are ‘brave, pro-Western people who share our values.’

“Jahwar Slemani from Iraqi Kurdistan told The Israel Project that he brought an Israeli flag to the rally to express his solidarity with Israel and the Jewish people. ‘Kurds and Jews, we have the same enemies,’ he said. ‘Jews know what it takes to survive as a minority in the Middle East. We have to stick together’…

“’This is our 1948 moment,’ he said. ‘and I want an independent Kurdistan to have good relations with Israel. Together we can fight the terrorists.’”

David Govrin, Israel’s Ambassador to Egypt, and his small staff have returned to Egypt after an eight-month hiatus because of unspecified security threats.  The ambassador and his staff will work from his suburban Cairo home.

At a celebration of 50 years of Jewish communities in Samaria on Monday, Prime Minister Netanyahu addressed the crowd:

“We are here to stay forever. There will be no more uprooting of settlements in the land of Israel.

“This is the inheritance of our ancestors. This is our land.”

Let us hope (that there will be no more uprooting).

And then this, which is certainly a step in the right direction:

Defense Minister Avigdor Lieberman has just announced that the Jewish Community of Hevron, numbering about 1,000, will no longer be under the auspices of the adjacent Kiryat Arba Council.

It will be registered with the Interior Ministry and the Civil Administration as its own separate legal community.

The picture below is of the annual Hevron march. 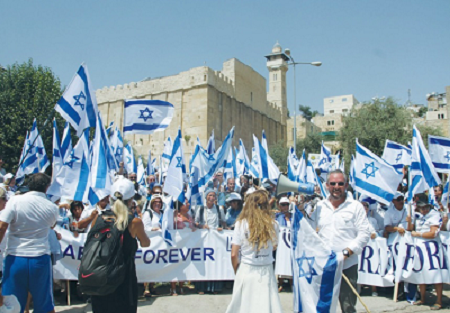 This upgrade is particularly fitting as UNESCO recently declared the old town of Hevron, which is where the Jews live, and the Machpela to be registered on the World Heritage List as part of the State of Palestine.