Most of you are familiar with the saying, “The definition of insanity is doing the same thing over and over and expecting different results.”  This is broadly attributed to Albert Einstein.  While I find no verification of this, it really does not matter, for the point is well taken.

Following here we see a stunning example of this thinking.

Egypt and the UN are in the process of initiating a “new” diplomatic effort in order to prevent a major war in Gaza.  It entails humanitarian relief for Gaza, establishment of unity between Hamas and Fatah (the major party of the PA) so that the PA would again operate in Gaza, and a promise by Hamas to refrain from terrorism.

Is this not a breathtakingly innovative approach?

~~~~~~~~~~
I might not have even mentioned this if it were not for something else that happened last Friday:

According to a Channel 10 report that was carried by several news sources, Prime Minister Netanyahu told senior cabinet ministers about “a new initiative” being launched for a diplomatic solution in the Gaza Strip.

Netanyahu was reported to have said that Israel would be cooperating with this effort, which has made considerable progress.

Considerable progress??
~~~~~~~~~~
This rather threw me because of the palpable insanity of the “diplomatic effort” with which our government is apparently about to cooperate.  But even more so because of what Defense Minister Lieberman had said just over a week ago, when he declared that Israel would not continue to tolerate fires, kites and border clashes:

Israel had “done everything in order to prevent a war in the Gaza Strip.

“Anything that happens going forward in the Gaza Strip is the sole responsibility of the Hamas leadership.”
~~~~~~~~~~
Since he made this statement – warning that further violence would result in a strong Israeli reaction – we see that:

1) The situation at the border fence has not diminished at all.  This past Friday some 7,000 participated in riots; there were attempts to throw grenades, pipe bombs and Molotov cocktails at the IDF.

2) We still must contend with multiple fires caused by incendiary devices. On Saturday a fire broke out at Sapir College in Sderot.  On Monday, for the first time, one device (pictured) reached Be’ersheva, which is 40 kilometers (25 miles) away; it fell near Soroka Hospital. 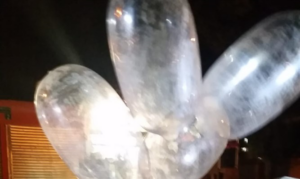 On that same day, 14 fires were started.

http://www.israelnationalnews.com/News/News.aspx/249787
~~~~~~~~~~
But it seems our response is going to be cooperation on this “diplomatic effort” rather than a strengthening of our stance.
~~~~~~~~~~
There have been reports – vigorously denied by the prime minister’s office – that Lieberman and Netanyahu have been at odds regarding how tough a stand to take against Hamas.  And so it is possible that Lieberman (left, below) meant what he said, above, but that he was restrained. 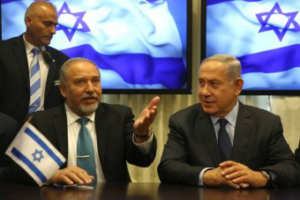 Were Israel to have started a military operation in Gaza immediately after the announcement of the “new initiative,” there would have been an international uproar: we would have been painted as the aggressor, shunning peaceful options in favor of military action and ruining what might have been a successful initiative as it was just getting started.

I want to clarify that, in light of all that has transpired, we would have had a very legitimate right to move quickly to a military option, international uproar be damned.

But this is most definitely not our prime minister’s MO — especially as Egyptian President el-Sisi made an appeal directly to the Israeli people on Sunday urging us “to seize a great opportunity for peace.” 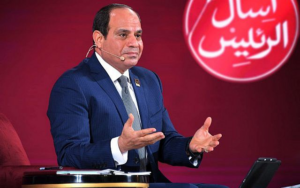 We work with el-Sisi constructively in a variety of contexts, for example, with regard to jihadists in the Sinai.  Should Netanyahu have figuratively spit in his eye by publicly undercutting his initiative?

Has he, perhaps, deemed it the more prudent course to offer cooperation and then let it play itself out over a period of days before taking action that needs to be taken?  Perhaps he sees his readiness to cooperate as providing us with the high ground when we do advance a military option.

This is purely my speculation, because to me very little else makes sense.  I do not think that Netanyahu remotely believes this initiative will succeed.
~~~~~~~~~~
On Monday, journalist Khaled Abu Toameh reported on the arrival of Fatah officials in Cairo for talks on the Egyptian initiative (emphasis added).

“The PA insists that Hamas hand over full control over the Gaza Strip to the PA government, including security responsibilities. Hamas, for its part, has repeatedly rejected demands to disarm or allow the PA to deploy its security forces in the coastal enclave.”

United Nations Special Coordinator for the Middle East Peace Process Nickolay Mladenov met with Netanyahu in recent days.  (Was this meeting what prompted Netanyahu’s statement about “progress”?)  On Sunday Mladenov was also in Cairo.

“The London-based Asharq al-Awsat newspaper reported on Sunday that Mladenov’s efforts were aimed at securing a long-term ceasefire between Hamas and Israel and ending the Hamas-Fatah power struggle.

“Palestinian sources told the paper that this was the last chance to end tensions along the border between the Gaza Strip and Israel. If Mladenov’s mission fails, it would accelerate a major confrontation between Hamas and Israel even though the two parties are not interested in having one, the sources said…

“’There are real fears that the current diplomatic efforts to avoid an all-out military confrontation could fail,’ the unnamed Palestinian sources told the paper. ‘There is still no real progress, and this has created a pessimistic climate.’”

https://www.jpost.com/Arab-Israeli-Conflict/Fatah-officials-UN-envoy-discuss-Gaza-crisis-in-Cairo-563709
~~~~~~~~~~
“Palestinian sources” cited by Abu Toameh may have said that neither side is interested in a major confrontation, but recently I offered an assessment by an analyst who indicated that the military wing of Hamas indeed does seek war.

On Tuesday, Abu Toameh had a follow-up article describing the Egyptian summons to Hamas to Cairo for reconciliation talks (emphasis added):

“Mahmoud al-Aloul, the deputy head of Fatah, said on Monday that there was ‘nothing new’ with regards to the issue of the controversy with Hamas…He described the current Egyptian mediation efforts as an attempt to ‘move the still water’ and ‘break the stalemate.’”

There simply is not going to be a genuine reconciliation between Hamas and Fatah, with a unity government in Gaza. (Not that this would be constructive in any event.) The rivalry and animosity between the two groups are enormous, and Hamas has absolutely no intention of disarming or turning its troops or arms cache over to Fatah.

As to a “long term ceasefire” between Israel and Hamas, this is a possibility, but a dangerous business.  We’ve been there and done that and look where we are now.

A “ceasefire” from the Hamas perspective is a temporary cessation of hostilities, not a permanent cessation on which a peace treaty might be built.  This cessation, known as a hudna, allows for time to strengthen militarily for the next round; this approach is sanctioned by Islam.

From the Israeli perspective this would be simply kicking the can down the road. Once again, Hamas would call the shots in terms of when to break that “ceasefire.”  And when they did, they would be stronger than they are now.
~~~~~~~~~~
Responding to the continued launching of incendiary balloons, Defense Minister Lieberman has announced the shuttering of the Kerem Shalom crossing, with no gas or oil being brought in until further notice.  (The crossing had been shuttered once before, but then was opened when there was a reduction in balloon launchings.)

In light of the unrest that continues in the north, it might be prudent for Israel to consider other, more potent, ways to ratchet up actions without initiating a full ground war.  Right now Hamas is generating the tension and we are simply responding to it, without noticeable effect. It is imperative for us to begin to control the situation – to set them off balance and make them afraid.  Selective assassination of Hamas leaders would probably be a good place to start.  These leaders advocate “martyrdom” for others, but never for themselves.

In the end there may be no choice but to initiate that war.
~~~~~~~~~~
In the north, it is quieter because Syria is close to announcing victory, having defeated the ISIS enclave in Quneitra, and moved more broadly into the area adjacent to the Golan.

But the relative quiet does not promise a stable and peaceful situation.  There are innumerable jihad factions stationed within Syria, some loyal to Assad.  There is an effort by the Syrian Kurds to secure one section of Syria as a Kurdish autonomy, something that Assad opposes.  There are Iranians embedded within the Syrian army. There has been a slaughter of Syrian Druze not far from our border (something I will likely discuss further).

Most significantly, there is the problem of Iran.

Iranian forces – functioning as Iranian forces — are not going to find their way to emplacement at Israel’s border.  Israel’s demand, expressed to the Russians, that Iran leave Syria entirely was not successful.  The Russians offered Netanyahu a plan for Iran to move back 100 kilometers from Israel’s border, which he said was insufficient.

In the end, according to Alexander Lavrentyev, President Vladimir Putin’s special envoy to Syria, Iran has pulled its weapons back 85 kilometers (53 miles) from the Golan Heights.  This is not really satisfactory to Israel, as Iran has weaponry that can travel a good deal farther then 85 kilometers.  Lavrentyev has indicated that Iranian service personnel, whom he described as advisors, may be close to Israel’s border.

The Russians maintain that Iran is needed in Syria now as part of the team that will eradicate terror forces.  The irony of this position should not be lost on anyone.
~~~~~~~~~~
Most troublesome, however, are the reports indicating that Iran will utilize its proxy Hezbollah to achieve its goal indirectly.  From Yoav Limor we have this analysis (emphasis added):

“The Iranian-backed Shiite terrorist group is already in Syria. Its operatives are fighting alongside the Syrian army and it has several hundred local villagers on its payroll, who engage in intelligence gathering.

“This was a strategic decision by Hezbollah leader Hassan Nasrallah, who wants to turn the Golan border into an active war zone with Israel.

“The first stage has already been completed, the second stage is in full swing and, unless Hezbollah is stopped, the third stage will become a reality in a few short years.

“Stopping Hezbollah in its tracks is Israel’s main challenge and doing so will become exponentially more difficult once the Syrian civil war officially ends. Until now, Israel has been able to use the chaos north of the border to eliminate any risk from that direction, but once the war ends, any use of force would have to be justified to others.

“Legitimizing Israeli operations on this front is likely to become far more complex and the risk for a security escalation will be greater.” 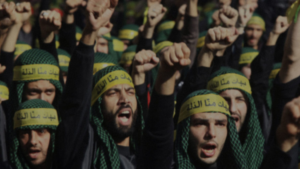