It’s a given that the political scene is rarely static.  But the present – both here and in the US – seems particularly fraught with shifts and unpredictability.  The trick is to identify what’s real and what currents flow unseen beneath the surface.

Today I want to take a look at Hamas, at Fatah, and at the relationship between the two.  There’s a whole lot of shifting going on, but much of the shift is on the surface.

For clarity, we need to start with a bit of background:

Fatah was founded in Kuwait in 1959 by Yasser Arafat and a small group of Palestinian Arabs.  It identified as a secular nationalist movement – the Movement for the National Liberation of Palestine – and became the core of the PLO, founded in 1964.

The ideological distinction between these two factions, while it remains in theory, has blurred somewhat over the years: Fatah’s secular nationalism has fused with Islamic symbolism and Hamas focuses to a greater degree on a “Palestinian state,” rather than on the Ummah (Arabic nation) more broadly.

The two groups have had a love-hate relationship for a long time. (Or, better, a like-hate relationship: the “like” generated by pragmatics.)  During the ‘90s and as late as 2000, Yasser Arafat, who was supposed to be fighting terrorism as part of the Oslo Accords, had covert agreements with Hamas.  It was a good cop-bad cop situation, with Arafat pretending clean hands while encouraging terrorism all the same. 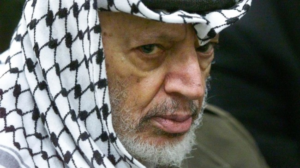 This is an excellent example of how enormously important it is to know what’s beneath the surface.

In January 2006, the PA held legislative elections in which Hamas competed for the first time. It ended up running away with the election, thereby shifting the balance of power. A unity government was established, in which Hamas’s Ismail Haniyeh (about whom more below) became prime minister.

This was short-lived: In June 2007, Hamas took over Gaza from the PA, which had controlled it as part of the Oslo Accords.  It was an ugly and violent coup, with Fatah elements not deporting themselves with any particular courage.

At that time, Yaakov Kirschen did a Dry Bones cartoon that exquisitely reflected the situation.  I think it retains enormous relevance today: 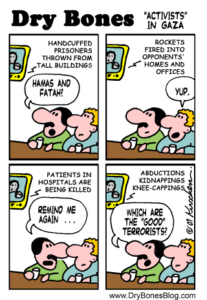 In spite of the fallings out, the rivalries over control, the differing ideologies and the varying styles of the two factions, there is one goal shared by Fatah and Hamas alike: getting rid of the “Zionist entity.” Both are terror-supporting groups. It’s just that Fatah works harder to pretend it’s not.

In the last few years, there have been stabs at “reconciliation,” with announcements of a “unity government” to be formed once again between Hamas and Fatah.  This has been an attempt to show the world that there is “one” Palestinian people, deserving of a state.  Not that there has been real unity: friction always rises to the surface. Each time there has been a falling out.

Sometimes different family members within one hamula (clan) belong to the different factions.  The hamula carries the priority in allegiance: that is, a Fatah person will not go after his clan cousin who happens to be Hamas.

Right now, Abbas is working against unity.  He is attempting to weaken Hamas in a bid to regain control of Gaza.  His goal here is to show the world that he is in control in all quarters, something he believes will enhance his status internationally.

The PA has announced it will stop paying for electricity going into Gaza, and attempt to dry up funds that go to Hamas leaders. 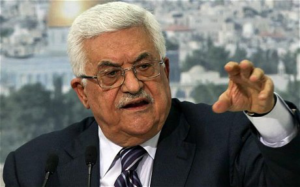 Do note please, that this individual who aspires to be leader of all of the “Palestinian people” cares not a whit how they will suffer in Gaza without sufficient electricity.

Abbas is also making like a cooperative moderate these days, playing up to President Trump.

Abbas, he said, “is a flexible person.” 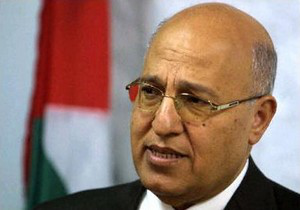 I hope and trust that my readers will not take this seriously for a moment.

What is being said here is that if Israel moves back behind the Green Line – relinquishing all of eastern Jerusalem including Har Habayit (the Temple Mount) and the Kotel, and the 3,000 year old Jewish cemetery on Har HaZeitim (Mount of Olives) – then if Israel wants to retain a small amount of land for a Jewish community beyond the Green Line, Abbas might agree if the PA were given a parcel of land equivalent in size and quality within Israel and allowed to annex that to a Palestinian state.

Hamas, for its part, is working against any notion that Abbas and his Fatah party can speak for the Palestinian Arabs:

After Abbas met with Trump and gushed enthusiastically about the new possibilities for peace, Hamas spokesperson Sami Abu Zuhri released a statement saying that Hamas categorically rejected Abbas’s words, as “all of Palestine” belongs to the Palestinian Arabs.

“No one has authorized Mahmoud Abbas to represent Palestinian people and no one is obligated to any position he’s issued.

“We reject Abbas’s statement that all final status issues are solvable, because national rights belong to all Palestinians and no one person can relinquish them.”  (Emphasis added)

At the same time, Hamas has just unveiled a document called “General Principles and Policies,” a supplement to the original charter that is supposed to moderate the Hamas positions.

And once again, I caution my readers not to be taken in by this.

Reportedly, it was hoped that this document would improve relations between Hamas and Arab nations such as Egypt.

But it’s all smoke and mirrors.

For example, the document obliquely refers to “the establishment of a fully sovereign and independent Palestinian state, with Jerusalem as its capital along the lines of 4 June 1967.”  There are those who have eagerly embraced this as a turning point in the Hamas position.

But wait!  It does not acknowledge Israel’s right to be on the other side of that border.  Nor does this statement in any way preclude the imperative to establish a larger Palestinian state.  (See further)

It refers to Islam as a “religion of peace and tolerance,” which provides a “balanced middle way and moderate spirit” for Hamas. It maintains that “Hamas rejects the persecution of any human being.” And it claims to have no hostility to Jews, only to the “Zionists” who occupy Palestine.

“Palestine, which extends from the River Jordan in the east to the Mediterranean in the west…is an integral territorial unit. It is the land and the home of the Palestinian people.

“Resisting the occupation with all means and methods is a legitimate right guaranteed by divine laws and by international norms and laws. At the heart of these lies armed resistance…”

“A real state of Palestine is a state that has been liberated. There is no alternative to a fully sovereign Palestinian State on the entire national Palestinian soil, with Jerusalem as its capital.”

It is interesting that this document also tries to tie together Hamas’s Islamist ideology with its nationalist politics:

“Palestine is an Arab Islamic land. It is a blessed sacred land that has a special place in the heart of every Arab and every Muslim.”

Ismail Haneyeh, who for many years headed Hamas in Gaza, has now been elected as chairman of the Hamas Politburo, replacing Khaled Masha’al, who held the position for 21 years.

“Over the last few years, Haniyeh confronted Palestinian Authority (PA) President Mahmoud Abbas on several different occasions, encouraged acts of terrorism even in times of ceasefire and announced victory after every battle against Israel.” 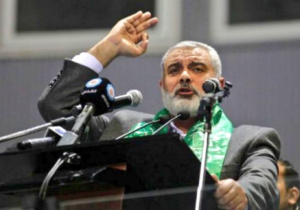 It is thought that Haniyeh might locate outside of Gaza in his new position.  Masha’al operated from Qatar for the last five years, and elsewhere before that.