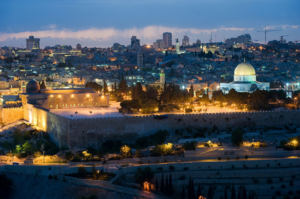 This will not be news to my readers!

President Donald Trump, in a speech delivered from the White House, has announced that the United States, in accordance with the 1995 Embassy Act (about which more below) now recognizes Jerusalem as the capital of Israel.  He has instructed the State Department to begin arrangements for establishing the US Embassy in Jerusalem. 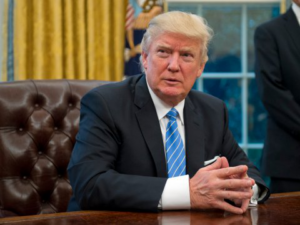 For us in Israel, and our friends elsewhere, there has never been doubt about the fact that Jerusalem, united, is our eternal capital.

But how lovely, and how important, to see the beginning of international recognition on this score.

Israel is a sovereign nation, declared the president, and as such has the right to establish its capital.

I do not believe that there is another instance internationally in which nations have refused to establish their diplomatic missions to a country in the city that the country declares to be its capital.

But now a significant turn-around.

King David made Jerusalem the capital of his united kingdom over 3,000 years ago; it is there that his son Solomon built the Temple.

From that day until this day, Jerusalem has never been the capital of any other nation.

Jerusalem was part of the Mandate for Palestine, which allocated the land for a Jewish homeland within international law.

There are those today who refer to the fact that UNGA Resolution 181 of 1947, which proposed a federation of two states in Palestine, allocated Jerusalem the status of a corpus separatum to be administered as an international city by the UN.

But that resolution is totally null and void today as the Arab world rejected it. What is more, it was only a recommendation and carried no weight in international law. Additionally, it should be noted that the UN never attended to its responsibilities with regard to Jerusalem, as spelled out in the resolution.

With the founding of modern Israel, and the War of Independence, Jordan took the eastern part of Jerusalem, occupying it illegally in an offensive action.  This area, which includes the Temple Mount, is at the very heart of Jewish heritage.  Yet he not only rendered it Judenrein, he destroyed synagogues and pillaged Jewish tombstones.

This 19-year period of Jordanian occupation is the only time in 3,000 years that the city was divided.  In point of fact there is no “East Jerusalem,” there is only Jerusalem.

Yet to this day, the Arabs have the gall to claim that eastern Jerusalem is “Arab.”  Although, when they speak of “East Jerusalem” what they actually mean is everything past the Green Line (the 1949 armistice line). This includes Gilo, which is in the south west of Jerusalem, and Ramat Shlomo (not on the map below), which is to the north. 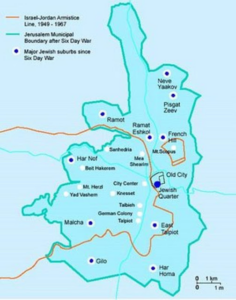 Israel reunited the city in 1967, with the Six Day War.  In 1980, the Knesset passed “Basic Law: Jerusalem, Capital of Israel.”  It states that:

It also mandates protection of Holy Places against desecration, and freedom of access to religious places sacred to various religious groups.

The Jewish quarter of the Old City has been magnificently restored. 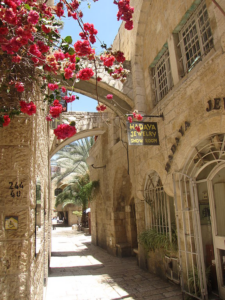 The entire question of international diplomatic relations with Israel, and establishment of embassies in Israel, has been fraught with difficulties because of Arab hostility and subsequent Palestinian Arab claims to Jerusalem.

In the early days after Israel’s founding (which saw the diplomatic recognition of 23 nations), there were 16 foreign embassies located in Jerusalem. These nations did not, however, recognize this as conferring official recognition of Jerusalem as being part of Israel.

The United States was one of those nations that chose not to place its diplomatic mission in Jerusalem.  In fact, in 1949, President Truman clearly stated that “the United States cannot support any arrangement which would purport to authorize the establishment of Israeli…sovereignty over parts of the Jerusalem area.”

Over the years, as additional nations conferred diplomatic recognition upon Israel, they chose to maintain embassies elsewhere in the country – or simply to not establish embassies in Israel at all.

In 1973, three nations removed diplomatic headquarters from Jerusalem: Ivory Coast, Zaire and Kenya, all of which subsequently severed relations with Israel following a meeting of the Non-Aligned Movement in Algiers.   All three restored relations in the 80s, establishing embassies in Tel Aviv.

In 1980, with the passing of “Basic Law: Jerusalem,” the other 13 embassies were moved out of Jerusalem. Costa Rica and El Salvador re-established their embassies in Jerusalem again in 1984, but all had left by 2006.

Today, Israel has diplomatic relations with 159 of the 193 member states of the UN as well as with the Holy See (the Vatican) and the European Union. Of these nations, 86 maintain embassies in the Tel Aviv area.

With all of this, it should be noted: The fact that foreign embassies are located outside of Jerusalem does not mean the nations boycott Jerusalem.  They present their credentials to the president of Israel, at his residence in Jerusalem.  They meet with officials in offices in Jerusalem, and attend sessions of the Knesset in Jerusalem. 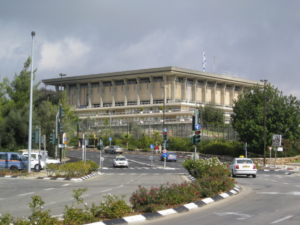 De facto, it is clear to all that Jerusalem is Israel’s capital.

As to the move of the US embassy from Tel Aviv to Jerusalem:

While US administrations have tread carefully with regard to recognition of Israeli sovereignty over Jerusalem, the sense of Congress has been quite different.

In 1995, Congress passed the Jerusalem Embassy Act, which declared that “Jerusalem should be recognized as the capital of the State of Israel” and that “the United States Embassy in Israel should be established in Jerusalem no later than May 31, 1999.”

To ensure that this happened, a penalty clause was inserted: It required that as of the fiscal year 1999, when the embassy was to have been established in Jerusalem, the funding allocated to the State Department for the upkeep and building of all U.S. embassies, consulates and other overseas State Department offices would be cut in half unless and until the United States opened an embassy there.

President Clinton, however, who was thoroughly immersed in the Oslo process, was adamantly opposed to this measure. His concern was that a “premature focus on Jerusalem” could “undermine negotiations and complicate the chances for peace.” (Sound familiar, now, 22 years later?) 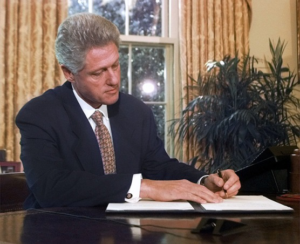 Maintaining that the law was unconstitutional —because “the Constitution vests the President with the exclusive authority to conduct the Nation’s diplomatic relations with other States” and that “Congress cannot trammel the President’s constitutional authority to conduct the Nation’s foreign affairs and to recognize foreign governments by directing the relocation of an embassy”—he threatened to veto the law.

To circumvent this threat, Congress then added a Waiver clause to the law:  Essentially, it allows the president to suspend for a period of six months the limitations set forth in the law with regard to fiscal penalties, if he determines and notifies the Congress in advance that “such suspension is necessary to protect the national security interests of the United States.”

Needless to say, the issue of “national security” is broadly interpreted.

The revised Jerusalem Embassy Act then passed with a large majority – although I believe Clinton declined to sign it.

And this, then, is where we have stood until now. The Clinton, Bush and Obama administrations have all utilized this Waiver to prevent establishment of the embassy in Jerusalem.

So did Trump, in his first year in office.

Today the president explained that this move is long overdue. It’s time for people to open their eyes and try a fresh approach, instead of drawing on the same failed strategies.

The president said this now, and many commentators and politicians are saying exactly the same thing: As long as the Palestinian Arabs delude themselves into imagining they can have Jerusalem, they will not deal realistically.

Jerusalem is the heart of one of the most successful democracies in the world, declared Trump.  To acknowledge it as Israeli’s capital is simply to recognize reality.  It is the right thing to do.

The president said other things, as well, regarding his continued hope for peace.  But I want to leave that for my next posting.

Here, I simply wish to express my admiration for his courage and his clear-sighted perspective. He did this in the face of Arab threats and intimidation, and he was not deterred.

We will have to wait for the dust to settle, metaphorically speaking.  We will encounter some violence here in Jerusalem, for certain.  How much remains to be seen.  In the end, as I had indicated earlier, I believe matters will settle down.

In fact, it is my expectation that in time, the president having forged a new path, others will follow.