From Israel: Let There Be No Mistake!

Had I not been busy with Pesach, I would have written this sooner.  Now that I am at my computer, it is my intention to get this out today:

It is imperative to move past biased media reports and Hamas PR, so that everyone can understand with some clarity what went on at Israel’s border with Gaza on Friday, during what had been billed as a “peaceful protest” called the March of the Return.
~~~~~~~~~~
The “protest” was not remotely a grass roots demonstration: it was conceptualized by Hamas, which, according to Defense Minister Lieberman, spent $15 million on its planning and execution.

Money was spent on recruitment in mosques, schools and on the street; recruitment was further done via TV, radio and Facebook.  A major expenditure was the preparation of tent camps for the protestors — leveling the ground and preparing embankments (picture below), laying water pipes, placing portable toilets, erecting the tents, and building access roads to the tents.

On Friday, following the Friday sermon, which was delivered near the security fence, bussing of tens of thousands was done from all the mosques of Gaza and elsewhere to the six areas designated for the protest (one for every district of Gaza, including Khan Yunis, Rafah, and Gaza City). All protestors were provided with meals and medical services were available at the sites. 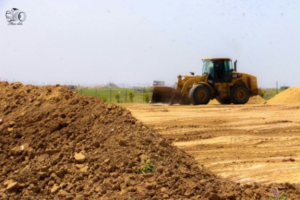 When you remember that the people of Gaza are in the throes of a humanitarian crisis it puts the Hamas “expenditure” into perspective.
~~~~~~~~~~
Columnist Abdallah Al-Hadlaq – writing in the Kuwaiti government daily Al-Watan – harshly criticized the march, which he alluded to as Hamas-run and “provocative.”  Such activities, he said, are in violation of Shari’a and use methods Islam does not accept.

Al-Hadlaq referred to Hamas’s “call for women and children to lead the terrorists and inciters in breaching the Israeli border fence…. “

And indeed, as terrorism-info.org.il reported (emphasis in the original):

“Arij al-Ashqar, a member of the march’s committee for women’s affairs, said efforts were being made to recruit as many women as possible to participate in the events…He said women were full partners in the struggle and they would march at the head of the crowds.”
~~~~~~~~~~
In advance of the “protest,” it was said that people were going to peacefully camp by the thousands on the Gaza side of the security fence at Israel’s border, in order to demonstrate their desire to return to “their land.”

Understand first, please:  “Return to their land” means the full eradication of Israel – which on the face of it is a seriously hostile declaration of intent.  Yahya Sinwar, the Hamas leader in Gaza, stated in a speech on Friday that:

“The March of Return… will not stop until we remove this transient border. Friday’s protests mark the beginning of a new phase in the Palestinian national struggle on the road to liberation and return [of Palestinian refugees and their descendants to their former homes inside Israel].

“March of Return affirms that our people can’t give up one inch of the land of Palestine.” (Emphasis added)

https://www.timesofisrael.com/hamas-is-your-pharaoh-israeli-military-liaison-tells-gazans/
~~~~~~~~~~
However, no one, not the most radical of the Hamas terrorists, remotely imagined that what they were planning would result in wresting land from Israel.

As Prof. Hillel Frisch explained before the event:

“The immediate objective of the prospective fence-stormers is not so much to kill Israelis (though if that can be achieved, even better), but to get killed themselves. Their hope is that Israel will resort to force to maintain the border (as would any sovereign state) and thereby create the graphics and funerals that delegitimize Israel.”

Hamas had set up a media center on the Gaza side of the Erez Crossing, so that nothing would be missed.

According to the satellite TV channel Filastin Al-Yawm, as reported by terrorism-info.org.il, the public was called upon “to rush forward until they were face to face with the soldiers, and even to try to take their guns away.”
~~~~~~~~~~
Some 30,000 plus people did congregate near the fence.  According to Defense Minister Lieberman, a very high percentage of those participating were “Hamas officials or activists who are paid salaries by Hamas, together with their families. The simple people didn’t come.”

They came, charged Lieberman, disguised as non-violent protesters but they were armed and had intention to “harm our sovereignty.” 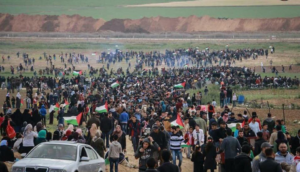 Before long, violence erupted.  It is described by HonestReporting (all emphasis in the original):

“According to the IDF and multiple videos, the violence began with burning tires, slinging rocks, throwing Molotov cocktails and other varieties of firebombs. The correct word for this type of activity is a ‘riot.’

“The violence quickly escalated to live gunfire on the IDF. Firing on a country’s army is typically called an ‘act of war.’

“Under the cover of live fire and the smokescreen from burning tires, armed terror organizations were attempting to breach the border and cross into Israel with weapons. That is called an ‘attempted infiltration.’”

There is no sovereign country in the world that would tolerate violent attempts to breach its border.
~~~~~~~~~~
In the end, 17 people were confirmed dead, killed by IDF forces, and appropriately so.  The charge that Israel simply took down innocent civilians is false.  Of the 17, all are confirmed young males of military age, and at least 10 have been identified as terrorists. 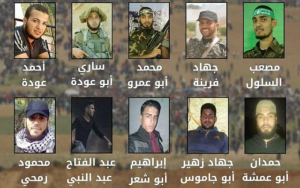 It is highly ironic that Hamas has been criticized by some Palestinian Arabs for announcing that five of those killed belonged to Hamas’s military wing, Izz ad-Din al-Qassam Brigades.  What they said was that this was “playing into Israel’s hands.”  What they meant is, “Dummies, you’ve given evidence that what Israel is claiming about the protest is true.”

https://www.timesofisrael.com/hamas-accused-of-playing-into-israels-hands-in-wake-of-gaza-protest/
~~~~~~~~~~
Before the “protest,” IDF Chief of Staff spoke about preparations (emphasis added):

“We are reinforcing the barriers and a large number of IDF soldiers will be stationed in the area to prevent any trespassing attempts into Israeli territory. Our main goal is to prevent civilians, especially women and children, from being harmed. We are adamant about preventing any incidents.

“We have deployed more than 100 sharpshooters who were called up from all of the military’s units, primarily from the special forces.  If lives are in jeopardy, there is permission to open fire.”

http://hamodia.com/2018/03/28/idf-chief-warns-live-ammunition-may-used-quell-riots-gaza-border/
~~~~~~~~~~
It is difficult to confirm the number of wounded, as the source of this information is the Gaza Ministry of Health, which is controlled by Hamas.
~~~~~~~~~~
There are videos out there that purport to show Israel shooting young people in the back, and otherwise attacking Palestinian Arabs inappropriately. You may have heard of Pallywood: videos that have been faked or doctored to make Israel look bad. We are seeing these videos now, and I advise caution in believing everything that is put out, even if it seems real at first blush.

See this at Israellycool as example:

http://www.israellycool.com/2018/04/01/about-that-video-of-the-palestinian-teen-shot-in-back-another-pallywood-production/
~~~~~~~~~~
Minister Lieberman is adamant that Israel will not cooperate in any investigation of what happened at the border with Gaza on Friday because Israel has done no wrong.  I salute him for this.  It is reasonably certain there will be attempts to force Israel into answering for her defense of her sovereignty in international forums. He has praised the IDF for having “carried out its work in the best possible way.”

Each of you can help by spreading this information broadly.

It is almost a certainty that we have not seen the last of the “protest.”  But as Hamas vows there will be more to come, Lieberman warns that the army “can respond much more harshly next time.”
~~~~~~~~~~