Just a brief message before I tell you WHAT doesn’t exist:

Those of you who read my postings regularly may have a sense of how hard I work to put my material together in a fashion that is accurate, informative, and highly readable.

Chanukah is approaching and this seems to me a good time to ask you to consider a gift to sustain my work.  If you decide you do wish to make a gift, please go to the sidebar on the right side of this site.

You can give in dollars or shekels and can use a PayPal account or your credit card.

And while you are on my site, I urge you to review it more broadly: it offers a wealth of information.

To the business at hand:  On Friday, the US House of Representatives passed a non-binding resolution supporting the “two state solution.” 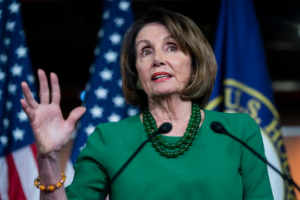 This caused considerable consternation among supporters of Israel. But, in fact, it is not terribly surprising:

The House is controlled by the Democrats. And they are responding to the very appropriate and long-overdue November 18 announcement by Sec. of State Pompeo that the US government has cancelled the Hansell Memorandum and reversed its policy regarding Israel’s presence in Judea and Samaria: the US position now is that the settlements in Judea and Samaria are not inconsistent with international law.

We were bound to see a pushback on this from the left. And I think that this provides us with an excellent opportunity to examine that so-called “two state solution.”

My position is that it doesn’t exist:

The germ of the “two-state” idea can be found with the Oslo Accords, which had been vigorously promoted by the left in Israel.  For the success of the accords, it was deemed important to involve the PLO, which was considered the representative of all Palestinian Arabs.

Thus, Chairman of the PLO Yasser Arafat and his inner circle were brought from Tunis. Whatever image Arafat wished to project, he and his associates were unrepentant terrorists.  The naïve optimism within certain quarters of Israel at that time was that with new circumstances Arafat would move beyond his previous method of operating.  Once that notion took hold, and Israel was committed to working with Arafat, a blind eye was turned, again and again, to the reality of how he functioned.

Israel and the PLO signed on the first stage of Oslo, the Declaration of Principles, in 1993. 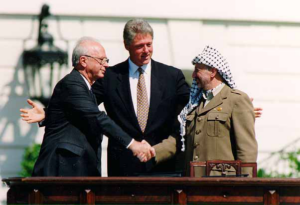 Negotiations on the permanent status of the Palestinian areas were to begin by the third year of this interim period and were to conclude by 1999.  Among the issues to be determined within these negotiations were Jerusalem, borders, settlements and refugees.

“Permanent status”:  Nothing was said in this agreement about a full, sovereign Palestinian state.

On May 10, 1994, mere days after the Gaza-Jericho agreement had been signed, Arafat gave a speech in a mosque in Johannesburg, South Africa, at the invitation of Nelson Mandela.  His talk, given in English, was supposed to be off the record, but a South African journalist recorded it and then publicized it.  That speech includes this:

“The Jihad will continue…

“This agreement I am not considering it more than the agreement which had been signed between our prophet Mohammad and Quraysh.”

Arafat was referring to Muslim history: In 628, Muhammad, who assessed his following as not yet sufficiently strong to take Mecca in battle, forged a ten-year peace treaty—the Hudaibiya Pact—with the polytheistic Quraysh tribe that held the city. The pact “agreed to remove war from the people for ten years…”

Two years after signing, when he had garnered considerably more strength, Muhammad abrogated the treaty and attacked the Quraysh with a force so overwhelming that they surrendered without a fight. Muhammad did this by first quietly preparing while the Quraysh guard was down and then finding a pretext for battle. Desperate entreaties by the Quraysh did nothing to dissuade him.

In Islamic law, the way in which Muhammad conducted himself is viewed as a model of proper behavior when dealing with non-Muslims.

The term for this is hilam – “by stratagems you will make war.”

In 1974, after the Yom Kippur War, it had become evident to the Arabs that Israel could not be “liberated” in one operation.  The PLO then adopted the “Strategy of Stages,” that spelled out a tactic for weakening Israel slowly in stages, towards the aim of ultimate destruction.

Any subterfuge was considered permissible in service of this goal.

One key subterfuge was a pretense of moderation.

Another was a manipulation of public perception that would deprive Israel of legitimacy.

Dennis Ross, who had served as special envoy during the Clinton administration, later said this about Arafat:

Every agreement he made was limited and contained nothing he considered irrevocable.  He was not, in his eyes, required to surrender any claims….he never prepared his public for compromise.  Instead, he led the Palestinians to believe the peace process would produce everything they ever wanted…

We can see, then, that Israel never had a legitimate peace partner. It has all been subterfuge.

Oslo II, which was signed in 1995, divided Judea and Samaria into Areas A, B, and C.  But it did not promise a full sovereign Palestinian Arab state any more than the first agreement did.

Yet somehow public opinion was manipulated so that the world began to see that state as the “right” of a poor, beleaguered Palestinian Arab people:

Two states for two peoples, living side by side in peace and security, with Jerusalem as a shared capital.

This became the publicly enunciated goal, but it was no more than a carefully crafted fantasy.

Not only were there to be two sovereign states within this fantasy, the parameters of the Palestinian Arab state were fully defined up front:  Israel was to move back behind the 1949 armistice line, which in legal terms no longer existed. It was called the “1967 border,” and eastern Jerusalem – including Jewish holy sites – was to be the capital of that state.

Nowhere in any agreement between the PLO and Israel were such parameters remotely suggested, and yet today the PLO and the Palestinian Authority and their supporters assume this is as the given starting point for “two-state” negotiations.

The proof that the Palestinian Arabs are not sincere when they talk about “two states” lies with the fact that a final peace treaty has never been signed.  The PLO cannot sign such a document because it would call for “end of conflict,” and they intend no such thing.  Any agreement struck with Israel is intended only to weaken Israel to make further defeat of Israel more possible in the future.

Always, the Palestinian Arabs find an excuse to walk away from an offer.

Arafat, and after him Mahmoud Abbas, who is no less a terrorist, have broken every major commitment of the Oslo Accords—most notably in terms of dismantling terrorist infrastructure and ceasing incitement.

A promise to do these things comports well with the desire for acceptance by the West.  To actually do them would be to undermine the possibilities for achieving the final goal.  The potential to do violence must be retained as a weapon to be used when needed.

For a long time, pressure was applied on Israel, to “make gestures for peace,” every time the PLO failed to come through.  This was precisely the wrong approach, for such gestures are seen by the Arabs as weakness and invite further intransigence and more terrorism. It is a little known statistic that more Israelis have died annually in terror attacks since the signing of Oslo than died annually before.

Today, thankfully, we’ve moved beyond this:  The majority of Israelis, both leadership and the electorate, is opposed to a “two-state solution.”

The Oslo Accords in no way prevented Israel from building in Area C (which is where all of the settlements are).

And what it is most important to keep in mind is that according to international law, the land belongs to Israel.   (I have made this case many times and will undoubtedly return to it again.)

They are delusional: We are speaking of a political entity whose president has celebrated the 14th year of four-year term of office and who insists that paying salaries to terrorists in prison is its first priority.

Or perhaps they are not delusional, but simply spout these terms as cover for the bankrupt position they espouse.