From Israel: If We Will It

Theodor Herzl is well known for his observation that, “If you will it, it is no dream…” (im tirtzu ein zo agada). 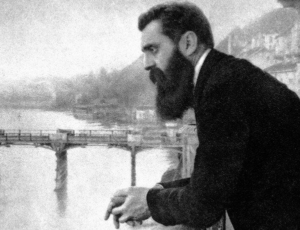 It was 120 years ago, from August 29 to August 31, 1897, that Herzl convened the First Zionist Congress, in Basel, Switzerland.  That Congress – which established the World Zionist Organization – began to promote the settlement of the Land of Israel by the Jewish people “secured by public law.”  Some two-hundred Jews from 17 countries were in attendance.

“At Basel I founded the Jewish State. If I said this out loud today, l would be greeted by universal laughter. In five years perhaps, and certainly in fifty years, everyone will perceive it.”

From that very modest yet hopeful beginning emerged what many would have thought impossible: because Jews willed it and the Almighty blessed their endeavor.

I did not want to proceed today without mention of this.  We are coping with incredibly tumultuous times. Our determination – to be all that we are meant to be, all that we have a right to be – must remain strong.

It’s subtle sometimes, not an “in your face” turnaround.  But I do believe we are witnessing a shift to the right here in terms of asserting our rights to the land.  A couple of examples:

Work on Amichai – the new community for the former residents of Amona who had been evicted – was halted recently at its beginning stages for lack of funds.  The response in many quarters was cynical, with reason – the expectation was that building would never happen.  But as of Sunday, sufficient funds have been released to complete the development of necessary infrastructure.  The Cabinet released 60 million shekels to the Interior Ministry for this purpose.  Minister of the Interior Aryeh Deri had lobbied hard for this.  Presumably we will now see a resumption of construction.

Here you see preliminary work on the site before the halt: 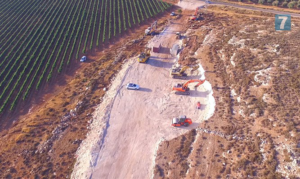 We should not, I will add, be surprised if there are more stumbling blocks resulting from challenges by NGOs on the left.  But hopefully they can and will be overcome – if the will is there.

At the very same time, monies have now been allocated under the umbrella of the National Infrastructure Plan for paving of by-pass roads in Judea and Samaria.  In this case, it was Samaria Regional Council head Yossi Dagan who successfully lobbied for the funds.

When Dagan first learned that funds for the roads would not be included in infrastructure allocations, he said:

“It is inconceivable that they treat us like fourth-class citizens again. We have the right to infrastructure just like any other citizen in the country.”

This is a critical point.  When Israeli citizens who happen to live in Judea and Samaria are treated differently from those citizens within Green Line Israel, there is a distinct political implication: that they don’t belong there, or are only there temporarily.

(In a related effort, equal application of Israeli law to all citizens of Israel, regardless of where they live, is being promoted.  I will have more to say on this.)

Once the release of funds for the by-pass roads was announced by the prime minister, Dagan said:

“…these are the most important roads for security and safety, and for improving the quality of life throughout Judea and Samaria.” 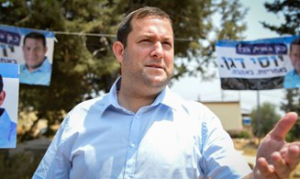 And here a story about the neighborhood in eastern Jerusalem called Shimon Hatzadik – so named because the tomb of Shimon Hatzadik (Simon the Righteous – a Second Temple High Priest) is located there, in a cave. 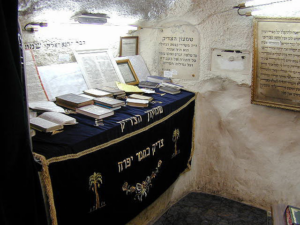 It was a Jewish neighborhood before Israel declared independence – with Jews having purchased homes there as long ago as 1876.  But the Jewish residents were driven out by the Jordanians during the War of Independence.  Thus it became an Arab neighborhood, called Sheikh Jarrah, with Arabs taking over the Jewish homes.  It was a remarkable thing for me to see, as I first did years ago, so-called Arab homes in that neighborhood, with thick stone walls.  In the doorways of those walls was often a niche, where a mezuzah once rested.

In recent years, Jews have begun reclaiming their family homes from squatters.  One such family is the Hubara family, which had long been reluctant to undergo the legal battle that was necessary.  That is, until February 2005, when the daughter of Shimon and Dalia Hubara was murdered in a terror bombing attack.  They decided to take back what is rightfully theirs, and sought assistance in doing so.

It took 12 years, but now the police have evacuated the Arab squatters – who had refused to pay rent and had damaged the home – by court order. The home will need extensive repairs before a Jewish family can move in.

During the evacuation, other Arab squatters, supported by leftist activists, threw cinderblocks at the police and Jewish activists who were present.

“We’ll take these blocks and use them to build even more homes in eastern Jerusalem and elsewhere across the Land of Israel. The Jewish People has returned to its land, despite the stones and knives. We’re here to stay, and we won’t be deterred by harassment.”

I love to tell these stories, which demonstrate Jewish hope and determination in the land. Here is the will.

But I tell it for another reason as well:  to solidify the facts.  It is in situations such as this that the Arabs and the leftists, in spite of a legitimate legal process, often decry the “injustice” and the “cruelty” of the State.

We see this same outcry of “injustice” in the course of an on-going battle with regard to Jewish legal rights in the Land versus the claims of Arabs who have built illegally and their leftist NGO supporters.  It is a fight that Israel must not lose.

Recently Defense Minister Avigdor Lieberman announced that two illegally built Arab outposts were going to be taken down in accordance with Court order.  One is near Susyia in the Hevron Hills. The other is near Ma’aleh Adumim. The fact that they are scheduled for evacuation is good news.

B’Tselem, which is a political NGO posing as a human rights organization, has countered with ludicrous claims against the State, suggesting that relevant Israeli authorities would be tried at the International Court of Justice for this action, which is a “war crime.”  This is ludicrous and will not happen, but demonstrates how heated and irrational the battle becomes.

I wanted to circle back to issues of a most serious nature that I focused on in my last posting:  the presence of Iran on a permanent basis in Syria as part of a permanent truce deal, and the establishment of a Kurdish state in Iraq. The two are related.

When I wrote about the visit Netanyahu paid to Putin to provide intelligence about what Iran was doing in Lebanon and Syria, I mentioned that an Israeli delegation – headed by Yossi Cohen, Director of the Mossad – had also gone to the US with the same information.  There were low key indications I picked up on that the Israeli delegation was unsettled by the US response, which seemed tepid.

Last Friday, US Ambassador to Israel David Friedman gave a lengthy interview to the JPost.  It was a lovely, gracious interview, supportive of Israel on a host of issues. 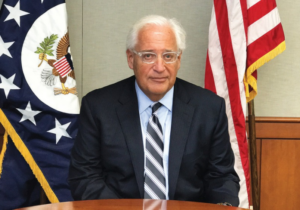 One of the many issues raised was that of Iran in Syria.  Said Friedman, despite press reports to the contrary, the US was “extraordinarily receptive” to Israel’s concerns.  “I think that the Americans fully support the Israeli objective.”

However, noted the JPost, he would not discuss how that objective might be met.  Rather, Friedman continued, “But at least from a macro perspective the Americans and the Israelis are of the same mind.”

Less than a week ago, reports surfaced that “US officials have agreed to let Iranian-backed militias take up positions in Syria less than ten kilometers [as little as five miles] from the Israeli Golan Heights…less than half the originally sought 32 kilometers (20 miles) distance.”

And with this I want to refer to a very important piece by Caroline Glick, “The strategic case for Kurdistan” that ran in the very same issue of the JPost (emphasis added).

“Whereas Prime Minister Benjamin Netanyahu restated his support for Kurdish independence earlier this month…, the Trump administration has urged Kurdish President Masoud Barzani and his colleagues to postpone the referendum indefinitely.

“US Defense Secretary James Mattis, who visited with Barzani in the Kurdish capital of
Erbil two weeks ago, said that the referendum would harm the campaign against Islamic State.

“In his words, ‘Our point right now is to stay focused like a laser beam on the defeat of ISIS and to let nothing distract us.’”

To this, I say “uh oh.”  This “laser-like focus” on ISIS that puts concern about Iran second is very short-sighted.

Glick points out that in keeping that “laser focus” on ISIS, “the US surrendered its far greater strategic interest of preventing Iran and its proxies from taking over the areas that ISIS controlled – such as the Syrian Lebanese border…As Netanyahu warns at every opportunity, Iran and its proxies are moving into all of the areas being liberated from ISIS. ”

What is more, the Kurdish forces, which have given refuge to tens of thousands of Iraqis fleeing ISIS, have been the most competent in fighting ISIS.

The real question the US should be asking, says Glick, is “whether an independent Kurdistan would advance or harm US strategic interests in the region.”

Let me mention very briefly before closing that last week UNIFIL’s mandate was extended by the Security Council, with what are being hailed as some provisions that strengthen it:  an expansion of the force, an increase in number of patrols and inspections, a requirement that reporting be done not only to the Lebanese Army but to the Council itself when the patrols are blocked from doing inspections, and authorizing it “to take all necessary action to ensure” that southern Lebanon is not “used for hostile activities,” whatever that means.

This is being praised in some quarters, and it cannot hurt, as it might shine a light on certain actions of Hezbollah. But I’ve been writing in this posting about “will,” and I am not remotely convinced that any forces in Lebanon have the will to stand against the activities of Hezbollah.

I would love to be able to write in time and say I was unduly cynical here.

But just days ago, Israel charged that an officer in the Lebanese army, Major Yahya Husseini, was a “liaison officer” for Hezbollah, who hands over information to Hezbollah and takes instructions from the terror group in order to increase its influence in the army.