From Israel: How Vile Does It Get?

Late Friday afternoon there was a terror attack by car ramming that took place outside of Mevo Datan, a small community in the northern hills of the Shomron (Samaria).

Two soldiers were killed instantaneously, two were injured, one moderately and one with critical head injury. He has, thank Heaven, stabilized. 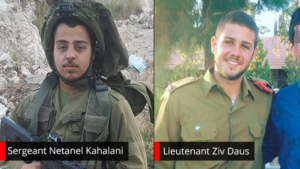 The pain does not go away.

Neither does the horror.  See the remains of the car that was used in the attack and you can sense the viciousness of the attacker: 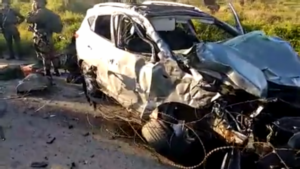 ~~~~~~~~~~
The Palestinian Arab who did this—from the Arab village of Barta’a near Jenin—is in custody.  It’s a sick joke that he first claimed it was an accident, and then, reported the Shin Bet, admitted it was an act with “nationalist” motivation.

What “nationalist”?  This is a euphemism for terror: someone who acts against Jews on behalf of the Arab nation.
~~~~~~~~~~
Defense Minister Avigdor Lieberman has said he would work for the death penalty for this terrorist.  I am not opposed, by any means.

But, as I understand it, it is not a simple matter. There is already a death penalty on the books in Israel that has been invoked only once, for Eichmann. It can be utilized in certain cases but it’s a matter of the prosecution seeking that penalty at the time of conviction – a legal process.

What we are seeing now is a shift in the national attitude, and we may yet see legislation that further encourages capital punishment.

However, it has to be kept in mind that these terrorists seek “martyrdom,” and so this might not discourage them.
~~~~~~~~~~
There is also talk of demolishing the terrorist’s home, but I have very limited confidence in this. Sometimes it does not happen when it is supposed to, and when it does, another home is often built.

Far more effective, in my opinion, is this:

“…the Coordinator of the Government Activities in the Territories, Maj, Gen. Yoav Mordechai, on Friday ordered an immediate and broad suspension on permits for the entire family of the terrorist, the IDF Spokesperson’s Unit announced.

“The suspended permits include 67 for employment in Israel, 26 trade permits, and four employment permits in communities, it added.”

If a would-be terrorist knows there will considerable injury to his extended family, this might serve as a deterrent.
~~~~~~~~~~
But the greatest deterrent would be if the salary paid to the terrorists and their families were to be blocked.  It is this money that motivates them to seek that “martyrdom.”  If there were no more “salary” to be anticipated, then the prospect of a death penalty might indeed discourage them.

Israeli Ambassador to the UN Danny Danon called for the Palestinian Authority put an immediate end to its “despicable pay to slay” policy, which motivates terror.

Do not hold your collective breath.
~~~~~~~~~~
Another term I have no patience with is “lone wolf” attack.  This means the terrorist is not part of a group, not specifically sent by Hamas, for example.  But such terrorists are always motivated in one way or another from within the larger Palestinian Arab society. They do not get up one morning, look around at a peaceful world, and decide to kill, just like that.

The factor of the terrorist salaries is huge. But there was another factor that may have motivated this attack, as well:

A number of Palestinian Arab groups in Gaza, and Judea and Samaria called for a “Day of Rage” on Friday to mark 100 days since President Trump recognized Jerusalem as Israel’s capital.

https://www.timesofisrael.com/palestinians-call-for-fresh-day-of-rage-to-mark-us-jerusalem-recognition/
~~~~~~~~~~
Sadly, although the “Day of Rage” has passed, it may have also influenced a second attack that occurred just today:

An Israeli man of about 30 years of age was stabbed in the upper torso this afternoon, in an attack that took place on Hagai Street, near the Kotel. He is in critical condition.  His attacker was killed by security.

This is the knife he used in the attack: 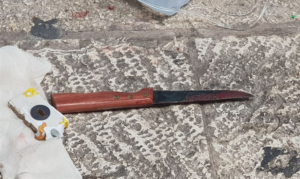 ~~~~~~~~~~
There is a great deal more I wish to write about, but I am keeping this short so I can get it out promptly. As always, I ask that you share this information broadly. People outside of Israel are usually unaware of this sort of information.
~~~~~~~~~~
In closing…

I have written about this again and again, without quite comprehending it: The victims of the terror attacks are often special people.  And we see it again here.

Zev Daus did not originally qualify for combat duty because his profile (indicating a certain level of physical health and strength) was not sufficient. And so he worked on his health situation and built his strength, because he wanted to qualify in order to serve his country.