From Israel: “Hanging on by Our Fingernails??!”

In spite of the title of this posting being potentially ominous in tone, I begin with a brief good news item:  It rained on Tuesday here in Jerusalem, and only in Jerusalem. The rainfall ‒ accompanied by thunder and exceedingly heavy for a brief time ‒ was a real surprise.  The rainy season has not quite begun yet and the forecast had been for sun. 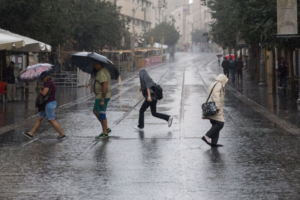 Rain is considered a blessing here in Israel.  May this early advent of rain be the harbinger of a year of many blessings!

As my readers are well aware, I have been moving between postings focused on the US, and others focused here in Israel.  I am deeply concerned about what is happening on both sides of the Atlantic. There is a sense that the world has lost its bearings, although my concern about America is far deeper.

And so, I look first at the situation in the US, as Trump and Biden are about to engage in their final debate and we face an election mere days away.

In order to consider what is so terribly wrong in the US today, we need to backtrack some five months to the death of George Floyd.

What I provide for you here is a video of Floyd’s arrest and subsequent death.  I urge you to watch this if you are interested in the truth.  It is very relevant to present circumstances.

The video is drawn from footage taken from the body cameras worn by the police officers, and from security cameras.  It takes you there directly, on the scene.  What you will see is that Floyd was crazy with drugs, highly uncooperative, quite hysterical, and that the police officers dealing with him were never remotely violent, in spite of the difficulties they faced with him.  They spoke to him very calmly.

You will see that Floyd was saying he couldn’t breathe before he was even touched (the coroner’s report said that his lungs were filled with fluid from the drugs).

And finally you will understand that George Floyd was not murdered by a cop, he died of a severe drug overdose.  You will understand that the way in which the police officer placed his knee against the side of Floyd’s neck and lifted it intermittently did not cut off his air supply, but was intended – per accepted police practice – to restrain him. You will learn that the original coroner’s report, following an autopsy, said he died of drugs, and that the report was revised for what can only be political reasons.

Quite possibly, after seeing this, you will react as I did, and say, BECAUSE OF THIS?

Because of this, the country went crazy with riots and looting and murders, and ‒ which is largely ignored ‒ a huge increase in anti-Semitism?

Because of this, calls went out to defund police, and, while crime rates rose dramatically, police were made to be the enemy?  How stupid does it get?

Because of this, a politically correct racist mentality was fostered in America, with all white people judged “guilty”?

Of course, all of this didn’t really happen because of George Floyd.  He was merely the hook, used by Marxists (the founders of Black Lives Matter have declared themselves to be trained Marxists), extreme leftists and anarchists (such as Antifa) to weaken America and destroy traditional values.

America has been “had.”

They haven’t gone away, these radical forces. They throw their weight around on American streets every day, often violently attacking those who disagree with them.

Very recently in San Francisco, for example, a free speech, pro-Trump advocate, Philip Anderson, leading a group called “Team Free America,” had his teeth knocked out by Antifa and BLM activists.  The attack was unprovoked. 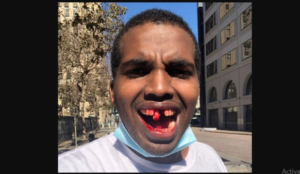 Nor is this attack the only one by leftists against pro-Trump activists:

“Isabella DeLuca, the Outreach Director for the pro-Trump organization Republicans for National Renewal, was attacked by multiple Black Lives Matter and Women’s March far-left activists, after she advocated for confirming Coney Barrett to the Supreme Court.

DeLuca described being assaulted by a geriatric older female in an exclusive statement provided to the National File.

“The first woman was a white older woman – she had…a glittery bedazzled Black Lives Matter shirt,” Deluca told National File. ‘She looked like she could’ve been my grandma, honestly.’

“The Black Lives Matter supporter grabbed DeLuca’s Trump flag, and then when DeLuca attempted to grab it back, the woman punched and choked her…

“…a much younger female leftist arrived on the scene and began joining her older compatriot in hitting, pushing and punching DeLuca.”

DeLuca was hospitalized and given a cervical collar due to her extensive head and neck injuries; she had her lips bloodied, and was also enduring blurry vision and dizziness. 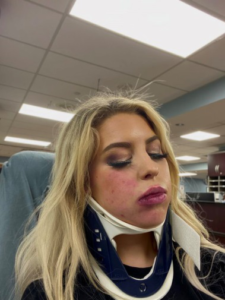 Free speech on campuses is, similarly, a thing of the past.

“A university should be a place where students can be exposed to new ideas, where they can engage freely in debate and discussion. But do college students really feel free to speak their minds on campus? Newly released College Free Speech Rankings show that, at most colleges, the answer is no…

“The survey reveals some startling facts. Almost 20% of students say that using violence to stop an unwanted speech or event is in some cases acceptable. Among Ivy League students, 36% said that it was ‘always’ or ‘sometimes’ acceptable to shout down a speaker one doesn’t like.”

And corporations are not far behind in their policies.

“Every week brings new examples of CEOs intervening in political, cultural, and social debate. In every instance, the prominent spokesmen for American business situate themselves comfortably on the left side of the political spectrum. Shareholder capitalism finds itself under attack. Not just from socialism but also from woke capitalism… (Emphasis added)

“What is taking place is not a business story but a political one.”

Colin Kaepernick, who insists on dissing America by kneeling instead of standing during the anthem, objects to the flag, which was hand-sewn at the beginning of the founding of the republic, because there was slavery when it was introduced.  He ignores America’s great history, the courageous establishment of a nation that ultimately rejected slavery, at the cost of thousands of lives.

And Nike goes along with this distortion of American greatness.

None of this is remotely OK.  It is frightening.

One particularly disgusting part of the current scenario is the speed with which elected Democrats in the House jumped on the politically correct bandwagon after George Floyd died.  Speaker Nancy Pelosi, who is beneath contempt, went out of her way to honor him.  She arranged for a gilt-painted coffin and presented his brother with a flag that had flown over the Capitol.

Why?  Why treat him as a hero? Floyd was a drug addict who had served eight prison terms, including for armed robbery.  Pelosi sent some terrible messages.

This fawning behavior was distressing from the get-go, but the worst part of the spectacle was when members of Congress went down on a knee for Floyd, Kente cloths draped around their necks.  (Kente cloths, as it later turned out, are woven in special traditional patterns by the Ashante people in Africa, who once practiced slavery.) 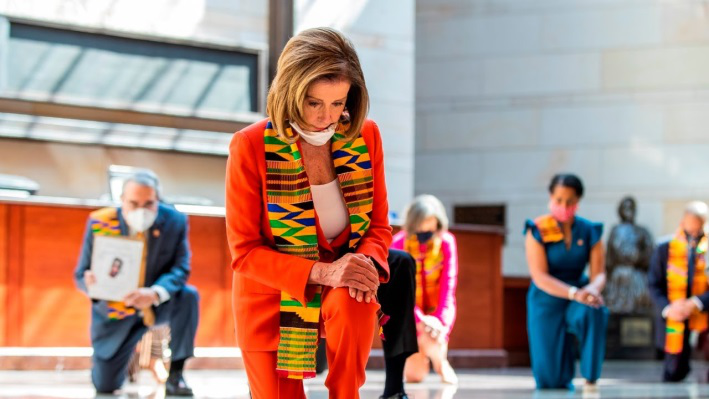 They should be ashamed of themselves, these members of Congress, for having done that, yet they are too devoid of principle, too busy sucking up, to consider the broader implications of their actions.

Integrity is a thing of the past for these people.

What we can hope is that many of the citizens of America are ashamed (and enraged) that elected members of Congress have behaved thus.

Every American citizen who can still think clearly should rise up and say ENOUGH, and vote for a Republican president and Republican Congresspersons.

This is not about Trump, but rather about traditional American values.

It is likely the last chance to save America.

As to Israel, I continue to grieve over the sense that a badly needed unity is lacking in the country.  I’ve written about this before:  Our leaders are focused on political issues (involving them personally or their parties) rather than the good of the country, although they will certainly tell you that their positions are for the good of the country.  They snipe at one another instead of cooperating and compromising.  “I won’t cave to his demands,” is the sort of defiant declaration we hear.

MKs and representatives of various agencies involved with corona cannot decide what steps to take to open the lockdown safely.  The disagreements are shared in the news, increasing confusion and diminishing confidence in government.

All of this generates a malaise and pessimism.

The politically-fueled fight over the budget (one-year vs two-year budget) remains, with Netanyahu (Likud) pushing for one and Gantz (Blue & White) for the other.

With the corona numbers abating (let it continue!!) the prospect that we will see an election in coming months increases.  It is likely to be called in December, if not sooner, with voting three months hence.

What we’ve got now is not working – people call this current unity coalition the worst government in Israel’s history – and so it becomes time for corrective action, as unpalatable as yet another election may be.

Naftali Bennett (head of Yamina, in the opposition) continues to gain in popularity.  Many are convinced that Netanyahu’s time is over, and that Bennett is equipped to take the helm.

“Since heading to the opposition, Bennett has relentlessly and pointedly attacked the government’s handling of the pandemic.

“The strategy has made Bennett appear as one of the few responsible politicians interested in seriously addressing Israel’s most serious problem. Meanwhile, Netanyahu’s other opponents—both from within the coalition as well as the opposition—continuously bicker over tactical political maneuvers and the prime minister’s fitness to hold office while on trial for questionable corruption charges.”

This, my friends, is not bad news at all, but holds out the promise of better days here in Israel: a more peaceful time with true direction.  It is potentially very good news. 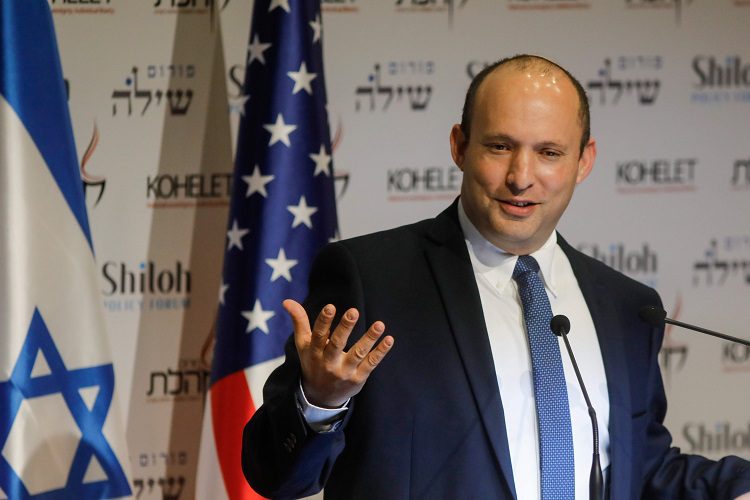 I hope to discuss the growing relationship Israel has with Arab/Muslim states in my next posting.  It is a major story.