From Israel: Eyes Ahead, part 2

Yesterday I moved to get a posting out without delay, in order to begin to provide perspective on the election.  But of course there is more.
~~~~~~~~~~
Before I proceed with that election perspective, and related issues, I want to simply express my horror at the Wednesday night killing of 12 people in California, in a nightclub frequented by college students.

The full story here has yet to emerge, as I write, but America is in deep trouble.
~~~~~~~~~~
In my first post about the election results, I neglected to mention that Michigan’s Rashida Tlaib – a Palestinian-American woman whose Arab parents emigrated from Samaria – has secured a seat in Congress. 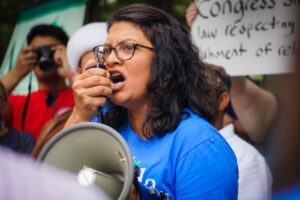 Her politics are about what we would expect: a vocal critic of President Trump, she was arrested two years ago for disrupting a Trump speech.

What is deeply disturbing is that during her victory celebration, she wrapped herself in the Palestinian flag, not the Stars and Stripes.  You can see it in the video here:

Opposed to military aid to Israel, she declared:

And so, we see she is also a liar – but the sort of liar with authority now, whom people may believe. In point of fact, Israel’s citizens are roughly 20% Arab Muslin; they have the same rights as every other citizen.  And Israeli Jews come in every skin color (not all Jews are white!), all treated equally.

In celebrating her victory, Rashida spoke about how delighted her relatives in the West Bank are.  Israel National News (in the link above) refers to her uncle, who lives near Jerusalem in Beit Ur Al-Fauqua, “the source of frequent rock and firebomb attacks on Israeli commuters.”

PoliticoMagazine refers to her as “the Left’s way forward.”

This is scary.
~~~~~~~~~~
A second Muslim woman, this one in Michigan, was elected to Congress.  Ilhan Omar is a refugee from Somalia, who made it to the US at 14.  She will be taking the seat of Keith Ellison (who was the first Muslim in Congress). 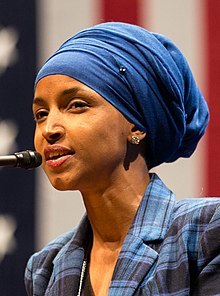 We can trust that she won’t be promoting Somalia.
~~~~~~~~~~
As I have mentioned Ellison, let me come back here to the Louis Farrakhan issue.

Not so many years ago, a relationship, even a casual one, with this virulent anti-Semite was a matter of secrecy. Not long ago, a photo of Obama posed with Farrakhan that had been taken some years ago surfaced (below, with Farrakhan to the right); the photographer said he had been asked not to make it public because it would have hurt Obama’s political career. 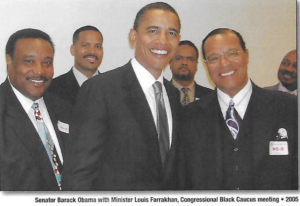 Today there are public figures who have no compunction about being publicly associated with, or even praising, Farrakhan.

https://www.timesofisrael.com/louis-farrakhan-warns-against-satanic-jews-in-chicago-speech/
~~~~~~~~~~
Among those who openly and defiantly praise him are leaders of the Women’s March Linda Sarsour and Tamika Mallory (pictured below with Farrakhan).  Mallory was present at a speech Farrakhan gave in February.  During that speech, he said: “…the powerful Jews are my enemy.”  And then: “….”Satan is going down.  And Farrakhan, by God’s grace, has pulled the cover off of that Satanic Jew, and I’m here to say your time is up, your world is through.” (Emphasis added)

It was reported that Mallory gave him a personal shout out at the speech.  Not only has she refused to disavow him, she will not criticize him.  This, we are told is because she applauds his work in the black community.  But it does not nearly suffice as a reason: Those who assume positions of leadership should be modeling ethical behavior. 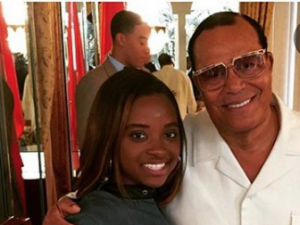 At the same time, Sarsour adamantly refuses to criticize Mallory: “I stand with Tamika Mallory every day, with every fiber of my being because she has so much of what we need in the movement right now to win.”
~~~~~~~~~~
What makes this all the more offensive is the fact that from the left come outrageous charges against President Trump that he is anti-Semitic or fosters anti-Semitism. Trump they criticize, but not Farrakhan.  There is something very wrong here.
~~~~~~~~~~In the midst of this, there is a ray of light.

Actress and activist Alyssa Milano, who promoted the #MeToo movement last year, has now said she will not agree to speak at the next Women’s Movement if Sarsour and Mallory are still running it.

“Unfortunate that none of them have come forward against him at this point. Or even given a really good reason why to support them.”

We need a great deal more of this sort of integrity demonstrated by public figures. And if they are reluctant to demonstrate that integrity, they must be called on it.
~~~~~~~~~~
Turning back to the election, I close with an analysis by Michael Wilner, who says “Trump retains power where it matters”:

“Armed with an even greater Senate majority, Trump will continue to appoint judges, and, with requisite openings, Supreme Court justices – a high priority…

“He retains the freedom to fire Justice Department officials who are acting independently of him by investigating his presidential campaign and administration, knowing full well that their replacements face confirmation in a Senate now more beholden to him than ever before…

“And he will face no meaningful headwinds on foreign policy where, as it is designated, the limited constitutional powers of Congress only come to bear as a check on a president when his opposition party controls both chambers of Congress…

“While new leadership in the House will dominate headlines for a period, soon a raucous Democratic presidential primary will take up its oxygen. Democrats will appear at war with one another, while Republicans…consolidating their rural base, will rally behind an incumbent who has successfully cast the party in his own image.

“Politically, midterm turnout suggests that the president faces few risks in the run up to 2020.  While the House is empowered to impeach him, it is only the Senate that can remove him; otherwise it will be up to the voters. And history is on his side there, as well: former presidents Bill Clinton and Barack Obama both lost far more House seats two years into their first terms and went on to win reelection.” 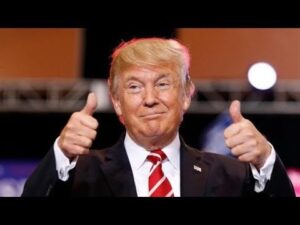