From Israel: “Do Not Hold Your Breath, Folks!”

It appears that we are a “go” for the unity government.  For now: I have yet to speak with anyone who believes that the new government will last anything near its full term.

Last Thursday, the High Court – in a unanimous vote by the expanded panel of 11 justices – threw out all petitions regarding Netanyahu’s ineligibility to form a new government.

Chief Justice Esther Hayut (pictured) indicated, however, that the agreement was “highly unusual,” and said that some of its elements “raise serious difficulties.”

What the court ruling actually said was that there was no reason to intervene “at this time.” Thus was room left for future intervention. 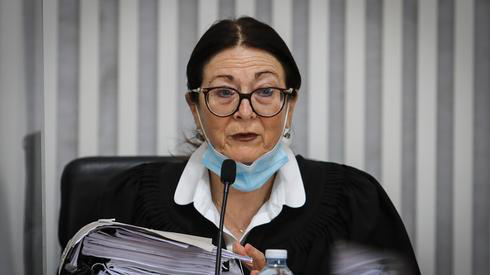 It is a given that we are going to see petitions brought to the Court challenging some of those “highly unusual” elements.  And so we do not know how this will play out over time.

And yet, here we are. As soon as the Court cleared the way, the Knesset began the process of passing a legislative package – focusing on some changes in the Basic Law – which would enable formation of the unity government. It was done “chik chok” – very speedily.

Following this, in short order, 72 MKs signed a document asking that Netanyahu be selected to form a government, after which, within hours, President Rivlin formally tasked him with doing so. 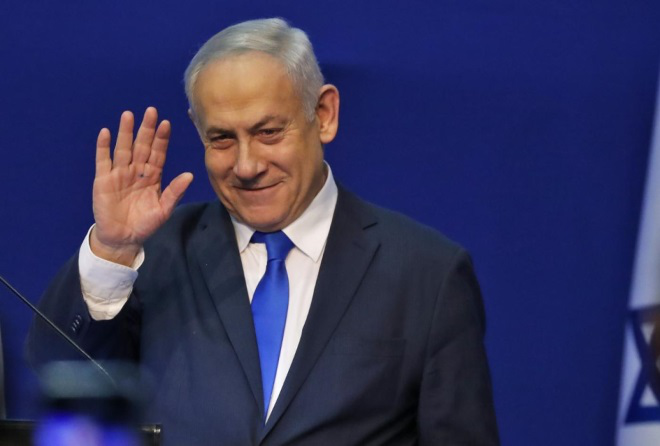 Those signing on that request were from Likud; Blue & White; two members of Labor – Amir Peretz and Itzik Shmuli, who are joining with Blue & White (while Merav Michaeli refuses to participate); Shas; United Torah Judaism; and Derech Eretz – Zvi Hauser and Yoaz Hendel.

Orly Levi-Abakesis – who is the Gesher party – did not sign, although she likely will be part of the coalition.

The participation of the six members of Yamina, who did not sign, is doubtful.  Reports are that Yamina is going into the opposition, but nothing is certain until all deals are done.

And I note here just in passing that the big talker, Avigdor Lieberman, who clamored for a unity government, is not participating.

Time and again it has been said that Netanyahu’s political career is finished, and now, as before, this has proven to not be so.  Some see him as a political miracle-worker; he certainly is the smoothest and most savvy of politicians. He had two weeks to form a government, but the unity agreement was already in place so that he was ready to move on.

Netanyahu and Gantz – who will share the role of prime minister, 18 months for each – have announced that swearing in will take place on May 13 or 14.  After this happens, I will return to this issue, to examine particulars.

All assignments – ministers, deputy ministers, heads of important committees, etc. – have not yet been made and there is considerable jockeying for plum positions.  The fact that Netanyahu promised a significant number of those positions to other parties in order to draw them in has left Likud members (who will constitute roughly half of the coalition) with an insufficient number of positions to assume.

While we await final results on the government, I want to shift focus. Because of the coronavirus crisis and the electoral mess, there has been reduced attention in my postings, and in the news generally, paid to other matters, some of which are of major import for Israel. It is time to take a closer look.

The IDF, and Defense Minister Naftali Bennett (pictured below at left with Chief of Staff Aviv Kochavi next to him), have not been passive during this time of lockdown.  Quite the contrary.

Over the last few weeks Israel has been stepping up attacks on Iranian installations in Syria.  At the end of April, Bennett declared that:

“We have moved from blocking Iran’s entrenchment in Syria to forcing it out of there, and we will not stop.” 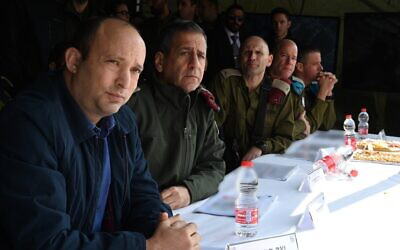 There was a time when this would have been considered impossible, but that apparently may no longer be the case.  I certainly salute Bennett for his vigorous approach.

Last Tuesday, there were reports from Israeli defense officials indicating that Iran was pulling out of Syria.

The officials said that Iranian forces have begun leaving the country, evacuating a small number of military bases previously under their control in the process.

One source indicated that, “For the first time since Iran entered Syria, it is reducing its forces there and evacuating bases.”

“We are determined, more determined [than Iran], and I can tell you why — for Iran, Syria is an adventure happening 1,000 kilometers away from home. For us, it’s our lives.”

Yes, certainly Israel’s efforts have achieved partial success.  Yet this is not the case just in the short term, but over the course of years:

The partial success of Israel’s military efforts in Syria, “…may be discerned by the absence in Syria of the kind of missile and rocket infrastructure with which Tehran has managed to equip its Hezbollah franchise in Lebanon. Israel’s superior air power, extensive intelligence coverage, and willingness to act boldly against Iranian efforts over the last half decade have ensured this…” (Emphasis added)

What is more, it is not just Israeli military determination that is reducing the Iranian presence in Syria (emphasis added):

“…the Iranian regional project is today in considerable difficulty. US sanctions have sharply reduced the amount of money available for regional goals. The assassination of Quds Force commander Qasem Soleimani has clearly left a large void which has not yet been filled…”

Additionally, “there is evidence to suggest that elements close to the Assad regime are wearying of the Iranian presence. The civil war in Syria is effectively over. There is no military threat to the Assad regime’s existence. Assad’s main objectives today are the return of Syria to his exclusive authority, its reconstruction, and its return from diplomatic isolation…

“The extensive Iranian presence in Syria stands in the way of all these goals. As one source close to Syrian government circles expressed it to this author recently, ‘They’re sick and tired of the Iranians.’”

However, says Spyer, “in accordance with the methodology of the Islamic Revolutionary Guards Corps, the Iranian presence in Syria is deep and multifaceted.

“It includes the creation of proxy forces within the official Syrian security forces – such as the National Defense Forces and the Local Defense Forces. It includes the non-Syrian proxy militias, from Lebanon, Iraq, Afghanistan and Pakistan. There is the direct presence of IRGC and Quds Force personnel. There are homegrown, locally recruited ‘Syrian Hezbollah’ type formations…”

All of this…”has resulted in an existing contiguous area of Iranian control…for the most part woven into the fabric of the Assad regime’s own structures.”

And this is the kicker:

“The nature of this project is such that large parts of it are not vulnerable to Israeli air power, unless Israel wants to also take on the Assad regime, which it does not. The parts that are, and that constitute the most direct threat, have been hit hard and well, and will no doubt continue to be so. Put these two points together, and what you have is something resembling the situation in Gaza writ large – namely, a reality in which Israel strikes periodically at its enemies at little cost to itself, and in so doing disrupts and sets back their plans, without delivering a fatal blow.

“At the current price that Israel is imposing, it is difficult to see why Iran should choose to…pull everything back to Tehran. Of course, the defense minister is privy to information regarding Syria that this author is not. But if an Iranian strategic withdrawal from Syria takes place before next February, it will be visible to all. So we will know.

As of now, there appears to be a discrepancy between the stated goal and the means being employed to achieve it. This discrepancy renders Israeli strategy incoherent.

The simple version of events is frequently more comforting, but in the end may not serve us well.

Jonathan Spyer, has traveled extensively in Syria and elsewhere in the Middle East. He is a journalist, a fellow at the Jerusalem Institute for Strategic Studies and the Middle East Forum, and a freelance security analyst.

Even as we accord the IDF and Naftali Bennett all the credit they deserve, I think we owe it to ourselves to consider his perspective with seriousness. 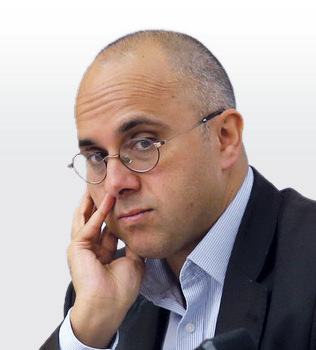 I would like to end with this upbeat Times of Israel blog by Ruth Ebenstein, “I know why the coronavirus ward dances.” It gives us yet another window on how special we are (emphasis added):

“Even during moments of tremendous stress, when the number of patients skyrocketed and the outlook felt bleak, the Keter team — nurses and doctors, cleaners and physiotherapists, social workers and Sherut Leumi (National Service) volunteers, interns and receptionists, orderlies and nursing assistants, security, nursing students, and dietitians — found ways to support each other. They rallied around their coworkers, and very quickly, became a family.”

“I wanted to bring in laughter and fun where I felt it was greatly lacking. I also wanted patients to see that we’re still human, not just medical staff in space suits. I knew that people all over were deeply afraid of the coronavirus. I wanted to capture the notion that there could also be joy within the walls of hospital….

“On April 20, Naftali posted her video, Keter Unit 5’s dance-a-long to the song ‘Happy’ by Pharell Williams. The three-minute video includes all of the staff dancing and shimmying at random moments and in different corners…The lyrics also impart a message of hope.” 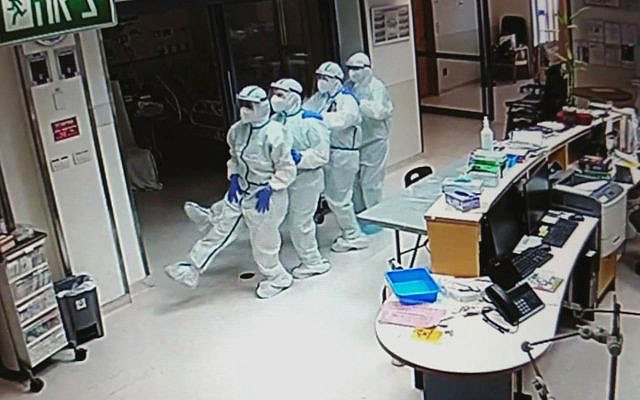