Monitoring the news since my last posting, I have encountered the following and more:

– MK Avigdor Lieberman, until very recently defense minister, said – referring to our prime minister’s comments to the public about it being a sensitive time for security – “I think it’s irresponsible to discuss intelligence information with the public…”

– Minister Moshe Kahlon, who is part of the coalition, said: “I won’t lift a hand to bring down the government.  I think the coalition will fall on its own…”

– Prime Minister Netanyahu chastised Strategic Affairs Minister Gilad Erdan, who is part of Netanyahu’s Likud faction, for saying Israel is “closer than ever” to retaking Gaza. I had thought that Erdan was speaking at the prime minister’s behest, but apparently not.

– Former IDF deputy chief of staff, Maj. Gen. Yair Golan, slammed Bennett, saying: “Minister Naftali Bennett is weakening the army and the State of Israel. It’s a pity he expressed himself as he did, maybe it’s good for his electorate … It’s very sad…The legal issue has never limited the IDF’s ability to act.”

– Minister Bennett, quickly responding that he would not take back what he said, insisted that a “surplus of legalization is costing lives…It’s important for me to say that we have a very serious problem in the defense establishment, which leads to the hands of our fighters becoming increasingly shackled by legal chains.”

— While former defense minister Moshe Ya’alon criticized Golan, saying that, “…it is not right that an officer who is still serving, and has not finished the cooling-off period, will attack an incumbent politician – whether his claims are justified or not.” 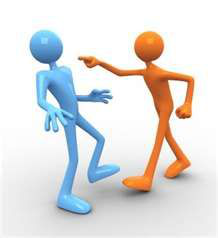 And on it seems to go.  I find it disheartening, troubling, that in these difficult times we are not seeing a more cohesive spirit in the land.
~~~~~~~~~~
And yet, I’m going to look on the bright side, for positive attitudes are still out there – if we but seek them. Hopefully that divisiveness will dissipate.

Here, it delights me to call your attention to an extraordinary op-ed, written last week by an IDF soldier who was wounded in the Second Lebanese war (emphasis added):

“TO BE A part of the IDF disabled veterans is to be part of a larger family of tens of thousands of people in this country, people who are truly salt of the earth. We are a large family in which one’s religion, background and political views are completely irrelevant. People for whom the country is above all else and they have given themselves, in the full sense of the meaning…

“…today is an opportunity to stop for a moment and take a step back from the crazy reality of our country and be united…in the end the country belongs to all of us and we are all part of it, and we have paid a very heavy price for it, and we continue to pay a heavy price for it.  Even if we do not all agree on the path, we all agree on the final analysis: we have no other country. Let us put aside our differences and be united, at least for today.”

https://www.jpost.com/Opinion/To-be-a-part-of-the-IDF-disabled-veterans-572473
~~~~~~~~~~
These wonderful words were written by Yoseph Haddad, an Arab Israeli.  As a member of Reservists on Duty, he has gone into the US to speak truth, in order to combat the lies about Israel told on college campuses. 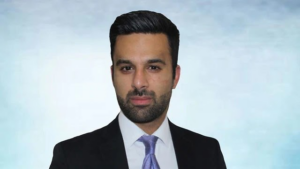 Credit: Love of the Land

~~~~~~~~~~
As I am speaking of lies told about Israel on college campuses, I want to radically switch gears and share some information that illustrates what we are up against and why it is so very important that we unite in standing strong:

On November 18, a group known as Students for Justice in Palestine (SJP) held a closed national conference on the campus of UCLA.  Regrettably, efforts to stop it were unsuccessful.

A group called Students Supporting Israel (SSI) demonstrated outside of the conference, and a couple of SSI members found their way into the conference to make a statement on behalf of Israel (they were ejected).  They are to be commended for their determined attempt to speak up for Israel (although I would have been grateful for an opportunity to provide these good people with additional information to advance their cause).

A video was made of the SSI protest, which can be seen on their Facebook page:

Please see it.  Note that in the conference there were calls for “Long live the intifada.”  This is a call for violence.

Outside the conference, as can be seen in the video, were posters showing SJP activists who had tweeted statements such as: “Let’s stuff some Jews in the oven,” and “We should just stone all the Zionists to death.”

My friends, when I saw this, my blood ran cold.  It is vile enough that there are campaigns against Israel on US campuses.  Campaigns that accuse Israel of being an “occupier” of “Palestinian land,” and that say Israel is an “apartheid state”; campaigns that promote BDS and promulgate lies.

But the vicious and virulent anti-Semitism encountered here is horrendous.  I believe it is something that must be exposed as broadly as possible.
~~~~~~~~~~
It is not difficult to trace the veracity of what was on those posters. Google is enormously helpful here. But what I would like to introduce to my readers is a site known as Canary Mission, which:

“…documents people and groups that promote hatred of the USA, Israel and Jews on North American college campuses.

“Every individual and organization has been carefully researched and sourced…”

Canary Mission has a good deal of material on SJP.  See:

“Students for Justice in Palestine (SJP) at the University of California, Los Angeles (UCLA) is a malicious student group who target Jewish and pro-Israel students on campus….

Individual members of SJP can also be tracked on the Canary Mission website.
~~~~~~~~~~
But there is something that is perhaps even more disgraceful – an anti-Israel group that identifies as “Jewish”: Jewish Voice for Peace (JVP).

This is what Canary Mission has to say about this group (emphasis added):

“Jewish Voice For Peace (JVP) is an American-based anti-Israel organization whose purported mission is to seek ‘an end to the Israeli occupation of the West Bank, Gaza Strip, and East Jerusalem.’

“JVP seeks to drive a wedge between American Jews and Israel and ‘to build Jewish communities that reflect the understanding that being Jewish and Judaism are not synonymous with Zionism or support for Israel.’

“JVP also works to reduce support for Israel from the American public at large and to curtail social, economic and diplomatic support to Israel from the United States government.

“To achieve their goals, JVP staunchly supports and promotes Boycott, Divestment, Sanctions (BDS) movement initiatives in academic, social, and economic institutions. The group provides ‘a façade of Jewish legitimacy’ to BDS campaigns and other initiatives that seek to demonize and delegitimize Israel, and reportedly views itself as the ‘“Jewish wing” of the Palestinian solidarity movement.’

“In 2010, the Anti-Defamation League (ADL) accused JVP of being ‘the largest and most influential Jewish anti-Zionist group in the United States” that ‘uses its Jewish identity to deflect allegations of anti-Semitism leveled against the anti-Israel movement in order to provide it with a greater degree of legitimacy and credibility.’

In 2013, an ADL report claimed that JVP consistently co-sponsors ‘rallies to oppose Israeli military policy that are marked by signs and slogans comparing Israel to Nazi Germany, demonizing Jews and voicing support for groups like Hamas and Hezbollah.’”

https://canarymission.org/organization/Jewish%20Voice%20For%20Peace
~~~~~~~~~~
Jewish Voice for Peace has a rabbinical council, which put out a defense of SJP and its planned conference.  Reading this served for me as a counterweight to the sense that my blood had run cold.  For by the time I was done reading their material, my blood was boiling.

This so-called rabbinical council speaks out against anti-Semitism, naturally. It could not very well overtly endorse anti-Semitism. And it acknowledges that anti-Semitic comments have shown up that are “allegedly” by activists of SJP, but then advances the position that “some of the screenshots [of SJP members putting out anti-Semitic tweets] are fabricated.  How do they know this?  It is their “understanding.”  No independent research – just, so they were told.

Other anti-Semitic tweets, this group says, were written by students before they joined SJP.  In case you wonder how joining SJP helps these students abandon their virulent anti-Semitism, the rabbinical council explains:

“…that is why SJP plays such a crucial role. After joining SJP, students have the opportunity to learn about the difference between Israel and Jews and build profound relationships of solidarity with Jews.”

Profound relationships with Jews who are anti-Israel, obviously.

This attempt to separate Israel and Jews cannot stand.  It is a canard of the most vile sort. Israel is the nation-state of the Jewish people, a legitimate expression of Jewish longing for a sovereign homeland.

Anyone who expresses antipathy to Israel, wishes Israel gone, denies Israel the legitimacy accorded any other state, is anti-Semitic.
~~~~~~~~~~
I felt a responsibility to share this information with my readers. And I hope that you, in turn, will alert others to what is going on here.  Sometimes these groups cover themselves so that people are not quite aware of what they are.

It is six months since the remarkable Miriam Peretz delivered a speech – referred to as “The Speech of the Century” – on having been awarded the Israel Prize.  But I thought now was a good time to share it.

Miriam is a beacon of hope and joy. Please, take the time to listen to this.  You will be inspired, awed, uplifted.  And you will know with people such as this we will be OK. 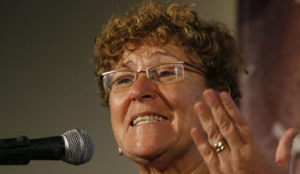