Sometimes all subtleties fly away, and I have to tell it as it is: Damn!!

Another terror attack.  Another innocent victim, a young husband and father of four little ones, killed only because he was a Jew. 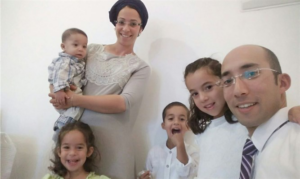 Didn’t we just have a picture like this, of a happy family torn apart by terror???
~~~~~~~~~~
The victim this time was Rabbi Itamar Ben-Gal, all of 29 years old.  Stabbed in the chest at a bus stop outside the city of Ariel, he managed to bang on the door of a bus that had pulled up to the stop, yelling “terror attack.”

Then he collapsed, and was pronounced dead shortly after being brought to the hospital.
~~~~~~~~~~
Here he is a year and a half ago, at the brit milah (ritual circumcision) of his son: 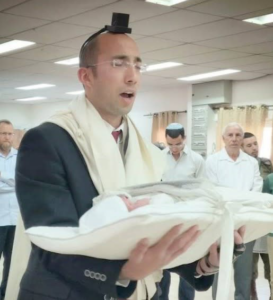 How does one respond to this?

Actually, he was on his way to the brit milah of a nephew (I believe his wife’s sister’s son) when he was killed.

The terrorist’s backpack, with his ID card, was left behind on the ground.  He has been identified as a 19-year old Israeli Arab who lives in Jaffa.  His mother is an Israeli citizen, while his father is from the PA city of Nablus.

Prime Minister Netanyahu vows that he will be apprehended.  There is an extensive search already on-going.
~~~~~~~~~~
We always do get them in the end.  The head of the cell that murdered Rabbi Raziel Shevah was caught this morning in Jenin in a joint Shin Bet, IDF, police operation, after many days of searching. When he attempted to flee the building where he had been hiding, he was shot dead.
~~~~~~~~~~
Please, share this, because people outside of Israel often are not aware of what is happening here.
~~~~~~~~~~
I was going to title this posting “On the One Hand…” in reference to the several mixed messages and confused situations that we are confronting.

However, because I believe it is important to get out the news about the terror attack, I will just touch upon select issues now – with a return to other issues before long.
~~~~~~~~~~
The good news is that on Sunday, the Cabinet unanimously approved retroactive recognition of the unauthorized outpost Havat Gilad in the Shomron.

This follows the terror attack three weeks ago – alluded to above – that claimed the life of Havat Gilad resident Rabbi Raziel Shevah: Israeli leaders pledged this would happen.  (I have read that Rabbi Shevah had close relatives who studied at the Har Bracha Yeshiva where Rabbi Ben-Gal taught.) 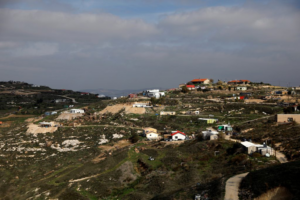 While the news—pronounced long over-due—was greatly welcomed, this vote is not the end of the process: it is a declaration of the beginning of a process.  Infrastructure will now be supplied to the community by the State, and in time full legalization will formally take place.

Havat Gilad is on land that in considerable part was privately and legally purchased by Moshe Zar, on undeveloped State land, and on some land with ownership that is not defined, i.e., does not have clear records.

I would be very surprised if there were not a legal challenge along the way: Much depends upon the sincerity and determination of the government, and this time I believe it will be considerable.

Already Hagit Ofran, of Shalom Achshav, is claiming that the community rests on “Palestinian owned land.”  We’ve seen this before: land that is undefined in ownership, i.e., without clear records, suddenly becomes “Palestinian,” even though no Palestinian Arab has come forward with a legitimate deed.  (Often the left wing organization subsequently “finds” Arab owners.)  The true goal here is not protection of Arab land rights, but preventing Jewish development past the Green Line. If one small portion of the land on which a Jewish community has been established does not have clear records, then a finger is pointed at the entire community.

Havat Gilad was established in 2002 in memory of Gilad Zar—Moshe Zar’s son—a security coordinator of the Shomron Regional Council, who was killed in a terror attack in 2001.
~~~~~~~~
There has been much written in the news in the past days regarding Gaza and the imminence of war with Hamas.

At one point it was implied that the humanitarian situation was so dire, that war might be just days away. This, it was said, would happen because of a breakdown of systems in Gaza that would generate violence, with Hamas seeking to distract the populace by turning on Israel.

Certainly, in a statement to the Cabinet on Sunday, IDF Chief of Staff Gadi Eisenkot predicted that war was likely some time this year if the situation did not improve.

https://www.timesofisrael.com/idf-chief-said-to-warn-gaza-war-likely-if-humanitarian-crisis-persists/
~~~~~~~~~~
Following this, there was talk of the possibility of Israel providing Gaza with direct humanitarian relief in the form of food and medicine for the first time, in order to prevent violence.  Eisenkot made a suggestion in this regard but predicated relief from Israel on Hamas release of bodies of our two soldiers, as well as of three live civilians being held hostage.
~~~~~~~~~
Now Defense Minister Avigdor Lieberman has had the final word on this (emphasis added):

Times are very difficult in Gaza, he declared, and the economic situation has to be addressed, but there is no humanitarian crisis.

He said he was speaking on behalf of the entire defense establishment, including COGAT, the Defense Ministry agency that administers the crossings into Gaza; and the Shin Bet security agency.
~~~~~~~~~~
COGAT oversees the passage into Gaza daily of hundreds of trucks carrying supplies for the residents that have been provided by a variety of sources.  This is something most people do not realize.  Last Thursday alone, more than 12,000 tons of goods entered Gaza via the Kerem Shalom crossing in more than 400 trucks.

It should be noted that this past week, supplies intended for building explosive weapons were detected hidden in with medical equipment that was going to pass through the Kerem Shalom crossing. Everything is checked before it is allowed in; there is even a lab on the site to determine the nature of suspicious material.

http://www.israelhayom.com/2018/02/04/security-forces-foil-attempt-to-smuggle-bomb-making-materials-into-gaza/
~~~~~~~~~~
Leiberman declared that Israel would not impede any internationally funded projects intended to improve the quality of life for Gazans.  However, he said:

“We will not spend a penny from the Israeli budget. I refuse to allow any penny of Israeli tax money to go to the Strip. There are enough wealthy Arab countries…

“We cannot take responsibility for the Strip.”

Lieberman pointed out that Hamas has spent $260 million in manufacturing rockets and digging tunnels just in the past year. The Hamas leadership is unwilling to “divert even a shekel” to fix Gaza’s water and electricity problems, while the terror group’s leaders have electricity “24 hours a day.”

Hamas is sure, he said, that “Israel will blink first” and step in.

https://www.timesofisrael.com/liberman-theres-no-humanitarian-crisis-in-gaza-we-wont-spend-a-penny/
~~~~~~~~~~
US envoy Jason Greenblatt had similar harsh criticisms of Hamas on Sunday:

“Hamas should be improving the lives of those it purports to govern, but instead chooses to increase violence and cause misery for the people of Gaza.”
~~~~~~~~~~
There are, contradictorily, reports that the leaders of Gaza have gone into hiding over fear that Israel is about to launch assassination attempts, promoted by the recent US declaration that Hamas leader Ismail Haniyeh is now on a terror list. 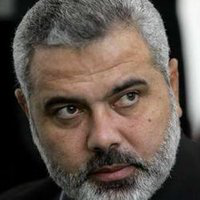 And there is also a report that Hamas fears an Israeli attack — this spurred by major exercises by Israeli paratroop units in the south.  Although there is reason to believe that some of this “fear” may be feigned in an effort to paint Israel as the aggressor.

Israel has no intention of initiating hostilities now. As to assassinations, who know? Not I, although I do think it splendid if they should be afraid.
~~~~~~~~~~
Stay tuned for a good deal more, soon…
~~~~~~~~~~