From Israel: Come Out Fighting!

Figuratively, that is:  with words.

It is what everyone who cares about Israel must do now.  For Israel is being attacked with words and visual images a

Caroline Glick, in her column last Friday, refers to the one card Hamas can play against Israel:  Western hostility, found in the EU and leftist governments, and, significantly, Western media.  (She does not mention, but I will add, certain Arab nations and the UN.)

She is correct with regard to this. I wrote not long ago that anyone who believes the Hamas charges against the IDF at the fence was tilting against Israel.
~~~~~~~~~~
What is startling is how many such people, agencies and nations there are that do still tilt against us.

We conduct ourselves humanely, and with vast concern for struggling people in the world.  We treat wounded Syrian children, and provide support in a variety of spheres around the globe.  You name it:  assisting in agriculture; teaching water conservation; providing medical know-how; rushing in relief when there are natural disasters.

Just days ago, Prime Minister Netanyahu revealed that our superior Intelligence, which has been shared with others, has prevented terror attacks in more than 30 nations.

We are respected, if not celebrated, for these acts.  But sometimes this respect is no more than a veneer; beneath which there still lurks an anti-Israel attitude.  Once we confront a situation such as the one we are currently contending with at the fence – Poof! – good will disappears.

I do not intend to waste precious time mourning the inherent unfairness of the situation.  We must hold our heads high, secure in who we are, and move forward one step at a time.
~~~~~~~~~~
Hamas, says Glick, acts “on the sure knowledge that the Western media, the EU, and the international Left will always side with Israel’s enemies,” and stages assaults that provide those Israel haters with a pretense for condemnation.  (Emphasis added)

What she recommends is that Israel not get caught in the trap: we are set up (provoked into action), she says.  She has a point.  The projected use of those “stink bombs” (which, I’ve learned, are actually filled with sewage), to be dropped on protesters by drone, is an attempt to avoid the trap.

But sometimes, the situation created by the other side makes it inevitable that force will have to be used to protect Israeli citizens or the sovereignty of the State.  And then when we’ve done what we have to do, we will have to contend with the horrific press that follows.

Very likely, you have seen the split screen pictures from last week that show wounded Gazans at the fence juxtaposed against an allegedly callous Israeli government rejoicing at the new US Embassy in Jerusalem. 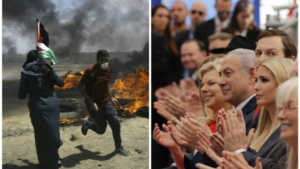 These scenes are not an expression of responsible journalism; they are insidiously designed to paint Israel in the worst possible light.

We cannot let mainstream Western media have the last word.
~~~~~~~~~~
I have written about this issue before, and will likely return to it again.

At this time I want to dismantle one particular lie that has been told about the IDF, with a special tip of the hat to Aussie Dave, who runs Israellycool, http://www.israellycool.com/.

On May 16, a story broke in Canada about a Canadian medic, Tarek Loubani, who had gone to Gaza to help the people at the fence and was ostensibly shot in the leg by the IDF.  He said he thought it was deliberate, because this happened during a time of quiet, and because he was not near the fence.  To make matters much worse, he charged that another medic came to help him and was shot dead:

Without missing a beat, on the same day, Canadian Prime Minister Trudeau went public on this, saying he was appalled that a Canadian medic had been shot by the IDF and calling for an investigation.

https://www.thestar.com/news/canada/2018/05/16/trudeau-appalled-by-shooting-of-ontario-doctor-in-gaza-urges-investigation.html
~~~~~~~~~~
Last night, after Shavuot had ended here, I discovered information on Israellycool that is of significance with regard to this issue.

First, Aussie Dave wrote that the medic whom Loubani said was killed when helping him was actually a member of Hamas:

Then he wrote that the Loubani injury may have been staged.  He draws this conclusion utilizing the picture that was put out by the media of Loubani supposedly in the hospital.  Observations offered by medical personnel whose opinions he sought are quite interesting:

Loubani, it seems, was also a member of ISM and has told other falsehoods about Israel:

Lastly, it turns out that Loubani’s father has been involved with fundraising for Hamas:

http://www.israellycool.com/2018/05/18/tarek-loubanis-father-a-board-member-of-relief-group-found-to-have-fundraised-for-hamas/
~~~~~~~~~~
As you can, use this material to make the case for the way in which Israel is frequently libeled with regard to the Gaza fence issue. Use it to illustrate how important it is that every charge against Israel not be automatically believed.

Use it, in particular, where you see the accusations by Loubani in print.  I hope my Canadian readers will go at this with full vigor – writing op-eds and sending letters-to-the-editor to local and national papers.
~~~~~~~~~~
There were all sorts of dire threats about what was going to happen at the fence last Friday, threats, which, thank Heaven, came to naught.

I have already explored some of the reasons why the violence may have diminished – such as threats by Israel to do targeted assassinations of Hamas leaders.

And there are yet others:

There may be a fear by Hamas leaders that they were edging towards war, which they did not want.  Push Israel too hard, and that might be the result.

There is involvement by Egypt’s President El-Sisi: 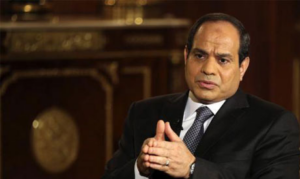 He had originally said he would keep the Rafah Crossing open if the mobs cooled it.  Now I see that he intends to keep it open for all of Ramadan.  This, he tweeted, is to “ease the burdens on the brothers in Gaza.”

Has there been a Hamas promise to keep matters quiet? Or does he reason that keeping it open will have a pacifying effect on the people of Gaza? 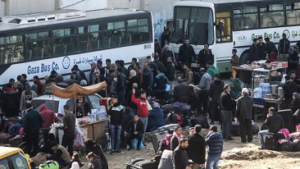 ~~~~~~~~~~
In the last few days we have been in the throes of an oppressive heat wave (sharav).  At the same time, the Muslim Arabs are celebrating Ramadan, which forbids even drinking during daylight hours. That just might have put a damper on enthusiasm to get out there and riot. (Thanks to RM)

We’ll see how this plays out, because once again there are threats:  The organization known as the National and Islamic Forces in Ramallah has called upon the PA public to march on Jerusalem this Friday, to protest Israel’s policy.  A statement they have released says they will “undermine the narrative of the occupation regarding freedom of worship, and to defend the Al-Aqsa Mosque by means of the raging human river.”

Sigh. They do favor hyperbole: A raging human river. And the same call for defending the Al-Aqsa Mosque, which in truth requires no defending at all.
~~~~~~~~~~
Matters at the UN are no better than might be expected at such a time. Kuwait tried to push through the Security Council a resolution condemning the killings of Palestinian Arabs at the Gaza fence and calling for an investigation.  When that failed to go through because of disagreements regarding the wording, the idea of a resolution for an international force to be stationed at the fence was advanced.  This could only have traction as a Chapter 7 Resolution of the Security Council, but this will not happen because the US will veto it.

What is of key interest here is what position the various nations on the Council take.
~~~~~~~~~~
All of this aside, there is good news:

Sky News Arabic reported from Abu Dhabi this morning, citing Syrian activists in Syria who said that there were powerful explosions at an Iranian operations center at the headquarters of the Department of Electronic War, south of the capital Damascus.

It was only a few hours earlier that it had been reported that a large Syrian cargo plane, an Ilyushin IL-76T, had left Tehran for Damascus.  This plane is most frequently used to transport military cargo from Iran to Syria.

No acknowledgement of Israeli involvement, of course.  No mention of Israel in this early report.  Nonetheless, it does lead us to the reasonable conclusion that our Intelligence is still tracking Iran, and our Air Force is still preventing Iranian military equipment from being utilized in Syria.

We can call this an educated guess.
~~~~~~~~~~
And then the happy news of yet another embassy now located in Jerusalem, as Paraguay today dedicated its embassy in the Technological Park at Malcha, the same location where Guatemala opened its embassy last week.

President Horacio Cartes was here for the ceremony and then met with Prime Minister Netanyahu. 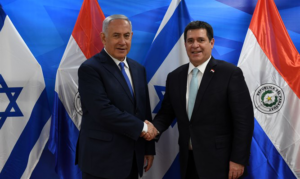 “More embassies are on the way,” Netanyahu later declared at a Likud faction meeting.
~~~~~~~~~~